Be on the lookout for fake Royal Mail 'missed delivery' texts as they could end up costing you a fortune. We talk to a loveMONEY reader who was conned out of over £30,000 by scammers and reveal how to stay safe.

There have been numerous media reports about the Royal Mail 'missed delivery' scam this year, where fraudsters imitate the company in a bid to steal personal and financial information.

Earlier this year, Action Fraud revealed that it was informed of 1,700 such scams – and that's just the ones people have bothered to report to them – so this text scam has clearly been widely shared.

I talk to a loveMONEY reader who was the victim of one such con and will reveal how it works so you can avoid falling for it.

Asda and Morrisons 'out for delivery' text scam: how to stay safe

In late March, Susan (the victim’s name has been changed to protect anonymity) received a text, allegedly from Royal Mail, about a missed delivery.

We have included an example of a fake Royal Mail scam text which a loveMONEY staff member received below to give you an idea of how it looks.

Scammers often send out variations of the same message so you might receive one with different wording and the supposed unpaid amount may vary.

It states: "RoyalMail: Your parcel has a £1.09 parcel fee. Visit: [link] to make payment to avoid it being returned to sender." 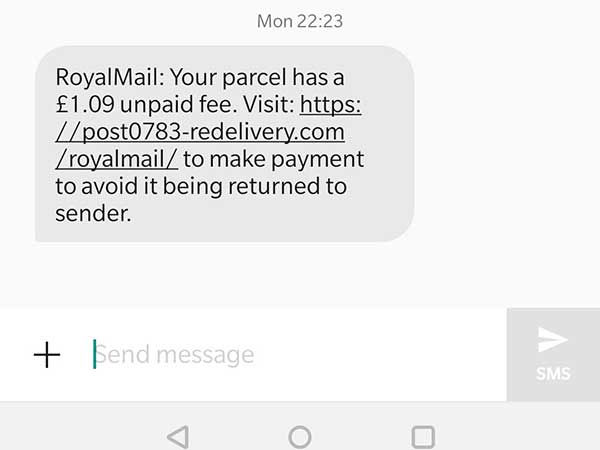 After seeing the message, Susan clicked on the link and filled out her details, including her phone number.

She thought little about the text as she actually recently missed a delivery and thought a charge to rebook it was routine.

Around 9pm that same day, Susan received a call from a private number, who claimed they were from her bank, Halifax, and that someone was attempting fraudulent activity on her account.

Susan was suspicious and said she didn’t know who they were and asked why they were calling from a private number.

The caller apologised, hung up and called again from the number that matched the back of her card.

The caller claimed that someone was trying to use her bank account and set up a direct payment from it. When Susan checked her messages, she noticed multiple messages supposedly from Halifax.

One claimed that there was an attempted payment of £399, while the other informed her of an attempt to pay £1,995.

As Susan was suspicious, she asked the caller many questions about what was happening, and he was very convincing and answered everything.

“They seemed so professional,” said Susan.

When she said she would prefer to go to a branch, Susan was warned that she risked losing everything in her account – and she would have nothing.

The situation was intense for Susan, who suffers from anxiety, and she had a panic attack while talking to the scammers, who tried to reassure her that everything would be okay if she set up a new account.

But she was still reluctant, so she was passed to a ‘senior staff manager’ who was more aggressive – and threatened that the bank wouldn’t be able to get her money back as she allowed the fraudulent activity to happen.

Watch out for these FAKE Royal Mail emails. They've been reported to us over 1,700 times.

We followed the link in one of the emails and here’s where it leads...

Help us remove malicious emails and websites like these by forwarding suspicious emails to: report@phishing.gov.uk pic.twitter.com/cTzc2SFM1y

As Susan was struggling to think clearly due to the pressure, she gave in and agreed to set up a new bank account, which was created under her name.

She was told to provide ID in her local branch the next day.

Susan was then told to transfer money into different accounts, which they claimed would be sent to her new one, adding that someone from Halifax was involved in the fraudulent activity.

This elaborate lie by the scammers was used to make Susan ignore genuine alerts from the bank. By this point, Susan was on the phone for around three hours with the scammers.

As directed by the fraudsters, she used her computer when the mobile banking app would block the transfers due to security measures and was advised on how to label transfers to minimise scrutiny.

“They knew exactly what was on my screen,” recalled Susan.

It’s worth stressing that Susan got two automated calls – which were actually from Halifax that are designed to prevent unauthorised fraud rather than APP scams.

Halifax confirmed that Susan declined one of the calls, which, along with the various suspicious payments being made, resulted in her account being blocked.

Susan rarely transfers more than a few hundred pounds from her account, but that evening, she transferred tens of thousands of pounds.

Unfortunately, her account wasn't suspended until she'd transferred more than £30,000. 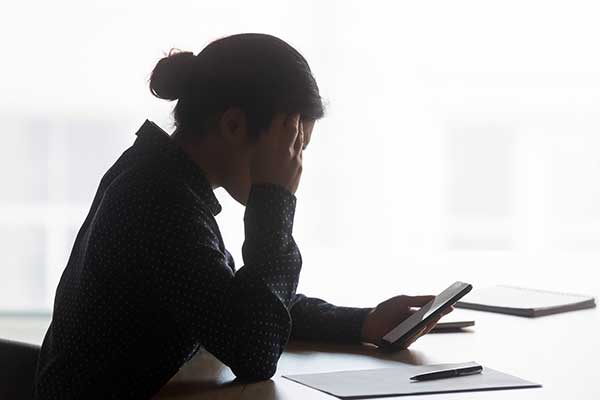 How the scam was uncovered

The scammers then claimed their team could not unblock the account and that she needed to call her bank so another team could do so.

Despite the scammers coaching her on what to say, the advisor thankfully thought something was wrong and pressed for more information.

Susan revealed that she was being asked to transfer money by someone who she believed was from the Halifax fraud team.

When she was asked whether she shared any personal details, Susan recalled the Royal Mail text and was told that it was a phishing scam set up by the fraudsters.

“At the realisation that I had been scammed and I would not be able to retrieve my money back, I became distraught,” said Susan.

The advisor promised to help her, and that the scam would be investigated with a response expected within 15 days.

When the scammers called back to ask whether her account was unsuspended, she hung up the phone.

With the investigation, she said she struggled to get any updates from Halifax and, when she called, was left waiting on the phone ‘for hours’ with no idea who was handling her case.

The scam had a huge emotional impact on Susan, who was continually harassed by the scammers.

Eventually, she turned to loveMONEY for help getting her money back.

How did Halifax respond?

I contacted Halifax about this particularly sophisticated scam and pointed out several things that should be considered by the bank.

First, I felt that the transfers were a huge red flag as Susan has not made such big transfers before.

If Halifax had contacted Susan about the unusual activity, she could have cut off contact with the scammers and not lost as much money.

Also, Susan was vulnerable at the time as she had sadly been informed of a friend’s passing on the day the scammers first rang, which was made worse by her anxiety.

Thankfully, Halifax decided to reimburse Susan in full and offered £70 in compensation after she formally complained about the handling of her case.

“Helping to keep our customers’ money safe is our priority and we have a great deal of sympathy for Susan who was the victim of an impersonation scam,” commented a spokesperson for Halifax.

“We fully investigate each case and while we expect customers to take reasonable care when making payments, we have considered the specific circumstances of Susan’s case and fully refunded the money she lost to the fraudsters.

“It’s important to treat any email, message or call that you’re not expecting with caution and pay close attention to any warnings that may appear when banking online.

“Our bank or a genuine company will never ask you to move money to a different account and if anyone does, it’s definitely a scam no matter how genuine it may appear.”

Unfortunately, fake phishing texts and emails have circulated a lot this year with Royal Mail itself warning about various scams.

For example, fake texts sent by scammers often will claim your package has not been delivered as no custom duties were paid or because you weren’t at home.

Another scam involves a text claiming you missed a package from HMRC and offers a link to reschedule your delivery, while a different one says you need to pay to get a delayed package.

Scammers are also imitating other couriers such as Hermes, so it’s worth being on your guard – and sometimes the timing of these texts can coincide with genuine deliveries.

For example, earlier this year, I ordered a package delivered by Hermes – and was targeted by a scam text only 20 minutes before the scheduled delivery time.

When I quickly compared the suspicious text and the genuine one, I realised it was a scam.

It’s vital that you don’t click on any links on any suspicious texts or emails as scammers often use any information to target you with a sophisticated scam like the one above.

Fraudsters will often call from spoofed numbers and imitate HMRC or your bank to try and con you out of any money.

If you get any calls out of the blue, particularly if it involves suspicious activity or legal issues, hang up and leave the line disconnected for 10 minutes (scammers sometimes keep the line open).

Then call back after looking up the official number yourself. If you want to call your bank, you could also try the emergency hotline, 159, which may be able to connect you automatically to your bank’s fraud team – if they’ve signed up.

While it may be rude to hang up if the caller is legitimate, it’s best to be cautious instead of taking the risk of being scammed.

Sadly, there are no guarantees that you’ll get your money back if you’re scammed.

If you get any suspicious emails from Royal Mail that you think might be a scam, you can report them to reportascam@royalmail.com.