Save money on everything 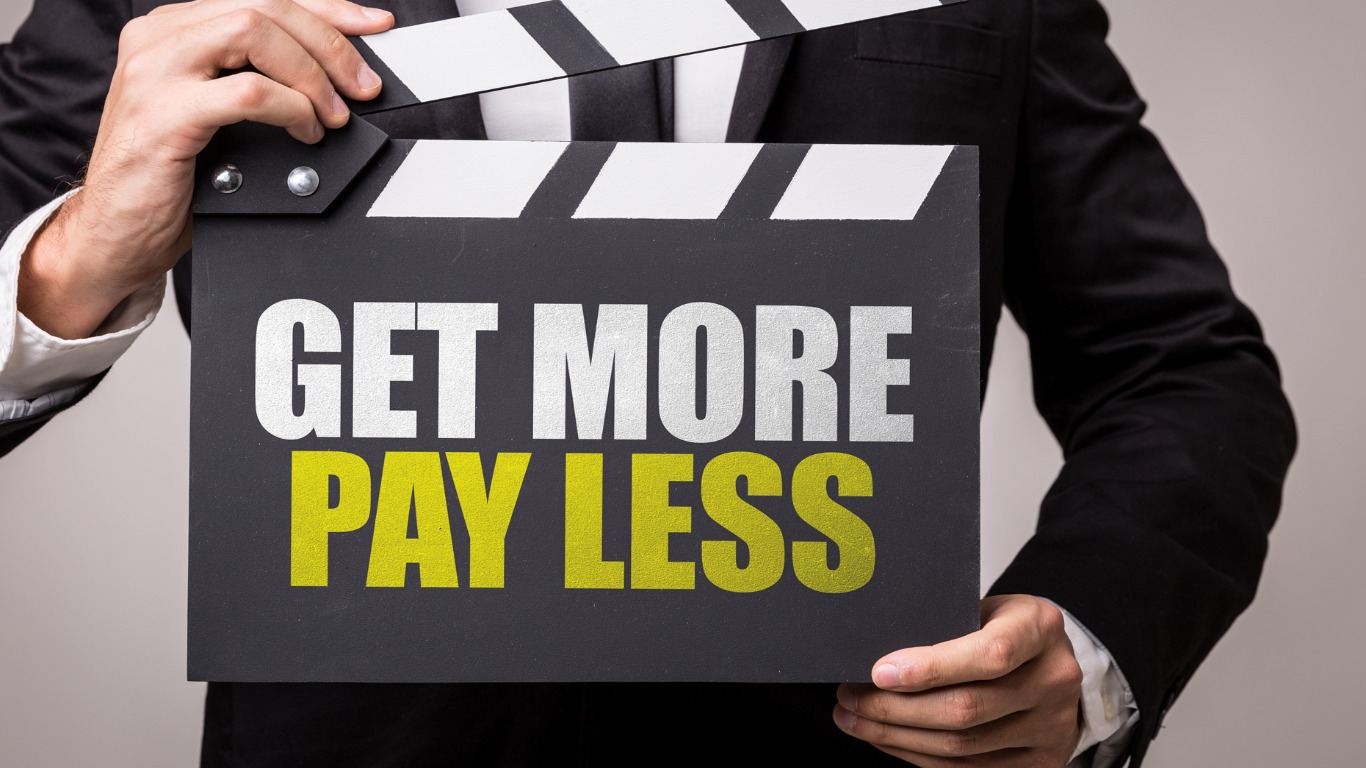 Cost of living survival guide: simple changes that could wipe £1,000s off your bills

Cost of living crisis stretching your budget to the limit? Have a read of our comprehensive guide to getting the best price on everything.

Save on food & drink

You have to eat, but it doesn’t have to cost a fortune. You don’t have to go to extremes to slash your monthly grocery bill: simple changes are all you need.

Start by reading through our top tips for cheap food and drink to see what we’re on about. Shop regularly online? You should also have a look at our guide to the cheapest supermarket delivery deals.

Save on your energy bills

While it might be difficult to switch to a cheaper energy deal thanks to the ongoing energy crisis, you can at least take simple steps to use less of the stuff.

Most of us are unwittingly wasting hundreds of pounds a year because of simple mistakes.

Did you know you could be wasting up to approximately £200 a year if you haven’t switched broadband in the last year?

Data from consumer site Which? in 2019 highlights just how heavily providers are cashing in on those of us who stay put for too long.

What this means is you’ll need to switch regularly if you want to avoid being royally fleeced. That may sound like a hassle, but a few minutes of admin each year is surely worth a couple hundred quid.

One final point on this: given how vital broadband is, it’s worth noting which providers provide the best and worst customer service.

If you find two similarly-priced deals but one is streets ahead on service, that’s probably the one to go for.

What to do next: find a cheap broadband package (you could try Broadband Genie or Compare the Market, but there are others available)* and make a note in your calendar to switch regularly.

*We may receive a small commission if you use either of the broadband providers mentioned, but please know this hasn't influenced our editorial standards at all.

Save on your mobile phone/SIM contract

If you got your phone as part of your mobile phone contract, make sure you switch as soon as your deal expires – whether you want a new phone or are happy to change to a SIM-only deal.

The price of that phone is worked into your monthly payments, so when you hit that vital contract expiration date, you’re effectively paying towards a phone you’ve already paid off. That’s madness!

When it comes to that new contract, make sure you shop around for the right deal – that means doing your research to understand how many minutes, texts and GB of data you use each month then finding the cheapest appropriate offer.

On the topic of data: read this guide to reduce your usage and avoid nasty fees.

It might feel there’s nothing you can do to keep on top of soaring fuel costs, especially for those who drive to work.

The good news is that’s not the case: in fact, we think our guide will help almost everyone save!

As you’ll see below, you effectively need to take a three-pronged approach of finding the best price near you, paying in the right way and then improving your car’s efficiency.

Save on rail fares

With rail fares rising sharply every year, it’s becoming increasingly difficult to get a cheap train ticket – especially for commuters.

That said, it’s not impossible. You just need to be flexible where possible and be aware of certain quirks of the system.

Save on your mortgage

Mortgage rates are rising rapidly as a result of the hefty Base Rate hikes, but that doesn't mean many of us aren't still paying more than we need to on our home loans.

New research from the Financial Conduct Authority found that hundreds of thousands of homeowners are wasting more than £1,000 a year because they're sat on their lender's Standard Variable Rate.

It added 370,000 borrowers could save an average of £1,250 a year over two years, on average, by switching to a best buy mortgage.

Sadly, finding the best mortgage isn’t as straightforward as it could be: a loan with a lower rate could actually be more expensive because there are a load of fees hidden in the deal.

When you’re choosing a mortgage, make sure you compare the total cost rather than simply looking at rates.

Thankfully most comparison sites will allow you to filter results in exactly this manner.

Next, you need to decide whether you want a tracker, offset or fixed-rate mortgage.

It’s worth noting the latter is far more popular these days as they guarantee your monthly repayments won’t rise, but you should ultimately decide what best suits your needs.

The final decision you need to make is what length of deal you want.

Most deals come with an ‘introductory’ rate that then rises after a set period (it’s people who haven’t switched after this window has passed that are most likely to be overpaying).

You’ll typically choose between a two, three, five or 10-year deal, with the best rates rising slightly the longer you choose to lock in for.

Do you want a super-cheap deal that’ll soon expire or would you rather pay a little more for long-term protection? Think carefully about what will better suit your financial situation.

One quick point for those who are already locked into a deal: this doesn’t mean you definitely shouldn’t remortgage due to fear of exit fees.

As strange as it sounds, some borrowers could take the hit of hefty penalties – and they really can be painful – and still end up better off in the long run because the deal they switch to is so much cheaper.

See what’s out there, do the sums, then commit to a deal that benefits you rather than your lender.

Save on holidays & flights

If you are keen to take on the hassle and risk of going on holiday, the last thing you want to do is worry about costs the whole time you’re there.

While bagging cheap flights is obviously important, there are so many other costs you need to keep an eye on to ensure your trip is both enjoyable and affordable.

As any parent will tell you, having a child is not cheap. In fact, one in four say they have cut their work hours because it actually works out cheaper that way.

Thankfully, reducing costs for parents is easier than you might think – and you have far more options than simply choosing an au pair.

Wait! Don't just scroll past this section. It may be boring, but insurance is also important – and expensive if you don’t get it right.

So it pays to spend some time shopping around for policies that are affordable but aren’t riddled with exclusions that mean your policy is effectively worthless.

Yes, it’s frustrating but it really is worth the effort.

Given it’s the financial product we use most often, it’s amazing how many of us simply stick with the one we opened as a teen.

The best accounts can do brilliant things for your finances: you can get paid just for opening one, earn interest on your cash or minimise the costs if you go overdrawn each month.

You can even open more than one account if you like the perks on offer at different banks.

If you’ve racked up debt, it’s vital you take steps to keep that debt under control.

Credit card debt can be particularly dangerous as the interest rates are often sky-high, meaning your debt can quickly spiral out of control.

They allow you to shift the debt (in return for a small fee, which is charged as a percentage of the amount you want to transfer) and enjoy an interest-free window, during which time you can whittle away what you owe.

Choosing one can be tricky: for example, the longest 0% deals aren’t always the best.

That’s because they tend to charge the biggest fees upfront, so it’s often better going for one that might have a slightly shorter 0% period but will cost you a fraction of the fees.

The second thing to be aware of is the best deals are reserved for those with an excellent credit rating, so it’s worth checking your chances of qualifying before applying.

This will help you avoid a failed application, which will further damage your rating and limit your borrowing options.

While balance transfer cards are great at clearing existing debt, they aren’t much use if you have a big purchase coming up that your savings simply won’t cover.

In this case, you’ll need a 0% new purchase card instead. As before, the best cards are reserved for those with excellent credit ratings so be sure to check your chances of qualifying for a card to avoid rejection.

Save at Amazon and eBay

Millions of bargain hunters spend cash with Amazon and eBay every month, but far too few know how to ensure they get the best deal every time.

Depending on which online giant you prefer, we’ve put together a tailored guide to shopping like a pro. Seriously, you’ll save a bundle!

Save at the cinema

Looking forward to your local cinema reopening (depending on local restrictions) and after cheap cinema tickets for yourself or the kids? There are loads of schemes that'll help you bag you huge discounts on trips to the movies.

From buy-one-get-one-free offers to long-term subscriptions, it’s up to you how you want to save.

Save on… your monthly purchases

We’ve covered most of the areas you can make savings on, but not yet delivered on our headline promise to help you save on absolutely everything.

How to achieve this? The key is to get paid a little bit back every time you buy something you need.

In fact, you can get this on anything from a chocolate to furniture to once-in-a-lifetime holidays by using a combination of cashback credit cards and cashback sites.

We can argue for days about whether getting money back on spending is the same as saving, but the end result is your costs will be cut every single time.

We’ve rounded up some of the best cashback credit cards here, while for cashback sites you’ll be hard pressed to beat Quidco and TopCashback.

The key, as we alluded to at the start, is to make sure you aren’t tempted into buying things you don’t really need because of the lure of cashback.