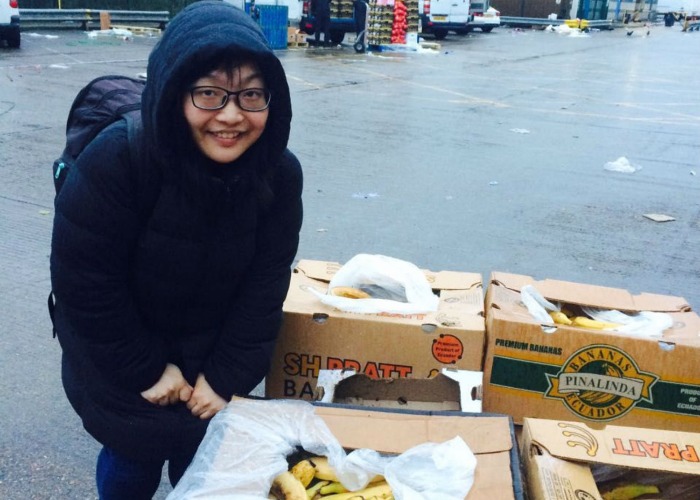 In the UK, we waste a lot of surplus food and it costs us millions of pounds a year. We chat with food waste campaigner Josephine Liang, who spends just £5 a week on food, to find out more about how she saves money by making use of food destined for landfill.

Food waste has become a key issue – not just because of the environmental one, but the financial cost.

According to recycling advisory body Wrap, we throw away £13 billion of food every year despite the fact that much of it is so easily avoidable.

You might remember seeing coverage of Josephine Liang a few months ago – she's the woman who spends £5 a week on food through apps, supermarket yellow stickers and bin rummaging.

She also co-runs Day Old Eats, which sells surplus baked goods from event catering, office pop-ups, and so on.

At the moment, Josephine is doing an ongoing project called Free Tasting, where she explains how to get hold of free food (or at least very cheap) food and effectively tackle food waste.

“It started because I am a food waste campaigner and I realised I’d be pretty hypocritical to not practice what I preach.

"I come into contact with food surplus and waste so often. I know there is a huge variety of surplus that you can get out there for a very low price.

“I decided to try reaching people through Instagram – effectively creating a food blog with a twist.

"I think the response has been pretty good – it’s not a particularly popular Instagram account but I’m surprised that a lot of people are interested in what’s behind it.

🌈 Rainbow veggie plate, coconut chicken curry soup, & pineapple 🌈 Can you believe most of the food was going to be thrown away? So glad to have save it through #dumpsterdiving 😊 The yellow sticker pineapples completes the #leftoverchallenge meal at 1.12 quid ⭐

“I’m trying to attract people to look at this issue in a less gloomy way, not like: ‘This food is being destroyed guys, we’re all going to die!’”

She hopes that it’ll encourage people to make changes, however small.

“For me, it’s a sustainable way of living because I work in this sphere, but I know for a lot of people that it is not. I want to show people that there are very simple things you can do, such as buying yellow labels and planning your meals in advance.

Because part of her frugal living involves rummaging in bins, Josephine has faced criticism from people who argue that it’s unethical to do so as she's effectively taking food from people in need despite being perfectly able to afford her own groceries.

“First of all, I agree with them. When I do my food waste collection, most of the food goes to people in need.

"For example, when I do the bin rummaging, I always select the people in need to get it first and I get one portion. So much is wasted that there’s enough for everyone.”

So she effectively isn't taking any food from anyone, because so much food is being wasted.

“I think that food poverty and food waste are separate problems," she adds.

"I feel like those are problems that deserve attention on their own.

She acknowledges that there are people on the edge of poverty who also need help.

“It’s that marginal space that a lot of people ignore. They say: ‘We’ll have set up a charity for poor people and have really cool food for people with a lot of money’, but what about the middle?”

“A lot of people who use food sharing app Olio are on the verge of food poverty but aren’t eligible for benefits even though they’re not earning a lot.

“Olio is a dignified way for people to get food on a difficult week or day. Many people who use it will be marginal and probably won’t qualify to go to the food bank to get food but are still in a tough place.”

Bringing about change on all levels

The food waste campaigner says we need to focus on the food system; the way food that is being used, distributed and recycled – and it can start with us.

“Solving an environmental issue can’t just be done with people screaming. Policy changes when there’s public pressure and that pressure comes from awareness, so I’m trying to raise that awareness.

“I used to work on the Sainsbury’s Waste Less Save More campaign and they were telling us that food waste wasn’t on the radar until a couple of years ago.

“They do a survey every year to see what consumers are concerned about and food waste has become the second priority. It’s why there are suddenly so many food waste initiatives from supermarkets.”

Change should come from how supermarkets operate too.

“They need to be transparent with the amount of food they’re actually wasting.

"That means all the way up the supply chain – how much they’re wasting in shops, on farms.

"When they lock away their trash it’s just putting the question on hold. Nobody can do anything to combat food waste because there’s no data coming out and they can’t work on empty promises.

She notes the issues around status.

“A lot the problem with bulk markets in the UK is that they try to make it hipster, but it actually inhibits people from having a zero waste or a less wasteful lifestyle because that barrier’s there.”

“Frozen options are a good solution to food waste. There’s a lot of stigma around frozen food because people think it’s bad quality, but the nutrient content is often higher.”

🐙🐟🐊 Seafood medley pasta for #leftoverchallenge 🐙🐟🐊 The seafood was bought on a yellow sticker haul for 2.49 back in the end of October and frozen immediately ❄️ Freezing is one of simplest ways to make your food go longer and prevent food waste ⛄️Another good rule to go by is "first in, first out," which means to consume whatever goes into the fridge first 🍓🍆🌶 What are your fridge tips? 😉 海鮮意大利麵，感覺好 #豪華 🐙🐟🐊 #海鮮 是十月尾時的超市到期减價食品，買回來便速凍了❄️速凍真是個簡單的惜食方法，便利地保全食物的新鮮和 #營養 ⛄️另外一個防止食物 #浪費 的小 #貼士 是"First in, first out (先進去，先出來)"，就是先吃最早放進冰箱的食物⭐️你有没有甚麽 #惜食 的小 #技巧 呢？🤔⚡️

Then, of course, there’s the action from the Government itself.

“I would like to see the Government doing better with expiration labels because right now they’re murky and it misleads households into wasting more food than they need to.

“Our politicians should take a leaf from the French Government where supermarkets can’t throw away any food and it needs to be donated to a charity or to people in need.

"There should also be better policies on cosmetic standards so that no food is needlessly wasted or that food which doesn’t meet the ‘beauty standard’ will be diverted to people in need.

“There are lots of things. That’s the problem with campaigning – you never stop!”

Life before the project compared to now

Josephine is saving a fair chunk of money through the Free Tasting Project, but she’s generally frugal anyway.

In fact, the day she came to loveMO

NEY’s office, she’d just moved into her latest guardianship property, which she’ll be in for the next year.

She prefers to spend her money on travel.

How to pay less rent as a property guardian

“I’ve always been conscious because I don’t like spending a lot of money on food. I used to do meal plans and cook on Saturday and Sunday, going out maybe twice a week.

“If people want to eat out these days, I’d just say let’s do TooGoodToGo and come to my place to watch a movie.

"My friends think it’s a cool idea to use TooGoodToGo and Olio. I think that once you get on it you use it a lot, but you won’t know about it unless someone introduces you to it.”

How you can get involved

It’s dead easy to do your bit to help tackle food waste: it can be as simple as using an app.

“On Olio, things get posted in central London every 10 minutes and these are ingredients you can make meals out of.

“TooGoodToGo (pictured, right) gives you a good portion of food, which will last you two meals. That alone means you’re saving £2-£3 a day.

Using these apps, you can get surplus food very cheaply and very conveniently.”

Read more about TooGoodToGo in Christmas money challenge: can I make up the cost of a winter holiday with cashback, sales and apps?

Of course, if you live outside of a city, it may be harder to get hold of food. However, you can find food waste schemes and initiatives across the country.

“There are lots of things like The Real Junk Food Project and FoodCycle – they have hubs around the UK. They collect surplus and make it into hot meals.

“You don’t need to be a certain ‘type’ of person to use it. If you think the meal is worth £5, you can pay £5. If you’re in a bit of a crunch or you forgot your wallet you can choose not to pay.

"Gleaning Network works with farmers across the UK when they have surplus produce on their fields that are going to waste.

"You can go and volunteer and get five baskets of apples that are perfectly fine but might have fallen on the floor.

“Just talk to people. Talk to your local farmers and butchers.

"You’ll be surprised at how easy it is to get in contact with someone who has a surplus.

“If you’re an early bird (say 5am) you can go to your local wholesale market and ask the storekeeper.

"They might give you the surplus. There's a lot of turnover and they need to pay money to get rid of it.”

Or if you want to go gung-ho, you can give your time to helping fight food waste, and you can save a few bob doing it.

“Volunteering is really flexible – for example, I volunteer for Olio one day every week and that takes two hours and you get 10% of all the food you collected.

"I come out with about 10 sandwiches every time! Every bit of food they give you is a good couple of portions so you’re saving a fair amount.

“You don’t need to do it full-time, you can just do parts of it. You’ll still be saving money and waste.”

Are you resolving to waste less food this year? Let us know in the comments below.