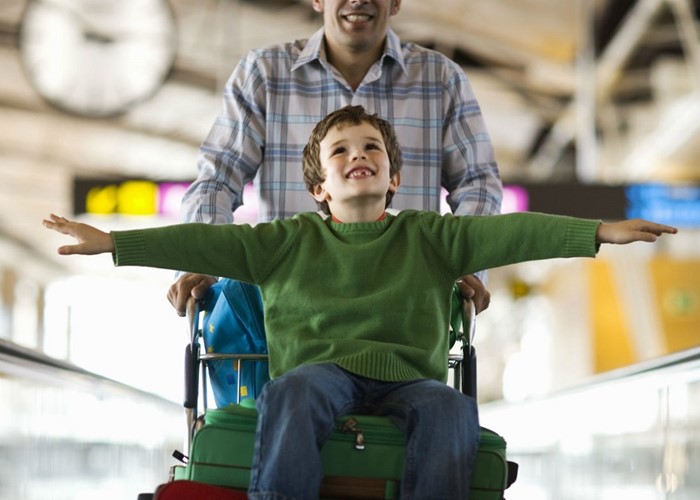 Here are our top tips for slashing the cost of your next flight, including how to get rewards, discounts and even free flights.

Flight comparison websites such as KAYAK, Skyscanner, Cheapflights, momondo, Fly.com and Google Flights may help to cut the cost of your next holiday.

Most of these sites have features that let you do so much more than simply look at prices for a particular route and day.

Most sites will let you look at the cheapest prices over entire months, alternative airports you can use, and highlight destinations and prices on a map to help you easily compare prices.

Particularly within Europe, flying to a less well-known airport can lead to considerable savings, although you should consider airport transfer costs.

Also, don't forget to check the airlines' own websites. You could find a cheaper price and even perks, such as a free stay at a hotel during a stopover.

It is also usually cheaper to amend or cancel flights booked directly with an airline.

If you go to a foreign airline's website and change your location to that country, you may be able to find cheap domestic fares (EgyptAir is one example), or domestic fare packages.

If you do opt for this method, bear in mind that you'll be paying in a foreign currency, which could incur extra charges from your card provider.

Look out for age-related discounts for kids and under-30s with STA Travel, although frustratingly there's no mandatory discount for children.

If an airfare appears unusually cheap, you should ask the following questions:

When is the flight? An overnight flight, also known as a ‘red-eye’ flight, could save you a night in a hotel and potentially a day in leave, providing you can sleep on a plane. The flights themselves are also often cheaper.

Where are they flying to? There are an increasing number of budget airports that can be miles out from the city centre, with transfer costs that are higher than the plane ticket itself. The same question should be asked of where in the UK the flight departs.

Are hold luggage and meals included? Don't assume that legacy airlines such as British Airways always include these perks, as the cheapest fares often don't. Budget airlines are notorious for their stringent luggage rules, so you have to do some research to get the best deal.

Ryanair, for example, charges up to £35 for checked baggage (20kg) for a one-way flight, if booked in advance. In some cases, their ‘Plus’ fare can cost less than this and includes baggage and a reserved seat.

Is there a stopover? Flights with stopovers can save you money but take a big chunk out of your holiday time. Also, the more stopovers you have, the more likely it is that your luggage could go missing.

Booking as a group can get you a great discount but, in some cases, can lead to you paying more when it comes to flights.

Airlines have a set number of seats available at different price brackets.

Once these seats have been sold, you’ll be paying the next higher price, which is when you’d see alerts such as ‘one seat remaining at this price!’.

If you decide to book as a group of four, for example, you won’t get the one cheaper seat and then three from the more expensive bracket, but rather all four seats at the higher price.

We looked at some flights with British Airways and Ryanair to see if booking separately would make a difference.

We chose a flight from London to Berlin with British Airways, which advertised ‘five left at £101’.

But booking all six tickets together came to £834, making it £139 per person, as we were automatically given six from the more expensive price bracket.

Even if you factor in paying extra to select your seats, which can cost between £7 and £50 in Economy with British Airways, you’ll still save money by buying separately.

For Ryanair, we looked at return flights for four from London to Rome and were told there was ‘one seat remaining’ at the price of £76.98.

By booking that one seat separately, and then the other three together, the four tickets came to £349.92. When we looked at buying four tickets in one go, the total was £363.92.

Flight comparison site KAYAK refused to comment on whether or not booking separately made flights cheaper for customers but did highlight some of the possible problems of not buying flights together.

“There can be a number of risks when booking flights separately. For example, the flight may sell out before the whole group has booked all of their flights, or travellers may not be able to sit together,” says Sophie Gough, senior director at KAYAK Europe.

It is possible to work around these potential problems by booking early and reserving seats. If you are willing to take the above risks, there are definitely savings to be made.

Get an airline credit card

A big perk of using a credit card is that they can pay cashback and give you air miles or other rewards.

While the rates might not seem that great, when these cards are used for expensive airfares, your cashback can really add up.

With the British Airways American Express card (representative APR 22.9%) you can get one Avios point for ‘virtually every £1 spent’.

The fee-free card offers 5,000 bonus Avios points when you spend £1,000 within your first three months of having the card. That would leave you with 6,000 Avios points in total – enough for a one-way European flight.

The British Airways American Express Premium Plus Card (representative APR 76%) has a higher bonus of 25,000 Avios points when you spend £3,000 spent in the first three months, but also a steep fee of £195 per year.

If Virgin Atlantic is more likely to fly to your dream holiday destination, the Virgin Atlantic Reward Credit Card (representative APR 22.9%) gives you 5,000 Flying Club miles for your first card purchase – as long as it is made in the first three months of having the card.

You would also get a premium or companion ticket if you spend £20,000 in a year.

It has the same rewards conditions as the more basic Virgin Atlantic card, but you'll get a free premium or companion ticket after spending £10,000 in a year and it comes with an annual fee of £160.

If you want to earn points that can be used on multiple airlines, the American Express Preferred Rewards Gold Credit Card (representative APR 57.6%) is a possible option.

The £140 annual fee is waived for the first year and you'll get 10,000 bonus Membership Rewards points if you spend £3,000 in the first three months, which is enough to cover a return flight from London to over 50 destinations.

There is also a fee-free version of this card: the American Express Rewards Credit Card (representative APR 22.9%), with 5,000 bonus points on offer although you have to spend £2,000 in the first three months of card membership.

Make sure you'll spend enough on the card to qualify for the bonus – as we've found, this can be difficult.

As well as welcome offers and bonuses, airmiles or points gained through spending can be used to pay for future flights.

You don't need to spend your air miles on flights alone: we've put together a guide on ways you can make the most of them.

The second reason to book with a credit card is that you have a much better chance of getting your money back should the airline go out of business.

Thanks to Section 75 of the Consumer Credit Act, you're automatically protected if there is a problem with any purchases made on a credit card that are over £100 but under £30,000.

To ensure you get the best protection, it's also worth booking directly with the airline instead of third-party sites, even though it may not always be the cheapest option.

With all credit cards, it's vital you pay off your balance in full, or the interest could wipe out any savings you make.

You can compare cashback and rewards credit cards here

Both British Airways' Executive Club scheme and Virgin Atlantic's Flying Club are free to join, and you can find out more about the perks on offer here.

It's important that you only sign up to a frequent flyer scheme that suits your needs.

You can usually begin to get free (taxes-only) flights once you've earned a few thousand points with British Airways, or slightly more with Virgin, as its flights are generally longer.

There are good benefits to be earned through both flight clubs and you've got nothing to lose by signing up, but it is quite difficult to earn enough points by only flying short haul.

It's also worth noting that airlines often restrict the number of seats available to those using frequent flyer points, so you'll need to book early to reap the rewards.

Volunteer to be bumped

If you're fairly flexible with your travel times and dates, you can volunteer to be bumped from your flight.

Check the seating plan on the flight in advance as it could be a good indicator of whether it'll be overbooked. In fact, some flights might already be overbooked before you get there.

After you arrive at the airport, get to the gate early and let the flight crew know that you're willing to be bumped if there aren't enough seats for everyone.

They won't know if the flight is overbooked until boarding, so be patient. You're also more likely to get bumped off if you only have hand luggage, so that’s worth keeping in mind.

While you're waiting, listen out for announcements asking for volunteers who are happy to give up their seats.

Compensation varies if you volunteer to be bumped, but you'll often get flight vouchers worth more than the price you paid or other rewards such as upgrades and cash, as well as a seat on a later flight.

You're also entitled to a refund if you no longer wish to fly at all.

For travel inspiration and destination guides, take a look at our sister site loveEXPLORING