Almost six in 10 loveMONEY readers say their finances have actually improved under lockdown.

When asked how you’d been affected, a remarkable 23% said you were significantly better off, while the biggest amount, 36%, said things had improved slightly.

That means a total of 59% have seen an improvement of some kind since March – as you can see in the screenshot of the poll below, which captured results as of the morning of 05 June.

At the other end of the scale, 13%, more than one in eight, reported that your finances had been hammered since the lockdown came into effect, while a similar percentage (14%) said you were slightly worse off.

If you are struggling financially, do have a look at our guides to getting free debt advice and tips for clearing debt once normality returns.

You could also take a look at the detailed information available from charity StepChange on debt and the Coronavirus.

Finally, 14% of respondents said your bank balance looked largely the same at the end of each month.

The poll had received just under 500 votes at the time of publishing this article (remember you can go back to the original article and add your vote if you wish to see the latest results). 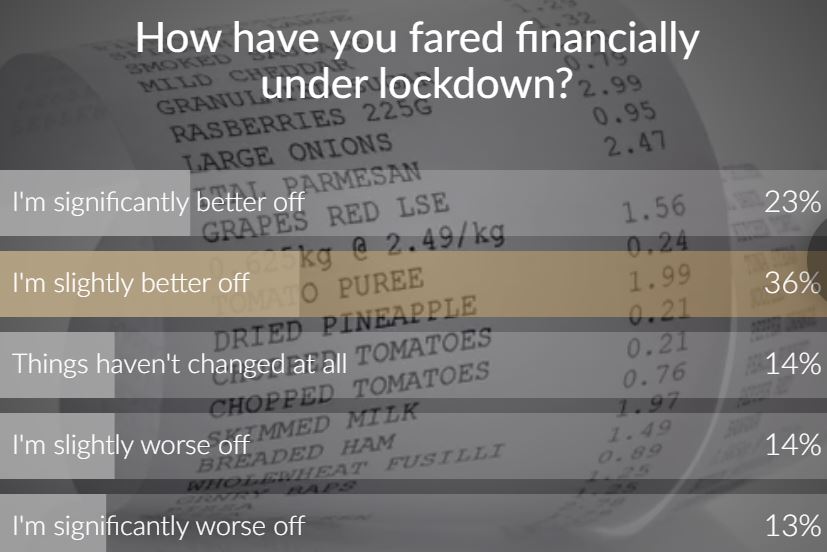 It might seem surprising that anyone, let alone the majority of respondents, could be better off.

After all, the economy has plummeted, some companies have closed for good, others have slashed vast swathes of their workforce, while millions are losing at least 20% of their income through being furloughed.

And as reader @patricoz pointed out in the comments section, those reliant on dividend income have had a brutal couple of months.

“[My] portfolio [is] down considerably but long term will rise again, but dividends suspended: money that will never be recovered.”

However, there are various other factors at play, especially when it comes to personal spending.

For one, the fact that no one was allowed out for anything not deemed vital meant spending on going out obviously plummeted.

Another factor is that millions of workers were able to work from home, saving up to hundreds a month on commuting costs.

You might also have a fixed income that is completely unaffected by the chaos, for example if you have a final salary pension.

So, there are many reasons why finances might look slightly better, or at least no worse.

Opinion: let’s not lose sight of the few money positives to come from Coronavirus

Nothing conclusive in our poll

It’s important, if obvious, to stress this is just a snapshot of some loveMONEY readers’ experiences and should in no way be seen as a reflection of the wider population.

Given the millions of people forced to take repayment holidays, being furloughed or losing their jobs completely, it seems highly unlikely the figures above would be reflected in a poll of the entire UK.

Nonetheless, it does provide an insight into the loveMONEY community and a reminder that it has by no means been financial doom and gloom for everyone (let’s just put the Government’s booming debt problem to one side for the moment).

As a final point, and something we stressed in the original article, the devastating loss of life and tragedy seen across the nation is absolutely the most important aspect of this pandemic, but as a personal finance website we thought we’d also take a look at the financial impact.