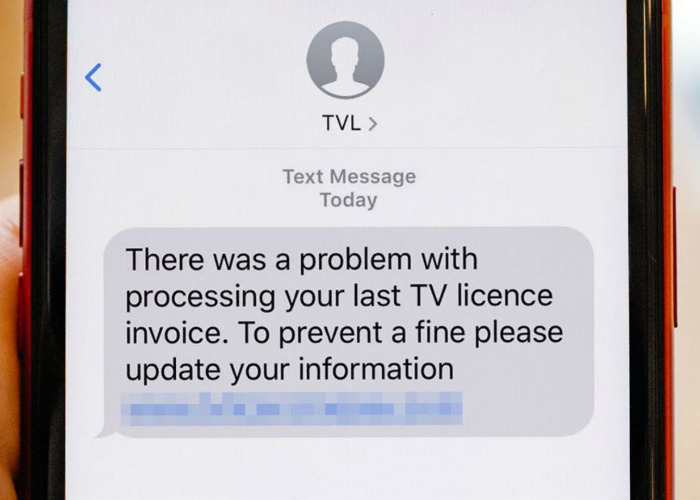 Scam emails and texts from 'TV Licensing' flagging up a supposed problem with your payment method are doing the rounds. Here's how to tell they're fake.

A TV Licensing scam is appearing in emails and texts claiming there has been a problem with your payment method.

Whilst previous TV Licensing scams have promised refunds, the latest scam claims "your Direct Debit has been cancelled" and asks you to "set up a new payment".

There are a number of variations of the scam: some claim your billing information is ‘out of date’, that something has 'gone wrong' with your direct debit, or that there's been a ‘problem processing your last TV licence invoice’.

Some spell TV Licence as "TV License" in the introduction.

Often the emails or texts threaten you with a fine or to pass your details to a debt collection agency if you don’t update your details.

If you were to click the link (which you absolutely shouldn't) you're taken to a page that looks like the official TV Licensing website and asks victims to enter their personal details, bank details and debit/credit card numbers.

With free TV Licences scrapped for over 75s, it's likely we'll see even more of these scams being circulated as criminals look to target those who might be less tech-savvy.

Below is one example of a scam TV Licence email.

As mentioned earlier, conmen often put out several versions of the same email, so don’t expect every email to look exactly like this one, which was shared by Twitter user @RugbyCath.

Folks, please watch out for this email scam and keep an eye out for elderly relatives or any vulnerable people who may be taken in by it. I know several people who have received it and it's fairly realistic. RT pic.twitter.com/OIgPv3GmFB

The fake mail comes with the official TV Licensing logo and contains a few grammatical errors.

It begins by stating: "We're sorry to let you know that the TV License could not be automatically renewed.

"Something's gone wrong with your payments."

It then includes a number of prompts to visit the fake TV Licence page.

The text version of the scam can seem even more convincing – as it’s shorter, the scammers have less chance of making obvious mistakes.

The text even appears to come from ‘TVL’:

⚠️ Alert: We are now seeing scam @tvlicensing text messages on top of the thousands of fake emails that have been reported to us!

✅ TV Licensing will only send you text messages if you have signed up for them! https://t.co/DeZdFhDa4Q pic.twitter.com/41GqDDd65K

What does a genuine TV Licensing email or text look like?

TV Licensing is aware of the scam and has put out some information on how to spot fake emails and fake texts.

With emails, click on the sender name (i.e. TV Licensing Customer Service) to see what the actual email address is. It should come from donotreply@tvlicensing.co.uk or no-reply@tvlreminders.co.uk.

Don't ever click on any links contained within a suspicious email or trust any of the contact details.

You should only receive a text if you’ve signed up to TV Licensing’s text reminder service. It’s easy for fraudsters to fake text names so you should treat all texts with suspicion.

Genuine emails and texts should never ask you to share information or set up a payment plan. If in doubt, contacting TV licensing directly through their website.

If you have been sent any emails or texts and entered your details, contact your bank immediately and report the fraud to the Action Fraud Helpline.