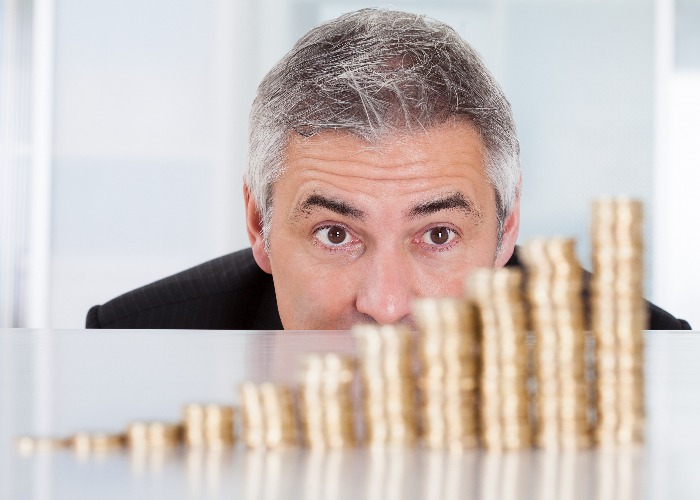 It may be a decade since we saw a base rate rise, but in many ways savers are in a stronger position today.

Last week marked the 10th anniversary of the last time the Bank of England announced an increase in the Base Rate.

In those heady days in July 2007, the Bank’s Monetary Policy Committee increased rates to 5.75% – a figure that seems eye-poppingly high in the current climate – just as it was becoming clear that the global economy was in a spot of bother.

There is no doubt that since then, things have been tougher for savers.

Base rate has fallen, and then languished, at record lows, making it tougher for those putting some cash aside each month to actually get a decent return, particularly when you take inflation into account.

But when you account for inflation, the real value of that money would be just £878.

Beating inflation is really the name of the game when it comes to saving.

As the example from Hargreaves Lansdown shows, you can end up with a higher savings balance but actually lose money in real terms if you fail to do so.

And with inflation rising in recent months, that’s not been so easy to do.

Last month the Office for National Statistics reported that inflation had hit a four-year high at 2.9%, driven by the increasing cost of package holidays, imported computer games, food and clothing.

As a result, financial information site Moneyfacts reported that not a single standard savings account could beat inflation.

However, it’s worth noting the Bank of England’s forecasts for inflation.

With the rates on offer from savings deals improving – the number of interest rate increases on savings accounts outweighed cuts for the fifth month running according to Moneyfacts – then it’s perhaps fair to suggest the current situation where inflation is untouchable is more of a temporary blip than the new norm.

It’s also important to remember that there are many, many ways in which the position of savers today is far better than it was back in 2007.

Not convinced? Ditch savings and look at your long-term investment options (capital at risk).

The evolution of peer-to-peer

Back in 2007, peer-to-peer as a concept was very much in its infancy, with Zopa really the only firm offering savers the chance to get a better return on their money by lending directly to other people.

It’s a vastly different situation today, with a host of firms active in this space, allowing you to lend your money to both individuals and businesses and get a cracking rate of interest in return.

What’s more, the peer-to-peer space has grown up significantly in that time. We have an active trade body, the Peer-to-Peer Finance Association, which ensures that firms conduct themselves properly.

There has also been a growing emphasis on security, with lots of peer-to-peer lenders now establishing some form of safety net which will step in and protect your money should a borrower fall into difficulties.

The predicted rates of interest easily beat inflation – Zopa’s Plus account pays a rate of 6.1% for example.

That the market is sufficiently well developed that it now has its own ISA is a terrific sign for savers of all shapes and sizes.

Speaking of ISAs, the tax-free savings accounts have been through some significant changes of their own over the last decade, all to the benefit of savers.

For example, today you can save vastly more in one of these tax-free savings accounts than was the case ten years ago.

Indeed, there are now a host of other ISAs worth a look besides the traditional ones, including the Innovative Finance ISA (in which you can hold certain peer-to-peer investments), the Help to Buy ISA (which offers a Government bonus on your savings in order to help you build a deposit) and the Lifetime ISA (which offers a Government bonus if you use the money towards a deposit or to supplement your pension saving).

Even if you don’t stick your cash in an ISA, the Personal Savings Allowance means that the vast majority of us won’t pay any tax on the interest we earn from our savings pot.

Since April 2016 we all enjoy a £1,000 personal savings allowance; we can earn that much in interest from our savings before having to hand any over to the taxman, a move that means an incredible 95% of savers don’t pay tax on their savings.

Take a look at the savings best buy tables. Chances are the names at the top won’t be the most familiar; challenger banks like RCI, Atom Bank, Al Rayan and Masthaven have all grabbed the attention with interest rates far more impressive than those than you can expect from high street banks.

These challenger banks, often operating almost entirely online, are offering a new way of banking and saving, with better returns to boot.

Savers today have a far wider group of banks to choose from – and with more robust protection in place for savers’ money – than has been the case in recent years.

Even current accounts are a savings alternative!

For those with small amounts of savings, a current account may actually serve as a useful alternative to a dedicated savings account.

What do you think? Is John right that the savings environment isn't that bad all things considered? Share your thoughts in the comments section below. As always please keep it clean! We're here to debate issues, not hurl insults.