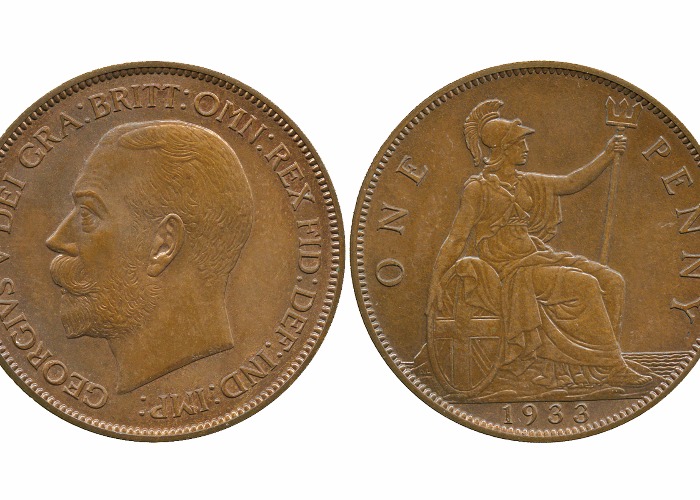 The rarer the better - it’s no wonder this bronze beauty sold for the same price as a Lotus Evora 400.

An extremely rare penny has sold for a world record-breaking £72,000 at London auction house Baldwin’s.

The coin, which is one of only four in existence, was presented as a prototype for the 1933 penny but never made it to production.

It's the first time one of these "Pattern" coins has been seen at auction; the other three are in private hands, and the newly-sold coin now belongs to a private collector as well.

How did the coin come about?

At the Royal Mint meeting of the ‘Standing Committee on Coins Medals and Decorations’ in 1931, the agenda had George V at the centre as the Committee decided to redesign the penny with his likeness as the key development.

French sculptor and medallist André-Marie Lavrillier was commissioned to create the new bronze penny to remove ghosting from bronze coinage once and for all.

In 1932, the Royal Mint had an excess of pennies, so no more currency versions were needed the following year.

In fact, only seven pennies with the 1933 date were minted for ceremonial and record purposes. The actual currency coins are thought to be worth twice as much as the Pattern versions.

Perhaps unsurprisingly, there was a lot of bidder interest in the special coin. Baldwin’s said it had requests from countries such as Australia, United States and New Zealand, with potential bidders flying in from all over the world to view the auction live.

Richard West at Baldwin's described the sale as "one of the most successful that we have conducted in our 140 history".

The initial estimate for the coin was between £35,000 and £45,000, according to West. And while the eventual £72,000 price tag is eye-catching, that record could be smashed if one of the actual currency version were to become available. "The currency version has not been sold at auction for over 25 years, so how much it would go for is a bit of a guess," West said.

"That being said, given its rarity and general popularity, then we would probably be looking at over double the price realised for the Pattern version."

The world's top 30 most prestigious universities

Companies paying the highest salaries in the UK

The world's biggest payouts on the longest sports bets