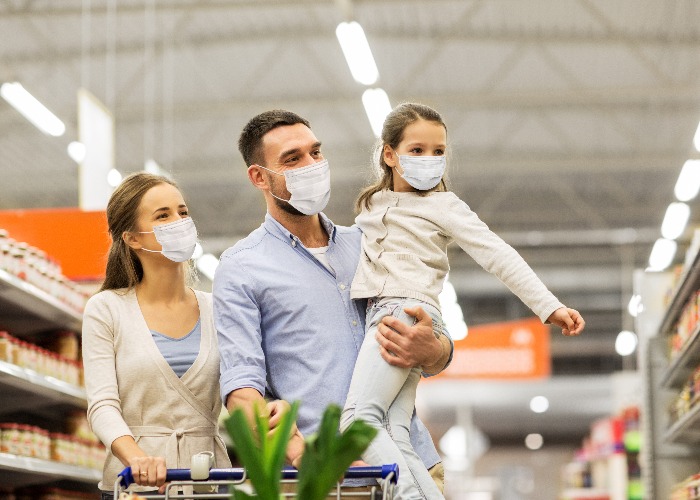 Food prices have just started falling for the first time since 2017, but already analysts are warning that certain rising costs may have to be passed on to shoppers.

The supermarket shop is one of the biggest expenses most of us have to cover every month.

After all, you can’t really get around the need for food in the way that you might cut out less vital spending from your regular outgoings.

Thankfully, new data has suggested that our trips to the supermarket aisles are getting a little cheaper too, though there are big question marks over how long that can continue for.

The British Retail Consortium and NielsenIQ track the prices we pay for a host of different items at the shops.

And when it comes to food, prices have dropped for the first time in years.

The report from the two organisations found that food prices dropped by 0.6% in April, compared to a rise of 0.3% in the month before.

Incredibly, this is the first time the firms have measured a drop in food prices since January 2017 ‒ more than four years ago.

Fresh food, in particular, got noticeably cheaper, with prices dropping by 1.5%, from a 0.8% drop in March, while the report found that ambient food inflation fell to 0.6% in the month ‒ the lowest rate measured since March 2018.

Getting more bread for your dough

This data is supported by the inflation figures from the Office for National Statistics (ONS), too.

In its latest breakdown of the consumer prices index, the ONS noted that one of the big downward pressures on the inflation rate was the price of food and non-alcoholic drinks, which had dropped for five months in a row and was down 1.4% in the year to March.

The last time the food rate was lower according to the ONS was back in November 2016, with the biggest price falls seen on things like bread, cereals and confectionary.

Why prices are falling

There are a few different factors playing into the food price fall.

The BRC pointed out that supermarkets were running far fewer price promotions a year ago, as they attempted to put people off stockpiling as the first lockdown kicked into gear.

But there’s also competition. There’s no denying that the food market is far more competitive today than it was just a few years ago, as the deep discounters of Aldi and Lidl have built up a bigger following.

The large supermarkets have seen their market share eroded away, as shoppers have recognised that they can pay substantially less for their food, without having to sacrifice the quality.

And those savings really are substantial.

The consumer champions at Which? recently released a breakdown of the average price you’d pay for a trolley of 45 items ‒ including the likes of Hovis bread, stock cubes, cucumber and tomatoes ‒ at the main eight names across 2020.

It won’t surprise you to hear that Lidl and Aldi were the cheapest, charging £42.67 and £43.01 respectively.

What may be surprising is just how much cheaper that is than their rivals ‒ more than £10 less than the likes of Tesco and Sainsbury’s, and an incredible £26 less than Waitrose. Over a year, those savings add up to some serious cash.

It’s because of this increased competition that we’ve seen those big-name supermarkets adapt how they work to try to rival the deep discounters.

With Asda, it’s been the promise of stripping back their product ranges so that they can charge less, while Tesco and Sainsbury’s have each launched price match schemes with Aldi.

What happens next to food prices?

The big question then is whether we can expect to see food prices continue to fall.

Helen Dickinson, chief executive of the BRC, warned that retailers face some serious price challenges in the coming months, from the additional red-tape that results from Brexit to rising shipping costs and increasing food and oil prices.

And as a result, she argues that these stores will have no option but to pass on at least some of these costs to us, the normal shoppers.

Only time will tell if that actually happens, particularly when supermarkets will be only too aware that an awful lot of shoppers are having to make do with smaller budgets given the ongoing job turbulence.

But it’s an important reminder for all of us of the need to keep an eye on how the price we pay at the till can change, and be open to the idea of switching supermarkets in the hunt for better value for money.

And of course, keep an eye on our weekly roundup of the best supermarket deals and discounts.