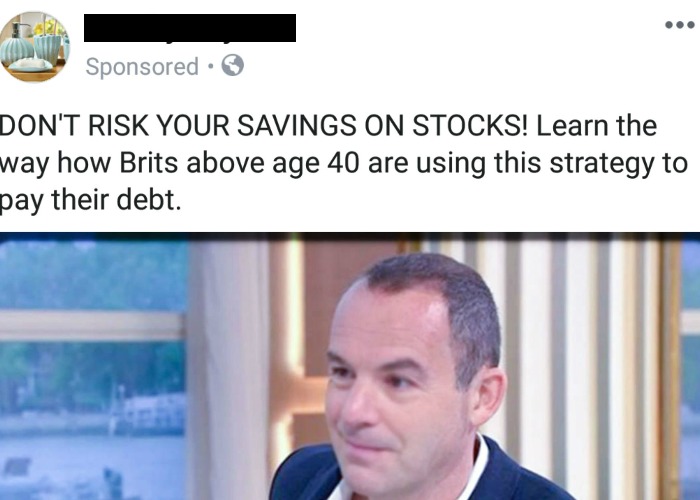 We’ve uncovered cases of complaints about Facebook scam adverts being ignored or rejected by the company.

Facebook has vowed to take a tougher line on scam adverts and donate £3 million to scam prevention measures, in return for MoneySavingExpert founder Martin Lewis dropping his lawsuit against the social media giant.

Lewis, whose face has been used without his permission to advertise risky and often entirely fraudulent financial services, had been frustrated by Facebook’s unwillingness to remove scam adverts. He commented:

“My aim was to stop the hideous number of scam adverts that have been going on in the UK, that have really hurt people.”

“Google and the rest of you - online advertising has to take responsibility. Real people are seeing their life savings taken away.”

Lewis estimated that thousands of people had lost money as a result of the scams and noted that scams featuring him are still appearing.

Unfortunately, loveMONEY’s own investigation over the last month casts doubt on Facebook’s ability to respond to complaints about scams.

Top online pop-up advert scams and how to avoid them

At the core of Facebook’s fight against scams will be the introduction, in May, of a ‘button’ where you can report suspicious ads. It’s only being introduced in the UK.

A “dedicated internal operations team” will then investigate reports and take action against Facebook’s advertising policies.

However, Facebook already has a ‘Report Ad’ button and, they told loveMONEY, a 'Community Operations team' in place to respond to those reports, numbering 30,000 people and operating 24/7.

All this was in place before Lewis launched his lawsuit – so what went wrong?

As loveMONEY found, simply reporting a scam isn’t necessarily enough for it to be taken down – and is unlikely to deter criminals.

We reported three clearly fraudulent adverts, all from the past month, two of them featuring Lewis himself, to no avail: Facebook ignored, was unable to accept or simply rejected the complaints we made.

We asked Facebook to explain how they dealt with our complaints. They responded that “the ads were incorrectly approved but were removed from Facebook very soon after for violating our policies.”

Facebook wants to make it easier for people to complain about scams – but what’s the point if the complaint is ignored?

How do online adverts know what I like? And what can I do about it?

What is a scam advert?

Just because an advert is on social media, UK advertising rules still apply.

Furthermore, the Advertising Standards Agency told us they “expect social media platforms hosting UK ads to work with us in having problem content removed.”

Facebook’s advertising policies are similarly unequivocal. They prohibit “misleading or false content” as well as “get-rich-quick schemes” and “financial products and services that are frequently associated with misleading or deceptive promotional practices”.

Payday loans are banned, whilst firms advertising cryptocurrency must get Facebook’s express permission.

So, an advert featuring Martin Lewis – who has stated “any advert with me in is a lie; it’s a scam” – appearing to endorse “the way how Brits above 40 are using this strategy to pay off their debt” wouldn’t be permitted, would it? (click on the picture to expand)

Incredibly, Facebook rejected our complaint, which we made on Monday this week, stating that the advert “does not go against our ad policies” (click on the picture to expand).

We reported another advert earlier. This was fake on two counts – no only did it feature Lewis, it also included a fake 'Daily Mirror' news page about his 'success' in Bitcoin trading (click on the picture to expand).

In the classic style of a scam, it featured a ticking clock at the bottom of the page imploring people to act fast or risk missing out on an opportunity.

Facebook acknowledged receipt of our report, but a week and a half on we haven’t received any reply about what they’ve done with it.

Finally, it’s all very well having a button to report a scam, but if that button doesn’t work then it’s not much use to anyone. That’s what happened when we tried to report this advert (click on the picture to expand):

As mentioned above, we contacted Facebook about these scams and how they weren't dealt with. They told us that the adverts were "incorrectly approved" but soon after removed - but it's not clear if that was a result of our original reporting of the ad, or us contacting their press team.

We will also continue reviewing and reporting fake adverts when Facebook introduces the new advert reporting button in May.

Is regulation keeping up?

There’s another way to deal with fake adverts – you can complain about them to them to the Advertising Standards Authority.

The ASA is the Government regulator and hence has the power to make advertisers remove adverts.

They told loveMONEY that this applies “whether a social media platform agrees with a consumer complaint or not, it is the ASA’s role to make judgments on whether ads stick to the rules”.

They also say that the ASA should be your first port of call if you spot a suspicious advert.

The ASA can even respond to fake adverts from companies based abroad, by working with that country’s advertising regulator.

That it all takes time, however.

For ‘informal investigations’ the turnaround time is 35 working days (seven weeks) from receipt of a complaint to a notification of a decision.

For more serious ‘formal complaints’ the turnaround target is 60 working days (12 weeks) for cases involving harm and 115 (23 weeks) for all other cases.

So the scam would have been seen by many, many people before any action was taken. What's more, the ASA can’t actually help you get your money back.

The ASA has been open about its limitation: it’s Corporate Strategy 2019-2023 report noted that “some online-only advertisers don’t buy-in to the ASA system, which they see as part of the establishment they’re disrupting.”

Most relevantly to scam adverts, they warned that “we’re primarily able to deal with companies who want to play by the rules, and we need to deal differently with those who don’t, especially those we suspect of running fraudulent businesses.”

The biggest online scams and hacks of 2018

Clearly, Facebook and the ASA have some work to do to respond to fraudulent adverts, but at least they’re making progress.

The ASA says they’re proactively working with advertisers in social media in certain sectors to stop problem advertising from appearing in the first place.

Facebook also says they have systems to “remove more content more quickly, before anyone reports it – or sometimes, even before anyone sees it.”

Encouragingly, Facebook will donate £3 million to help Citizens Advice launch in May a ‘scam action project’. This will increase awareness of scams, but also provide one-to-one tailored support for victims.

This is particularly important given the police’s Action Fraud organisation resolves as little as four in 100 crimes reported to it, according to This is Money.

Lewis has also called on Google to clean up their adverts, given Google’s adverts also appear within many websites (including loveMONEY).

In the meantime, the following tips can help you stay clear of scams:

If you suspect an advert is a scam, or misleading

Have you spotted or been affected by a fraudulent or misleading Facebook advert? If so please tell us in the comments below.