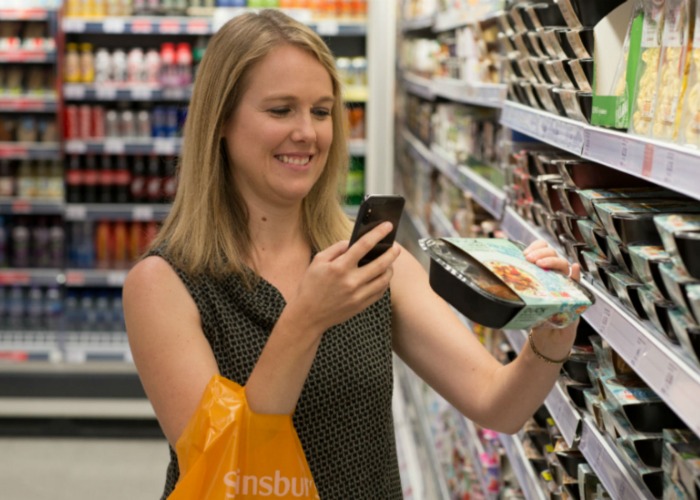 We visited Sainsbury’s Clapham North, where its SmartShop app is enabling customers to shop and pay entirely by mobile phone.

Getting stuck in a supermarket queue is one of the seemingly unavoidable irritations of modern life.

While the internet has revolutionised almost everything else, there’s not much that can help you if you’re stuck behind a lady buying top-shelf cigarettes or a man with 20 separate loose vegetables - until now that is.

Sainsbury’s is not the first store to offer till-free shopping in the world: Amazon opened a physical store in Seattle back in January where you’re simply billed when you leave.

It’s a long way from Seattle to Clapham North, but that's where Sainsbury’s has chosen to allow customers to buy groceries without going to a till at all.

loveMONEY visited the store to experience till-free shopping for ourselves.

How does till-free shopping work?

Unlike Amazon, which uses an extensive system of cameras and weighing scales on shelves to track customers, Sainsbury’s approach is fairly simple.

It uses the supermarket’s SmartShop app, which scans item barcodes using your phone’s camera, and puts together a shopping list as you shop. It’s linked to Apple Pay or Google Pay, which charges your debit and credit card, and your Nectar card.

Read more about how to boost your nectar points here.

The app is already available: Sainsbury’s claim over 3,000 new customers sign up every week and it works in 68 stores.

Usually, however, you’d have to use the app in conjunction with a till. At Clapham North, you scan the barcodes and a QR code, before walking straight out of the store.

Although slightly nicer than your average Sainsbury’s Local, the Clapham North store is not particularly futuristic.

And – spoiler alert – there are still tills for customers who don’t use the app.

On entry, a banner announces the SmartShop trial and an assistant was on hand to help out and explain the app. It already seemed to be catching on; “it’s really fun” commented a grinning lady passing by.

Setting up the app is relatively simple – I was able to do it whilst standing in one of the aisles – but you will need your credit card to hand to set up Apple or Google Pay.

I then approached my first target: a bottle of orange juice. I aimed my phone at the label on the shelf – rather than the bottle itself – and the app quickly recognised it.

I then moved onto the sweets aisle, hoping to grab a Bounty (no judgement please!). Unfortunately, the app couldn’t seem to recognise the barcode, despite several attempts.

Disappointed but probably healthier, I approached the check out area. The way you check out is to scan a QR code which is displayed on the shop window. It’s not that easy to spot and could easily be mistaken for an advert.

Once you’ve scanned it you use your fingerprint to authorise the payment and you are, in the app’s words ‘free to leave’.

Having never been a teenage shoplifter, leaving a supermarket with my bottle of orange juice, and without handing over any money, felt both thrilling and deeply uncomfortable.

Sainsbury’s told the BBC that the “level of discomfort dissipates” and that there are cameras and security guards to stop people putting things in their bags without scanning them.

The Clapham North store is only a trial and it’s difficult to imagine that the scheme can be rolled out at much larger supermarkets with more opportunities for thieves.

Plus, there are still teething problems to fix, with customers who lose mobile reception in stores having problems, and a continued question over items charged by weight, like potatoes, as well as age-controlled products.

As a shopping experience though, I found the app really easy to use.

You spend marginally longer picking items from shelves – as you need to scan the barcode – but you easily make up for that by avoiding queues at the till, self-service machine breakdowns and the inevitable ‘do you have a Nectar card?’

If Sainsbury’s can make till-free shopping work, and if we as customers can be trusted, this could be a huge step for mankind and the British supermarket shopper.

If you want to reduce your weekly grocery shop bill take a look at this week's top supermarket deals and offers.