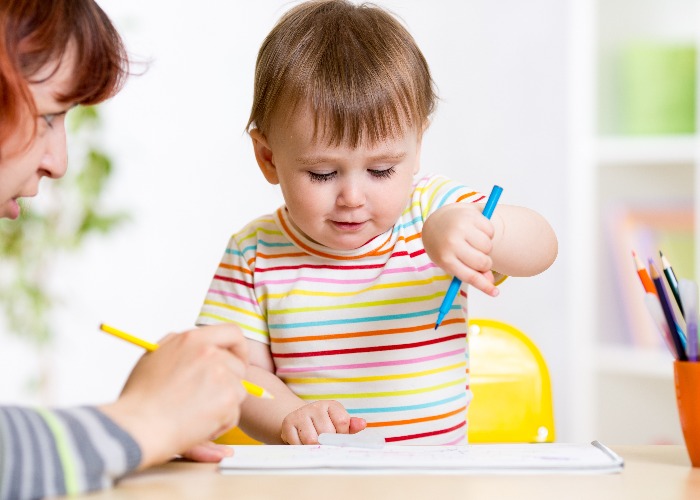 If we’re paying so much for childcare why aren’t the professionals involved paid more? Felicity Hannah investigates.

In fact, an international study carried out by the Organisation for Economic Co-operation and Development found that we pay more for childcare in th UK than any other country in the Western world.

The survey showed that a full-time nursery place for a child under two now costs an average of £222 a week and that working parents spend an average of £11,300 a year on childcare.

With three children under the age of six, including two in nursery, that’s something I know all too well.

Our monthly childcare bill rivals our mortgage for biggest household bill, even though I only work part time.

In fact, the cost of childcare was a major factor in my choosing to work part-time only.

Still, I thought, at least the nice nursery staff who take such good care of my boys must be earning a decent salary.

After all, staffing costs must be the main cost of running a nursery business.

But then I looked closer.

Make sure your family is protected: get a life insurance quote

Living wage… but not much more

A nursery worker earns an average wage of £6.97 an hour, according to the PayScale.com website.

They receive a median annual salary of £14,648 and, according to the site’s data, it does not change much with experience.

Those with more years under their belt earn just a small amount more than their brand-new colleagues.

I’ve seen first-hand how bright, professional and hardworking nursery staff are, so it surprised me to discover that there’s relatively little scope for increasing their income.

In fact, some nurseries have reported that they are losing staff or struggling to fill roles because of pay.

Purnima Tanuku, chief executive of the National Day Nurseries Association’s (NDNA’s), said: “We’re seeing situations in which lower-grade staff who picked childcare as their career of choice are leaving because they can earn more at employers like supermarkets that offer more family-friendly hours and less pressure.”

Nurseries had to increase pay last year, when the National Living Wage (NLW) came into force in April.

The development pushed nursery payrolls up 10% immediately and the (NDNA) estimates it will rise by 35% from 2020.

It says the Government does not fund them enough to pay such wages and keep childcare costs down.

Tanuku at NDNA added: “Nurseries want to reward their staff properly, but the combination of mandatory inflation-busting rises and chronically-inadequate funding is a real threat to the sustainability and quality of provision of private, voluntary and independent nurseries.

“Most nurseries will have to increase all staff wages to keep their pay differentials and incentives for qualified staff or risk losing practitioners.

“Nurseries [have expressed their concern] that the NLW could drive down quality with providers struggling to reward and retain well-qualified staff and forced to rely on unqualified younger staff.

“It all comes back to the inadequate funding that nurseries are currently paid for free childcare places – there needs to be a real step change in funding to allow for proper pay across the entire nursery workforce or risk childcare on the cheap.”

In for a pound

As parents, we should care about how much the staff looking after our kids are paid and not just because it’s the right thing.

A study carried out last year by the Family and Childcare Trust found a strong link between staff pay and quality in nurseries.

In fact, it discovered that paying an extra pound an hour could be the difference between a nursery achieving a ‘good’ grade and an ‘outstanding’ one.

The report showed that nurseries and pre-schools awarded ‘outstanding’ by Ofsted paid their staff an average hourly rate of £8.37, compared to £7.44 in nurseries that achieved a ‘good’ grade.

Those nurseries labelled as ‘requiring improvement’ or ‘inadequate’ paid an average of £6.92 an hour.

Julia Margo, chief executive at the Family and Childcare Trust, said: “It is no surprise that higher pay produces higher quality provision.

“We know that only good quality childcare makes a positive difference to the lives of disadvantaged children which is why we are calling on the Department for Education to address low pay in its forthcoming early years’ workforce strategy.

“Longer term, we want to see a fully graduate-led workforce with a minimum professional rate of pay, bringing early years professionals in line with their school colleagues.

“Without this, low pay will continue to discourage highly skilled people from joining the profession and will affect the quality of care received by our children.”

Neil Leitch, chief executive of the Pre-school Learning Alliance, added: “It is well-known that the early years sector is historically one of low pay.

“Many providers would love to be able to pay their staff a higher wage; however, a continued lack of adequate funding simply does not allow them to do so.

“As such, objective evidence that demonstrates a direct link between wages and Ofsted outcomes is clearly something that the Department of Education needs to take into consideration when developing future early years policy.

“As we have stated time and time again, quality costs. If the Government is serious about improving standards within settings - and ultimately achieving better outcomes for children — they need to invest what is needed to do so.”

It keeps coming back to state investment.

One problem that is highlighted over and over again is that the state subsidised childcare is causing nursery and pre-school settings problems.

Childcare is expensive in the UK because we do not make the same state investment in the sector that other European countries often do.

A nursery manager who asked to remain nameless told me that the costs of running a nursery are considerable, including staffing, admin, premises, extras such as food and nappies.

She said the state-funded hours actually make a loss for her nursery as the amount the Government pays does not cover the care and overheads provided.

The 15 ‘free’ hours made available for three-year-olds and above rises to 30 hours this September, but many nurseries say it’s a real struggle already.

Many report that the amount they receive for the subsidised hours is not sufficient to cover their costs, and industry groups have expressed real concerns that many will be unable to afford to provide the 30 funded hours later this year.

A report from the NDNA carried out last year showed that the majority of nurseries admitted being concerned about whether they could afford to extend the number of state-funded hours they offer, with the current 15 hours a week resulting in an average annual loss of £34,000 per nursery.

Make sure your family is protected: get a life insurance quote

More needs to be done

Currently, nurseries absorb that loss by charging more for children that spend more than 15 hours at the nursery, however, that’s unlikely to work out once there are 30 hours available as only a minority of children attend for more than that.

In December, the Department for Education attempted to address funding concerns by promising a minimum of £4 an hour for the funded places.

The new funding formula was welcomed by the industry but many still admit to concerns.

Leitch commented: “While increased funding is undoubtedly welcome, it is important not to confuse 'more money' with 'enough money'.

“For many providers, the difference between the cost of delivering 'free entitlement' places and the funding received from Government remains significant, and unless this gap is closed – as opposed to narrowed – the problems facing the sector will remain.”

What do you think? Should nursery staff be paid more and who should cover this cost – the state or the parents? Have your say using the comments below.

How to cut the cost of childcare