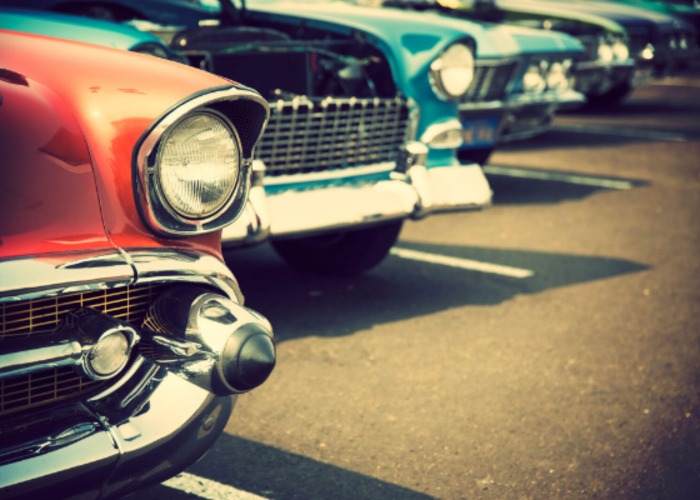 Want to invest in that slick Jaguar you've had your eye on? We find out whether or not investing in classic cars can get you worthwhile returns.

It’s easy to see why classic cars are in such high demand. At a time when the vehicles rolling off production lines look so similar, getting behind the wheel of something rare and beautiful is bound to be appealing.

Whether it’s a rare Jaguar E-Type from the 1960s or a more affordable Peugeot 205 GTi from the halcyon hot hatch days of 30 years ago, these machines can stir the emotions within any motoring enthusiast.

But can they actually make you money? It’s a question that divides the investment world.

Those in favour argue the value of rare automobiles will increase (and all returns are free of Capital Gains Tax); those against insist it’s difficult to generate a decent return.

How does investing in classic cars work?

The concept behind investing in this area is very straightforward. You buy a classic car, maintain it in good condition and keep until it hopefully rises in value – either due to increased demand for that make and model, or a fall in the number surviving.

The definition of what constitutes a classic is up for discussion. For some it will mean a beautiful 50-year-old Ferrari that they would tuck away in a garage, while for others it’s a Ford Capri to be used on a daily basis.

Unlike buying a unit trust, however, a classic car can’t be left alone. It will need to be stored and looked after properly in order to maintain its value. Such costs can be expensive and need to be factored into the decision making process.

A number of factors will dictate whether a car increases in value, according to Dietrich Hatlapa, founder of the Historic Automobile Group International, an independent research house specialising in rare cars.

“The main value drivers are rarity, desirability, and the popularity of cars with collectors,” he says. “The higher priced cars are generally rarer in terms of both numbers made and survivors.”

Other reasons to invest

There is also the possibility of tax planning benefits, according to Carol Cummins, a private client consultant at law firm Clarke Willmott, who points out that classic cars aren’t subject to Capital Gains Tax as they are classed as a wasting asset.

They can also reduce a person’s future Inheritance Tax bill. “If someone has a classic car worth, say, £80,000 in their garage then this will be added to their estate,” she says. “If the estate exceeds the IHT threshold then 40% tax will be due on the car.”

However, there is a way around this thanks to a useful planning tool - known as gift and leaseback - that enables them to place their beloved car outside of their estate for IHT purposes, yet still gives them the opportunity of driving it for pleasure.

“They can give the car away and if they survive for seven years then it will be off their balance sheet,” she explains. “They can enter into a leaseback arrangement whereby they pay for using it – including insurance and maintenance costs.”

Alongside tax – and the potential to make money - is the fun factor. For many enthusiasts, the opportunity to spend hours tinkering with their cars in the workshop and sourcing replacement parts from around the world is half the fun of ownership.

And those that take the plunge won’t be alone. Today there are literally thousands of clubs devoted to every conceivable make and model of classic car in every corner of the globe, as well as specialist sub-groups for racing.

So have people made money?

Well, the rollercoaster ride of the past quarter 25 years means that both sides can argue convincing cases. While the market has spent many years on its knees, it has also enjoyed boom periods that have handsomely rewarded investors.

Such movements are charted by HAGI’s Top 50 Index, which uses a variety of benchmarks to analyse the global market for rare collectors’ cars. It’s widely regarded as the most accurate measure of the sector.

The index, which is agreed by a committee that meets at least once a year, currently comprises 50 car models from 19 different marques. Inclusion depends on factors such as rarity and a minimum price of £100,000.

Unfortunately, growth in the classic car market has slowed significantly over the past year, according to HAGI’s Hatlapa, with the September figures showing the index is only up by a relatively modest 7.2 year-on-year.

“That’s a substantial change from the last few years where we’ve had double digit increases,” he says. “In 2013 the index was up more than 45% but there’s now more of an even match between supply and demand.”

The sharp increase in the number of motor auctions, classic car dealers and vehicles being restored means supply has caught up. This has particularly been the case for cars that were made in higher numbers, such as the Jaguar E-Type.

At the same time, however, classic cars that are in excellent condition continue to make good prices and that’s why the index continues to rise, albeit at a far more sedate pace than it was a few years ago.

“Top prices are still being paid for very good cars,” agrees Hatlapa. “We can’t say it’s better to have a Ferrari than a Porsche because the best models within each marque are commanding high prices.”

While no-one has a crystal ball in this area, Hatlapa insists most of the fundamentals haven’t really changed and classic car ownership is still very popular. It’s speculators in this area just to make a quick profit that are starting to look elsewhere.

“You can’t really talk about the bubble bursting, it’s just the boom that’s come to an end,” he says. “We think that’s a good thing as sanity is returning to a market that was a little bit overheated.”

What are the other risks to consider?

Although investing in these obscure assets may appear lucrative, it is important that investors fully understand the significant downside risks, warns Patrick Connolly, a certified financial planner with Chase de Vere.

“They don’t produce any earnings or income so price fluctuations are based solely on supply and demand,” he says. “This means there can be some big upward and downward price movements if there are changes in the economic environment.”

As well as the aforementioned costs involved in maintenance and insurance, Connolly points out these assets are also highly illiquid, which means owners may not be able to sell when they want - or at the desired price.

“Classic car investments are unregulated, which means that investors cannot fall back on the Financial Services Compensation Scheme (FSCS) or any other body if their investment goes wrong,” he adds.

Who should invest in classic cars?

This is why such investments should only be a relatively small part of a person’s overall portfolio, according to Gary Potter, co-head of multi-manager at F&C Investments, who insists it’s not for everyone.

“Buying such an asset is all just a punt on the valuation at that point in time,” he says. “It’s a question of what people will pay for certain assets but we’d never go near fine art or vintage cars as it’s not our area.”

What will be the classic cars of the future?

Motoring expert Giles Chapman, author of books such as ‘Cars we loved in the 1980s’, believes there is the potential to make money from classic cars - it’s just a case of choosing wisely and getting into the market before everyone else.

“At the moment I’m tipping the early Audi TT to everybody – either the coupe or the convertible,” he says. “It’s a car that’s at the bottom of the bell curve but is absolutely sure to be something that people want and think of as being very 90s.”

Of course, the key to making money with any investment is being ahead of the pack and that means looking at cars that are unloved or overlooked. Chapman suggests would-be investors look at what stopped being made a decade ago.

"Ten years after a car has gone out of production its value will be on the floor so you need to look back to around 2006 and pick up an iconic car of that time with low mileage, a decent interior and a full service history,” he explains.

Examples of cars to consider include an early Bentley Continental GT or one of the first second generation Mini Coopers. The key is choosing a car that captured the attention at the time and will evoke memories in the years to come.

“We’re so familiar with them now because they’re everywhere and part of the furniture but suddenly that won’t be the case,” adds Chapman. “Another vehicle that has made an impact and may be one for the future is the Range Rover Evoque.”

He also points out that people with the available cash to buy a classic car are likely to be between 35 and 50-years-old, well established in their careers, settled at home and with a growing family.

As they will generally have a love for cars that were around when they were young it means those currently in this age group are likely to be more enthusiastic about vehicles produced back in the 1960s and 1970s.

“They will have both the nostalgia and the cash to buy these cars,” he adds. “They might include Saab 99 Turbos, Triumph Dolomite Sprints or the BMW 2002 - anything that was around when they were growing up for which they feel passion.”

Don't forget the car insurance! Compare a range of free, no obligation quotes with loveMONEY today

Insurance con that costs us hundreds