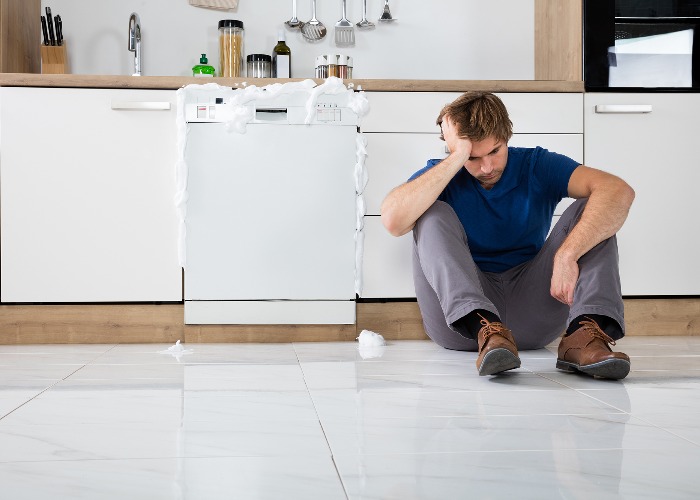 When you buy a household appliance, just how long should it last for and what can you do to extend its life?

Over the past few months, many of our household appliances have been on the fritz.

First, the washing machine packed in and then our 'frost-free' fridge freezer went on the blink when it filled up with frost.

And let's not mention the day my husband pulled out an electrical wire, and the circuit board went into a meltdown.

On top of this, there’s also a long-standing issue with our surround sound system, which has never worked properly since a friend's toddler played with the buttons too vigorously.

But rather than replace these broken or faulty items, my husband and I have always insisted on a DIY approach to get our money’s worth and do our bit for the planet.

Safety labels and industry standards: a look at what these common symbols mean

Our first port of call if anything needs to be fixed is always YouTube, although you should make sure you take any necessary safety measures to avoid getting injured.

Whether the computer is showing a random error code or my husband or I want to reset the clock on the oven, there is always a plethora of self-help videos online.

When our five-year-old fridge freezer started beeping furiously at us a few weeks ago, we found the troubleshooting section of the manual was not much help at all.

Turning the appliance on and off again did not work and neither did resetting it. We then noticed that the ice cream was starting to melt and realised the unit was losing its ability to keep cool.

So, we went to YouTube and found a sleek manufacturer's video with a handsome bearded man talking technical gobbledegook.

It appeared to identify the problem but gave no solution on how to fix it other than call out an expensive repair engineer. The manufacturer's quote for this was £120.

But after another quick search, we found a homemade video of a man holding his phone in selfie mode, demonstrating the solution in his own kitchen.

Using everyday language, he explained what the problem was and how to fix it.

He showed us what to unscrew and where the frost was hiding. We were able to defrost the 'frost-free' freezer and within a few hours, it was working again.

We also managed to partially fix our stereo with a YouTube video.

And my husband did eventually get the electrics back on thanks to another handy online tutorial video.

6 common plumbing problems and how to fix them

Unfortunately, the solution wasn't quite as easy for our washing machine, but we did manage to keep costs down.

The problem started when the washing machine decided it wasn't going to drain anymore, meaning lots of mornings were spent bailing out the drum and mopping up water all over the utility room floor.

I posted on a local Facebook group asking for recommendations and was advised to contact a local independent repair company. They came out within a few days after quoting me £60 plus VAT to fix the machine.

Had it been a smaller, more mobile item, I would have taken it to my local Repair Café where volunteers with tools, materials and specialist knowledge help fix items for free.

As it turns out, the washing machine was beyond repair as the electronics had corroded inside.

But since it was well over 10 years old, we didn't feel too hard done by.

In the end, we were only charged £50 as there was nothing to repair, although it did make me think whether we should have bothered getting it looked at in the first place and just bought a new one.

Protect your boiler from £9 a month with Your Repair

How do you know when to give up?

Knowing how long an appliance should last is tricky as most manufacturers do not give their products a lifespan although manufacturers Miele and ISE are among the exceptions.

According to the White Goods Trade Association, ‘there is no guarantee of durability in law.’

This means there is no way to say how long a machine should operate for without breaking down, and what the anticipated lifespan should be.

But most appliances are usually designed with a Mean Time to Failure (MTFF). This states the average time a machine will work although appliance manufacturers rarely publish these figures.

For example, some televisions have an average lifespan of up to 100,000 hours of use before failure.

The quality of a machine, and the price, will be a major factor in how long it will last. For instance, a low-grade washing machine will have a MTTF of 600 hours, while the highest-grade appliance may exceed 10,000 hours of use.

Generally, lower prices have also led to shorter lifespans meaning cheaper products are not built to the same quality, performance or longevity.

The White Goods Trade Association says the lifespan of a washing machine has dropped from over 10 years to under seven years, while cheap appliances may only last a few years.

So, knowing when to give up on a machine needs to be a balancing act between how much it cost, how long you have had it and how often you use it.

There are some interesting statistics in Australia and the US (but not the UK) that give a clearer indication of how long particular appliances should last.

There will be times though when a machine or device gives up and you feel it is just too soon. Even if you have not bought a warranty or extended warranty, it may be reasonable to expect an appliance to last more than a year.

This, in theory, is supported by consumer law, which states that goods should last a ‘reasonable amount of time.’

A few years ago, I successfully battled with Apple to get a replacement iPod when mine died after 18 months, but this may have been trickier had it been five years old.

The Consumer Rights Act 2015 states if a product is defective from new, then you can make a claim to the retailer for up to six years (five in Scotland) from the date of purchase.

Unfortunately, this doesn't give someone carte blanche to demand a repair or replacement if a machine breaks down within six years, and retailers are very savvy at dealing with complaints quoting consumer law.

When I tried this out on my fridge freezer retailer, they were quick to point out that it was up to me to prove it had been defective when I bought it.

Their customer service advisor emailed me the following:

"Given the time you have had the goods, the burden of proof is with you, the consumer, to demonstrate that the goods have ceased to work due to an inherent fault apparent from time of purchase and not, for example, due to fair wear and tear or improper maintenance.

“This would typically be demonstrated via an independent engineers report."

So, in this case, I have to spend money to prove the item was faulty at purchase – not just knackered from 'old' age.

I would argue that five years for a mid-range fridge freezer is not a ‘reasonable length of time’ but this seems to be subjective and where the law fails consumers.

Despite this, it is always worth making a claim and if this fails then try a local or DIY solution before ditching the appliance altogether.