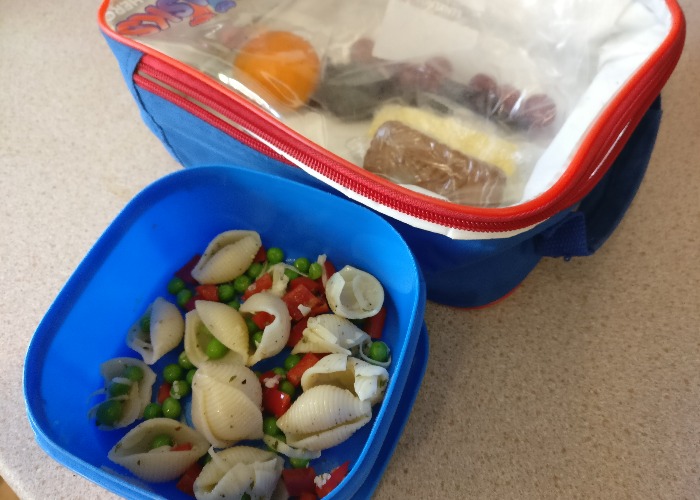 Is it possible to prepare a child’s packed lunch for school for less than £1 a day? Piper Terrett decided to find out.

My almost-four-year-old son recently started nursery school, so each day I’m preparing a lunchbox for him.

I’ve been surprised by just how much it can cost and how much uneaten perishable food can end up going to waste.

Our nursery teacher advised it was better to put too many things in his lunchbox than not enough as the children often get hungry and need a snack later in the day.

But, while some things like untouched boxes of raisins or Monster Claws can live to see another day, uneaten cheese slices, yoghurt tubes or loose fruit generally have to be disposed of for food safety reasons.

Fortunately, only water is allowed as a drink so as well as being healthy, that doesn’t cost us anything.

I decided to see if it was possible to make packed lunches for him for £1 or less each day.

Parents are under a lot of pressure these days to provide a healthy lunch.

At our nursery school meeting, we were told we were only allowed to provide healthy items (although I later found out that crisps and a small chocolate biscuit were actually allowed).

With the children eating a packed lunch every day, it’s easy for things to get samey – especially when you’re in a rush – and to spend lots of money on snack items.

So how can you provide a decent lunch for less that doesn't involve too much faff?

The first thing to stress is that the ability to shop around helps.

We are lucky in living near three towns with several different supermarkets, including Tesco, Asda and Aldi, but shopping around can be difficult to do when you’re a busy parent juggling work and school drop-offs.

The mySupermarket app is also useful as you can see where the best bargains are at different stores.

Cheap groceries: cut your food and drink bill with these tips and tricks

How the lunch budget breaks down

Shop around for bread and wraps

My son loves bread and has sandwiches in his lunchbox most days. He is fussy but will eat ham, cheese, and marmalade as fillings.

I’d quite like to mix this up a little and include wraps and the occasional pasta salad, although worryingly he did inform me that he “wouldn’t eat” the latter when questioned.

I sliced these in half.

Savings made buying Asda own brand vs Hovis bread and Tesco mini-wraps: £1.06

Most multi-packs of crisps were simply too expensive for my budget and I wanted to avoid my son eating them every day anyway, so I substituted popcorn instead.

It’s quick, healthy, cheap, and fun to make at home, and a 500g packet of kernels currently costs £1 from the World Food section in Tesco, or 92p in Morrisons.

If you don’t have a popcorn maker, you can simply cook it in a pan on the stove.

What’s more, just 12g of kernels makes more than enough for a small child to eat and costs just 2p, so you get your money’s worth.

Savings made making popcorn vs a 6-pack of Pom-Bear crisps: 98p

Fill them up with green stuff

Luckily, my son likes fruit and veg and I was keen to fill out his lunchbox with plenty of it.

In the reduced section in Sainsbury’s, I found a pack of red grapes for 79p, down from £2, and despite some misgivings, they lasted the entire week. These make a nice bite-size snacking option (making sure to chop them in half).

I also picked up a pack of six dessert apples on special offer in my local Co-Op for 99p, although I’ve since realised that a pack of six small Rosedene-branded apples in Tesco costs just 69p.

Deciding to experiment with carrot sticks, I got a 500g packet of carrots in Asda for 38p. My son also likes peppers, so I got a packet of three for 99p with the intention of doing pepper slices.

However, I found a 500g packet of sultanas in Asda for 99p and decided to make up my own packs. Each serving cost just 8p for 40g instead of 33p each.

Savings by making home-made versions vs shop-bought: 25p per pack on raisins, 15p per portion on cheese slices

My son has simple tastes when it comes to sandwich fillings, so I stuck with cheese and ham, with the addition of some veggies, such as carrot or pepper slices.

The problem I find is that ham goes off quickly – you’re meant to eat it within two days once the packet’s opened – which can lead to a lot of wastage unless you have a large family and can consume it all.

Any leftovers not used in the lunches would ideally be an ingredient in home-cooked meals.

Get healthy meal packs sent to your home with Mindful Chef

I was surprised to find that all of the options came in below the £1 price tag.

Obviously, my son is only nursery age, so an older child would have a bigger appetite and would want a bigger wrap or sandwich.

However, this would only add another 10p to double the size of the wrap (I used half a large wrap) or 2p for another slice of bread/another 10p for cheese or 8p for the ham. The pasta portion cost just 6p for 50g, for example.

Crazy for nuts? Order from Nuts Pick and earn rewards for every £1 you spend

But will your child eat it?

Of course, the real test is not just the price tag but whether your child will actually eat what you have prepared for them or if they are simply too attached to brand names to oblige.

I did find that the bag of sultanas came back uneaten, so I resolved in future to save the old raisin boxes and refill them or find a Tupperware box I could put them in.

The carrot sticks also repeatedly returned intact, suggesting I need to find a more appetising alternative – a shame as they are not only a cheap but healthy option.

The popcorn and sandwiches on brown bread were gobbled up, however.

So as with any lunchbox options, you may need to tweak and vary them, but it’s well worth shopping around and trying different alternatives to keep the costs down.

Feel inspired to make your own cheap lunchboxes? Have a look at this week's best supermarket offers for cheap inspiration.

Love your tea? Get up to 70% off selected blends with Twinings