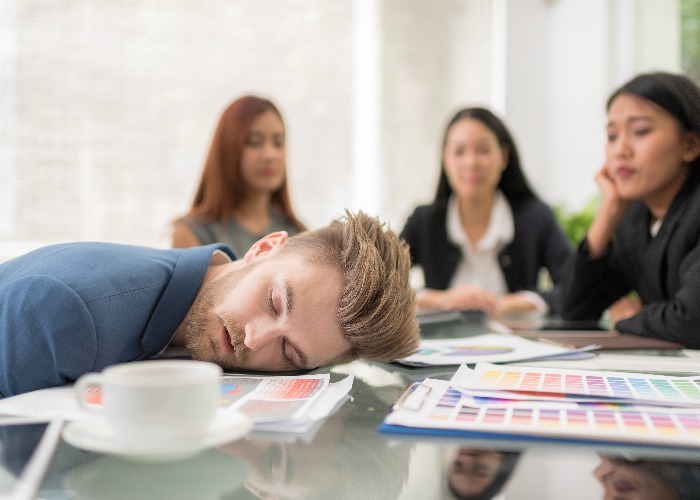 Too many meetings are an exercise in ego, preventing people from actually doing their jobs.

Do you feel like you get a lot done at work?

The UK’s apparent problems with productivity are regularly brought up by business leaders and the Government, with our country’s workforce often compared unfavourably with the Chinese, for example.

And while yes, British workers might be a little more likely to get distracted at work by Facebook or a reminder from their Fitbit to get up and get some steps in, there’s a bigger menace that’s hitting our productivity that is usually nothing to do with us humble workers, and entirely down to management.

Talking about doing things, rather than doing them

According to a new study, we are in the midst of a meetings epidemic.

Research by Moo reckons that the average worker spends more than four hours a week in meetings.

Over a year that works out a frankly farcical 26 days spent sitting there, silently praying for death’s sweet release, while Alan from accounts bores on about his spreadsheet.

That is bad enough, but the fact is that a big chunk of time is wasted ‒ even if the meeting is a corker ‒ just waiting for people to drag themselves into the room.

The study suggested that around 20 minutes of every 60 minutes in meetings is wasted, with lateness of participants a big factor, followed by issues getting technology up and running and trouble finding the right location for the meeting.

And then once the meeting does get going, a significant number of us aren’t paying attention anyway.

More than half of respondents admitted to daydreaming during meetings, with one in four have fallen asleep on at least one occasion during a meeting.

Let’s be honest, for many of us, meetings aren’t exactly hitting the spot.

Are you taking full advantage of your work perks?

I’ve been freelance for two and a half years now, and that change of situation certainly focuses the mind when it comes to how you spend your time.

I get paid for the articles I write and file, so the more time I spend on those, the more money I end up with at the end of the month.

I don’t get paid for meetings. So while some are important ‒ those with commissioning editors or contacts who could bring work my way ‒ and can be justified, others become more tricky.

Sometimes it’s useful from a research perspective, but often saying yes to meetings just means I have a lot less time in which to do the actual work.

It’s almost a form of presenteeism ‒ by having these ‘important’ meetings about strategy or for updates on how a project is going, it looks like you are all taking part in something meaningful.

But the reality is really rather different.

A better way to spend your time

It would be wrong to dismiss meetings entirely of course. There are times when they prove genuinely useful, whether that’s generating fresh ideas or in ensuring that a big project is developing as it should.

But to my mind there are a couple of obvious problems with most meetings. The first is simply that they are too long.

This isn’t the moanings of a millennial with attention deficit disorder either ‒ the truth is that in an hour meeting, it’s inevitable that focus is going to slip, particularly if you aren’t particularly involved with the discussion taking place.

By keeping meetings to no longer than half an hour you can help keep everyone focused on the actual subject at hand, and it provides a little bit of urgency to actually resolve any issues that crop up.

The second problem is too often meetings have more people present than really need to be there. We’ve all been sat in meetings where our presence was honestly a waste of everyone’s time ‒ we had little to add to the discussion, and so just ended up sitting there dreaming of being literally anywhere else.

If you trim down the attendee list to only those who absolutely do need to be there, then again it gives a meeting more energy and focus.

And those people who would usually be sat there, fighting the urge to fall asleep, can be back at their desks actually cracking on with some work instead.

Sadly, there will always be some workers who struggle to make it to the meeting on time, while technological cock-ups will never go away either. But shorter, more productive meetings don’t have to be a pipedream.