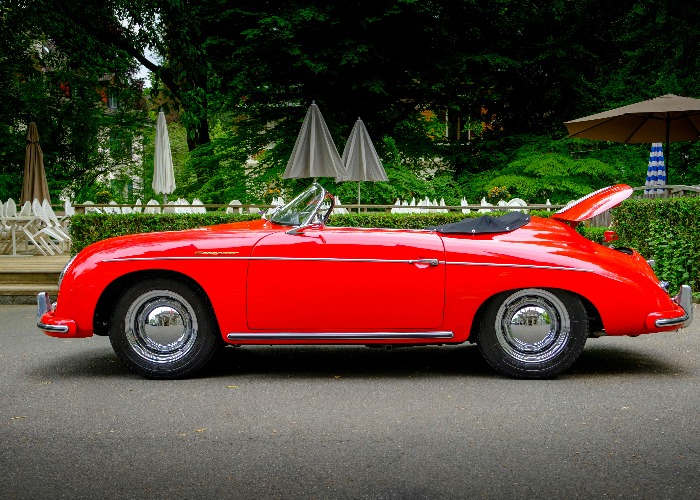 Driving a vintage Porsche or dining under rare art is undoubtedly more fun than picking shares. Just don’t expect to make much money from it, writes Sam Richardson

Luxury, like beauty, is in the eye of the beholder. It could be driving a 1956 Porsche through the Swiss Alps, relaxing on a boat in the Italian Lakes, or even owning part of a Tuscan vineyard.

And what if this life of luxury could earn you money?

For most of us, investing is painfully dull, requiring us to study percentage figures for on grey fact sheets which detail confusing and often intangible investments. You might own part of Google, but you wouldn’t know it.

Yet in recent years the wealthy have been making considerable sums of money from luxury investments: rare objects, sold for a profit, that come with the added fun of owning them.

Jewellery, coins, watches, wine and art all comfortably beat inflation last year, whilst over a 10-year span, the value of classic cars appreciated by 334%, according to the Knight Frank Wealth Report.

Until now, the upfront cost of investing has prevented normal people getting a slice of the action, but that could be about to change.

A Pedrozzini Capri is, ultimately, just a boat. To its admirers, however, it’s a handcrafted mahogany beauty that costs a sweet 350,000 Swiss Francs (approx. £272,000).

Clearly, that’s a sum that most people could only dream of, let alone stake on a boat in the hope of it increasing in value.

Whilst these numbers seem huge, many people have equivalent amounts invested in NS&I’s Premium Bonds, which don’t earn any interest in a traditional sense.

That start-up is TEND, founded by British and European bankers, with the aim of applying similar principles to timeshare to various luxury investments.

TEND disputes this label, however, as unlike some forms of timeshare, its users have actual ownership of the items they invest in and benefit from price appreciation. TEND uses blockchain technology to identify who owns what, acting as a platform and mediator for buyers and sellers.

Not only is the value of investments shared, but so is the experience. The site's 1956 Porsche 356 A Speedster can be driven; artworks are rotated between their owners’ houses and the abovementioned Tuscan vineyard can be visited.

Already launched in Switzerland, TEND plans to expand to the UK next year, giving everyday investors access to a whole new asset class. But should they take it?

To state the obvious, what distinguishes a luxury investment from a luxury it is the possibility that the former could make you money.

Unfortunately, that crucial distinction is often clouded by popular hype, none more so than around luxury art.

This peaked in November 2017, when Leonardo Da Vinci’s Salvatore Mundi sold for over $450 million (£342 million) having been bought in 1958 for $60, and breaking the world record for expensive paintings sold at auction (its authenticity has since been questioned).

It doesn’t require an understanding of the luxury art market to realise that Salvatore Mundi is not representative of other art investments, but many media outlets appeared to miss this point.

Taking a wider view, the Knight Frank Index appears to show the majority of luxury investments making a profit over a 10-year period (unlucky, furniture and ceramics owners).

Indeed, the overall value of the index went up 126%.

“That compares really favourably with other mainstream asset classes like equities or bonds” writes the editor of the Knight Frank Report, Andrew Shirley, “but we do have to bear in mind that with these luxury investments you have considerable costs associated with them”

Vintage cars need garages; wine needs cellars. But there are other, more serious risks that could prevent you from making a decent return.

Connolly cautions that “[whilst] headline performance figures may appear lucrative, it is important that investors fully understand the significant downside risks.”

For a start, these investments aren’t regulated by the FSCS or any other regulatory body if they go wrong.

Furthermore, they are illiquid: whilst you can sell your fund and company shares relatively easily, finding a buyer for a share in a vintage car could be extremely difficult.

And if you can’t find a buyer, it’s not like your luxury investment is earning income or paying dividends, explains Connolly, “so price movements are based solely on supply and demand”.

“So what you get is an investment which is expensive, unregulated and illiquid, with potentially volatile performance and that produces no income. This isn’t exactly attractive to most investors."

Instead, Connolly argues that a combination of cash, equities, fixed interest and property will meet the needs of most investors.

Stocks & Shares ISA: how does it work, 2018/19 limit, how to invest, fees, cheapest providers and more

Just because, say, Paul Newman’s Rolex Daytona watch sold for $17.8 million (£13.5 million) last year, it doesn’t guarantee that another Rolex, even if owned by a famous actor, will sell for that much.

Nor is telling a potential buyer that watches as an investment class appreciated by 5% last year likely to convince them.

Advocates of luxury investments, such as abovementioned TEND, point out that these investments are about passion and that the joy of owning them is difficult to quantify. There’s certainly something endearing about the idea that investing could be fun, and not just another weekend chore.

Opponents, like Connolly, warn against ‘collectable’ or ‘hobby’ investments, due to the downside risks.

Shares might be risky, but staking one’s pension or emergency fund on a single object, or even collection of objects, is far more so.

The super-rich may be able to take the hit, but regular investors could be left in serious trouble.

How risky are your investments? What ‘conservative’, ‘balanced’ and ‘aggressive’ actually mean