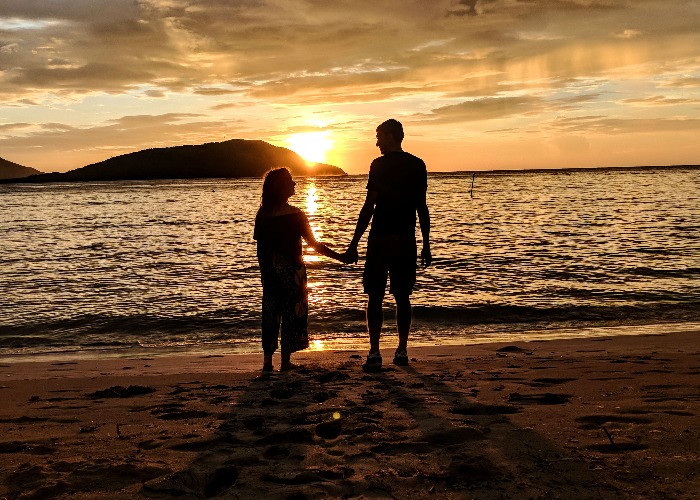 Lauren Hay and Darren McWilliam used every money-saving trick in the book to escape the rat race and explore the world.

In the UK, full-time employees get around 28 days' paid leave a year.

That’s on paper – once you factor in Christmas, days off spent waiting for deliveries and the fact that over half of us don’t use all our leave, the actual time you’ll spend on 'holiday' is substantially less.

But what if your holiday never had to end?

Lauren Hay and Darren McWilliam have been on holiday for 11 months. During that time, they’ve covered 16 countries, from Slovakia to Hawaii and are currently in Melbourne, Australia.

That wouldn’t be so surprising for a gap-year student, travelling on their parents’ money.

The difference is that Hay, 25, and McWilliam, 28, financed their trip by themselves, balancing all the responsibilities of careers, bills and rent whilst saving the thousands of pounds they needed to jet off and not come back.

This is how they did it.

“We could have put the money down as a deposit”

“Darren was getting cold feet”, jokes Hay, recalling the couple’s decision to spend their savings on travel: “we could have put the money down as a deposit.”

For most couples in their late twenties, the main priority is getting on the property ladder and settling down.

Saving up invariably means cutting down, and almost a third of prospective first home buyers cut down on travel, recent research from Nottingham Building Society suggests

Having been together for six years, Hay and McWilliam were just as keen to move in together, yet they found their careers, in London and Aberdeen, taking them further apart. Something needed to be done, McWilliam explains:

“We’ve been described as Peter Pans just avoiding adulthood as our main issue was that we knew we wanted to live together, but we couldn’t agree where. We felt travelling would allow us to trial a few places and jobs to help us decide.”

Still set on buying a house? Here’s how to do so – even if you’ve not got much of a deposit

We’ve all daydreamed at some point about quitting the 9-5, but actually doing so can be tremendously expensive.

Going on advice from friends, and data from cost-of-living website Numbeo, Hay and McWilliam estimated they’d need £3,000 each just to travel around Europe.

Outside Europe, the costs get even higher. Hostelworld estimates the cost of travelling around the world at £20,000, once you account for accommodation, transport, food and drinks, activities, visas, passports and vaccinations.

Then they set out to start saving.

Check out our sister-site loveEXPLORING for travel inspiration, tips and deals

The first step was for Hay to quit London and move in with McWilliam in Aberdeen.

Relocating made a huge difference to their budget: the average rent in Greater London was £1,632 a month in August, according to HomeLet, compared to £664 in Scotland.

Next, the couple sold their unwanted possessions. Selling McWilliam’s furniture on Facebook was relatively easy, but it took Hay a “solid afternoon” to sell her old clothes using Instagram-inspired marketplace app Depop (you can read our review of the site here).

Saving money also meant cutting out Netflix, Spotify and other magazine subscriptions, as well as meals out, although, Hay admits, “when it came to cheese and wine that usually put the budget out of the window!”

Instead, Hay and McWilliam ate in, using shopping sites like mySupermarket to find bargains and avoiding more expensive branded foods and medicines.

As they saved, they used the Money Manager smartphone app, which records your bills and receipts, to help them update their ‘Spreadsheet of Doom’ and get closer to their target.

Armed with their spreadsheets, Hay and McWilliam were not only able to save, but to make the money go further, explains Hay: “we budgeted £3000 each and ended £30 under budget”.

They were able to do this because of their careful approach to spending.

However, in Europe they found it cheaper and often quicker to take a bus, using apps like Flixbus to book international buses for “less than the cost of a pint”, as McWilliam recalls.

Cashback played a large role in their planning, with the ‘spreadsheet of doom’ including an entire column for cashback earnings, which helped offset their travel costs.

They used the Top Cashback internet browser plug-in to figure out which sites offered cashback.

One of these was Booking.com and they made the most of their ability to book accommodation – and receive cashback – whilst not having to pay the full balance until they arrived.

Once on the road, Hay and McWilliam used app-based bank Monzo to avoid charges for spending and withdrawing cash abroad (other fee-free bank accounts are available).

Of course, the money hasn’t lasted forever. Hay and McWilliam have worked in Switzerland, Greece and Hawaii, in exchange for accommodation with Workaway, a website that connects travellers with locals who need a job doing.

Hay and McWilliam are currently working in Melbourne, making their most out of their expertise in fashion and engineering to avoid the usual traveller jobs tending bars and waiting tables.

They’ve continued to record their spending on their blog, with a range of charts and tables explaining how much everything cost and whether they budgeted enough.

11 months in and McWilliam says that he and Hay are “still not any clearer where we want to ‘settle down’ or what we want to be when we grow up so avoiding adulthood continues.”

The couple plan to travel up Australia’s East Coast, seeing the barrier reef, before continuing to South East Asia, with their planned return date of July 2019 looking increasingly unlikely.

For Hay and McWilliam, ‘living the dream’ hasn’t got old and they want other travellers to follow in their footsteps. With careful planning, money shouldn’t be an issue, insists Hay: “you’ll always make it work”.

You can follow Lauren Hay and Darren McWilliam’s travels on their blog Faramagan, along with money-saving tips and budget planning tools