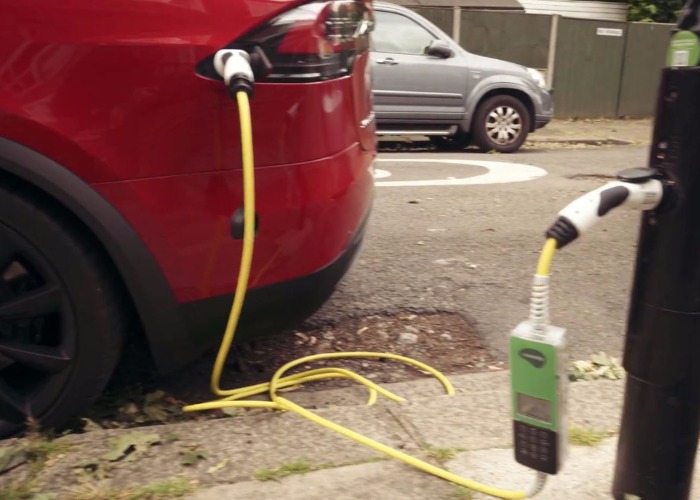 Owners of electronic vehicles can now charge their vehicle by simply plugging it into a street lamp after councils start adopting new technology.

Electronic vehicles may be cheaper to run than petrol or diesel cars, and kinder to the environment but there is one problem still putting people off buying them – finding somewhere to charge them.

Even big cities such as London, Birmingham and Glasgow don’t have enough public charge points to meet demand, leaving owners driving around trying to find somewhere to charge their vehicle.

Add in additional problems with reliability and multiple socket types and owning an electronic vehicle can be a real headache.

But, a new charging cable could be the answer.

German technology firm Ubitricity has invented a smart cable that can be plugged into existing street lamps to charge electronic vehicles.

There are 7.5 million street lamps in the UK and converting them is simple, and cheap, with the existing panel on lamp posts removed and replaced with one with a socket for £1,000 a time – that’s £5,000 less than the cost of installing standalone charging posts.

Councils can also apply for funding for the lamp post conversions from the ‘On-street Residential Chargepoint Scheme’, making this potentially the most affordable way to provide the charging stations needed.

Lamp posts in Richmond upon Thames, Twickenham, Hounslow and Barnes have already been adapted to have sockets.

“The Council has faced a number of challenges installing electric vehicle charging infrastructure in residential areas because of concerns around the addition of street clutter and the associated costs with installation,” Greg Edwards, Transport Planner at the London Borough of Hounslow, told the Daily Mail.

“There have also been challengers with implementing dedicated parking for electric vehicles, which we’ve found can cause friction between residents at a time when electric vehicles make up a small share of the overall market.

“We turned to Ubitricity for its solution because it addresses many of these issues.”

Electronic vehicle owners who want to use the lamp post sockets need to purchase a smart cable that costs around £50 more than a standard charging cable.

That cable can be plugged into any adapted lamp post and start charging.

A unit on the cable records al your metering and billing information and sends it to your Ubitricity or whoever your mobile electricity contract is with.

The cable can also be used in non-Ubitricity sockets – such as the stand alone charging stations.

When used in one of these sockets the smart cable operates in passive mode and doesn’t record any data.

Electricity prices are roughly in line with domestic rates at around 15p per kilowatt hour.

The only drawback to the smart cables appears to be security.

There is nothing to stop someone stealing your cable, or unplugging your car and plugging in their own to charge at your expense.