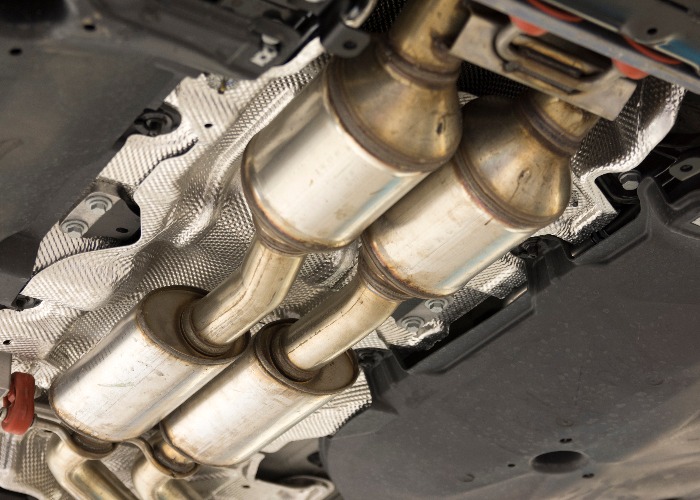 Drivers are being warned that their cars are being targeted by thieves, who are interested in a specific component rather than the vehicle itself.

Ageas Insurance said it has seen a “marked rise” in drivers reporting that their catalytic converters have been stolen since the start of the first lockdown a little over a year ago.

Before the lockdowns began, this form of theft accounted for around one in five cases, though this has now jumped to almost a third of all theft claims.

According to the insurer, most of these thefts have occurred when the car has been parked at home, whether on the driveway or the road.

However, there have been cases where thieves took the opportunity when it presented itself, nicking the converter from car’s parked in supermarket car parks.

Why are thieves targeting the catalytic converter?

So why are the thieves going so wild for the catalytic converter?

The RAC pointed out that it contains a honeycomb coated with precious metals, including platinum, palladium and rhodium.

From a practical perspective, brought together those items help to reduce and filter harmful gases from a car’s exhaust system.

The trouble is that those precious metals are not only good at clearing up what comes out of a car’s exhaust ‒ they also fetch a pretty penny on the black market. And that’s exactly what the criminals are hoping to do, nick the converters and sell them on based on the value of those metals inside.

The RAC noted that it isn’t unusual for thefts of this kind to spike, with incidents usually rising when the global values of the precious metals within a catalytic converter go up.

And go up they have, with the price of rhodium, in particular, having jumped by more than 200% since March 2020 to reach new record highs.

What is particularly troubling for drivers is that it’s not always obvious what’s happened when a catalytic converter is stolen.

Think about it. If my car radio has been stolen, it’s pretty obvious to me from the get-go. The smashed window or broken door lock is usually a good initial clue, and then there’s a hole where the radio used to be.

That isn’t the case with a catalytic converter.

I’m not sure many of us could even point at it on our cars, let alone notice if some wily thief has pinched it in the night.

Instead, drivers will only realise that it’s gone when their car is suddenly really noisy, and they call out a breakdown firm like the RAC.

It’s a serious issue too. According to Ageas, while the catalytic converter is just one component of a car, if it’s stolen it can cause the vehicle to be written off.

Protecting your car from the thieves

Clearly, our cars are catching the eye of these thieves, so it pays to think carefully about what you can do to make life tougher for them, and hopefully keep them at bay altogether.

Here are some of the steps suggested by the police to guard against this specific crime.