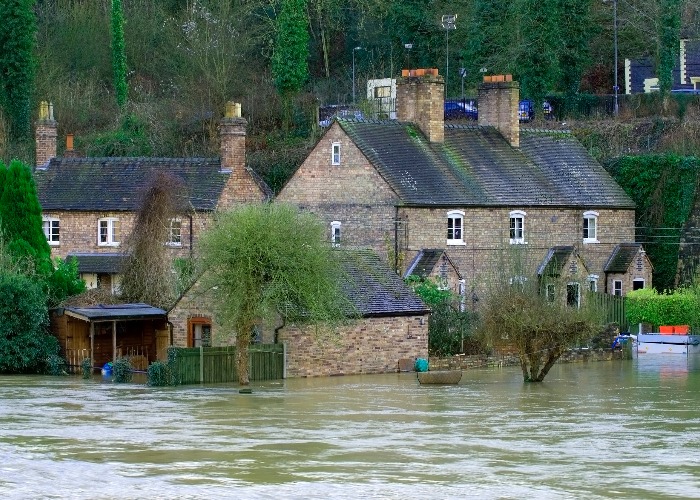 Living in an area at risk of floods can have a big impact on the cost of your home insurance.

There’s been no shortage of storms in 2021 so far, with Storm Christophe battering the nation last week and warnings that we may soon feel the effects of Storm Justine too, which is currently working its way across the continent.

The effects of these storms can be significant too, not just in displacing roof tiles but in leading to flooding. At the time of writing, there are a whopping 80 flood warnings in place for England alone.

Of course, some areas are more at risk from flooding than others, and it can have a serious impact on your finances in you happen to live in one of these places.

So which are the UK’s flooding hotspots?

Price comparison giant MoneySuperMarket has crunched the numbers from its home insurance quotes over the last year to determine which areas have seen the most incidences of flooding.

Here’s how the top 10 look, and how frequently homes in the towns are being flooded.

It’s worth reflecting on just how badly Hull is hit by flooding.

It’s not just that it has a significantly higher incidence rate than the rest of the top 10, but when you consider the national average stands at just 0.7% of homes flooded, it’s staggering how badly residents are struck by floods.

A whopping 90% of the city sits below the high tide line, which simply increases the chances of flooding, though there is some optimism to be taken from the fact that the percentage of quotes from the city declaring a previous experience of flooding are heading in the right direction.

Exeter and Hereford registering in the top 10 for the first time is also notable.

Hereford has jumped up the table sharply over the last few years, from 38th position in 2018 to 25th last year and now 10th.

MoneySuperMarket points to Storm Dennis, which badly impacted the city and the surrounding area last year as a likely catalyst.

At the other end of the scale, residents in Crewe and Luton are least likely to have flooding worries, with just 0.2% and 0.1% respectively of quotes declaring a precious flooding experience.

What difference does flooding make to my home insurance?

If you live in a property that has been flooded in the past, it can have a big impact on the cost of your home insurance. MoneySuperMarket reckons that a flooding claim will add an average of £72 to premiums, while quotes for properties that have previously been flooded are typically around £120 higher.

As someone who lives in a property that was flooded more than 70 years ago, I know only too well how something that happened decades ago can continue to cause you a higher than average bill, which I’ve detailed before on loveMONEY.

The introduction of Flood Re a few years back has undoubtedly improved the situation for plenty of homeowners who previously struggled to get home insurance on account of their flooding history.

Effectively, Flood Re ‒ an initiative between the Government and insurers ‒ takes on the risk of offering cover in the event of a flood, which is paid for through a combination of levies from the insurers and cash from the homeowners.

There’s no shortage of very grateful households who can now at least get some cover in the event of a flood, who previously were left to their own devices.

But in my case, it certainly hasn’t been cheap ‒ at best an extra couple of hundred pounds a year on top of a normal insurance policy.

It’s a difficult conversation every year when we debate whether to fork out for that cover or stick the additional money in the savings, hoping we never have to use it.

What can I do?

One thing that I have done, and which is well worth it, is to sign up for free flood warnings from the Environment Agency.

My phone and email go potty when it’s about to get wet, and if you live in a more at-risk area that sort of advance warning can make a big difference.

It’s also important to take some preventative measures to ensure that if there is a flood, the damage to your home is minimal.

That may mean investing in flood-resistant doors and windows to reduce the chances of water getting into the property, while if you think the water will find a way in you might want to take your valuables upstair to keep them safe.

It’s also a really good idea to keep your insurance policy somewhere safe that you can get to in the event of an emergency, and remember to take plenty of pictures of any damage as that will support a claim.

*This article contains affiliate links, which means we may receive a commission on any sales of products or services we write about. This article was written completely independently