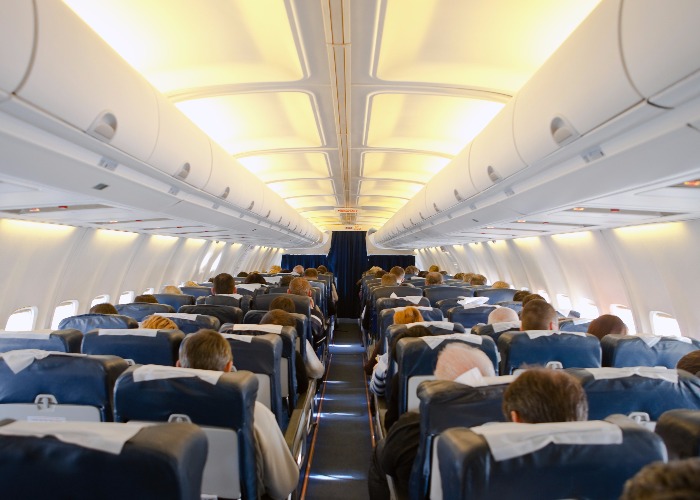 If your flight is overbooked, an airline can legally kick you off it, but not without considerable compensation.

Are you entitled to a seat?

Having made it through the airport, security and onto the plane, most of us would be disappointed to find another person already sitting our seat.

To make sure you aren't messed around, here’s everything you need to know about overbooked flights and your rights.

Airlines have extensive powers that let them kick you off a plane.

When you are on a plane the captain is in charge and their say is final. If they decide they don’t want you on their plane you have to disembark.

There are numerous reasons this could happen from you being deemed drunk and disruptive to a last minute change in the size of the plane meaning there isn’t enough room for everyone.

But, one of the most common reasons is that the airline simply overbooked the flight.

Whatever the reason if you’re asked to get off a flight you can politely explain why you really need to be on that flight – good reasons include weddings, funerals or if you have an important job that you are needed for such as surgery or a court case – but if your appeal is refused you need to get off that flight.

If you refuse to disembark the captain is entitled to seek assistance from airport security and have you forcibly removed from the plane.

The issue in the case of United Airlines is that far too much force was used and there are questions about how they selected that particular passenger to be removed. After all, he was a doctor arguing that he needed to be back at work treating patients the next day.

How to claim compensation for delayed and cancelled flights

Astonishingly, yes. It may be immoral for airlines to sell more tickets than there are seats on a plane but it is completely legal.

Airlines argue that overbooking benefits everyone as on any given flight an average of 5% of passengers don’t turn up.

By selling more tickets than seats the airline makes more money, passengers get to book on to a flight that might technically be full and planes are more likely to fly full, allowing airlines to keep fares low.

It's incredibly rare that passengers are denied boarding, however: the EU believes around 1 in 2,500 passengers are affected, a figure that includes alcohol-related incidents.

The right travel insurance can help with airline disruption. Compare policies with loveMONEY

Why you should volunteer

Typically, an airline will know a flight is overbooked – and too many people have turned up for the flight – before they start boarding.

This means they can start offering people compensation if they agree to take a later flight at the gate, rather than having to try and convince passengers who have already taken their seat to get off the plane.

If you can spare a few hours, and like to haggle, then volunteering could be well worth the hassle.

You could ask for hundreds of pounds in vouchers, airmiles, lounge access, and/or an upgrade to business class. Unlike those who are bumped involuntarily, it's up to you to negotiate compensation if you volunteer (although you are entitled alternative flight or refund, according to the Civil Aviation Authority).

You should push for compensation higher than the amounts given to passengers bumped without their consent, listed below.

Don't forget you are doing the staff and airline a favour, by allowing them to avoid an embarrassing situation.

If no-one volunteers to take a later flight airline staff then start choosing passengers who will not be allowed on the flight.

Usually, when deciding who to bump from a flight a variety of factors are considered.

These include how much you paid for your ticket, whether you are a member of the airline’s frequent flyer scheme, and what time you checked in. EasyJet has been accused of bumping passengers who didn't pay extra to reserve their seat.

Your profession may also be considered; if your job means you are going to be urgently needed and a delay would cause major problems.

If you get bumped, you are entitled to an alternative flight OR a refund, both in addition to compensation.

The airline will push you to take the alternative flight on its own planes, but if none are available soon then you could fly with another airline.

If you opt for a refund and are part way through your trip, the airline has to fly you back to your start point.

Cheap holidays: online booking tips to cut the cost of your next trip

If you opt for an alternative flight that departs soon, the airline has a duty of care to you while you wait.

You should be offered:

These are the same rules that apply to delayed passengers and only kick in after two hours for short haul flights, three hours for medium haul and four hours for long haul flights.

However, a little bit of politeness and negotiation with staff can go a long way, particularly if you volunteered to be bumped.

Am I entitled to compensation?

If you’re asked, or required, to take a later flight you’re entitled by law to compensation.

How much depends on where you’re flying from, where your airline is based, and how long you’re delayed by.

Compensation will only be paid if you checked into your flight on time (including online check-in).

If you are flying within Europe, departing an EU airport, or flying to an EU airport AND on an EU airline, you are entitled to the following:

In addition to compensation, your airline must also give you the choice of either an alternative flight – this can be the next available flight or on a date/time that suits you – or a refund.

The amount you are refunded will depend on your ticket and whereabouts in your journey you are. For example, if you are bumped from the outbound leg of a return flight you can get a full refund, but if you are on the return leg you would only get a refund for that part of the journey.

USA rules work on a sliding scale similar to the EU rules.

When claiming compensation, we recommend you always go straight to the airline, as soon as possible after the incident.

Avoid using claims management companies, who'll take a big chunk of your compensation for themselves, whilst providing limited assistance.

Ensure you get all the compensation you're owed by contacting the airline directly. Ask at the airline desk, look at the website or contact the airline for the form to begin this process. You shouldn't need to use a premium rate phone line

The Civil Aviation Authority also provides a template letter and advice on what details to include when contacting an airline.

If the airline still refuses to pay, then you can pursue legal action through the County Court.