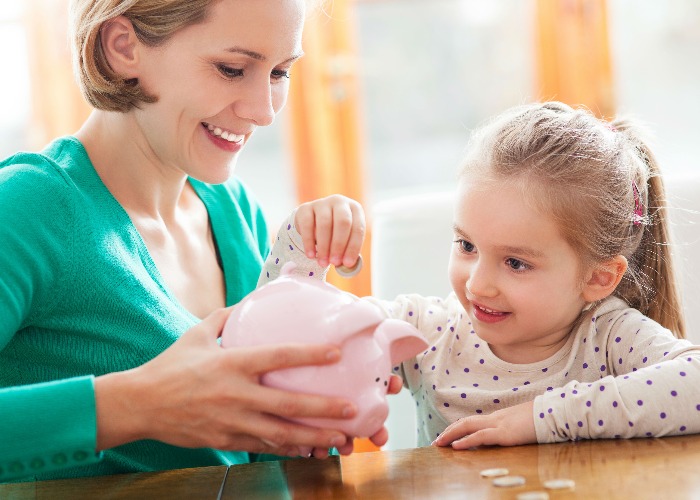 With physical money disappearing and scams multiplying, children may need more help than their parents can give them.

For most us, our relationship started with the humble piggy bank.

Into the ceramic swine went our pocket money and, occasionally, we were allowed to take it out for a new toy. That’s how we learned to save.

But what’s the point of a piggy bank when there’s no coins or notes to put in it?

Joanne McGee is a mum of two girls, Megan, aged six, and Tilly, aged four, and is just starting to teach them about money.

“The value of money needs to be taught a bit more about, I think, but that’s quite hard, especially as today we don’t see much physical money.

My girls see me shopping but I’m just handing over my card, or on the internet clicking on a button.”

She isn’t alone: 2017 saw card payments overtake cash – but at least most parents understand how a debit card works.

Brooklyn Andrew (pictured) is a mum of three and assistant secretary for her local branch of Foresters Friendly Society.

The problem is, you buy V-Bucks using real money.

“To buy them he’s using my card and I found it quite a struggle to explain to him the difference between that and having the money in bank accounts and physical money”, says Brooklyn.

“I wouldn’t have a clue what to teach them because it’s not something I do myself.”

Pocket money: how much should I give, when and how?

A gap in the classroom

With money changing so rapidly these days, it’s understandable that mum and dad don’t always have the answers.

The problem is, neither do school teachers.

A study by financial advisers OneFamily found that more than one in three parents struggled to discuss money with their children.

55% of secondary school teachers also believe there is not enough focus on preparing teens to manage their own finances.

Yet a similar proportion, 50%, rated their own school’s Personal, Social, Health and Economic (PSHE) education as satisfactory or poor.

A fifth of teachers surveyed said they only did the minimum required to tick a box, whilst 41% said the resources available to teach teens about personal finance were out of date.

Teachers said they were already observing the repercussions of limited financial education.

Many of their teenage students had unrealistic expectations of what they’d earn (observed by 45% of teachers), didn’t know the difference between a credit and debit card (38%) and some didn’t even know where money comes from (16%), according to OneFamily’s study.

So, what are children being taught about money in schools?

Citizenship is intended to deliver practical information: for example, children in Key Stage 4 (aged 14-16) learn about “income and expenditure, credit and debt, insurance, savings and pensions, financial products and services, and how public money is raised and spent.”

As the PSHE Association of teachers explains, “mathematics lessons can teach pupils to calculate interest rates but in PSHE lessons pupils develop and use critical thinking and risk assessment skills to evaluate whether, for example, having a card with sufficient credit to pay for something is the same as actually being able to afford it.”

It’s not clear, however, whether most children follow the citizenship or PSHE curriculums to the letter.

Schools are not legally required to teach the personal finance parts of PSHE, despite the Commons Education Committee calling for PSHE education to be statutory back in 2015.

Although citizenship education is mandatory to age 16, just 1% of pupils took the GCSE in citizenship in 2018.

With schools’ budgets being cut by 8% since 2010, and pressure to prioritise exams and grades, the sorry state of money teaching is understandable, but children are the ones losing out.

Online and smartphone app games - how to restrict your kids' spending

Should parents do more?

To make up the gap between teaching and reality, five in six teachers say that parents should do more.

Parents aren’t necessarily opposed: mother-of-two McGee says responsibility for teaching money should be divided equally, whilst Andrew says parents should take the lead: “you’re spending more time with them; it’s you taking them out shopping; it’s you who they see day-in-day-out, when you have to work budgets out and things like that”

The PSHE Association also advises that “ideally many of the topics covered in PSHE are a partnership between parents and schools. It’s not always guaranteed though, which is why schools should cover it as standard.”

“Official guidance recommends that parents start teaching their children about money when they are a toddler and it doesn't have to be taxing or complicated.”

Ferrari recommends that you start giving pocket money at age 6-7 to show them the benefit of saving.

If you need help with pocket money take a look at this article by loveMONEY journalist Felicity Hannah, herself a mum, who asked a panel of financial experts for their pocket money tips.

When children are a bit older, it’s time to consider getting them their own bank account.

Many high street banks offer accounts, cash cards and debit cards to those aged 11 or above. There's also a range of budgeting apps aimed at young people.

If you want to save for your child for the long term, you should consider a Junior ISA, which they’ll only get access to once they’re 18.

Money lessons for kids: how to teach your under-11 about finances

Growing up quicker than ever

Parents have always worried about their children squandering money, but the next few years could be particularly risky.

September next year will see thousands of teenagers born in 2002 receive access to their Child Trust Funds.

Launched by the New Labour Government, and discontinued in 2011, these were worth £250 (or £500 for low-income families) and many have since grown in size after being invested.

The Financial Conduct Authority has already warned that under 25s are six times more likely to trust an investment offer made via social media than over 55s, the group usually targeted by scams.

In some cases, Instagram ‘influencers’ impress young people with images of cars and jewellery, whilst persuading them to invest in highly risky investments such as cryptocurrencies.

Parents need schools to go beyond teaching children to add-up coins and address these all-too-modern threats. But with PSHE education still not mandatory, many children will miss out.

Teaching money at school has one final advantage, of which older generations are acutely aware.

A few well-spent hours in a classroom could reduce the need for a lifetime of learning through mistakes, sometimes at great expense.

As McGee reflects “I would have liked to have learnt about interest rates and mortgages…because that’s what real life is about really”.

Is your child due a £2,000 windfall? How to find a lost Child Trust Fund

If you’re not sure what to teach your kids about money, take a look at the Your Money Matters textbook.

It covers everything from saving to cybercrime, including some money-saving tips even you might not know!

It’s a collaboration between Young Money, which supports teachers, and money pundit Martin Lewis, and is integrated into the National Curriculum. You can download it for free online.