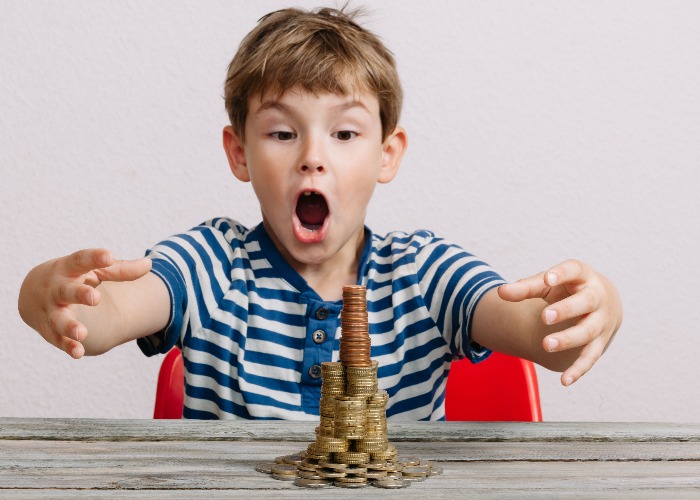 Our writer struggles to make pocket money a learning experience for her boys, so she's gone to the experts for advice.

Pocket money is part of childhood. For the kids, it’s a chance to take ownership of their spending and possibly blow the entire amount on sweets.

For parents, we fondly hope it’s an educational treat, helping our children learn basic maths, learn to save their money and helps them realise that blowing all their money on sweets isn’t a winner for anyone except the dentist.

Research from Halifax shows that the average amount of pocket money kids receive is £7.01, which is actually 3p down from last year, whilst four in five parents still give their kids cash.

Unfortunately, pocket money doesn’t work for my family at all.

I have a seven-year-old, five-year-old and two-year-old. The older two are definitely old enough to get pocket money but I just can’t work out how to do it.

Far from teaching them money skills, I risk spoiling them by making them expect a regular wad of cash to fund a big purchase. They aren't learning to save at all.

So I’ve been asking the experts how I can make pocket money work as a useful, educational opportunity.

Read more: 7 ways you're wasting money on your kids

When should I start?

I’ve been really on again/off again with pocket money because it simply hasn’t seemed to work for us.

Jamie Smith-Thompson, managing director at financial advisers Portafina, says that might be a mistake: “It’s a good idea to begin the pocket money game when children start to grasp the basic concept that money gets you things.

“And it’s fine to treat this as a game because receiving pocket money is a safe environment where children can learn the benefits of being financially responsible without any long-lasting repercussions.”

Okay, how much should I give them?

Knowing what a five-year-old and seven-year-old should be getting feels like a minefield. Some of their friends get huge weekly sums, others get nothing.

So what’s the right amount?

Smith-Thompson adds: “It’s a good idea to give your children a regular amount each week.  Making pocket money a regular event makes it easier for children to get into the habit of thinking about money and what they plan to do with it.

“It needs to be enough for them to be able to make a small and immediate difference to their lives -  in my day that was a pick and mix! Or, a bigger difference if they save a few weeks’ pocket money in a row. Saving is a great habit to get into and the younger a person gets into that habit, the better.

“As children get older the things they want tend to cost a bit more. If they’ve already developed the habit of saving, then increases in the amount of pocket money they get can be small and incremental. This also makes things easier for parents to manage.”

Right, makes sense. Maybe £2 and £3 respectively a week. So how do I make it educational? Here are some of the tips I was given when I put out a call for advice.

Junior ISAs: how to invest for your kids' futures, tax-free

I really struggle with this one as a parent, not because I spend loads on them but because I wanted them to never have to worry about money.

Just the other day I heard my eldest say ‘but it’s only £99!’ about something he wanted and I had to sit him down and explain that was a huge amount of money.

Ross Duncton, a spokesperson for BMO Global Asset Management, says that talking about where money comes from is an important step for parents.

“Before children can fully understand the value of money, it’s important for them to comprehend the idea that ‘money doesn’t grow on trees’.

“As a starting point, you could ask your children to list as many different jobs they can think of in one minute. Then ask them to categorise them in any way they wish – for example, jobs they’d like to do, jobs working outdoors or jobs based indoors.

“The idea is to get the child to think about different ways adults earn money and to help connect the direct link between the work adults do and their ability to buy things (food, clothes, toys, birthday presents).”

Get them to earn their money

Once children understand that adults work for cash, getting them to work for their pocket money seems like the logical next step.

Duncton adds: “A practical way to build on this idea is to get children to work for their pocket money themselves by doing odd jobs and chores at home, encouraging them to take ownership and responsibility for their own finances.”

But this has never worked for my boys because it seems to result in an expectation that I will pay them to do any work around the house when actually I expect them to do certain jobs just to help.

Smith-Thompson suggests: “Maybe start with a small basic amount of pocket money each week and let them know they can increase their pot by doing some basic chores.

“Using visual methods, such as charts and stickers, is a powerful way to reinforce the positive or negative effect their behaviour is having.”

Managing the expectations of children can be hard but Steve Ferrari, junior ISA spokesperson at family financial advisers OneFamily, says that’s one of the important lessons to achieve with pocket money.

He says: “With social media showcasing the lives of the rich and famous, children can get unrealistic about how much they can afford. Talk openly about the value of items, and what it takes to save and work towards them, this should give them a reality check.”

Paul Osborn, chief executive of the Foresters Friendly Society, says that making time to talk about saving and show them the perks of doing so can have life-long benefits.

“Even if it’s just 10% of their money going into a piggy bank or dedicated savings account each month, this gives children a chance to watch their money grow over time,” he says.

“Reiterating the importance of saving for the things they want most, whether that’s saving for a new bike or spending money for an upcoming holiday, helping them save for these will leave them feeling more encouraged to resist dipping into their money jars too often.

“It’s also great to let them know what steps you’re taking to save for their future. By being transparent about what you’re putting aside and how it’s accumulating, they can understand the impact that long-term saving can have.”

OneFamily's Ferrari even suggests that you consider giving children more pocket money if they choose to save it.

Opinion: you should be able to take your kids on holiday during term time

Let them mess up

This is something I definitely fail at. When I do give my children cash, I often find myself being quite controlling about what they can spend it on.

I don’t like to see them waste their money on small things when they want to save up for big things, and then I end up disempowering them and ruining the life lesson.

Ferrari agrees: “One of the best ways to learn, is to learn from your mistakes, and the same can go for spending money.

“Explaining the consequences to your child but still allowing them to make their own choices, gives them the opportunity to spend as they choose and live with the potential consequences if they regret it later on.”

I will get better at dishing out pocket money but I think letting them waste it to learn a life lesson is always going to be a struggle for me.

How did you manage pocket money? What are your tips for making it a success? Have your say using the comments below.