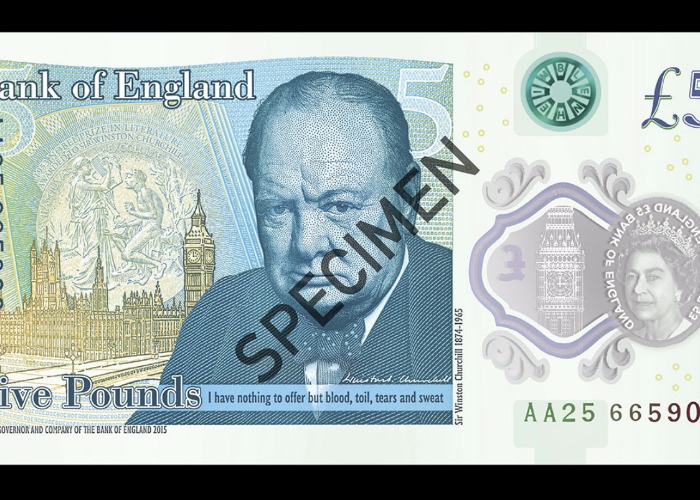 A brand new £5 note (pictured) has been launched by the Bank of England today (September 13).

The new note will feature Sir Winston Churchill on the front and has an array of new features making it more durable and harder to counterfeit.

While the note is now in circulation, it's unlikely you'll get your hands on one today: only certain ATMs in major cities currently stock the notes, while bank branches are only expected to have them within a week or so.

Here’s everything you need to know about the new fiver - and what to do with your old ones.

What is diffferent about the new note?

The old £5 note is made of cotton paper. It tears easily, doesn’t survive a washing machine cycle and is generally seen as pretty feeble when compared with other bank notes around the world.

Typically, a £5 note survives around 18 months to two years before it’s unfit to be in circulation.

It’s being replaced with the new Sir Winston Churchill bank note, which is printed on polymer: a thin, flexible plastic film.

Polymer notes are wipe clean, tear-resistant and expected to have around a five-year lifespan, more than double that of the old £5 note. And, yes, it should survive a turn in the washing machine.

The new note is also 15% smaller – but still bigger than euro notes or dollars – and hopefully it’ll be harder to copy.

It’s believed that changing to polymer £5 notes will save the Bank of England around £100 million over the next 10 years as they will stay in circulation for longer.

What new features can I expect?

As the below video explains, there are a number of features in place to help you identify a genuine £5 note.

For starters, there’s a large see through window with a portrait of the queen, with the words "£5 Bank of England" printed twice around it.

There is a coloured border around this image, which will change from purple to green when tilted.

There is also a finely-detailed metallic image of the Elizabeth tower will appear gold on front of note, silver on back.

At the bottom of the front is a silver foil patch containing hologram, which will change from word “five” to word “pounds” when tilted.

Finally, the number five will appear in bright red and green on the front under ultra-violet light.

Find out even more about the new fiver at www.thenewfiver.co.uk.

When can I stop spending paper £5 notes?

The old £5 note will gradulally be withdrawn from circulation as the new note is more widely circulated.

The Bank of England has said it expects the number of old £5 notes in circulation to have halved by January 2017.

You can continue to spend paper £5 notes until May 2017 when they will lose their legal tender status.

Will they be worthless?

No. All bank notes issued by the Bank of England retain their face value forever. This means you can take your old £5 notes to a bank, building society or Post Office and exchange it for a new polymer £5 note.

If the branch refuses to accept your old notes then you can exchange them at the Bank of England in London either by post or in person.

What about other note denominations?

After we’ve all got used to the new plastic fivers, you can expect to see more plastic in your wallet pretty quickly. New polymer £10 notes will be issued in summer 2017, featuring Jane Austen.

Images courtesy of Bank of England

The banking stories you need to read: