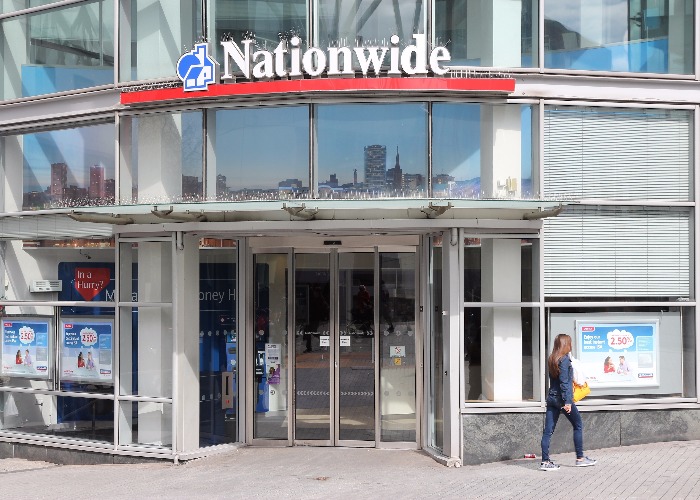 Nationwide has once again failed to warn customers they were about to be hit with overdraft charges.

Around 70,000 more Nationwide customers are in line to receive refunds after the building society fell foul of overdraft regulations for the second time.

New rules came into force back in 2018 forcing financial institutions to contact current account customers by text message informing them of any impending overdraft charges.

That way the account holder at least has a chance to pay money into the account and get out of the red fee-free.

Last summer, the Competition and Markets Authority (CMA) told Nationwide to refund £6 million to 320,000 customers after failing to properly notify them of fees they would face.

In an embarrassing repeat for the nation's largest building society, it's now emerged that a further 70,000 customers are in line for £900,000 in refunds after it failed to warn them they would be charged for entering into their unarranged overdrafts.

According to Nationwide, affected customers will receive an automatic refund into their accounts.

Speaking about the latest failure, Sara Bennison, chief marketing officer, explained: “While these members haven’t been overcharged, we appreciate these texts are designed to help people avoid unarranged overdraft charges, so we apologise that on this occasion we didn’t meet the high standards we set ourselves.

"We are contacting impacted members and will be automatically refunding the charges back into their account."

Nationwide is by no means the only financial institution struggling to get to grips with the requirement to keep customers informed.

Back in November, the CMA said both HSBC and Santander had repeatedly failed to notify customers by text and told them to refund all fees incurred by those who had gone into their unarranged overdraft.

Regularly in the red? Here are the accounts with the cheapest overdrafts

Fines for firms that break the rules

The CMA has in the past emphasised that these mandatory text alerts are vital to help customers avoid charges.

But while all banks have so far reimbursed customers (or will do so), none of them have actually lost anything as a result of having broken the order.

If there was a proper financial penalty for doing so then it would serve as a far more effective deterrent for any other firms tempted to shirk their duties.

But, at present, the CMA said it is unable to levy fines on the banks for such mistakes and is calling on the Government to sort this.

"Banks and building societies that fail to send customers text alerts saying they will be charged if they enter an unarranged overdraft are breaking the rules," said Adam Land, senior director of remedies, business and financial analysis.

"The fact that Nationwide is a repeat offender makes it even more serious.

"This is exactly the sort of issue we would expect to fine companies for in future, if the Government gives us the increased powers we’ve asked for."

Often in the red? Get a £250 interest-free overdraft with first direct's current account

Clamping down on expensive overdrafts

It’s worth reflecting on the fact that this action comes just a few months after the regulator announced a series of reforms to the overdraft rules.

These include preventing providers from charging higher prices for unarranged overdrafts than arranged ones and banning ‘fixed fees’ for borrowing through an overdraft.

On one hand, the simplification of overdrafts is a welcome move as it means customers no longer need to dedicate an afternoon to working out how much their overdraft actually costs.

Sadly, the simplification process has been a train wreck so far, with many people facing far higher overdraft costs than under the previous system.

Hopefully, the situation will improve, but in the meantime, those who regularly dip into the red should definitely take advantage of one of the few remaining accounts that still offer cheap and free overdrafts.