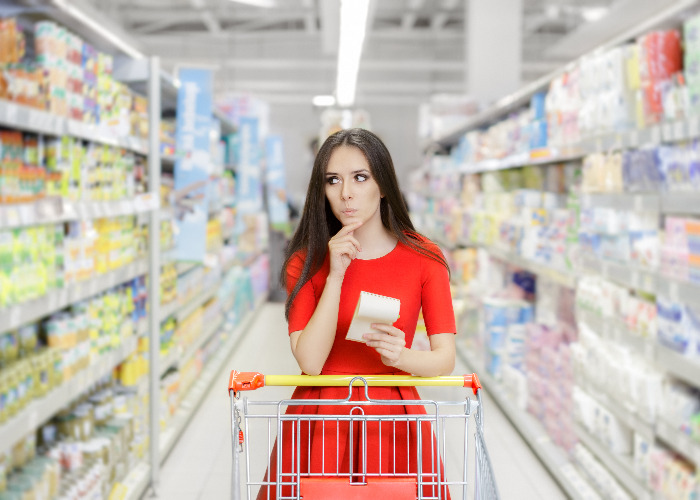 Confusing deals are tempting shoppers to blow their budgets.

Supermarket special offers like ‘buy one get one free’ (BOGOF) deals and multi-buys are causing shoppers to overspend by 21%.

That’s according to new research from the Money Advice Service, which found more than three quarters of shoppers (76%) are parting with around £11.14 extra per shop.

The MAS estimates this is costing the average person who goes to the supermarket more than twice a week nearly £1,274 a year.

The problem, according to the MAS, is that supermarket deals are often cleverly displayed and confusingly phrased, making it harder to work out if they are really good value for money.

To prove this the MAS asked more than 2,000 shoppers to select the best value option on four offers commonly found in supermarkets. Shockingly just 2% correctly identified the best deals in all four cases.

John Penberthy-Smith, Customer Director for the Money Advice Service comments: “Often deals can be difficult to understand and compare with other prices. Then there’s waste – even if the offers are cheaper, bigger packets or 50% extra are not always good value for money if we end up chucking most of it away.”

Supermarkets have been called out on confusing prices and offers before.

Back in May 2012 Which? revealed the tricks supermarkets used to con shoppers into spending including making products appear to be on offer when really they had been at the special offer price longer than the before price.

In November 2012 all the major supermarkets agreed to clean up their pricing to make sure promotions and special offers are fairly advertised.

But it seems people are still struggling to identify the best deals.

Should supermarket special offers be banned?

Following the figures released by the MAS, Sainsbury’s has announced it will be phasing out multi-buy promotions across its stores as well as online by August 2016.

The supermarket says its own customer research shows multi-buys are out of step with today’s shopping habits as value, waste and health are more pressing priorities.

Sainsbury’s claims the phasing out of multi-buys follows on from its pricing strategy to deliver lower regular prices every day. Since March 2015 Sainsbury’s has removed more than 50% of multi-buy promotions from its shelves.

Sainsbury's Marketing Director, Sarah Warby, said: "Careful management of household budgets, a growing awareness of the cost of food waste and more health-conscious living has driven a trend away from multiple product purchasing towards more single item purchasing. We have listened to our customers who have told us that multi-buy promotions don’t meet their shopping needs today, are often confusing and create logistical challenges at home in terms of storage and waste.”

Sainsbury's is the first retailer to make such a bold stand and pull confusing and wasteful multi-buy offers. Following the announcement rivals Tesco and Asda were also keen to be seen to be changing its approach to these shopping promotions.

A Tesco spokesperson said: "Over the last year, we’ve been reducing the number of short-term promotions to focus on transparent, simple, consistently low prices on everyday products that matter most to customers, including fresh meat, fish, fruit, and vegetables."

Meanwhile Asda has confirmed it has ditched 133 multi-buy products this week in favour of everyday low prices.

A spokesperson said: “We have always prioritised low prices over promotions, but we also understand that it’s about getting the right balance for customers. We’re pleased that our competitors are finally coming around to our way of thinking, but we will continue to lead the way. For example, this week alone we’ve removed 133 multi-buys in favour of everyday low prices and we’ve never used BOGOFs.”

Shopping with children also drove people to spend more. ‘Pester power’ adds up, with more than a quarter (26%) giving in to demands from their children and spending an average of £15.50 each visit to keep them happy.

Many were also tempted when waiting to pay. Nearly a quarter (23%) said they will pick something up at the till display, spending an average £16.28 in the process each time!

These influences mean only half or 51% of those doing a weekly shop managed to stick to a budget.

How to stop overspending

The MAS says preparation is the best way to curb overspending.

It found those that make a shopping list are three times less likely to blow their budget than those who don’t. Shoppers armed with a list spend nearly £200 less on groceries over the year compared with shoppers that go in blind.

Shopping when you aren’t tired and on a full stomach will also help you avoid impulse buys.

In addition, finding the unit price or comparing the prices of similar weight products can ensure you are getting value for money on special offers.

Can you work out the best deal?

Here’s the questions the MAS put to the shoppers in its survey. See if you can figure out what the best deal is.

Save money on your supermarket shopping: