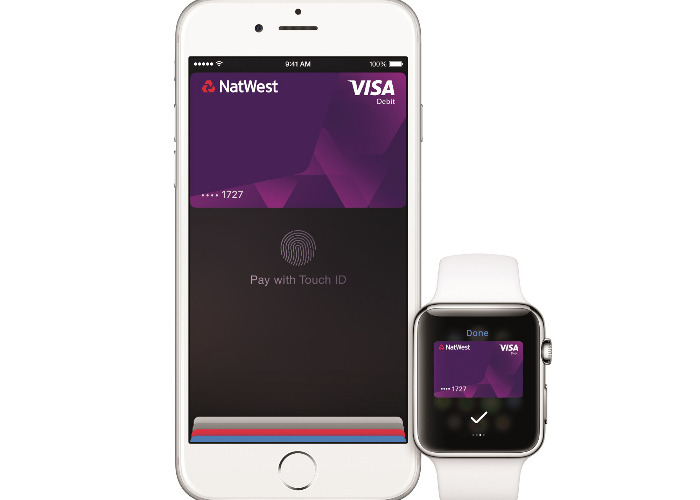 You’ll soon be able to make payments with just your iPhone, iPad or Apple Watch.

Apple has announced its payments service Apple Pay will be available in the UK from next month.

The service will allow users to make payments in-store and through apps with just their iPhone, iPad or Apple Watch at more than 250,000 locations.

Apple Pay will be integrated with Apple Passbook, which was launched in 2012 and allows users to store boarding passes, tickets, loyalty cards and more, but until now was missing a payments function.

Apple Pay allows you to link your credit cards and/or debit cards to make easy and secure payments through your Apple device in stores and through apps, rather than reaching for your wallet.

In stores, you’ll simply have to tap your iPhone 6 or iPhone 6 Plus on a contactless reader while keeping a finger on Touch ID.

The Apple Watch, meanwhile, just requires you to double click the side button and hold the face up to the contactless reader to make a purchase.

Shopping in apps with Apple Pay can be carried out with Touch ID on the latest iPhones as well as the iPad Air 2 and iPad mini 3.

How secure is it?

Apple boasts that using Apple Pay is more secure than using a credit or debit card.

That’s because every transaction will either require authentication via Touch ID or your passcode.

In addition your card numbers won’t actually be shared or stored on your device.

Instead a unique Device Account Number is assigned, encrypted and stored to enable payments and each transaction is authorised with a one-time unique dynamic security code.

Get an instant snapshot of your wealth anytime with loveMONEY's Plans: start your free 30-day trial now

Where can I use Apple Pay?

You’ll be able to make payments with the iPhone 6, iPhone 6 Plus and Apple Watch in hundreds and thousands of locations accepting contactless payments.

You’ll also be able to make payments within participating apps using the iPhone 6, iPhone 6 Plus, iPad Air 2 and iPad mini 3.

Which banks are on board?

Apple Pay will be supported by UK credit and debit cards from American Express, MasterCard and Visa, which are issued by many of the UK’s biggest banks.

HSBC, First Direct, Royal Bank of Scotland, Nationwide Building Society, NatWest, Ulster Bank and Santander customers will be able to add their cards to Apple Pay from its launch in July.

While Lloyds Bank, Halifax, Bank of Scotland, M&S Bank, Coutts, MBNA and TSB have said customers will be able to use Apple Pay later this year.

Get an instant snapshot of your wealth anytime with loveMONEY's Plans: start your free 30-day trial now