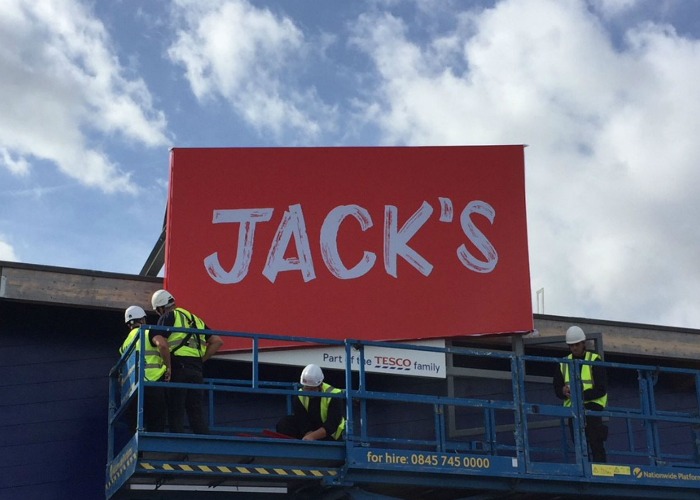 We visited Tesco’s new budget chain, which markets itself as cheap and championing British produce. Here's how its range and prices stack up.

Tesco has launched a new budget supermarket chain it hopes will rival Aldi and Lidl.

Named Jack's after Tesco's founder Jack Cohen, the new stores will have a more limited range of largely own-brand products, with “the "intention for us to be cheapest in town”, according to Tesco CEO Dave Lewis.

Jack's is officially launching its first two stores in Chatteris and Immingham on Thursday, with the aim to open 10-15 stores – a third of them repurposed Tesco branches – by the end of the year.

loveMONEY got a sneak peek at the Chatteris store and the new range of products.

You can still find a few well-known brands on the shelves #jacks #Tesco @lovemoney_com pic.twitter.com/WHoStHQlj5

How is Jack's different to Tesco?

Jack's has a far more limited range than Tesco and is two-thirds own-brand goods, although you'll find some well-known brands such as Lea & Perrins, Cornflakes and Roses.

There's a strong emphasis on British produce, with eight out of 10 items grown, bred or made in the UK, including all the fresh meat and milk.

Crucially, Tesco Clubcard collectors should be aware that you can't earn or spend Clubcard points at Jack's.

Prices are intended to be competitive with Aldi and Lidl and on par with the own-brand ranges in Tesco stores.

So how do these prices compare?

Going by this very basic comparison, it seems Jack's will be reasonably competitive with the German discount giants.

Also, don't forget to take a bag, or buy one for 10p or 55p in store. Jack's say customers will be able to choose between four local charities and community groups to benefit from its ‘Jack’s Supports’ scheme to fund local projects using the money raised by the sale of carrier bags.

Jack's is slightly smaller in size than Tesco superstores and relatively plain.

You'll find a bakery and florist section - which Aldi tends not to have - but no deli counters, clothes or mobile phones.

Like Aldi and Lidl, and unlike Tesco stores, in Jack's you'll find a 'when it's gone, it's gone' aisle full of high-value electronics, toys and other items.

These will be renewed every four weeks, depending on what Jack's is able to source cheaply. When we visited Chatteris we found an HP Laptop on sale for £125; a Dyson Vacuum Cleaner for £200 and a Sharp Sound Bar for £55.

Jack's differs from Aldi and Lidl however in having multiple checkout options, including manned tills, self-checkout kiosks and the ability to check out using the ShopSmart smartphone app (Sainsbury's is also trialling app-based payments).

Should I give Jack's a go?

Tesco believes that they can beat Aldi and Lidl by combining their wide range of suppliers with a cheaper store format.

Only time will prove if Jack's stores are consistently cheaper than the German discounters.

It's interesting that as Aldi begins to move into more luxury products, Jack's will focus on remaining cheap and British-sourced, Tesco CEO Lewis told loveMONEY.

However, given that only 10-15 Jack's stores will be open by the end of the year, it'll be some time until most shoppers have a chance to try one.

Get the best supermarket prices with loveMONEY's deals round-up, every Friday.