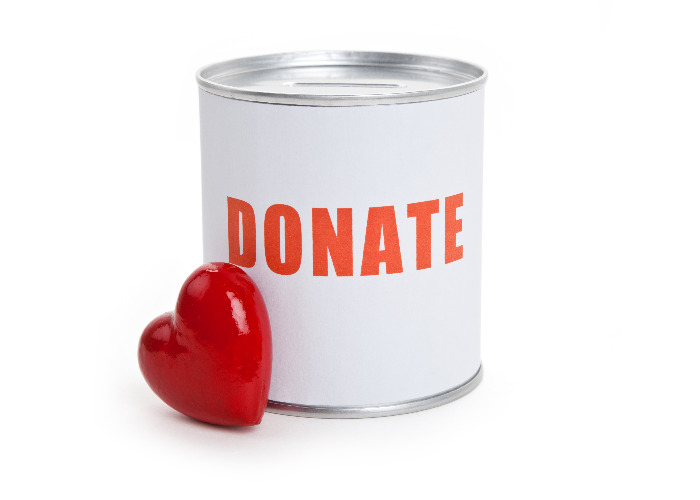 Here are 7 simple ways to donate to charity without having to spend more money.

I’d like to give more this Christmas and next year. Refugees, UK child carers, overseas aid emergencies – it all pulls on my heartstrings and makes me want to open my purse.

However, like many people I have a budget and it only allows so much charitable giving.

My husband and I have both chosen charities and we both make a monthly donation, on top of occasional coins dropped into rattling tins and food into the foodbank basket of our local shop.

But in the face of so many good causes, our small efforts can feel a bit microscopic.

We could always give more, because there are always more important causes.

So I started to wonder if I could give more without encroaching on my limited budget; if there are ways I can benefit more charities without doing too much damage to my pocket.

I decided to spend a few hours looking for ways I can give without paying more – and to evaluate if they were genuinely helpful.

Okay, this seemed like something I could get behind.

There are websites where you can routinely click a button or answer a quiz question and make a donation without it costing you a penny, paid for by the advertising being displayed around it.

There are a number of websites offering this service, most famously The Hunger Site where sponsors pay every time a button on the site is clicked.

Two-thirds of the food raised goes to the developing world, one-third to hunger in the US (but hey, hunger is hunger).

In one year alone, almost 30 million cups of food was distributed as a result of this website.

Each click is worth around a penny and the site itself is a profit-making organisation. It’s an easy daily win for a good cause, however.

While I like this idea and would like to participate, I am aware that I am unlikely to remember to do so each day and I’d almost rather pay out £3.65 up front than try.

But it is a free way to donate and there are a number of other sites offering it, including FreeRice.com, which is a quiz website.

It donates 10 grains of rice to the UN’s World Food Program for each right answer and I am much, much more likely to take part in this.

There’s no limit on how many donations you can make in a day and it’s fun – I can see myself playing while watching TV in the evenings.

Did you know that you can Gift Aid donations of belongings as well as cash?

If you’re anything like me you use charity bags as a handy way to dispose of clothes, bric-a-brac, toys and gifts you no longer need.

However, I recently realised that with the legitimate charities (rather than the commercial organisations that bung a donation out of their profits so they can use the name) it is possible to Gift Aid the stuff.

Take donations to the British Heart Foundation, which has many charity shops across the UK. If you complete a Gift Aid form, that you can collect from in store, you can add 25% to the value of what you give.

When the items sell, they let you know how much you have helped them raise and you then confirm that the money can be treated as a Gift Aid donation – meaning an extra government top-up.

Instant increase to the value of the donation, no extra effort on my part. Brilliant.

Use a charity credit card

Most people understand cashback credit cards – you use them for your regular shopping and get a small percentage of money back each time.

As long as you don’t leave a balance on the card then you can make easy money – although high interest rates make them unsuitable for anyone who doesn’t have the discipline to clear the debt.

Charity credit cards work in a similar way, often including additional donations when you first sign up.

I could see myself using one of these because it is so easy to make the donation, I don’t have to think about anything beyond clearing the balance each month.

However, the donations made are often very small; typically just 0.25%, which works out as 25p for every £100 spent.

Perhaps I should use a cashback card, with a higher percentage rate so that I can give more – but the additional layer of effort makes me wonder if I would do so.

An industry insider told me: “Look, yes people could make more from other credit cards and give that, but they don’t.

"Charities rely on these card donations so don’t try to put people off them! They’d just pocket cashback but with this they don’t feel like they are losing anything.”

I don’t know how many times a day I use search engines, but it’s a lot. Yet, by switching to the GoodSearch engine, which is powered by Yahoo, I can help raise cash for good causes – one US penny for each search carried out.

That might not sound like much, but it has raised more than $12.5m to date, and you can also shop through the website and raise even more cash.

There are also vouchers and coupons that provide money off for you, plus a 3-4% donation to the sponsor offering it. Win, win, win.

Fundraising while you shop

I can also raise money for charitable causes when I shop. Sites like EasyFundRaising have deals with more than 3,000 retailers, which promise to pass on some of their commission when I shop with them.

It does require me to register with the site first, but the effort is minimal.

It's true that I could do better by a charity by signing up to a cashback site like Topcashback or Quidco then passing my earnings on to charity.

However, much like with credit cards, the extra effort makes it less likely to happen, so a site that does this for me makes sense.

If I am going to spend money anyway then spending it with a charity instead of a commercial organisation seems like an excellent way to give without feeling the pinch.

That’s why this year I purchased cards that give 10% of the retail price to the Royal British Legion and Comic Relief.

It’s worth reading the small print before buying so that you’re clear on exactly how much is being donated, it’s not always as much as you think.

Read the best and worst charity Christmas cards 2016 for more.

In theory I could decide to give up café-bought coffees and donate the money I save, but in practice I would probably soon forget to donate that money.

There used to be an app where you could make pledges each time you went without, so that you knew how much you should donate at the end of the month.

However, it no longer seems to be available, so instead I am going to use hardware – a small notebook and pen.

We use salary sacrifice for a lot of things in the UK, including childcare and bicycles. However, there is an additional option that is very underused – payroll giving. The Charitable Giving organisation says that the payroll giving scheme is one of the most sustainable ways to make regular donations, since it was launched by the government in 1987.

It allows anyone receiving pay or a pension that is subject to PAYE to make a donation to charity from their gross income. A Charitable Giving spokesperson explains: “Once people have started through payroll giving, they tend to maintain their loyalty and give for longer than those who give by any other means. The scheme is easy to operate for employers and its simplicity maximises the amount of money charities receive.”

Payroll giving raises over £115 million a year in the UK. It’s great to read about a scheme like that, but it doesn’t help me (self-employed) and it definitely isn’t a way to give for free.

How much will I give?

It’s clear that I can give money to charities without spending any extra, but often it’s a very small amount. However, all those small amounts add up to a large sum for the beneficiaries, so I will undoubtedly keep going with some.

For example, I have become slightly hooked on the FreeRice.com website’s quizzes and checked that my British Heart Foundation Gift Aid form is still valid. Realistically, though, this is unlikely to add up to more than £20 over a year, and that’s assuming I donate more valuable items to the BHF.

If I make a real effort to occasionally go without small things – chocolate bars, coffees, magazines - and donate instead, that might be a further £30.

However, one thing that this has made clear to me is that hard cash handed over to a reputable charity is probably the most effective way I can help. Donations are good, volunteering is great, but all good causes need cash to work.

The good news is that in the UK we are already pretty hot at charitable giving. Research from the Charities Aid Foundation showed that 67% of people gave to charity in 2015, with a £14 median monthly average.

The mean donation was £37, so we give a fair amount as a people. What’s more, one in eight people had volunteered over the year, rising to one in four students.

So I will adopt some of the more effective practises above but I might also look at ways I can afford to give more this year – even if it’s just a small amount. Perhaps I could work an extra hour occasionally and donate that. Little and often is probably the best way to give more without feeling the pain.

What do you think? How do you give to charities and will you try any of these methods? Have your say using the comments below.

loveMONEY Awards: have your say and you could win a £100 voucher!

Credit card mistakes that will cost you money