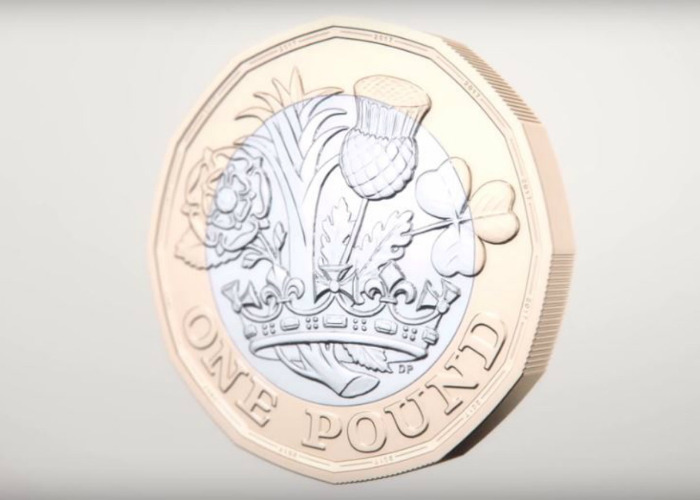 The new 12-sided £1 coin enters circulation today (28 March), replacing the 'round pound'. Here’s everything you need to know.

Where to get the new £1 coin

Collectors have been able to purchase commemorative versions of the new £1 coin for weeks, but today (28 March) marks the first day that people can get their hands on the standard version.

In total, there are 33 bank and post office branches across the UK that currently stock the new 12-sided coin. You can view the full list here. It will probably be days, if not weeks, before we see the coins in general circulation.

The new £1 coin is 12-sided with grooved edges on alternate sides.

It is also bimetallic – like the £2 coin – with an outer gold-coloured ring made from nickel-brass and a silver inner made from a nickel-plated alloy.

The coin also features the fifth coin portrait of the Queen. Designed by Royal Mint designer Jody Clark it is the first time a Royal Mint engraver has been selected to create a royal coinage portrait for over a century.

His design was chosen from a number of anonymous submissions.

The tails side of the coin show the English rose, Welsh leek, Scottish thistle and Northern Irish shamrock emerging from one stem within a royal coronet.

The image was designed by 15-year-old David Pearce and submitted into a public competition alongside 6,000 other entries.

The new £1 coin is slightly larger than the old pound coin but is thinner and lighter.

Why has the Mint replaced the old £1 coin?

The old pound coin hadn't been changed since it was introduced in 1984 to replace pound notes.

Such a long period of circulation has given forgers ample opportunity to perfect their fake coin designs.

As a result, there are a huge number of counterfeit £1 coins in circulation. The Royal Mint estimates that one in 30 pound coins is a fake.

The new design is much harder to forge and includes a number of new security features.

This includes a hologram-like image that changes from a £ symbol to the number depending on your viewing angle.

It also contains a secret material inside the coin itself, which can only be detected when scanned by payment machines.

As a result, the mint claims it is the most secure coin in the world.

It also has a “hidden high security feature” built into the coin to protect it from counterfeiting, according to the Royal Mint.

How the new £1 coin is made

The whole process, from melting metals to sriking the coins, is carried out at the Royal Mint's factory in Llanistrat.

To learn more about how the coin is made, have a read of this article on the striking of the new £1 coin.

When do I have to stop using the old £1 coins?

From Sunday October 15, 2017 the old pound coin will stop being accepted by businesses.

If you have any you will be able to swap them at Post Offices and most banks.

But before you do, check whether you own one of the old £1 coins that are worth up to £25.

Businesses are concerned about the cost of converting machines to accept the new 12-sided coin with the prospect of a six-month period where both coins have to be accepted proving particularly galling.

Supermarket trollies, vending machines, gym lockers and arcade machines will need to be upgraded to accept both designs during the transition period.

“SMEs have already had to adapt to a number of changes, such as pensions auto-enrolment and the prospect of quarterly digital tax returns, so the introduction of a new pound coin only adds to the burdens placed on small businesses’ shoulders,” Clive Lewis, head of enterprise at the Institute of Chartered Accountants, told the Independent.

“The financial hit SMEs will have to take in preparing for the new pound coin will divert attention away from running their businesses and dealing with the economic consequences of Brexit.”

Local councils are also complaining about the cost of adapting parking meters to accept the new coin.