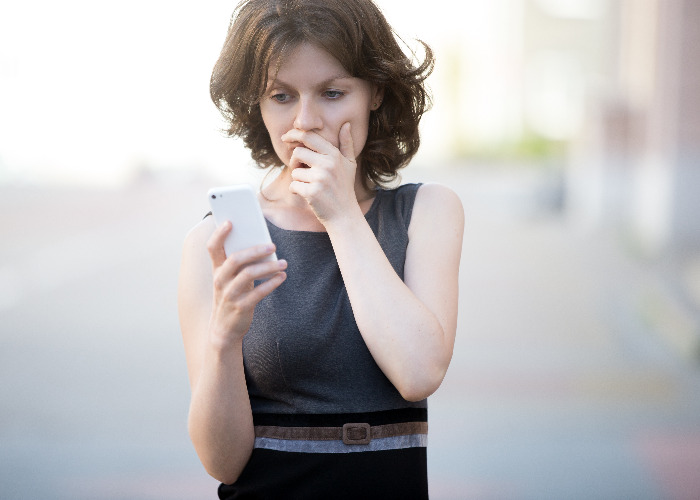 The Chartered Trading Standards Institute, a body representing trading standards professionals across the globe, has issued a new warning over gas bill email scams that have been brought to its attention.

The email cautions the recipient that they owe money to the energy giant, having failed to pay a previous bill.

And it warns that if they do not clear that outstanding balance within the next two days, a fine of £140 will be charged “to cover our reasonable costs”.

Just to ramp up the fear factor, the email then adds that if necessary there will be a home visit in order to collect the debt, which would lead to a further charge of £540, while if a home warrant is required then another fine of £750 will be issued.

Should the recipient want to avoid these financial concerns then they can follow a link in the email to a payment page and clear their ‘debt’.

Of course, this email is a load of old rubbish.

Not only is there no debt owed to British Gas, but if you make the mistake of following the link and sharing your details, the scammers will put them to use by clearing out your accounts.

But I have no doubt it will be effective in tricking some innocent victims, and not simply because the email itself looks quite convincing with its use of the British Gas logo and typeface.

The reason that scams like this can be so effective is that they tap into the fear normal people have of doing the wrong thing, of having made a costly mistake with their finances.

If you are told that you’ve missed an energy bill and face the potential threat of additional fines and even home visits in order to collect the debt, then of course you are going to feel a sense of panic.

You’ll want to clear that threat. And it’s that desire to put things right which can lead to the making of some terrible decisions, such as clicking on the dodgy link in the email and the sharing of your details.

That panic can lead you to overlook the telltale signs that scam emails like this aren’t on the level, such as the typos or the occasionally clumsy English.

When emotions kick in, our normal sense of logic can desert us. Over the last couple of years scammers have duped an awful lot of people with a scam where they pose as HMRC and demand victims clear a fictional tax bill, by purchasing iTunes vouchers and reading the code down the phone to them.

Now, in the cold light of day, this scam is ridiculous. Why on earth would the taxman actively suggest the paying of a tax bill through gift cards?

But it’s precisely because of that panic, that moment when you feel the fear deep in your gut, that you overlook how daft it is and hand over the cash. 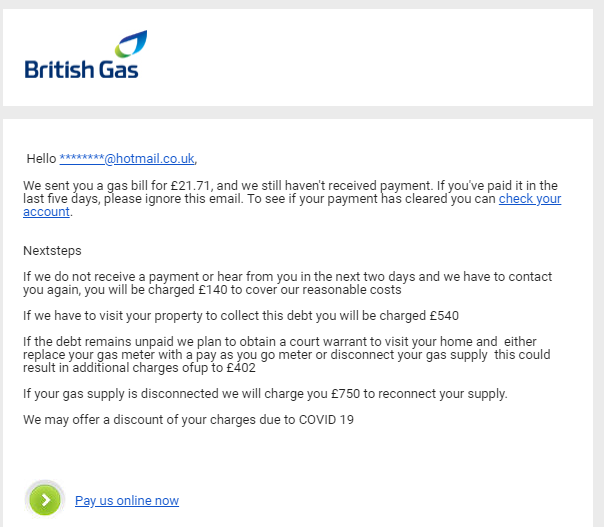 Covid-19 and the opportunity for the scammers

This is an understandable reaction at the best of times, but many of us are all the more susceptible to these scams at the moment.

The situation with Covid-19 has left many people fearful over their finances, given the rising levels of unemployment and the dire warnings of worse to come.

If you received an email like this British Gas scam last year, you may have shrugged it off without a second’s thought.

But in 2020, if your finances are already stretched and a plausible-looking email arrives warning you could end up out of pocket by hundreds of pounds if you don’t move quickly, it may take you longer to spot it’s a scam, if you do at all.

In a submission to an Australian governmental select committee this week, Google revealed that it is seeing a huge spike in scam attempts “as bad actors use Covid-related themes to create urgency so that people respond to phishing attacks and scams”.

In total it has detected an incredible 18 million malware and phishing messages being sent every day directly related to the pandemic.

The sheer scale of Covid-related scams is extraordinary.

From selling hand sanitiser that doesn’t exist to posing as banks, energy suppliers or even the taxman, there seems to be no limit to the opportunities presented by the pandemic for scammers to con us out of our cash.

So take your time, be extra vigilant and don’t allow that rising sense of panic to allow you to make mistakes you’d normally avoid with ease.