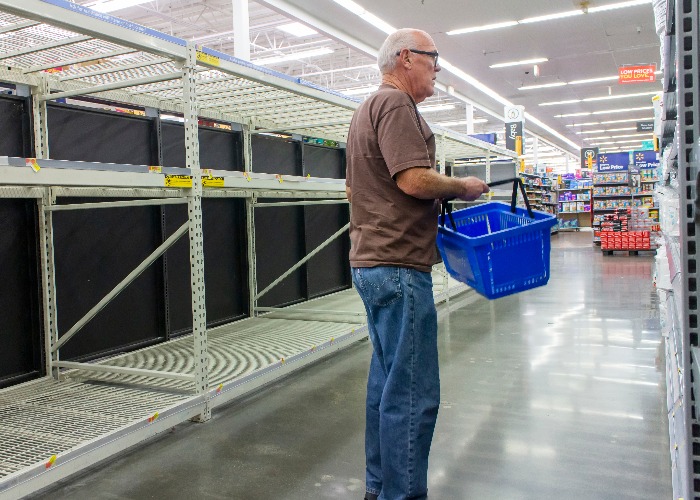 Plenty of supermarkets are operating special hours for old or vulnerable shoppers, but they aren’t policing them properly.

With the panic-buying showing no sign of ending, there’s no question that having specific time slots set aside for older and vulnerable shoppers is a good idea currently.

For starters there’s the simple fact that these are some of the people who are most at risk from Coronavirus, in most danger of ending up in hospital should they catch the virus.

By ensuring they can shop away from younger people, who may have no symptoms but be carrying the virus, supermarkets can limit the risks of the virus spreading.

Being able to get what they need

But perhaps more importantly there’s the issue of stock, or rather the lack of it.

Shoppers up and down the nation have panicked, somewhat understandably, at the situation and the potential of being confined to their own home for weeks at a time.

And the way they have reacted has been to load up on food, buying far more than they normally would to the point that shelves have been stripped and left bare.

In a press briefing at the weekend, Helen Dickinson, the chief executive of the British Retail Consortium, said that there was £1 billion more food in homes across the UK compared with just three weeks before.

And it’s led to the distressing sight of old people unable to get the typical staples like bread and milk.

Having a set hour or two for older people, health workers or those with other problems to walk the aisles in relative peace, and pick up what they need before the hordes then descend on the supermarkets is a sensible way to prevent this, or at least reduce the chances of it happening.

The reduced hours in force

Asda has emailed customers to appeal to them to stay away until 9am unless they are “vulnerable”, or care for someone in that position.

The trouble is that its actual website doesn’t say this, only making reference to the fact that NHS workers will be prioritised in larger stores from 8am to 9am on Mondays, Wednesdays and Fridays.

Sainsbury’s meanwhile has said that 8am to 9am will be dedicated to “elderly customers, disabled customers and carers”, while Morrisons has introduced an ‘NHS hour’ between 7am and 8am from Monday to Saturday, but nothing for older shoppers.

You can read more about the measures introduced by supermarkets in our guide to supermarket shopping restrictions.

What’s notable is that while many supermarkets are being very clear about the fact that they will be checking ID for NHS workers who want to take advantage of these special hours, there’s little discussion of how they are running the timeslots for older workers, or more to the point how they are keeping people out who aren’t on the old side.

We all need to do more

The trouble is that in some cases these special hours for older shoppers are being abused.

We have heard from some loveMONEY readers that these timeslots are being treated as ‘advisory’, with supermarkets relying on younger shoppers to be considerate and stay away.

I’ve heard much the same from older family members, who expected to have the run of the store to themselves.

Some supermarkets have proirities online delivery slots for older shoppers, but they aren’t particularly confident online, so they are entirely reliant on shopping in person.

As we have seen throughout with the Coronavirus situation, relying on people demonstrating common sense and following advice is not proving that effective.

Whether it’s ignoring these slots for older shoppers or congregating in national parks, there’s little doubt that an awful lot of people view this sort of ‘advice’ as something that they can opt out of, worry-free.

And that’s simply not acceptable. If a supermarket is going to run limited hours specifically for older people, then it needs to police them.

That means more security at the front door of all shops with elderly shopping hours checking ID, and ensuring that if someone is there to help an elderly relative they aren’t simply using it as a ruse to get their own big shop done while nanny leaves the store with the bare minimum.

After all, the supermarkets’ bottom line is getting a boost from the heightened levels of food shopping many people are doing.

They are undoubtedly working incredibly hard in keeping the shelves as replenished as possible, but the least these bosses can do is protect those special hours for older and vulnerable people.

However, just as supermarkets need to raise their game, so too do the rest of us. Keeping calm and shopping sensibly means that there will be plenty of food to go around.

Respecting these designated hours for older shoppers, rather than barging in because it's simply so important that we pick up that extra pack of beef mince, has to be the way to go.

The bitter joke of the austerity years was that the talk of "We're in it together" was absolute cobblers.

But it's not this time around – there's no other option, we simply have to work together.

Have you been to the shops during these dedicated hours? Please share your experience in the comments section below.