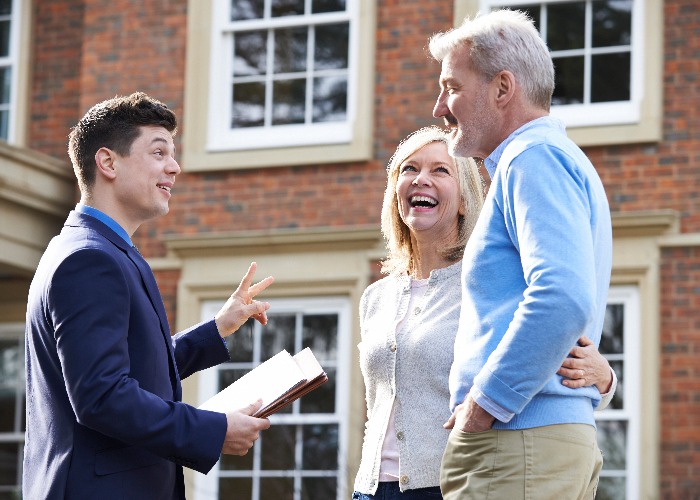 One online agent guarantees what it can sell your home for. But is it worth the money?

There are few professions that attract the same levels of distrust as an estate agent.

That’s the same figure as journalists (ouch), and only slightly better than professional footballers and politicians.

But the estate agency world appears to be changing.

Recent years have seen a succession of online agents launch, promising to help you sell your home for a fraction of what the big names charge.

And now there’s Nested, an agent which guarantees the amount you’ll get for your home, actually putting its money where its mouth is.

Moving home or buying for the first time? Search for a cheap mortgage

Nested, which currently only operates in London, provides two valuations from the outset.

The first is what they believe the property is worth, and the second is a ‘guaranteed’ fee, typically of around 95% of the full valuation.

If the property sells within 90 days, you’ll get the full sale price, minus fees.

But if it doesn’t sell in that time period, or it sells for less, then Nested will hand you the guaranteed fee.

In other words, as soon as the firm agrees to sell your home, you know for a fact the minimum that you will have at your disposal to put towards your next property, and precisely when you will have that money.

That’s a big plus for any buyer, as you are effectively becoming chain-free, which makes you far more attractive to any vendor as it means they will be able to move swiftly too.

Matt Robinson, co-founder of the firm, says that the problem with traditional estate agents is that they can make “meaningless” promises, with no repercussions.

“I think it’s right that the people making those promises, around what price they can get for the property and how quickly it will sell, have that skin in the game,” he said.

“If we can’t sell the property, then we are on the hook. That pressure puts us in the place to do the right thing for the client.”

Is this a way to take advantage of distressed sellers?

I’ve heard from enough agents over the years promising a ‘quick sale’ that alarm bells went off.

Is this not just a way to push people who might be struggling to sell their homes for significantly under market value?

Robinson insisted that this isn’t the case. “I didn’t want to do that; it’s predatory,” he said.

“With a rising market, I want to see us in a place where we could write guarantees at more than 100%. Why not?”

There are two parts to Nested’s fees. The basic fee is between 1.5% and 2% of the guaranteed price.

If Nested manage to sell the property for more than the guaranteed amount, then an additional fee of up to 1% is charged.

The basic fee isn’t that different from a high street agent, though if the property does go for more than the guaranteed amount you are going to be paying a premium.

Essentially, you are paying more for the certainty of knowing exactly what money you will get for your home and when.

Does it actually work?

Greg Shannon, an architect, turned to Nested in order to sell his Dulwich family home after finding a dream seafront property.

A previous buyer had fallen through, so while time was of the essence he had a good idea of what his property was worth and said that the Nested guaranteed price “came in at around 95% of that”.

“There is no way we could have bought our home without Nested. It was the perfect solution for our situation,” he said.

“It won’t be for everyone – if time and certainty isn’t an issue then there’s no reason not to go down a more conventional route.

“But if those things are an issue, then it’s a smart innovation.”

But having raised more than £50 million in funding over the last couple of years, it has big expansion plans.

Robinson pointed out that because of the model, Nested is best suited to specific areas, with cities like Manchester, Bristol and Birmingham the most likely.

Search for a cheaper mortgage rate

Would I use Nested?

I can absolutely see the appeal of Nested. When I bought my first house I was able to get a massive discount off the asking price precisely because I wasn’t in a chain and could move swiftly.

That isn’t uncommon, so if you need to be able to move quickly to snap up that dream home, then the fees won’t be so much of an issue.

But if I didn’t need that speed and certainty they I’d probably stick to an old-school agent.

The important thing really is that vendors actually have distinctly different services to choose between, rather than a handful of agents all doing much the same thing.