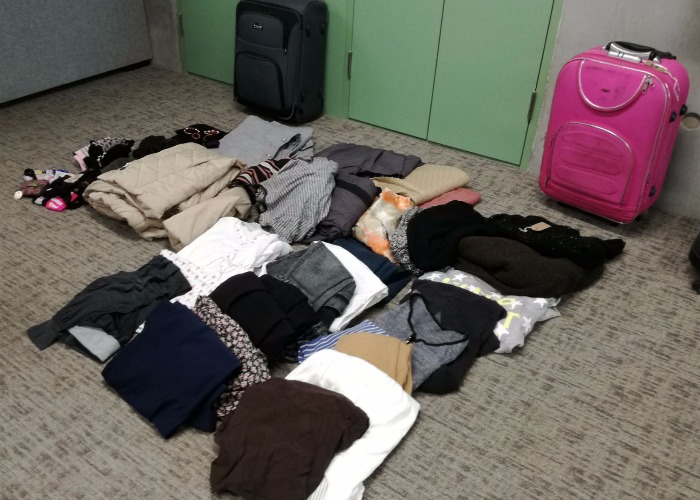 Some people claim to make a pretty sum from selling lost luggage. Anna Jordan takes on the challenge to see if it's true.

This month's challenge involves a lot of selling, so if you're awash with junk and keen to make some extra cash, this one's for you.

You may remember the lost luggage auction I went to a little while ago, in which I bagged an interesting mix of items for £28.

The suitcases I bought are now taking up a considerable amount of space in my room, so the only solution is to get rid of them and all their contents.

To maximise my chance of getting the best price, I’m going to split the sale of goods three ways: eBay, a Facebook selling group and a car boot sale.

I’ll have to toss out the underwear and the earrings for obvious hygiene reasons though. Ew.

Stash your hard-earned cash in a high-interest current account. Compare deals with loveMONEY

One of the items in the suitcase is a coat from swish designer brand, Moncler. After some browsing in the office, we found out that it could go for a fair

Using our guide on How to make money selling on eBay, I get that coat up for auction.

It’s all straightforward enough: take some photos, put them online, sort out the specifications and details, then wait for the moolah to roll in. Well, not quite so.

Upon eBay’s recommendations (it'll suggest pricing and postage when you're creating the listing), I post the coat for £45 with an £8.95 shipping fee and an auction time of three days. I watched the watchers and expected them to pounce at the last second. Again, not quite so.

I have to relist, knocking a tenner off the coat and £1 off the shipping cost. One bid comes in on day two, but I'm secretly holding out for a last-minute scramble.

Next morning, I wake up to find that the price has climbed by a stonking £2 – result!

The suitcases seem like they’d sell quite well on Facebook. They’re the sort of thing that break a lot and somebody always needs. Searching for groups, I found a couple of local ones that list all sorts of wares and go for the one which is nearest my house.

Members and posts are both monitored by a couple of admins, so you know you're not dealing with robots.

There are around two and a half thousand members and a lot of bric-a-brac, but nobody’s biting. I post them with an asking price of £25 in the vain hope that someone’s jetting off on a romantic getaway for two, but the ad sits there unnoticed. As with eBay, I decided to change tack.

Spreading your ad's reach is dead easy on Facebook. You just select the places you want the ad to appear – it lists another load of local selling groups as well as the Facebook Marketplace – and on you go.

This was around 10pm on a Friday evening and I got a response within the hour. The next morning, I got another two, one of which is £10 (no chance!). Dare I say, this is almost quite exciting.

In the end, I go with the first buyer as she offers the most cash. And yes, I did lower the price to £22.

As everything is linked, marking an item as sold in one place automatically takes it off the other groups, making the whole process so simple. Facebook has clearly thought this through.

After agreeing on a price, I meet the buyer at a train station to make the exchange, and it goes fairly smoothly.

Technically this method of selling didn't work because I had to post the ad elsewhere, but I’d highly recommend using the Facebook Marketplace if you want to shift items quickly. Just make sure you're careful about who you sell to and agree to meet in a well-lit, public place.

Read: Selling on Facebook: 16 handy tips to get it done right

Car boot sale – everything else

I go to a car boot sale at a local primary school which has walk-in pitches and a basketball court to hang my gladrags.

It's a slow start, selling only a couple of items in the first two hours. The guy who was selling next to me had better sales gab but my customers seemed moody and unwilling to engage more than they had to.

I did some haggling, but I think I was rather ambitious with my original pricing, so I pulled out the big guns in the last hour.

The unsold garb has either gone to the recycling or the charity shop, so at least some good came out of it.

I’m not sure if it was my wares, my paltry patter or the shoppers that day, but I didn’t get far with the car boot sale.

That said, out of the three it was the most fun so I wouldn’t be averse to doing it again. I just need better trinkets – like the seller next to me who picks stuff up off the street and flogs it at whatever price comes to his head first.

What's my final take after expenses?

All in all, I wouldn’t say lost luggage is a major money-maker. It was interesting and definitely worth trying once, but it was a lot of effort for the final total.

That said, I feel I've learned a lot about how to price things and where to advertise, so it'll probably be a lot easier next time round.

I did keep a couple of pairs of the trousers, so you could argue that I saved money on buying new slacks. But that is very much the luck of the draw – most of the clothing didn’t fit me.

As a near first-time seller, I learned a lot from this challenge. If you're at all tempted to have a dabble in the world of selling, follow these tips:

At least the clothes are gone.

If you want to read about the lost luggage auction, head over to We spent £28 on lost luggage – and this is what we got.

Stash your hard-earned cash in a high-interest current account. Compare deals with loveMONEY

How to make money as an Uber driver