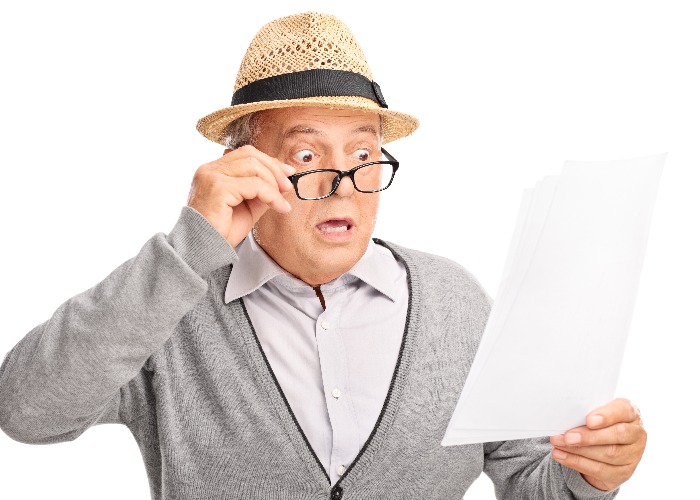 Here’s how to avoid getting stung by an incorrect emergency tax bill when making a lump sum pension withdrawal.

If you’re over the age of 55 and dipped into your pension for the first time last year, then there’s a decent chance that you were significantly overtaxed.

New figures from HM Revenue & Customs (HMRC) have confirmed that the taxman paid back more than £32m in overpaid tax to people making a withdrawal from their pension in the final three months of 2019.

Taken across the whole year, a massive £165m was handed back to savers ‒ the equivalent of around £3,000 per person.

So why are so many savers being walloped with these excessive tax rates, and having to claim the money back?

This all comes down to HMRC’s PAYE system, rather than anything that actual pensioners have done wrong, according to Jon Greer, head of retirement policy at Quilter.

The problem tends to arise when you make your first withdrawal though. If you take out a juicy lump sum from your pot for the first time, then the HMRC system may kick in, effectively expecting this to be your typical monthly income for the rest of the tax year.

In essence, HMRC views this as ‘Month 1’ of your new income setup, rather than a one-off payment.

And this is when the ‘emergency’ tax rate kicks in, meaning you end up paying a much higher bill than you really should do, leaving it down to you to then claim that overpayment back later on.

While the average overpayment comes to £3,000, plenty of pensioners end up having to claim back far more significant sums.

Hargreaves Lansdown has an excellent ‘emergency tax calculator’ which is well worth a look, as it can give you an indication of just how much emergency tax you are likely to have to pay on a withdrawal.

The trick to avoid a shock bill

This system for Income Tax has been in force for a while, but the ‘Month 1’ problem has been highlighted by the new pension freedoms.

Since April 2015 these have given those aged 55 or over the freedom to access their pension savings whenever they want, which the tax system isn’t really set up for.

But there is a way around this tax nightmare.

Chris Dando from Burfield Financial Planning says he’s advising his clients to take a small payment first and wait for the tax code to adjust before taking another one.

He told the Telegraph: “We are advising people to take a nominal payment. The first payment is taxed on an emergency basis as if it’s a regular payment. So, if we take an initial £100 or even £1 then HMRC will be aware and change the tax code accordingly.

“This ensures the correct tax code is used from the first proper payment. The only downside is that it slightly delays the process, as it may be another three or four weeks before the correct code is applied to future payments.

“So people who are desperate to get their money might be better off taking the money on an emergency basis and then claiming the rest back later.”

How to reclaim tax if you’ve already overpaid

If you’ve already been caught out by this tax trap you can wait for HMRC to move you onto the correct tax code for your provider to use for future payments or claim the tax back yourself.

There are three forms for reclaiming overpaid tax as the result of a lump sum pension payment, the P55, P50Z or the P53Z.

For more read our guide: Pension tax refund: how to reclaim money if you overpaid.

You’ll need a Government Gateway account to fill in the appropriate form online or you can choose to submit it by post.

HMRC will refund overpaid tax within 30 days providing the correct form is submitted. If you don’t make a claim you will eventually be refunded, though the timeline is less clear, so you could be waiting for some time.