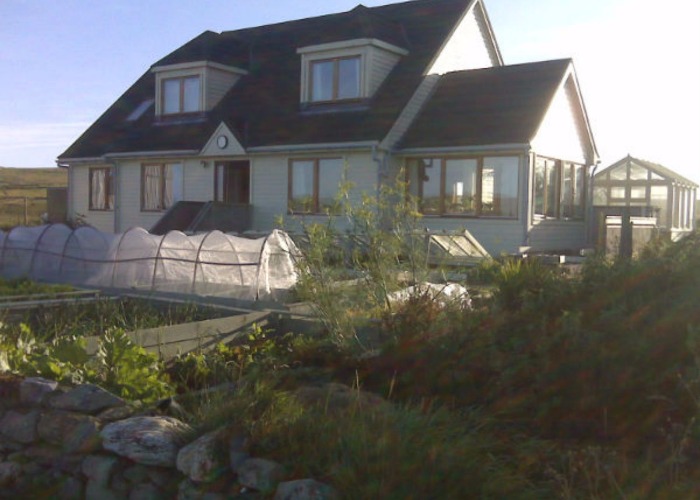 Michael and Dorothy Rea decided to build an eco house in Unst, Shetland. Here's how they did it.

For Michael Rea (72) and his wife Dot, building the Zero Carbon House was something they had always wanted to do.

It's become a prototype which the Scottish Government uses as a baseline for building sustainable houses.

“It changed the way houses were built,” says Michael.

The Rea's plumped for a timber frame build because it's low-cost, lightweight and can easily be constructed anywhere.

The fact that it's well-insulated and buildings made of timber heat up more quickly means that it's eco-friendly too.

Building work started in November 2006 and the Zero Carbon House took 14 months to complete, with Michael doing a lot of the work himself (he's the one sitting at the front with the black hat).

What features does it have?

It’s a very big house, with four bedrooms (two of which are en-suite) and a large wet room which you could "fit a football team in”.

They want to grow old in the house so it was very important that it was designed with older people in mind.

"There needs to be a fundamental change in how architects build houses to help people with conditions more common in older people," says Michael.

Dot’s mother stayed on the ground floor of the house after she had a stroke and lost all feeling in her left side.

Another consideration is Unst's ferocious weather conditions, a real test of the home's design. Michael mentions a storm that hit the island last year with wind speed reaching 207km.

One of the house's main features is an air-water heat pump that takes heat from the ambient air temperature and the heat exchanger removes the heat as the air passes through, so it's like a reverse freezer.

The air-to-water heat pump is under the house so that is protected from the weather.

There's a heat recovery system that evacuates all the air within the house over a given period and passes the exhausted air through a filter, recovering 90% of the heat.

It can be overridden and automatically switch to air conditioning in the summer.

The on-site wind turbines, as you can imagine, help generate a fair amount of power too.

Energy is stored in fuel cells placed throughout the house, some of which is used to run an electric car.

Michael looks after the house himself, maintaining two heat pumps and repairing circuit boards. He says they could treat the sewage to cre

ate yet more energy, but it would take too much time.

It’s not just energy output though. Michael and Dot also grow their own fruit and vegetables using hydroponics, which means that the crops don't need soil; they live on mineral nutrient solutions in water solvent instead.

All of the crops are protected in cold frames, the greenhouse, and protected net structures.

Fed up with your energy supplier? Search for a better – and cheaper – deal today!

How much does it cost to build?

Because of freight and the cost of local labourers, it cost more to build on Shetland than it would have in mainland UK. The VAT alone chocked up to £26,000.

To help them along, they had a look around and saw what grants and discounts were available to them.

How much does it cost to run?

Even though the house saves them money when it comes to energy, food and transport, the Rea's are still spending.

Among other things, they want to build an 18-foot-deep well to produce electricity using pressure and gravity.

Being such a large house, they use part of it as a bed and breakfast, but all of the money they make gets put back into the project.

Michael is reluctant to give an exact figure on money they save on energy as it's difficult to quantify.

It largely depends on the bed and breakfast and who’s staying in it.

He does sing the praises of what you get back from using a heat pump: "It may only need 1 kilowatt (KW) of energy, but depending on the temperature it can produce 2KW, 3KW, 4KW, 5KW.

What about mortgages and insurance?

Michael and Dot secured a £60,000 mortgage through Lloyds (then Lloyds TSB),  which was the only bank that could provide timber frame insurance at the time.

However, timber frames are becoming more popular, so even though they’re still viewed as ‘unconventional structures’, lenders may look more favourably on them in the near future.

The market's moving in the right direction if you ever want to build your own.

But before they start lending, banks and building societies will need to know that a suitable building standards indemnity scheme is in place or that the architect or consultant can meet specified criteria.

You’ll also need to get some insurance, but it’s best to go with a specialist. Make sure your insurance covers professional fees, sit clearance and debris removal should you have to make a claim.

Oh, and it’s a good idea to get 10-year structural warranty as you’d get a payout if any major structural defects appeared in the first 10 years.

An associate company of Lloyds fixed the Rea's up with self-build insurance, which includes everything including public liability cover, provided that they could build the property in a set time.

It converted to home insurance, but the premiums skyrocketed after a year, so Michael and Dot decided to shop around for a better deal.

Get a free, no obligation mortgage quote

I’m interested in building an eco house. What's your advice?

Michael says that you should think carefully about what you want to do before you get started – improvements can be done simply and inexpensively, like putting in secondary or tertiary window glazing.

He recommends grants for things like heating and insulation. Many radiators are now designed to work with heat pumps which are relatively inexpensive too.

Grants are available to lower-income households through the Energy Company Obligation (ECO), but it's worth giving the Energy Saving Advice Service on 0300 123 1234 to see what you could be eligible for.

If you're really keen on making energy efficient changes to your home, a personal loan is another funding option.

Other than that, it's a case of keeping your eyes peeled for opportunities and letting others know what you're doing as they might be able to help you out in some way.

The couple created something from nothing: “If you want it, you’ve got to make it happen,” says Michael.

Find out more about the project at www.zerocarbonhouseshetland.com. Photos come courtesy of Michael and Dorothy Rea as well as unst.org.

12 cheap and free things to do this Easter

Tennis: the cheapest way to get Wimbledon tickets