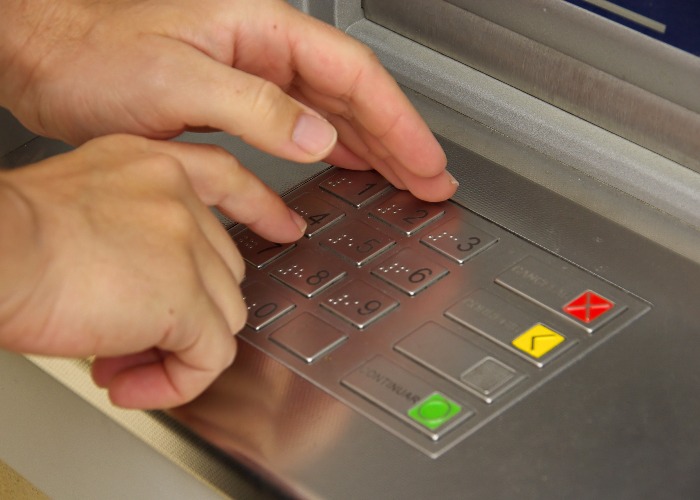 Uncertain if a cash machine has been fitted with a skimming device? Here are six tricks fraudsters use to steal your money or information at ATMs.

Every year, thousands of people become victims of ATM fraud, as cash machines that scammers have tampered with are not always easy to spot.

City of London Police are now warning of an old trick making the rounds again.

Read on to learn the tricks fraudster employ when tampering with a cash machine and stay one step ahead of the criminals.

Police have warned that criminals can try to steal cash at ATMs using a simple screw.

The screw jams the cash slot closed and no money comes out for the customer. The criminal approaches the machine after the customer leaves and simply removes the screw to find the trapped cash hidden in the slot.

Older cash machines are the most vulnerable to this trick, so watch out.

In some cases criminals place card or cash capture devices and PIN compromise devices in or around ATMs to get quick access to your cash. A few sneaky scammers will even put on entire false fronts to capture unsuspecting people’s PINs and money, Fico told This is Money.

They’re often really well disguised so have a thorough check of the ATM before you start using it.

A wider card slot than normal

You’re right to be concerned about an unusually bulky card slot, as this could contain a ‘skimmer’. This tool is attached to the ATM’s card slot that secretly takes your card details when you’re making a withdrawal. Apart from its width, it’s really difficult to distinguish it from a normal card slot.

Keep an eye out for misaligned or misprinted stickers - it’s often an attempt to cover up where a compromise device has been installed.

[Read more: Four sneaky phone scams you should be aware of to stay safe]

A loose or blocked card slot

This may be a sign of a ‘Lebanese Loop’. Criminals will try and trap your card in the machine by placing a tiny plastic device or sleeve with a barb into the card reader so that when you try and withdraw money, your card will get stuck.

The ATM will keep asking for a PIN as it can’t read the card, leading you to believe that your card has been swallowed and walk away. That gives the fraudsters the perfect opportunity to swoop in and take your card.

Be wary if the PIN pad feels loose, thick or sponge-like. This crafty trick is known as ‘pin-pad overlay’- the real PIN pad is covered by a fake which does record your PIN correctly just like any other machine, but also captures your details for the fraudster.

In some cases numbers are instantly transferred by WiFi to a waiting accomplice so that they can record it and use it later.

This warning is nothing new but is still vitally important: be aware of what’s going on around you. Don’t accept help from strangers and don’t allow yourself to get distracted.

Scammers often work in teams and they rely on distraction to catch their victims out. It's a good idea not to use cash machines near a group of people who are inexplicably loitering. If something goes wrong they may become oddly helpful and when one is trying to assist you, the others may look at your PIN or swipe your card or cash.

What to do if you suspect a dodgy machine

If you suspect that something isn’t quite right, report it to the police immediately. Then go and use another cash machine.

Though it may be tempting, you shouldn’t take any of the devices away as the gangs could come after you to get them back.

More on scmas and how to stay safe