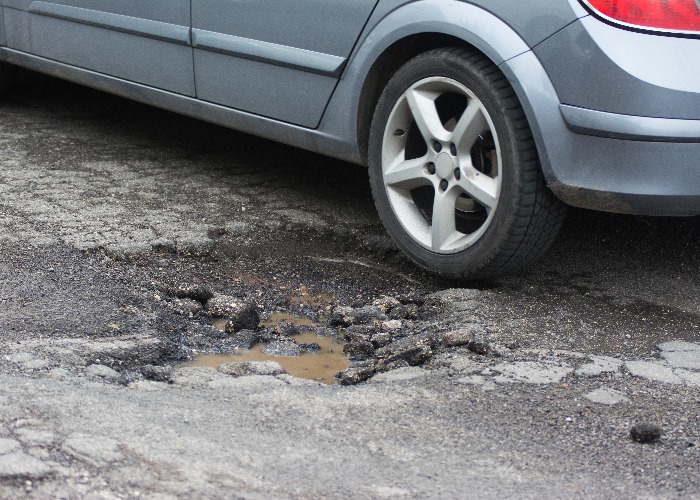 The number of cars damaged by potholes looks set to rocket. If you're affected, here’s how to claim the compensation you're owed from your local council.

There are few subjects as guaranteed to provoke the ire of the nation’s motorists as potholes.

Indeed, the state of the roads in the UK is a regular conversation topic among those of us who spend any amount of time behind the wheel.

However, there are now warnings that issues with potholes ‒ and the damage they wreak on our vehicles ‒ is only going to get worse in the months ahead.

According to the RAC, the last quarter was the worst for pothole-related breakdowns in 15 years.

Between June and September, the breakdown service attended 1,810 breakdown callouts which were due to broken suspension springs, distorted wheels and damaged shock absorbers, all classic signs of a car having come off worse after encountering a pothole.

That represents 1.2% of all of its call-outs over that three month period, making it the worst third quarter for pothole incidents since 2006.

This is even more worrying when you consider that June to September are normally the quietest quarters for pothole problems.

What’s more, the RAC said that according to its Pothole Index, drivers today are almost one and a half times more likely to break down after hitting a pothole than they were back when the RAC launched its index in 2006.

Why are the roads so bad?

The Department for Transport allocates capital funding to the nation’s various councils, which they can then use for maintenance of our roads.

And the sum being handed over for 2021/22 is vastly down from the year before.

For this year, the Department is giving councils £1.39 billion. That sounds like a vast figure, but it’s actually a cut of £400 million ‒ or around 22% ‒ on the previous year.

And that extraordinary cut in funds is inevitably going to have an impact on council efforts to deal with our potholes.

According to new analysis from the Local Government Association (LGA), the money lost by councils could cover the repair of an incredible 9.5 million potholes. That’s the equivalent of around 64,000 repairs in each and every local council area.

This would be bad enough if our roads were currently in excellent condition, but the reality is rather different. The LGA argues that there is already a backlog of road repairs which would cost an eye-watering £10bn, and more than a decade, in order to clear.

In other words, an already significant problem is guaranteed to get worse because of a lack of adequate funding. Realistically, any talk of ‘levelling up’ is hogwash if we have a nation of roads that aren’t fit for purpose.

Does technology have the answer?

There is some hope for the pothole situation though, in the form of technology.

The Government has backed a scheme which will test flying drones over roads in order to identify potholes which need repair, as well as use 3D printing in order to fix those cracks.

Obviously, we need to see if such innovative systems actually work before even thinking about rolling them out across the country, but it is at least encouraging to see some creative thinking taking place.

Ultimately though, putting the pothole situation right will take money. Until the Government gets serious about funding those road repairs, then day after day drivers will continue to see their vehicles damaged through no fault of their own.

Get AA breakdown cover from just £6 a month

In general, a hole in the road counts as a pothole if it’s more than 40mm deep. However, you should also report other dangerous road defects or smaller holes.

Local authorities have an obligation to pay out for damage caused by defects they should have maintained. However, they do have a get-out clause: if a pothole hasn’t been reported, the authority doesn’t have to pay up.

Most authorities with responsibility for maintaining roads now have easy to use pothole reporting systems on their websites.

In general, in England, Wales and Scotland the local council will be responsible for B roads and small A roads, In England, National Highways is in charge of bigger A roads and motorways, and Transport for London looks after 'red routes' in the capital.

In Wales motorways and trunk roads are cared for by Traffic Wales and over in Northern Ireland, TransportNI cares for all the roads.

In Scotland, the responsibility differs depending what areas you are in. In the North West and North East, it falls to Bear Scotland, in the South West it’s the Scotland Transerv and in the South East it’s Amey’s job.

So, if you spot a pothole, or swerve to avoid one, check which authority is responsible and report it.

The more drivers who report potholes, the better. If you hit one that someone else has reported, you’ll be thankful they did. In turn, you’ll be helping other drivers by reporting other potholes you encounter.

How to claim for pothole damage

Councils must have a system in place to enable them to receive defect reports from the public.

They may be liable if they have not acted after receiving a defect report or finding the defect during a routine road inspection.

Each council will have a specific procedure for compensation claims, so make sure you check your local council’s website for specific information.

Remember, you can claim for damage to bikes and motorcycles as well as cars.

As a general rule of thumb, if you aim to follow the steps below you won’t go far wrong:

Get your car insurance sorted over at Confused.com

Am I likely to get compensated?

It won’t be easy!

The council will vigorously defend itself under section 58 of the Highways Act (which basically states they just have to prove they have taken ‘reasonable’ care of the road).

But that doesn’t mean you shouldn’t try. While evidence suggests that the vast majority of claims are automatically turned down in the first instance, persistence is key.

If your claim is rejected and you think it’s unfair, you can ask to see details of the council's road inspection reports, and try to claim again. If you still don’t win, you can take your case to the small claims court.

If the damage is very expensive, contact your insurance company or seek legal advice.

Authorities currently pay out more than £30 million in compensation for potholes so it's worth your time.

Get your car insurance sorted over at Confused.com