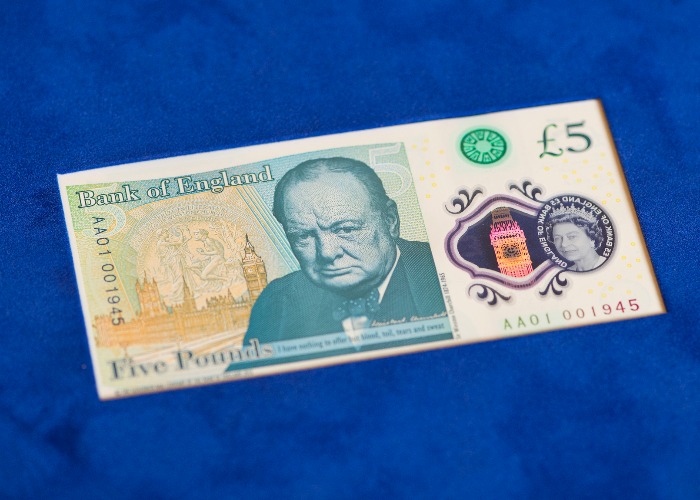 Reports of fake £5 notes featuring Sir Winston Churchill have surfaced. We take a look at the key security features that will help you tell if you’ve been handed a counterfeit.

A PCSO has warned that fake new £5 banknotes are circulating in Dorset.

Sarah Dutton said: "Please be aware of counterfeit new five pound notes circulating in the area. Report any suspicious activity via 101 or 999 if it is an emergency."

The Bank of England responded that it had not yet seen any polymer forgeries of the Winston Churchill fiver in circulation, but added that it had been informed of versions being printed on paper.

If you’re concerned that you may have received a fake new fiver, here’s our 11-step guide to spotting a counterfeit.

The new £5 note is printed on a special thin polymer, which is a light, flexible plastic. It has a very different feel to the old paper notes.

The new polymer £5 note should have the portrait of the Queen on the front...

...and Sir Winston Churchill on the back.

The polymer fiver is slightly smaller than the paper £5 note. It measures 125mm x 65 mm compared to 135mm x 70 mm for the old paper note.

A genuine polymer £5 note should have a large see-through window with a clear portrait of the Queen printed on it and the words ‘£5 Bank of England’ printed twice around the edge.

Can you see a metallic image of Big Ben?

There should also be a metallic image of the Elizabeth Tower (aka Big Ben) on the see-through window.

The foil should be gold on the front and silver on the back of the note. When the note is tilted a multi-coloured rainbow should be visible.

Check the border and £ symbol

The edge of the see-through window should feature a border which changes from purple to green when the note is tilted at an angle.

The £ symbol in the window also changes colour from purple to green and the effects can be seen from both the front and back of the note.

Look for the three foil patches

There should be three foil patches on a genuine polymer fiver.

On the front of the note below the see-through window there should be a silver foil patch with the word ‘Five’. When tilted the patch should change to read ‘Pounds’.

There’s another silver foil patch above the see-through window containing the image of the coronation crown which appears in 3D. When titled the image produces a multi-coloured rainbow effect.

A real £5 note should also have a circular green foil patch on the back which contains the words ‘BLENHEIM’. This should be located directly behind the crown on the front.

You should be able to feel raised print on a genuine polymer fiver.

These are located on words like ‘Bank of England’ and on the number ‘5’ in the bottom right hand corner.

The Bank of England says the printed lines and colours on a genuine fiver should be sharp, clear and free of smudges and blurred edges.

Beneath the Queen’s portrait there should a cluster of microlettering stating the value of the note in small letters and numbers. You might need a magnifying glass to get a proper look.

Check for the ultra-violet five

A real polymer £5 will also have a number ‘5’ that you can only see under ultra-violet light.

The number should appear in bright red and green, while the background should remain dull in contrast.

What to do if you find a fake fiver

If you’re still unsure about whether a note is fake the Bank of England has a free app you can use on Android and iOS devices.

Should you discover you have a fake banknote you should take it to the police. They will send the note to the Bank of England to be checked.

If it is found to be counterfeit, you won’t be reimbursed but if it is genuine you will receive the money back.