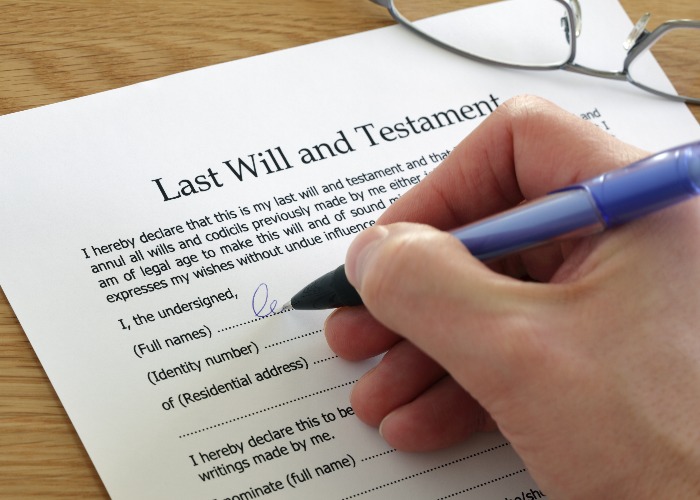 We reveal how you can get a cheap or even free will this month and explore how new legislation allowing wills to be witnessed remotely works.

Most of us don't have a will

More than half (55%) of us haven't written up a will, including nearly a third of people aged over 55.

That's according to wealth manager Brewin Dolphin, which adds that two-thirds of unmarried couples don't have a will.

That's of particular concern because unmarried people don't automatically inherit from their partner unless they owned property together.

While we're on the topic of planning for after you're gone, it's worth checking where you have the right life cover in place.

You can read our guide to getting the right policy for less here, or you can jump right in and get a quote from Active Quote here.

Every March (and October) there is a Free Wills Month promotion, in which anyone aged 55 or over can have a basic will drawn up by a solicitor for free in return for charitable donations.

Similarly, depending on your age the Stroke Association (over 60s) and Cancer Research, have teamed up with solicitors all over the country to help you write or update your will for absolutely nothing (IDDT members of any age are also eligible).

Of course, although the organisations mentioned above would never ask, you should either give a donation at the time, or ensure you name the charity as a beneficiary in your will.

It's a great initiative and should be rewarded whenever possible.

Alternatively, every November, Will Aid works with solicitors in the UK who donate their time and support for charity, which means you don’t have to pay to have a will drawn up.

That said, because this is again for charity, it’s suggested that you pay £100 for a single will or £180 for a pair of mirror wills (where a husband and wife or partner make almost identical wills).

Putting your affairs in order: wills, power of attorney and paperwork explained

Who should write it?

To ensure your will is accurate and legal, it’s generally advisable to get a solicitor to draw it up for you.

A solicitor can give you legal advice on more complicated matters such as Inheritance Tax, and can ensure there are no errors in the will.

Solicitors’ fees can vary but typically you’re looking to pay between £150 to £200.

If you think solicitors’ fees are too high, you could consider a will writer instead. But it is important to remember that unlike solicitors, they don’t have to be qualified or regulated.

So if you are going to use a will writer you need to ensure he/she is a member of a recognised trade body such as the Institute of Professional Willwriters or The Society of Will Writers.

This means they must follow a Code of Practice, which covers the training and assessment of will writers.

What’s more, there’s a complaints procedure which can help you to sort out problems if anything goes wrong.

Or if your financial affairs are straightforward, you could simply write your will yourself using a DIY kit from your local stationers. Super-cheap DIY wills can cost as little as £10. For this ultra-low price, you'll generally be able to select from a range of pre-formatted templates.

You simply choose the version that most closely matches your needs. Once you have completed the form, your will is emailed to you ready to be printed off so it can be signed and witnessed.

If you spend a little extra, say £30 or so, you'll get everything that a cheap will offers alongside a few additional benefits. For example, you'll probably have access to templates that can be more easily customised.

You may also get the opportunity to rewrite your will as often as you need to and free online storage may also be on offer.

The downside to doing it yourself is that these forms can be tricky to fill out and it’s easy to make mistakes – invalidating your will.

So unless you’re confident and your will is extremely straightforward, DIY wills are probably best avoided. If you do want to go ahead, seek advice from an organisation such as Citizens Advice.

What to include in a will

It’s worth thinking about exactly what you want included in your will. Work out how much money, property and other possessions you have – don’t forget to include savings, pensions, insurance policies and shares.

Consider who you want to benefit from your will and make a list of all the people (your beneficiaries) to whom you want to leave your money or possessions. When doing this, be as specific as possible and don’t use nicknames.

Also consider whether you want to leave any money to charity, and if you have kids under 18 (16 in Scotland), think about who is going to look after them should you die.

Getting your will witnessed

One of the most important aspects of writing a will is having it witnessed. A will is only valid if it is signed by both the testator and two witnesses.

This is simple enough during ordinary times, but we aren’t living through those at the moment, which is why temporary changes to the laws surrounding witnesses have been introduced.

Rather than requiring the will to be witnessed and signed in person, the new legislation allows wills to be witnessed remotely over video conferencing, such as Zoom or FaceTime.

The legislation changed in September, and importantly has been backdated to 31 January 2020, so wills written in the intervening months are still covered.

The change to the laws covering witnesses will remain in place until 31 January 2022, or as long as deemed necessary, according to the UK Government. After that point, wills will once again have to be made with witnesses who are physically present.

The Ministry of Justice has emphasised though that the use of video technology when witnessing wills needs to remain as a last resort, with people still arranging a physical witnessing where safe to do so.

It highlighted the fact that wills witnessed through windows are already considered legitimate, so long as they have a clear sight of the person signing it.

The Government has also published guidance on how to go about signing and witnessing a will via video link on its Gov.uk website.

Steps include recording the making of the will, ensuring that the witnesses are present remotely at the same time, and having the will document delivered to the witnesses within 24 hours for them to sign.

Importantly the Government has decided against allowing electronic signatures as part of this temporary legislation, due to concerns over “undue influence or fraud against the person making the will.”

In your will, you should name the people you want to handle your affairs after your death. These are known as the executors. You can choose family or friends, but make sure they are happy to take on the responsibility before you include them in the will.

You can nominate your solicitor, although you are under no obligation to do so. Be aware that a solicitor will charge for being an executor.

Two executors are normally nominated, although you can choose up to four.

If you've been nominated and don't have a clue where to start, read our guide on how to be an executor.

You can keep your will at home, but make sure people know where it is.

Or you can store it with your solicitor, your bank, at a storage facility or with the Principal Registry of the Family Division.

Changing a will later

For a will to be valid, it must be:

It’s also important to review your will regularly and make amendments where necessary.

If your circumstances change significantly – for example, you get married, divorced or separated, have children, or buy a house – it’s vital that you update your will.

An existing will automatically become invalid if you marry.

An amendment, known as a codicil, has to be witnessed in the same way as the original will. You could also write a new will, but make sure you declare it declares that all previous wills and codicils are null and void.

You can find further tips on will writing and other important information about dying and bereavement on the Dying Matters website.

Finally, bear in mind that Scottish law on inheritance differs from English law. You can check out the Citizens Advice Bureau in Scotland for further information.

Make sure your will is cheap for the right reasons

There have been reports of banks offering cheap wills that could end up costing you tens of thousands because of details hidden in the fine print.

This is Money has highlighted a number of cases where families signed up to wills that seemed a great price at the time, only to learn they were on the hook for huge fees.

In one example, a NatWest customer who took out a will with the bank 10 years ago recently discovered in the small print that NatWest had reserved the right to act as executor of the will rather than a loved one.

It highlights the importance of going through your will with a fine-tooth comb to ensure no one other than your loved ones get a significant cut of your estate.

Speaking of which, you should also have a look at how to minimise your Inheritance Tax bill and ensure all other areas of your finances are in order so you have nothing to worry about.