Celebrities who aren't afraid to splash the cash 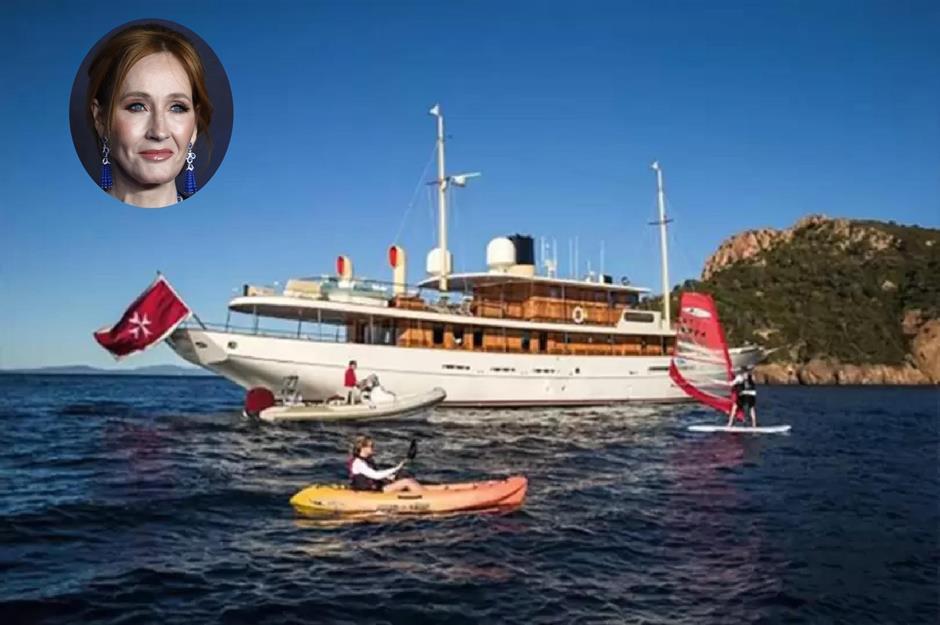 Many celebrities are no stranger to overspending, but some of their purchases are definitely more lavish than others. From unforgettable engagements to bizarre buys they probably wish they could forget, read on to discover some of the A-list's most extravagant spends. All dollar values in US dollars. 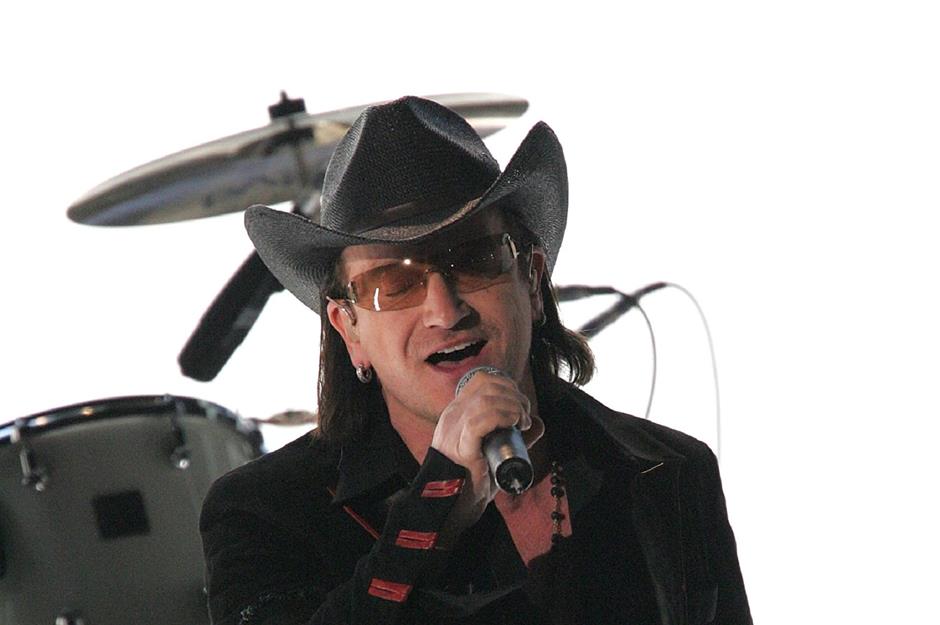 A $1,500 (£1.1k) plane ticket is a drop in the ocean for U2 frontman Bono, who has an estimated fortune of $700 million (£523m). But it’s still a hefty sum to have spent on a rescue mission for his much-loved hat. While he was in Italy for a charity concert in 2003, Bono realised that he’d left his favourite trilby hat in London. Rather than continue his trip without it, the singer-songwriter bought his hat a first-class ticket to Modena. The trilby apparently travelled in the cockpit of a British Airways plane to avoid getting squashed on its voyage, with the price of the journey including the cost of the ticket, insurance, taxi rides from the airport, and tips. 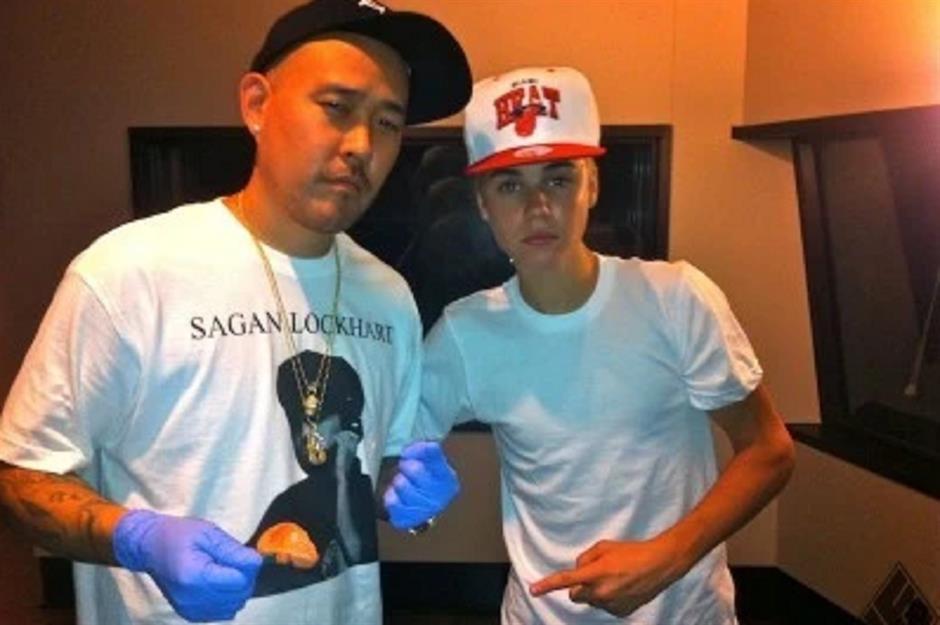 Courtesy If and Co.

In 2011, a then-17-year-old Justin Bieber spent $5,000 (£3.7k) on a custom gold grill for his teeth. While some celebrities will pay hundreds of thousands of dollars to bedazzle their bite, the Sorry singer wasn’t investing in a permanent accessory. Rather, the diamond-encrusted grill, which covered just six teeth, was part of Bieber’s Halloween costume. The grill was created by Ben Baller (pictured), co-founder of LA-based jewellery company IF & Co. Baller received such a backlash from ‘Beliebers’ – Justin's fans – concerned about the singer spoiling his smile that he issued a statement, explaining: “I do NOT make permanent grills, I only do the ones that are removable... Relax, your little heart throb is not ruining anything.” 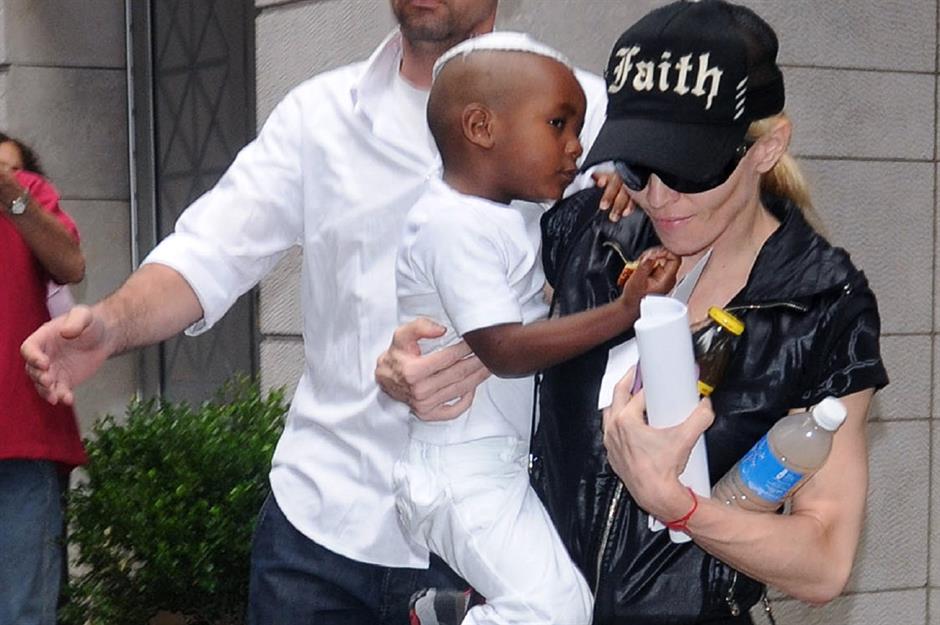 In 2004, the media reported that Madonna would only drink holy water. Blessed and sold by the controversial Kabbalah Centre in Los Angeles, Madonna's water cost around $5 (£3.75) per bottle – and she wasn't content with just drinking it. Subsequent reports claimed that the singer also arranged for the Kabbalah water to fill the radiators in her home. This allegedly cost her a hefty $10,000 (£7.45k) every month. 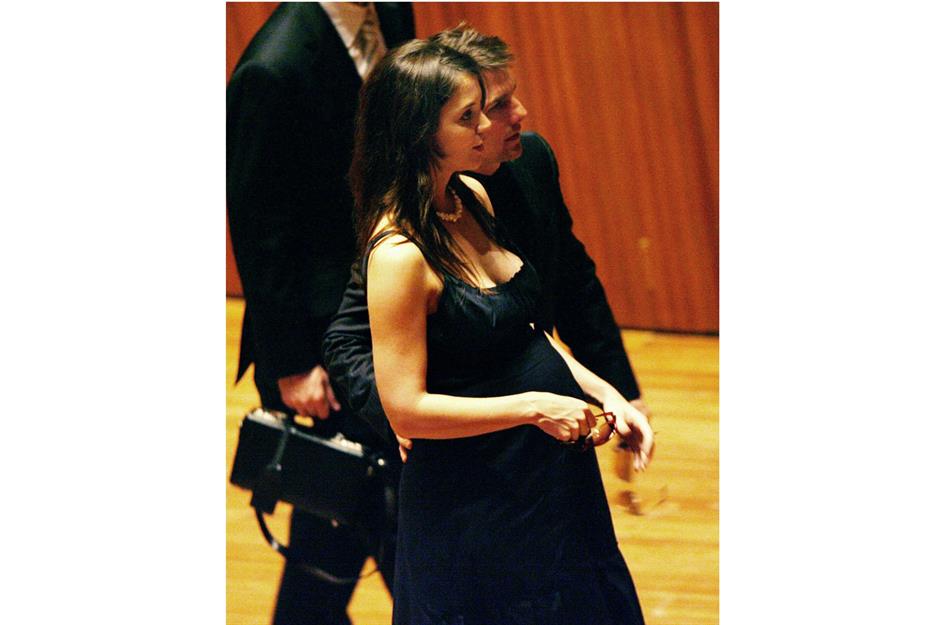 When Katie Holmes was pregnant with their daughter Suri, her then-partner Tom Cruise made the bizarre decision to buy a sonogram machine. Cruise revealed the purchase on ABC’s Barbara Walters Presents: The 10 Most Fascinating People of 2005. As well as helping the show live up to its name, the Mission: Impossible actor sparked a debate on the ethics of at-home testing.  Although Cruise said the couple would donate the machine to a hospital after their baby was born, many people were quick to point out that medical staff must train for months before they can carry out ultrasounds safely. Cruise didn’t specify which machine he’d bought but, according to NBC News, the cost of sonogram equipment can range from $15,000 (£11.2k) to $200,000 (£149.5k). 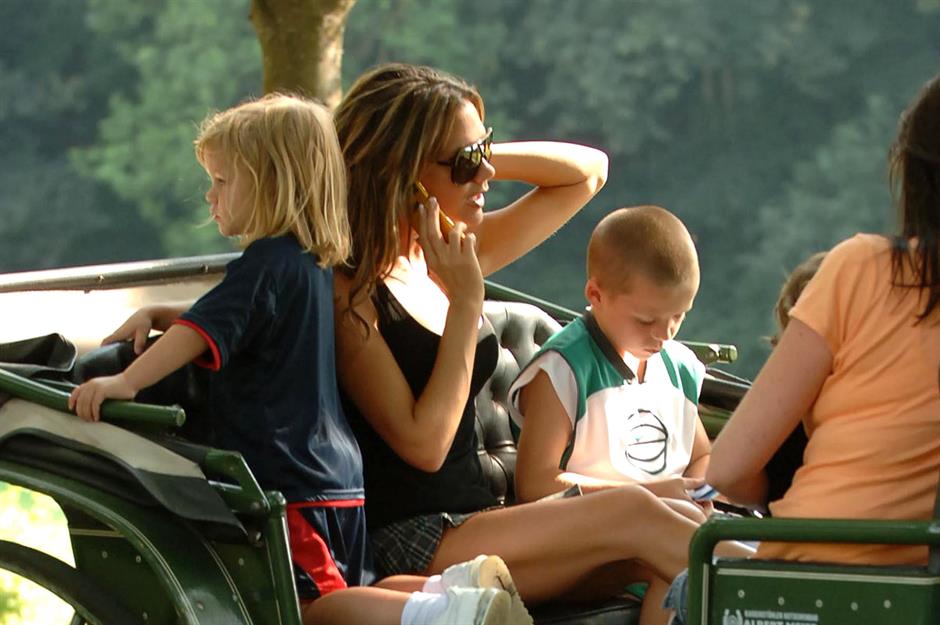 Victoria Beckham isn’t called Posh Spice for nothing. In 2011, it was revealed that the former Spice Girl had splashed out $29,800 (£22k) on a 24-carat gold iPhone 4. Complete with a topless photo of Victoria’s husband, footballer David, as the screensaver, the customised mobile phone was made by luxury gold gift company Goldgenie. 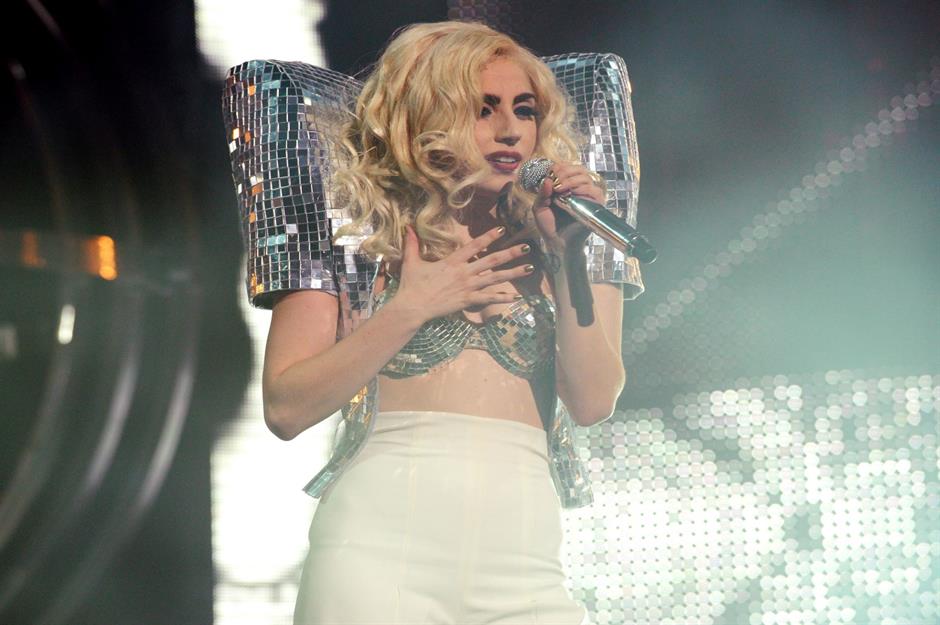 Despite “intimidating” Barack Obama at a Human Rights Campaign fundraiser, Lady Gaga isn’t quite so bold when it comes to the spirit world. In 2010, the singer-songwriter hit headlines after she spent $50,000 (£37.4k) on an electro-magnetic field reader – a handheld device that’s designed to detect paranormal activity. Gaga apparently hoped the gadget would ward off ghosts during her The Monster Ball Tour in 2010 (pictured), with a source explaining at the time: "[Lady Gaga] believes in paranormal activity and won't take any risks when she is on the road. It's important to her to be safe from spirits." 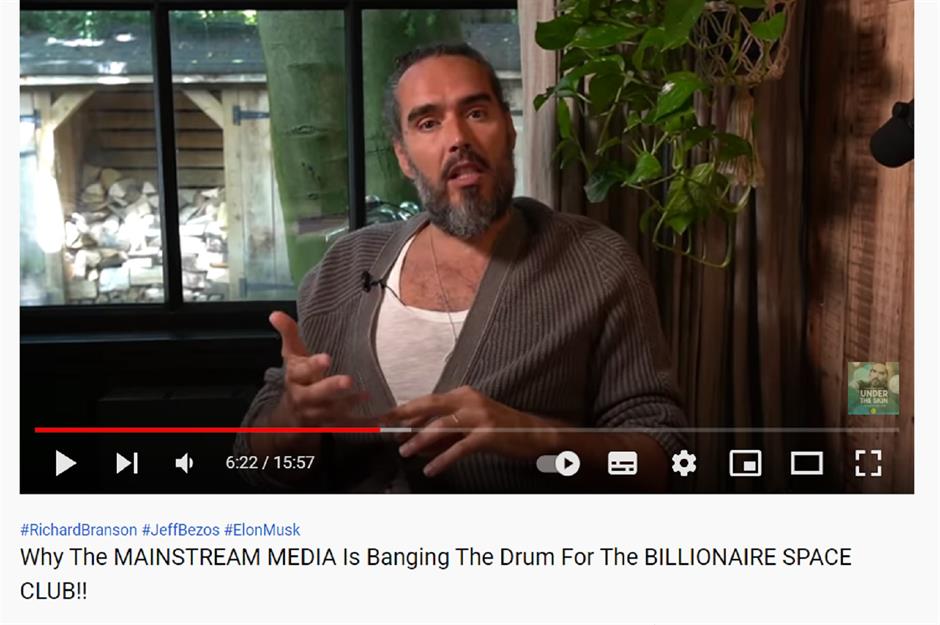 British comedian and actor Russell Brand has been a vocal critic of the billionaire space race, declaring in a recent YouTube video: “Branson’s going to space, Musk’s going to space, Bezos is going to space. I tell you who ain’t going to space – you ain’t going to space, but you are paying for other people to go... in a variety of ways.” But although he asks, “what does the return of the space cowboy mean for ordinary people like you and me?”, Brand hasn't always been quite so "ordinary". In fact, back in 2010 his then-fiancée, singer Katy Perry, bought him a $200,000 (£149.5k) ticket for Richard Branson’s Virgin Galactic spacecraft. We wonder if he got a refund? 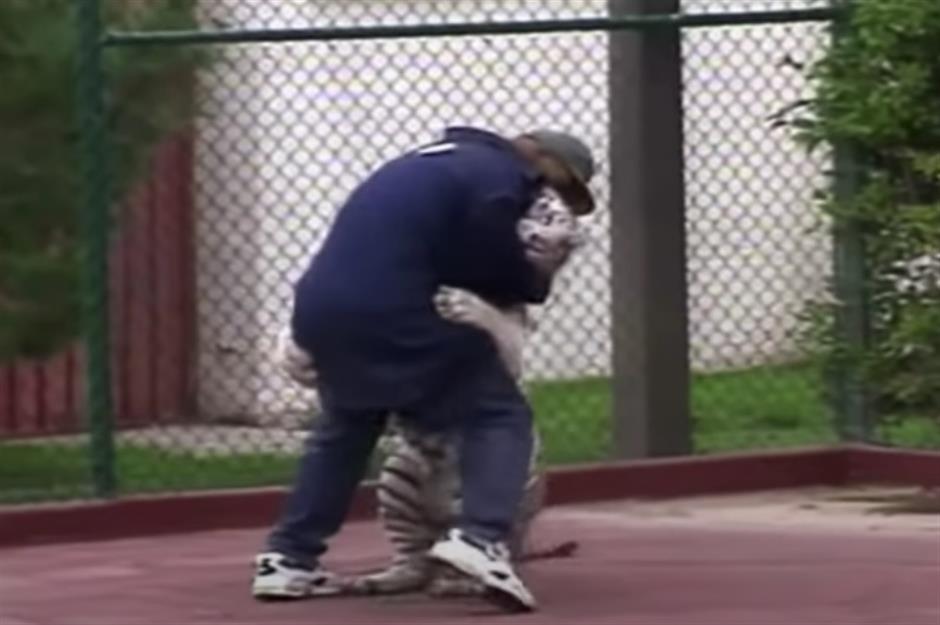 Former boxer Mike Tyson is known for his lavish lifestyle, and subsequent slide into bankruptcy. Among his most extravagant purchases was a 24-carat gold bathtub that cost a whopping $2.2 million (£1.6m), as well as a trio of white Bengal tigers. According to The Things, the tigers cost $70,000 (£52k) each. That was just the tip of the iceberg: Tyson also paid out $125,000 (£93.4k) a year to have his tigers professionally trained, plus $200,000 (£149.5k) a year to keep them fed. He reportedly gave up his tigers after his favourite, Kenya, bit off a woman’s arm. 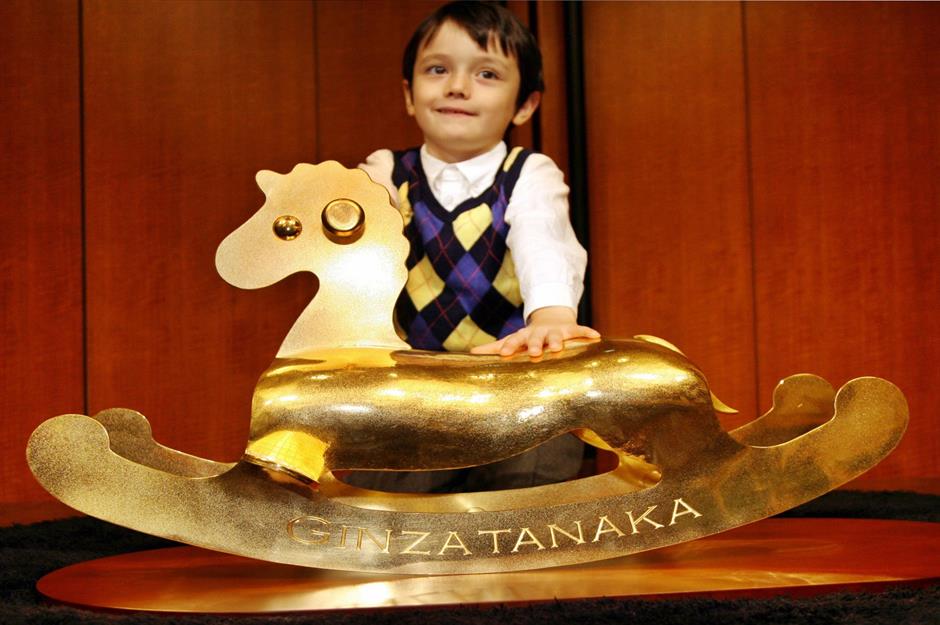 That wasn’t the first time Blue Ivy had celebrated in style, with the pampered tot receiving gifts worth an estimated $1.5 million (£1.12m) to mark her birth in 2012. This included a $600,000 (£449k) gold rocking horse crafted by designer Ginza Tanaka, who first created the 24-carat solid gold toy as a 6th birthday present for Prince Hisahito of Japan back in 2006. 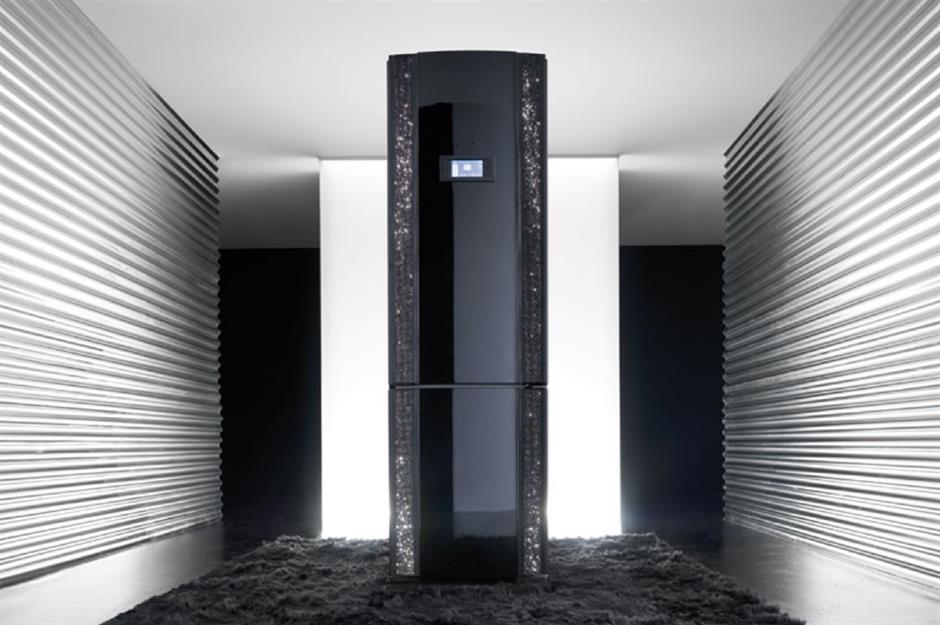 Kim Kardashian and ex-husband Ye (formerly Kanye West) are famed for their extravagant lifestyles, so it’s no surprise that they feature multiple times in this round-up. The pair attracted ridicule in 2013 when it was reported that the ‘flush’ couple had spent $750,000 (£561k) on gold-plated toilets for their home. And it didn't end there: their Bel Air mansion apparently also contained a Swarovski-studded refrigerator, estimated to have cost a sparkling $1 million (£748k). 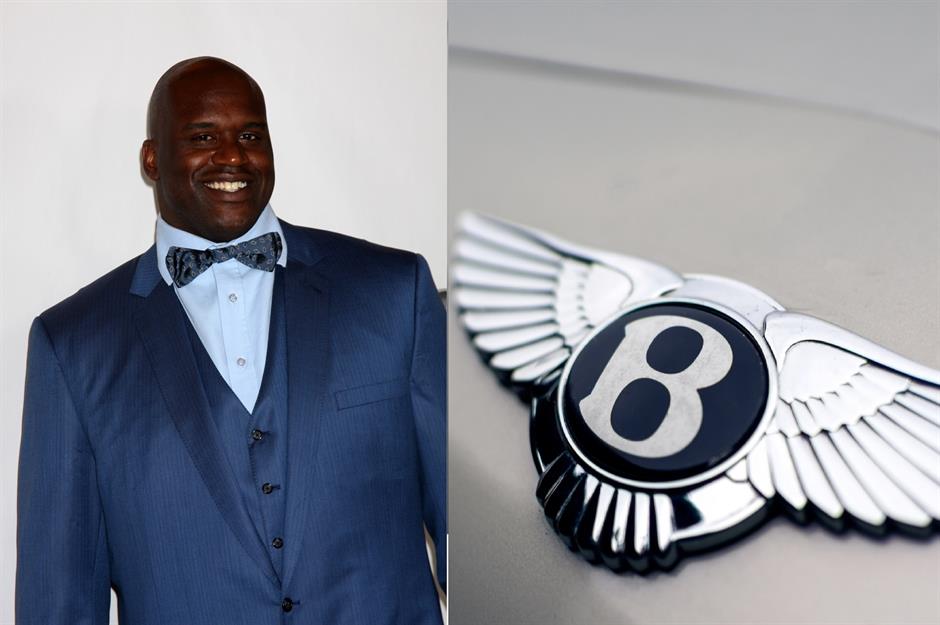 Many of us have made an impulse purchase we regret, but unlike former NBA champion Shaquille O’Neal we probably weren’t left with a million-dollar bill. Shortly after signing his NBA contract, O’Neal went to a Rolls Royce dealership in Beverly Hills, where he spotted Mike Tyson buying a couple of Bentleys. Describing the incident to Vanity Fair, O’Neal said: "I had on some shorts and a tank top and flip-flops, and I said to the salesman, ‘Sir, how much does this one cost?’ He said, ‘Can you afford it, sonny boy?’ I was so upset that I bought three Bentleys right there on the spot… A million dollars gone in 10 minutes.” The worst part? At over seven feet tall, O’Neal was too tall to even fit in the driving seat. 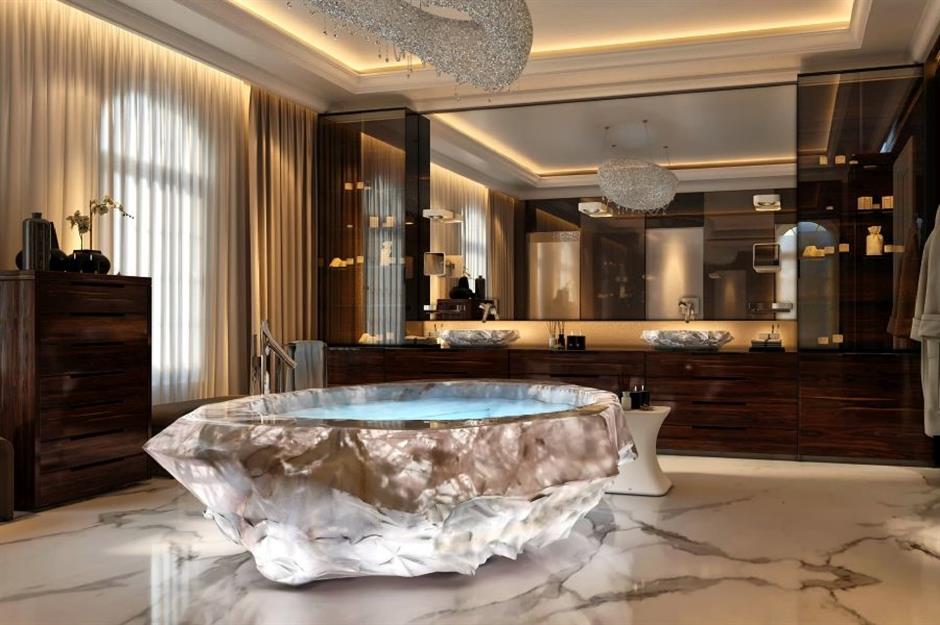 It’s not just Kim Kardashian who likes some bling. As if Swarovski crystals weren’t quite luxurious enough, model and socialite Tamara Ecclestone splashed out on a solid crystal bathtub back in 2011. The model and TV personality apparently sent a quintet of workers "up the Amazon” to source the crystal, which was so heavy that she had to reinforce her bathroom floor. "I spend a lot of time in the bath, so it's worth it," she told the Daily Mail at the time. Created by luxury Italian design company Baldi Home Jewels, the bathtub was customised with gold taps and diamonds, and the project in total set Ecclestone back around $1.34 million (£1m). Pictured is a Baldi bathtub in one of the XXII Carat Villas in Dubai. 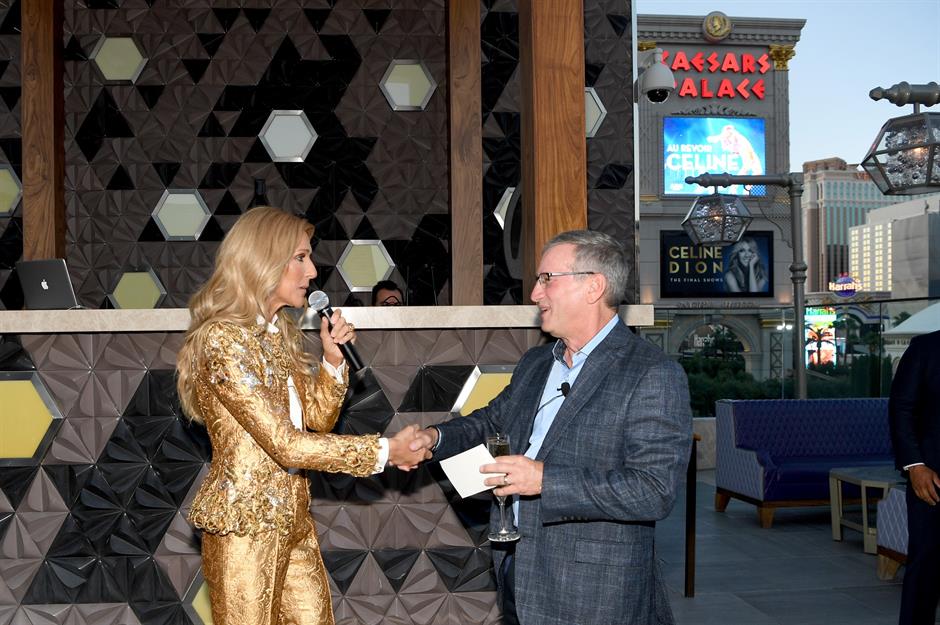 As the best-selling Canadian recording artist of all time, Celine Dion has certainly earned her $460 million (£344m) fortune – and the right to spend it as she likes. Despite this, the media had a field day when it was revealed that Dion had reportedly bought a $2 million (£1.5m) humidifier for her three-year residency at Caesars Palace in Las Vegas. The humidifier hung above the stage where she performed to "preserve her singing voice in the harsh desert climate.” When you consider that Mariah Carey insured her voice for a whopping $35 million (£26.2m), Dion’s investment seems almost modest... 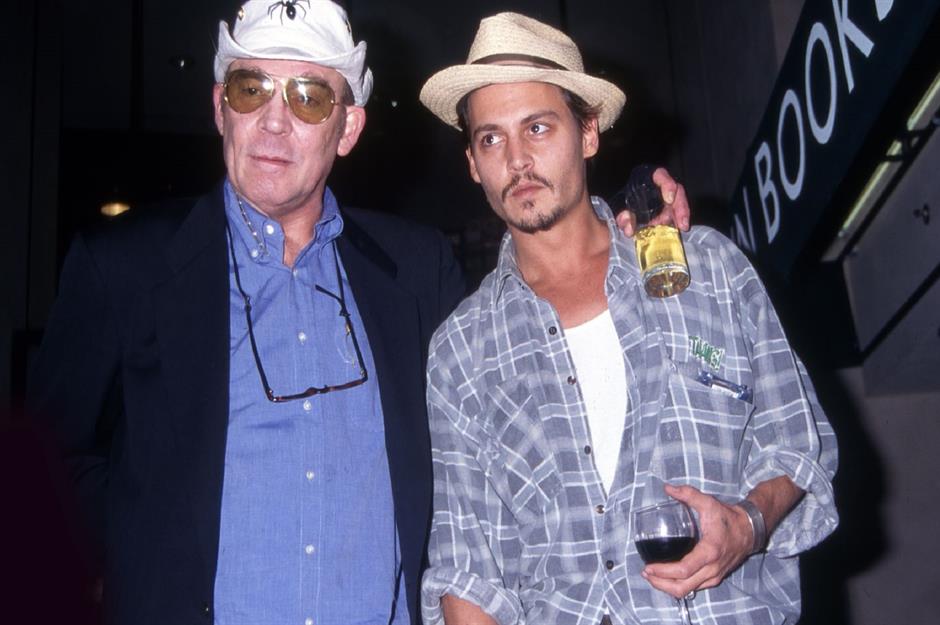 In 2017, Johnny Depp filed for bankruptcy after finding himself $40 million (£30m) in debt. His extravagant spending soon became the subject of a lawsuit, as Depp’s managers fought to prove that the actor was to blame for his own financial ruin. According to the suit, Depp’s monthly expenditure included $30,000 (£22.4k) on wine alone – but it didn't end there. It was also uncovered that he had spent $3 million (£2.24m) to blast the ashes of writer Hunter S. Thompson into space from a cannon. Depp and Thompson are pictured here at a 1998 book signing. 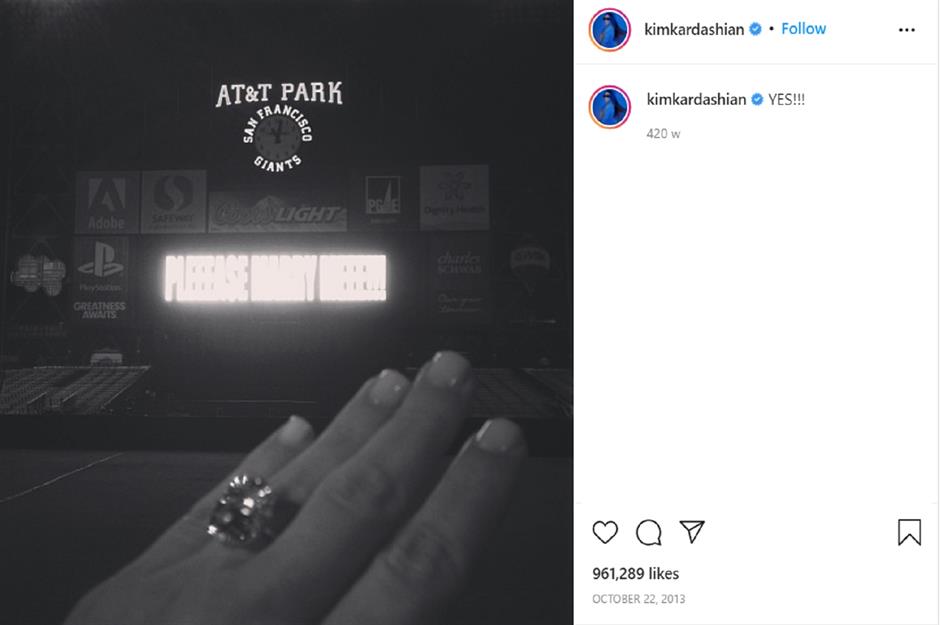 As of February 2021, 'Kimye' is sadly no more – but the billion-dollar couple's engagement in 2013 still remains one of the most spectacular celebrity proposals of all time. For the occasion, Ye was gifted the use of the San Francisco Giants' stadium by its owner, saving him the estimated $220,000 (£164.6k) it would have cost to hire the venue and scoreboard. However, he certainly splashed the cash elsewhere. According to research by E! News, the 50-piece orchestra that Ye hired would have cost around $30,000 (£22.4k), while the engagement ring itself – a glittering 15-carat cushion cut diamond – cost a rumoured $8 million (£5.9m). 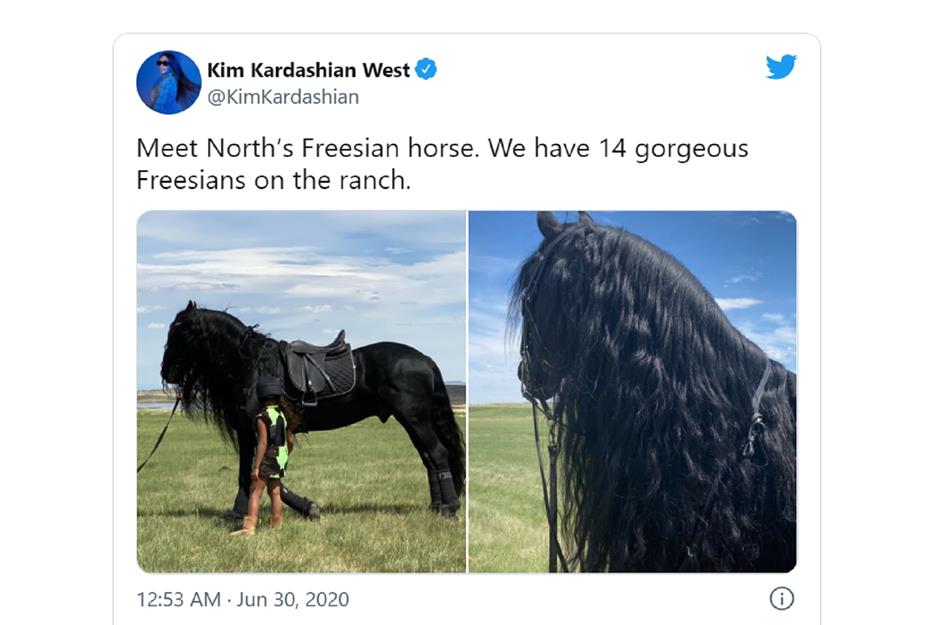 It's not all about engagement rings and gold toilets in the Kardashian family, in case you were wondering. When Ye bought a ranch in Wyoming back in 2019, Kim Kardashian made another extravagant purchase: 14 Friesian horses. One of these rare and expensive animals alone can cost between $7,000 and $600,000 (£5.2k to £449k), according to US Friesian Referral. For a herd of 14, Kim could have parted with up to $8.4 million (£6.3m). Her tweet announcing the arrival of the creatures, pictured, was posted in the midst of the COVID-19 pandemic. Followers were quick to point out that the price of just one of Kim's horses could have fed a family of four for a year. 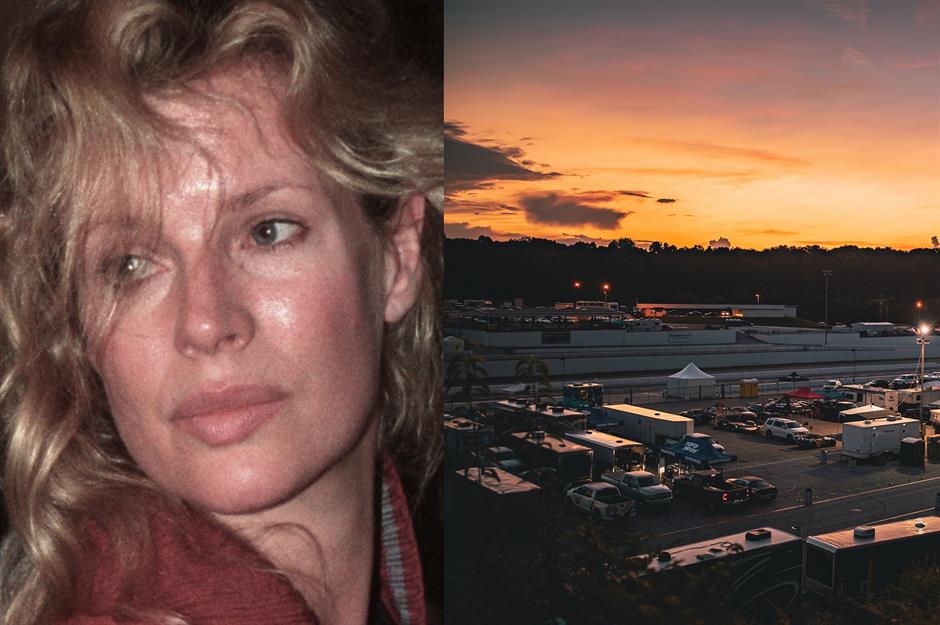 In 1988, L.A. Confidential star Kim Basinger blew a whopping $20 million (£14.9m) to buy the bulk of the private land in the town of Braselton, Georgia. Encouraged by her family, Basinger intended to turn the town into a dollar-making tourist attraction. Her investment would be worth more than $46 million (£34.4m) in today's money, but unfortunately it didn't pay off. In 1993, Basinger filed for bankruptcy and was forced to sell the land for just $1 million (£748k) in 1994. 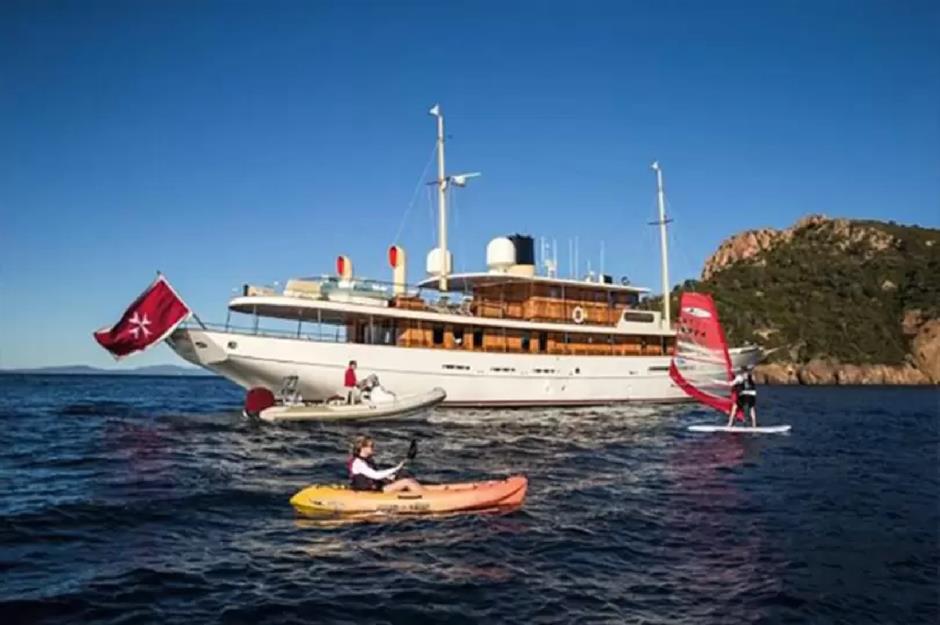 Author J.K. Rowling isn't known for her extravagant lifestyle, and has given an estimated $160 million (£119.7m) to charity over the years. But in 2016, it was reported that she had spent $29.8 million (£22.45m) on a luxury yacht. The Amphitrite, which Rowling bought from Johnny Depp, has three decks and can sleep 10 people. However, she owned the boat for less than 18 months. In June 2017, Rowling put the yacht up for sale again, a decision that's thought to have been motivated by the media backlash she received for the purchase. 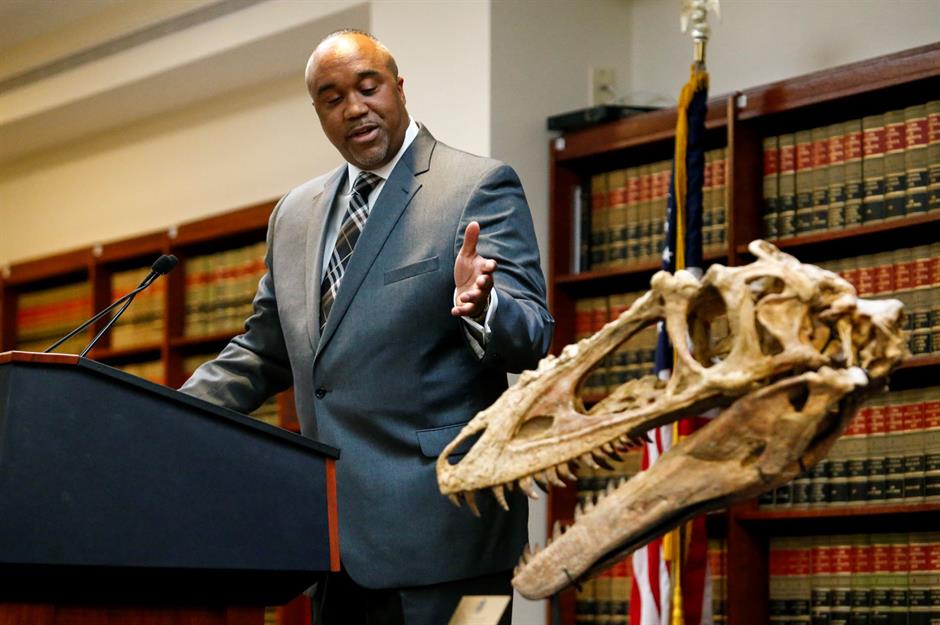 When you're one of the highest-paid actors in Hollywood, you can afford to loosen the purse strings a little. But when Nicolas Cage embarked on a bizarre spending spree, which saw him splurge on everything from ancient castles to shrunken heads, he reportedly managed to blow a staggering $150 million (£112m) in just a few years.

Now discover the famous TV and movie stars who spent all their money.