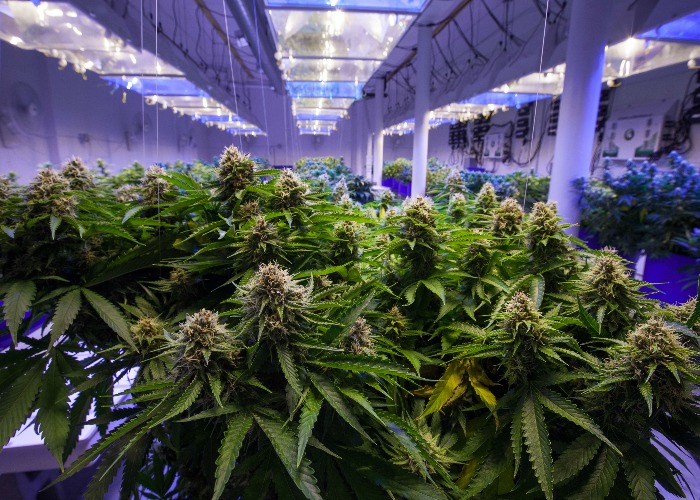 The Government’s changed stance towards medical cannabis and its gradual legalisation in US states could spell the beginning of a lucrative industry. Here experts explain how you can buy shares in producers and look at the risks involved.

The UK has a strange relationship with marijuana.

While the drug is illegal in this country and possession can lead to a five-year prison stretch and an unlimited fine, we are actually the world’s largest producer of legal cannabis.

The UK produced 95 tonnes of marijuana for medicinal and scientific use during 2016 – 44.9% of the world’s total – according to a report from the International Narcotics Control Board of the United Nations.

We are also the largest exporter of the drug with 2.1 tonnes shifted during the year in question. This accounts for around 70% of the world’s total. A phenomenal level of involvement for a country that’s so hostile to weed.

It’s a point acknowledged by Steve Rolles, a senior policy analyst at Transform, which campaigns for the legal regulation of drugs both in the UK and internationally.

“It is scandalous and untenable for the UK Government to maintain that cannabis has no medical uses, at the same time as licensing the world’s biggest government-approved medical cannabis production and export market,” he says.

The argument seems to be gaining traction. Ex-Conservative leader Lord Hague has become the latest figure to call for cannabis to be legalised, citing the case of Billy Caldwell (pictured below, with his mother Charlotte), an epileptic child that needs cannabis oil to treat his seizures.

The Government has just announced that the use of cannabis for medical purposes will be reviewed, although it will remain illegal for recreational use.

Even a cursory look at the predictions suggests the potential is huge.

The global market for medicinal cannabis alone is due to be worth £40bn by 2025, according to the Adam Smith Institute, an economic think tank, while the recreational market in the US alone is expected to be worth $24.5 billion by 2021.

The institute insists the prohibition on research, development, innovation and sales of cannabis is holding British business back at a time when we need to be even more innovative and even more global in our trade ambitions.

Sam Bowman, executive director at the Adam Smith Institute, believes Britain needs to re-evaluate its own drugs policies to make sure this growing market is in the hands of legitimate, regulates businesses – not criminal gangs.

“We have a growing body of evidence from abroad that legalisation and smart regulation are much better ways of curbing the harms cannabis can cause to users and their communities, and that straightforward bans push users into the hands of criminals,” he says.

Read more: how to double your investment returns with one simple change

The interest of investors

Of course, any rapidly growing area will attract the interest of would-be investors and cannabis, in all its various incarnations, is no different.

Getting into a growing industry at an early stage is often the best route to a handsome return.

Moira O’Neill, head of personal finance at Interactive Investor, acknowledges the potential looks attractive but warns any investment should be a very small portion of an overall portfolio for most people.

“Investors are always looking for the next big thing, but they should tread carefully here,” she says. “The legal marijuana industry predicts stellar growth but there are big risks attached, not least that they operate in an uncertain regulatory environment.”

Such investments tend to be extremely volatile and investors should be prepared for a bumpy ride. “I’d only recommend investing up to an amount that they would be willing to lose completely,” she adds.

Adrian Lowcock, investment director at multi-manager Architas, is aware of this area’s growth potential, with many US states having legalised it for both recreational and medicinal purposes in recent years.

Dispensaries are now legally operating in California (pictured) amongst other states.

“This has led to rapid growth in companies setting up to capitalise on the market and with the potential for huge profits as the drug is legitimised,” he says.

“You need to consider if you want to invest in the recreational or medicinal side.”

As far as recreational is concerned, Lowcock expects to see consolidation as brands establish an identity and reputation for quality with consumers. “However, there will be many which just fall by the wayside with only a few getting far enough to be successful,” he adds.

The medicinal side, he suggests, is more complex and interesting.

“Medicinal marijuana is not a new idea so groups with experience should have an advantage, but investors should treat this as similar to biotech – one bad result could hammer a company’s share price, while a good result could send the price rocketing,” he says.

That’s why it would come with a warning attached.

“Investors should be cautious when considering new markets,” he says. “The potential is huge, but it attracts a lot of new companies and many don’t make it, while those that do have spent a lot to get there meaning profits might not live up to expectations.”

Learn more about ethical investing and how to get started

What companies are involved?

One of the biggest names in this world is GW Pharmaceuticals of the UK.

This company, which is based in Cambridge, is a global leader in the development of plant-derived cannabinoid therapeutics.

It successfully developed the world’s first prescription medicine derived from the cannabis plant, Sativex, which is now approved in numerous countries outside of the United States for multiple sclerosis patients.

In addition, it also has a cannabinoid product candidate called Epidiolex, a liquid formulation of pure plant-derived cannabidiol, or CBD, which is in development for the treatment of a number of rare childhood-onset epilepsy disorders.

It has not been approved for use by the FDA or any other national regulatory agency.

Darius McDermott, managing director of Chelsea Financial Services, points out that AbbVie, a pharmaceutical company based in Maidenhead, has a cannabis-based drug, Marinol, which is FDA approved and helps alleviate nausea and vomiting for chemotherapy patients.

“This is just one of the company’s products, though, so it’s unlikely to be the main reason these funds/trusts are investing,” he says. “Artemis Global Income and Brunner Investment Trust have holdings of around 2.5%.”

Then there is Canopy Growth Corp, which in 2014 became the first cannabis company in North America to be publicly traded, is listed on the Toronto Stock Exchange. It wants to be the number one cannabis-producing company in the world.

There is also Aurora Cannabis, a Canadian-licensed cannabis producer that’s headquartered in Vancouver.

O’Neill at Interactive Investor said clients can purchase GW Pharmaceuticals, Canopy Growth, AbbVie and Aurora Cannabis on the platform. She also points out that you can hold your US and international shares in the same account as other investments.

Meanwhile, Laith Khalaf, senior analyst at Hargreaves Lansdown, said the company’s clients can trade in both Abbvie and GW Pharmaceuticals.

“For GW we can deal over the phone only, for AbbVie we offer online and telephone dealing,” he says. “Before you can buy US-listed shares, you also need to complete a W-8BEN form.”

This form, which can be completed online, enables UK residents to save up to 30% tax on income from their US and Canadian shares. Brokers providing access to such shares will have their own charging structures, so you need to ask around for the best deals.

However, Khalaf warns investors considering this emerging area need a high tolerance for risk, which is typically true of all biopharmaceutical companies.

“This is an area for sophisticated investors who have a good understanding of the market, and which factors will lead to the success of the companies they are investing in,” he says.

You should also remember that this industry is in its infancy, which makes predicting financial performance and valuation difficult, according to Lee Wild, Head of Equity Strategy at interactive investor.

“Given many cannabis stocks listed in Toronto have already priced in a boom from legalisation, investors should be wary,” he says. “Those still tempted by this new opportunity should consider buying only as part of a diversified portfolio.”

Warnings about the future

There are a few marijuana-related ETFs, but all are North American based and none of them UCITS so these options are fairly limited, according to Peter Sleep, Senior Investment Manager, Seven Investment Manager (7IM).

“There is the Horizons ETF and the Evolve Marijuana ETF (SEED, based in Canada), although this is tiny,” he says. “Both invest in public companies with significant activities in the marijuana business.”

Even if there were more options, Sleep wouldn’t get too excited. He views it as a “faddy investment” and is surprised investors are interested in marijuana, which is often smoked, while insisting on ethical investing and excluding tobacco.

“Investors should bear in mind that if marijuana is fully decriminalised it will become an agricultural commodity, and this will suggest the price will fall to its economic cost of production,” he points out.

It means that just like other commodities, the price of marijuana will rise and fall with demand and supply and be just another example of how investing in agricultural commodities can be a perilous business.

“Increased demand can be met very quickly by increased supply,” he says. “Supply at the moment may be constrained by law and by the difficulty growers encounter in using the legal and banking system, which are heavily regulated.”

Assuming these issues are overcome, Sleep points out that he understands it is relatively easy to grow marijuana, which suggests supply will be cheap and plentiful and this area of investment may not be very lucrative.

“The price of weed has fallen in Washington state since the recreational use of the drug was decriminalised in the US state in 2012,” he says. “The retail price has dropped from $35/gram to about $7.50/gram since 2015 in the past two years.”

Sleep insists potential for high growth does not automatically translate into a sensible investment. “The classic case is the airline industry,” he says. “It’s grown exponentially over the last 50 years, but it’s been very hard to make money.”

There are also other risks associated with buying overseas investments, such as the potential effect on returns of foreign exchange movements, according to Joel Dungate, an investment analyst at Redmayne Bentley.

He also points out there are potential tax implications. “Investing in securities denominated in a depreciating currency can trim total returns,” he explains. “Many collective investments control for these movements, but not always.”