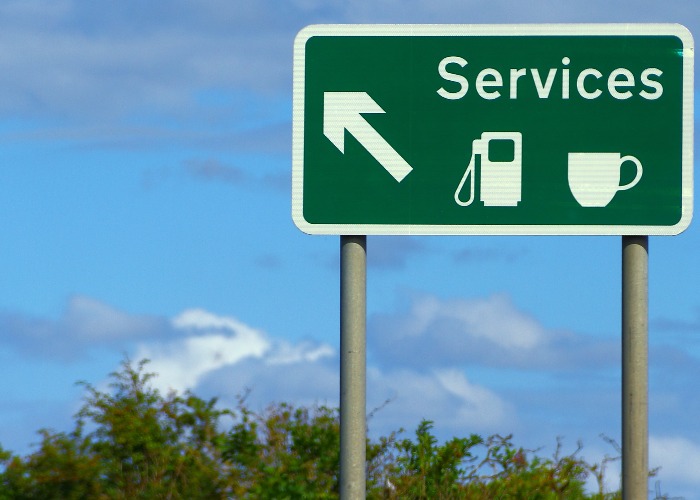 Motorists are paying nearly three times more for food and drink at motorway service stations. We explain how to dodge the 'snack tax' and highlight other places to avoid.

Drivers that stop at motorway service stations are being ripped-off when picking up snacks for their journey, according to new research.

Insurer Admiral carried out a mystery shopping exercise at 21 major motorway service stations across Britain to find out what a basket of seven food and drink items would cost.

The exercise revealed that motorists taking a pit-stop in the South West were handing over £15.78 for the basket of refreshments, which they could have picked up for £6.11 in a supermarket.

But even the cheapest motorway stations in the North West on average charged £12.58 for the same items, which is still more than twice as expensive as the supermarket alternative.

So, stocking up at before you set off will save you a lot more money than paying for the convenience on the road.

But it’s not just motorway service stations stops that could catch you out. Don’t forget about these other places charging extortionate prices for food and drink.

Earn cashback on all your spending

You might have made big savings booking your holiday, but that could all go to waste if you end up paying for in-flight snacks.

Last year, flight comparison site Kayak.co.uk found that passengers were paying up to 2,000% more for food and drink on a plane compared to buying the same item on the ground.

One of the worst offenders was Ryanair, which charged £2.34 for a 500ml bottle of still water perhaps they were trying to make up for the losses in luggage fees...

The cost of snacks like a muffin (£2.30 on easyJet flight compared to 25p in a supermarket) were also grossly inflated.

While many might realise airlines, especially budget ones, use this trick to make a profit from passengers paying low-cost fares, we’re still not immune from falling for it from time to time.

In a poll, 68% of loveMONEY readers admitted to getting caught out and buying food on the plane.

But there’s no reason to pay these extortionate prices. With some preparation, you can avoid paying over the odds by visiting a supermarket before you fly.

While airlines allow you to pack snacks there are rules on liquids you can bring in your hand luggage. To get around this you can just purchase drinks once you pass airport security.

Take a look at: EXPOSED: airlines cashing in on incredible in-flight food mark-ups.

Even a simple trip to the cinema could ruin your budget if you’re planning on getting some snacks to enjoy while watching the movie.

Last year, father of two Dean McQuade took to Facebook to express his outrage when a trip to Vue cost him £70, with the tickets for him and his two kids coming to less than half of the total, with the cost of Nachos and other snacks making up the rest.

Cinemas defend snack prices as their main way of making money, with most of the ticket cash taken at the box office going to film makers and distributors.

However, Vue cinemas and most others allow you to bring in your own cold food and non-alcoholic drinks, so always remember to pack some before you go.

Speaking of the cinema, make sure you learn how to get free and cheap tickets before you head off on your next trip.

When stocking up on snacks to take with you while driving, flying or even on a trip to the cinema be wary of mini convenience supermarkets.

Research from the Daily Mail back in April found that visiting a local Tesco Express rather than a bigger Tesco supermarket will cost you around 10% more for your shopping.

Meanwhile picking up items in an M&S Simply Food rather than a larger M&S Food Hall was found to cost 23.3% more in some cases.

With more and more of these local convenience stores popping up, you may find you are regularly paying more than usual for items you might normally get from a large out of town supermarket. So be careful.