While many of us enjoy the extra channels we get with a Freeview box, there are plenty of people willing to shell out for a pay TV service from the likes of Sky, BT or Virgin.

But just because we pay a monthly fee it doesn't mean we're always getting a premium service, as the latest subscription TV complaints data shows.

How complaints are calculated

Every three months Ofcom, the telecoms regulator, publishes info on the number of complaints it receives about the biggest pay TV providers.

The latest figures include companies with a market share of at least 1.5%, so the smaller providers are excluded.

Because it takes a while for Ofcom to publish its findings, this data only covers the three months from January to March 2022, so it's by no means representative of the latest trends.

The table below shows which providers have the happiest customers, and which have a lot of room for improvement.

Remember, these figures are only for complaints escalated to the regulator as the company has failed to resolve a customer's problem.

So, while these may appear low, the actual number of complaints made to each firm will likely be far higher. 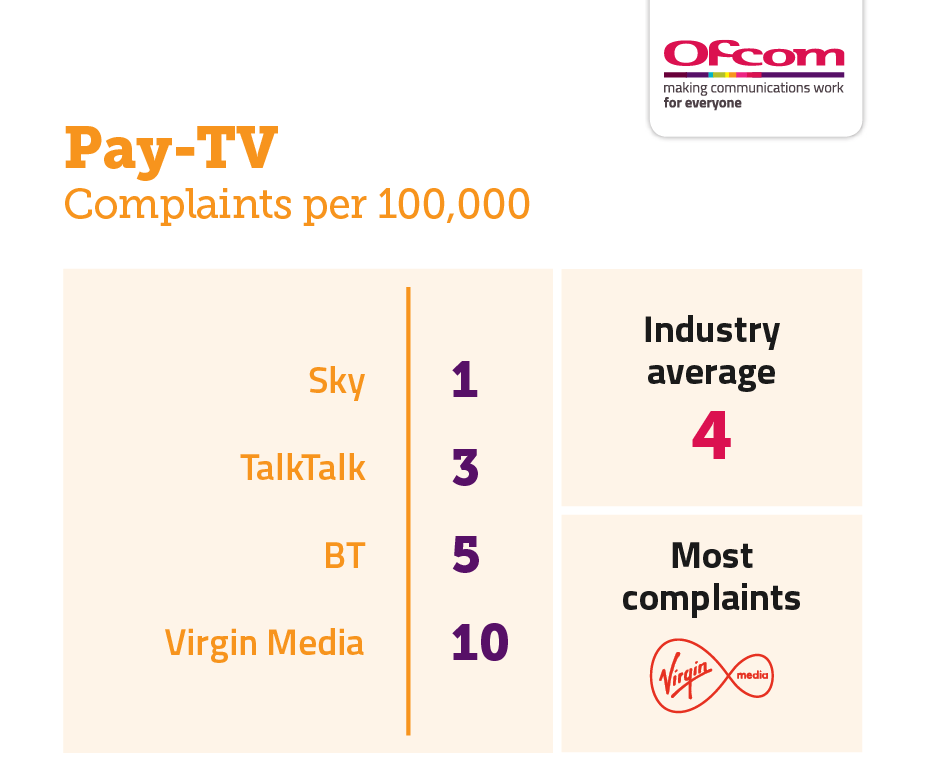 Virgin Media is once again the pay TV firm with the unhappiest customers.

According to Ofcom, the firm generated 10 complaints per 100,000 customers.

That's more than double the industry average (four) and means Virgin has now topped the complaints charts in 10 of the last 11 quarters.

TalkTalk was the second most-complained-about firm with three gripes per 100,000, which was the only other firm to come in under the industry average.

Opinion: leaving Virgin Media is far harder than it needs to be

Sky was the firm with the lowest level of complaints for the 10th straight quarter, generating just one per 100,000 customers.

If you fancy joining Sky, you can head this way to see its latest deals (this is an affiliate link, meaning we may be paid for any service you sign up for).

TalkTalk took the runner up spot with three complaints per 100,000.

Below are the results over the past six quarters in full to give you a clearer picture of how well (or not) the various pay TV providers treat their customers over time.

Complaints to Ofcom per 100,000 customers over the most recent 18 months

If you suspect you’re paying too much or suffering from a rubbish service from your pay TV provider, don't just accept it – switch!

You can compare deals available in your area with broadbandchoices.co.uk.

So, there you have it, your round-up of the worst pay TV firms.

How to cut the cost of your Sky TV, broadband and phone bills

How to save money on your BT phone, broadband and TV bills