The Suez Canal and other megaprojects that changed countries forever 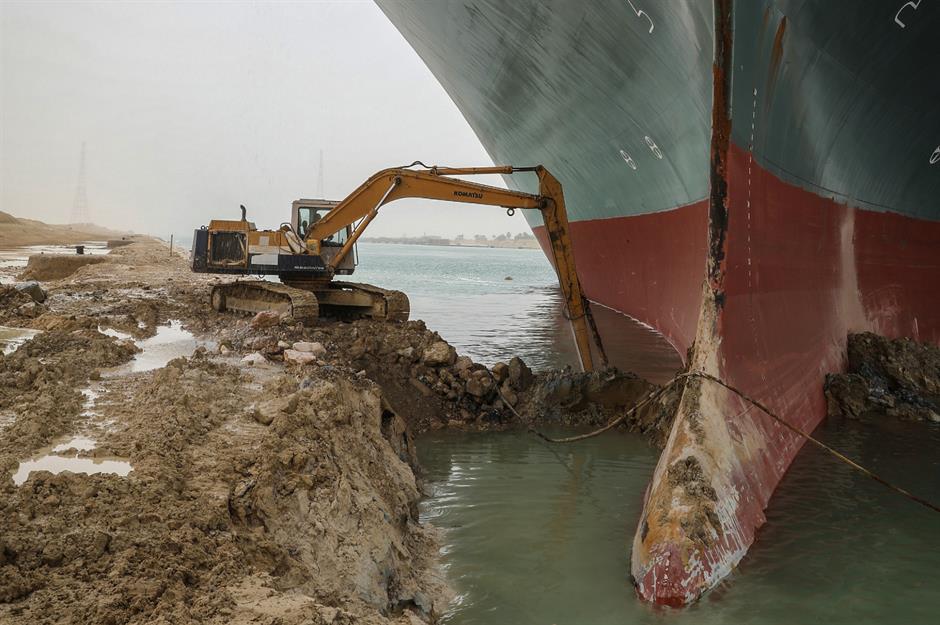 Last week the Suez Canal came to a standstill as a huge container ship called Ever Given ran aground in the southern part of the canal on Tuesday (23 March), blocking traffic from both sides. The 200,000-tonne tanker, operated by Taiwanese company Evergreen Marine, is one of the world's largest container ships, stretching the length of four football pitches, and was en route from China to Rotterdam. Last Thursday the canal was officially suspended as the authorities continued to work to dislodge Ever Given. Images of small diggers at the shore trying to dig out the massive ship have gone around the world. On Monday (29 March) it was reported that the stern of the ship had been freed from the shore by tug boats but the bow remains stuck, with efforts continuing to dig it out. Every day it remains stuck the ship is holding up an estimated $9.6 billion (£6.9bn) of goods.

Click or scroll on to see how much of the world's trade passes through the canal today and why it's so important... 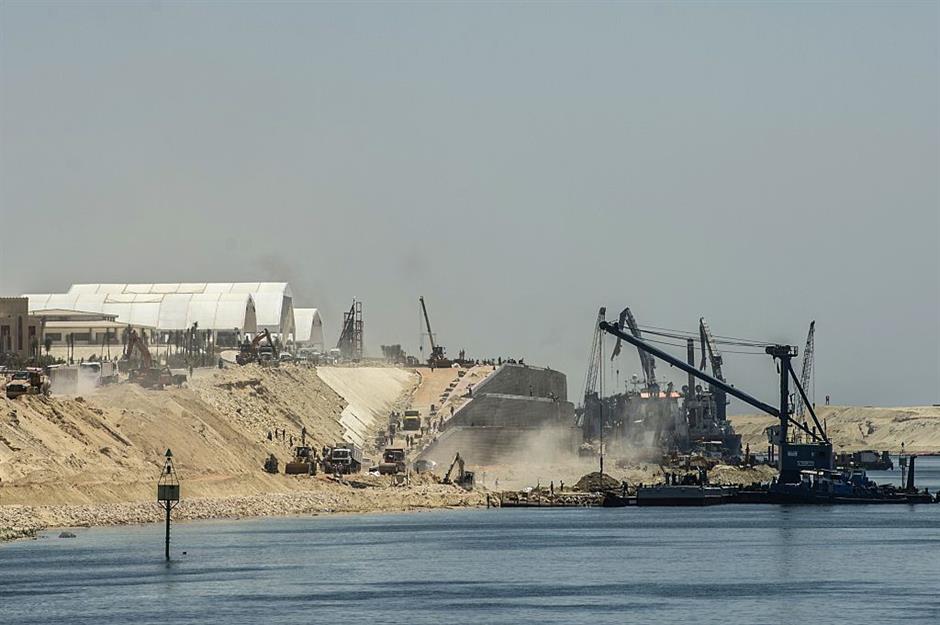 The blockage has underlined the importance of Egypt's trade channel, where a staggering 12% of all global trade passes. The Syrian government says the Ever Given blockage is holding up vital oil supplies from being delivered to the country. And US suppliers say it could worsen already stretched supplies of toilet paper, coffee and furniture.

Construction of the original Suez Canal was started back in 1859 by French investors, and took 10 years to complete. In 1956 the key trade channel later became the subject of conflict between Egypt and the joint forces of France, Great Britain and Israel after the British military continued to occupy the canal area despite Egypt's independence in 1922. Known as the Suez Crisis, Egypt won control of the channel later that year.

The New Suez Canal project was created to help revive Egypt's economy and make the country a popular trade centre once again. Work began in 2014, digging a new 44.5-mile (72km) section to reduce congestion along the route and cut waiting times for vessels by seven hours. The E£20 billion ($1.2bn/£955m) project was finished a year later, when officials proclaimed it a "gift to the world". Following the expansion, the canal's revenues increased by 35% year-on-year, to a record E£99.1 billion ($6.1bn/£4.9bn) in 2017/18.

But the Suez Canal is not the only megaproject to change a country's fortune, for good or bad. Click or scroll through the megaprojects that changed countries forever...

China's Great Wall has become an iconic landmark, and one of the most recognisable historical sites on the planet. Built over 2,000 years ago, the structure spans more than 13,171 miles (21,200km) and is made up of multiple walls and fortifications. The Great Wall was an important defence mechanism during both the Qin and Han dynasties, and was also extended and reinforced during the Ming era. Today the Great Wall is a valuable source of tourism for China, with over 10 million people visiting every year (before the COVID-19 pandemic).

From China's Great Wall to the US Interstate Highway, the most expensive megaprojects ever

It took 14 years and $15.1 million – the equivalent of $384 million (£305m) today – to build the Brooklyn Bridge, and by the time it opened in 1883 over two dozen construction workers had died during its construction. Before it was built people relied on irregular and limited-capacity ferries to travel between Manhattan and Brooklyn. The bridge's construction enabled easy commuting and supported the economic growth of New York City. An estimated 150,000 people still use the iconic bridge every day. 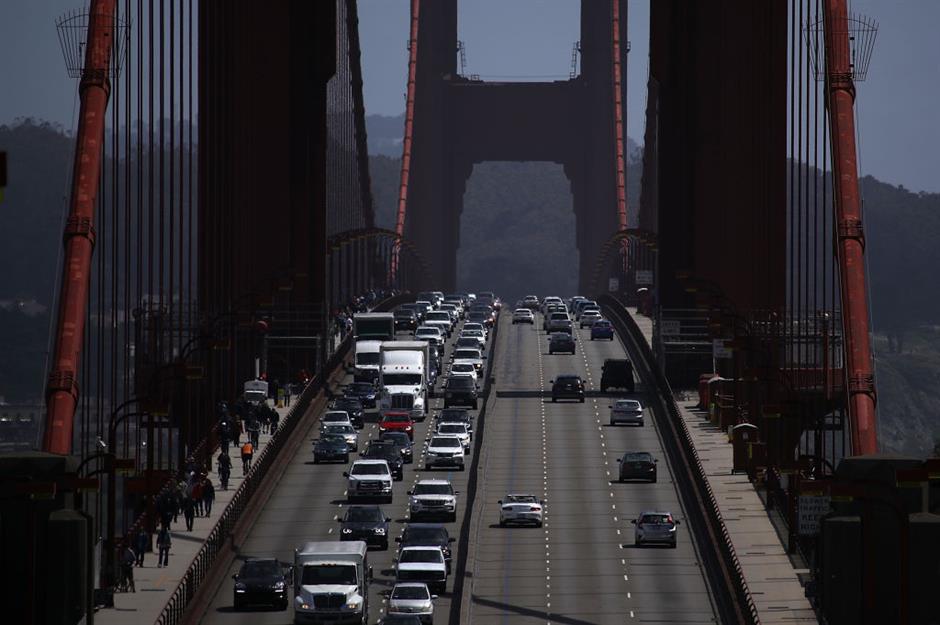 The Golden Gate Bridge was completed in 1937, following four years of complex and dangerous construction work. When it opened it took the titles of both longest and tallest suspension bridge in the world. Before the bridge was built, the only way to reach Marin County from San Francisco was by boat. As the city of San Francisco began to thrive and cars became more affordable, better transport infrastructure was needed in order to prevent the city's growth stagnating. The bridge came in under its $35 million budget, costing a relatively cheap $27 million (£21.9m) to build, the equivalent of $481 million (£383m) today, and has since become one of the most iconic parts of America's landscape.

Work began on creating America's Interstate Highway System in 1956 after President Dwight D Eisenhower signed the Federal-Aid Highway Act of 1956, launching a system of roads to replace the poorly connected and hard-to-navigate 'trails'. The plan was to make the whole of the US accessible to anyone with a car. The Interstate brought the rise of suburbia to America, as well as giving birth to the concept of taking a road trip for fun. When completed the system cost $119 billion, as announced in 1996, which is the equivalent of $190 billion (£151bn) in today's money. Covering 46,876 miles (75,440km), it's the largest engineering project the world has ever seen.

Dubai's International Airport was opened in 1960, and has since become one of the world's busiest airports. It's been extended over the decades, including the construction of Terminal 3 between 2004 and 2008 at a cost of around $4.55 billion (£3.71bn). The airport is incredibly important for Dubai's economy, accounting for 27% of its GDP, employing 90,000 people and contributing more than $26.7 billion (£21.7bn) before the COVID-19 pandemic. 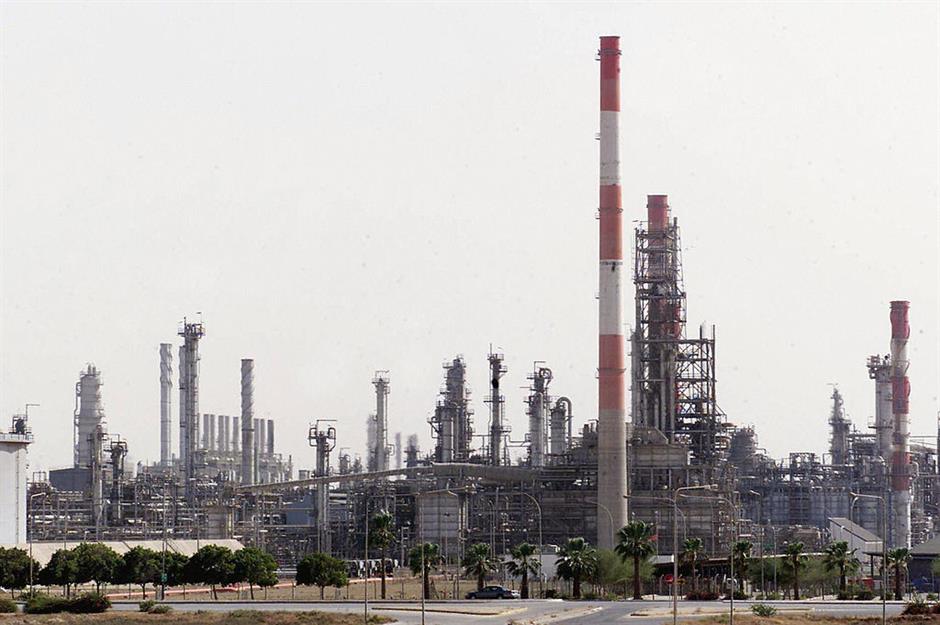 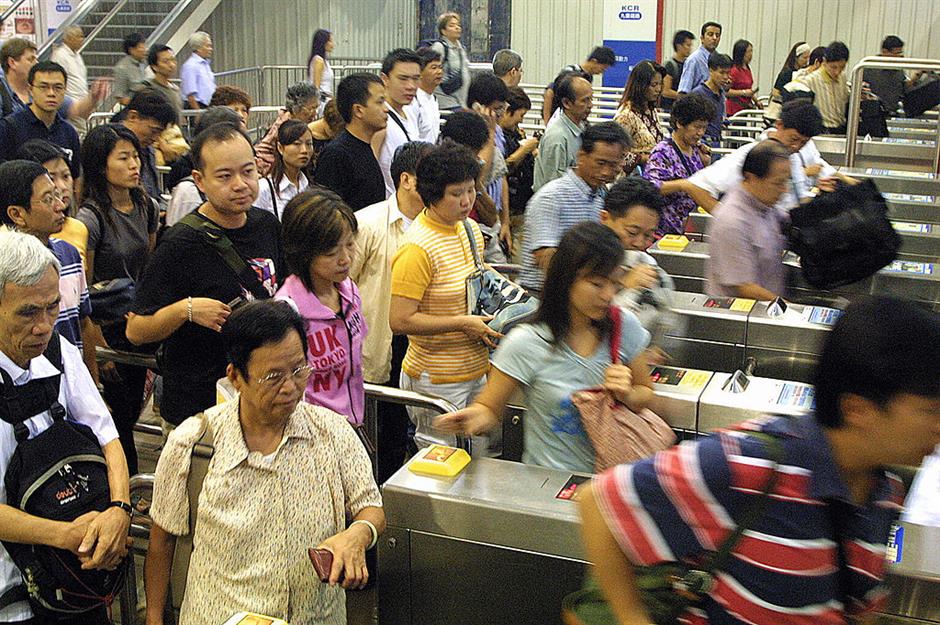 The first line on the Hong Kong Mass Transit Railway (MTR) opened in 1979, and it has since become an essential part of daily life in the territory. With over five million users a day, it's Hong Kong's most popular form of transport. Built as a solution to the increasing road congestion caused by the region's thriving economy, the MTR has supported the growth of areas outside of the central districts and is also an important part of the economy, with a net profit of HK$16.8 billion ($2.1bn/£1.7bn) in 2018, although this figure also includes the company's property portfolio in mainland China. 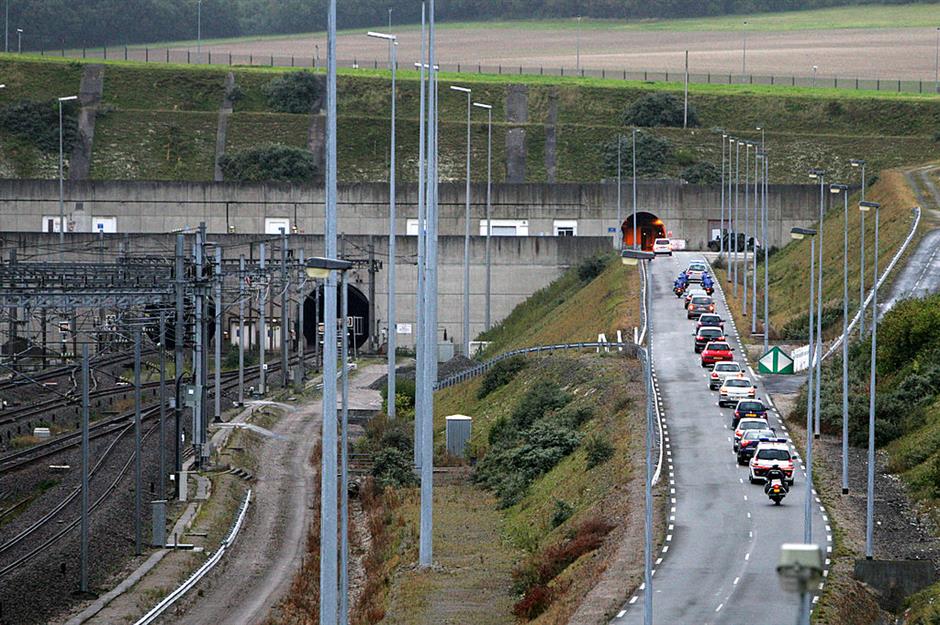 Opened in 1994, the Channel Tunnel connected Britain to mainland Europe for the first time. Construction on the underwater tunnel took six years, with 10 workers killed in the process and it was 80% overbudget, costing a whopping £4.65 billion, the equivalent of £9 billion ($11.3bn) in today's money. Pre-COVID, more than 60,000 people used the tunnel every day. Not only has it increased tourism to and from the European continent, it's also made trade much more efficient; around 26% of goods sold between the UK and mainland Europe pass through it, worth £120 billion ($150bn) every year. 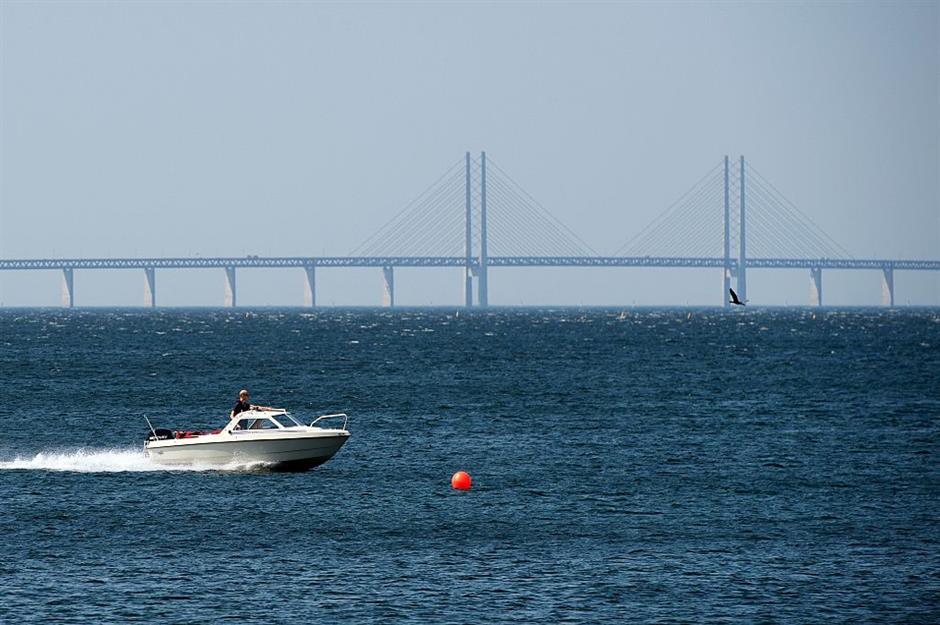 Before the Öresund bridge was completed in 1999, travelling between Copenhagen in Denmark and Malmö in Sweden meant relying on weather-dependant ferries. Stretching out across 4.9 miles (7,845 metres) in total, the bridge has made the journey between the two cities much quicker by both car and train. According to the Öresund Committee it has meant a national economic gain of $9.19 billion (£7.46bn) for both sides, thanks to increased commuting. Over 230 million people have now crossed the bridge.

The 2004 Athens Olympics were ill-fated for Greece's already dwindling economy. After delaying preparations for the games, a rush to complete construction in time meant a 97% overspend, eventually totalling nearly $11 billion (£8.9bn). Hosting the games meant building a new airport, subway system and sports stadiums, many of which remain empty today. The games greatly contributed to the country's financial decline, with taxpayers in Athens continuing to foot the bill until the debt is paid. 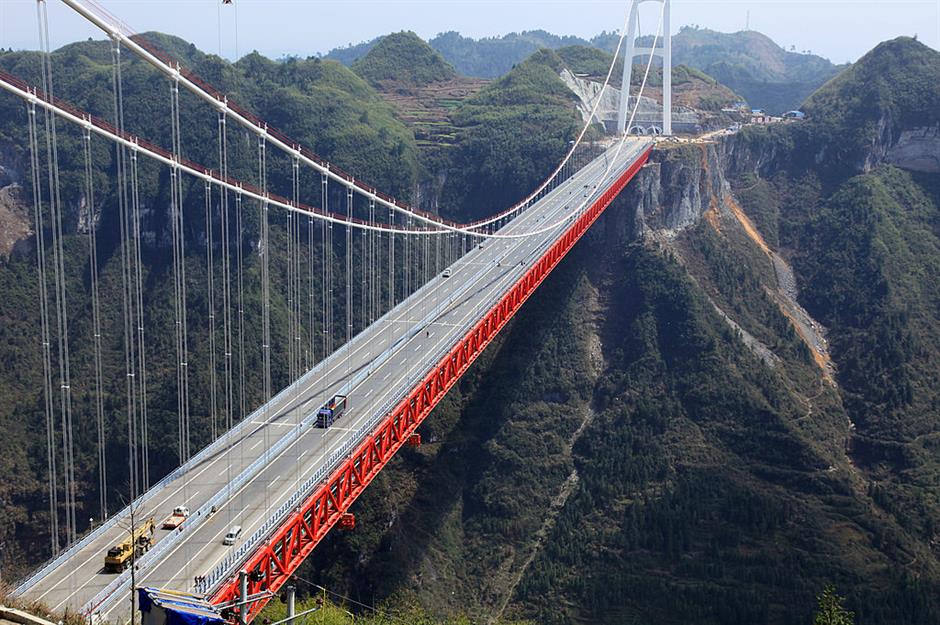 China's Aizhai Bridge took four years to build, and was completed in 2011. The bridge links two tunnels on both sides of a mountain, enabling travellers to avoid the steep, winding roads and cutting the journey between Jishou and Chadong from four hours to one. Sitting 1,200 feet (355 metres) above the Dehang Canyon, it's the world's highest bridge, built at a total cost of $610 million (£497m). 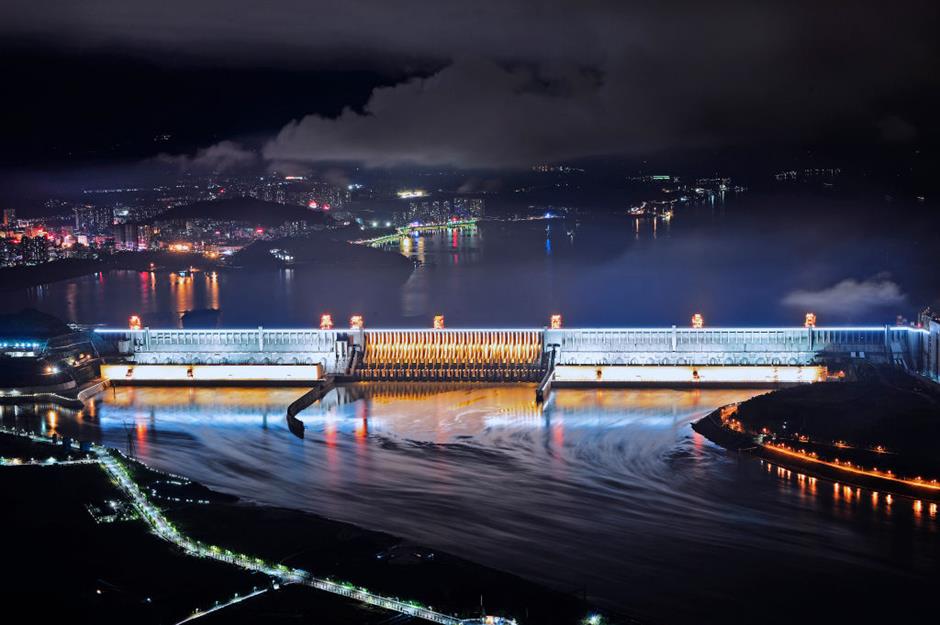 Completed in 2006, the Three Gorges Dam is one of the most controversial megaprojects in recent history and it wasn't fully operational until 2012. Dreamed up as far back as 1919, the hydroelectric gravity dam, set between the banks of China's Yangtze River, cost $37 billion (£30bn) to build and displaced 1.4 million people. In 2011 the Chinese government admitted the project had "urgent problems", and promised $18 billion (£14.6bn) in funding to offset the environmental damage caused, which reportedly included landslides, submerging towns and altering ecosystems. 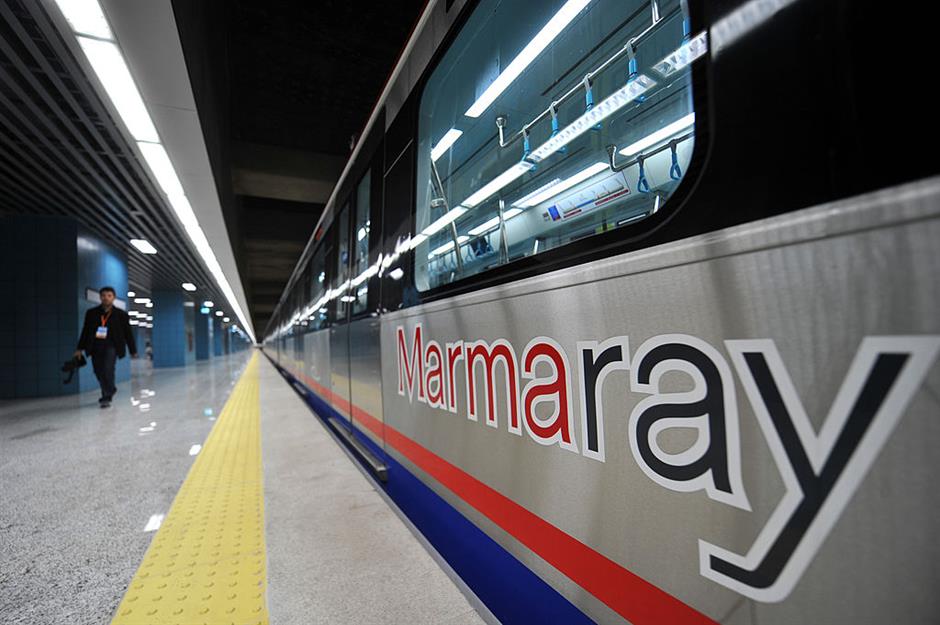 Before the Marmaray Tunnel was opened in 2013, the only transport links between the European and Asian sides of Istanbul were ferries and a couple of bridges. The 47-mile (76.3km) underwater railway line connects Kazlıçeşme, Zeytinburnu in Europe with Ayrılıkçeşmesi in Asia via the Bosporus Strait in just four minutes. The railway's commuter service began in March 2019, and is expected to carry around 1.7 million passengers daily by 2025, easing traffic congestion and reducing air pollution in the city.

After a national referendum approved the project by a majority of 76.8% in 2006, the Panama Canal expansion began in 2007. The $5.25 billion (£4.28bn) project was designed to allow large ships, which have grown a lot since the canal was built in 1914, to pass through the country. The project was completed in 2016. The Panama Canal is vital to the country's economy, accounting for 40% of its GDP, and the Panama Canal Authority was expecting a further $2.1 billion (£1.7bn) in annual revenues thanks to the expansion. 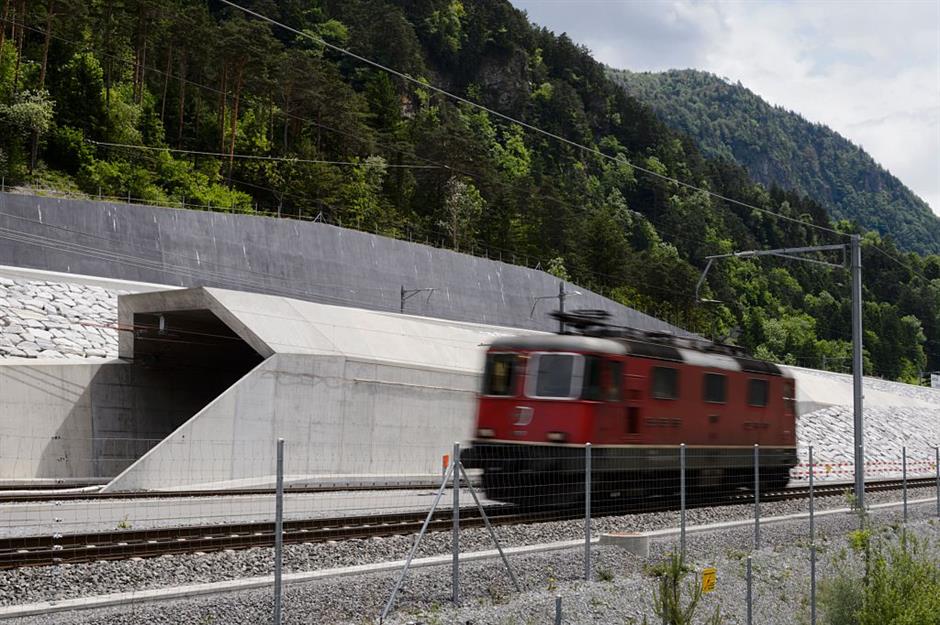 After 17 years in construction, the Gotthard Base Tunnel opened in June 2016. As the world's longest and deepest railway tunnel, it provides an important route through the Swiss Alps, negating the need to navigate around treacherous winding mountain roads. This means fewer fatal crashes of freight trucks as well as greatly reducing journey times through the route. The 35.4-mile (57km) tunnel also encourages a shift from freight trucks to trains, resulting in less damage to the environment.

The Hyderabad Metro was opened in 2017. The elevated railway line cost $2.62 billion (£2.13bn) to build and was in response to the growing population of Hyderabad city in Andhra Pradesh, India. With the capacity to carry 60,000 passengers per hour and cutting journey times by up to 70%, the metro revolutionised travel throughout the region. The new railway not only makes commuting easier and reduces traffic but also decreases carbon emissions by around 3,100 tonnes a year. However, there has been controversy surrounding the project when a 24-year-old woman died in September 2019 after concrete from the structure fell on her. 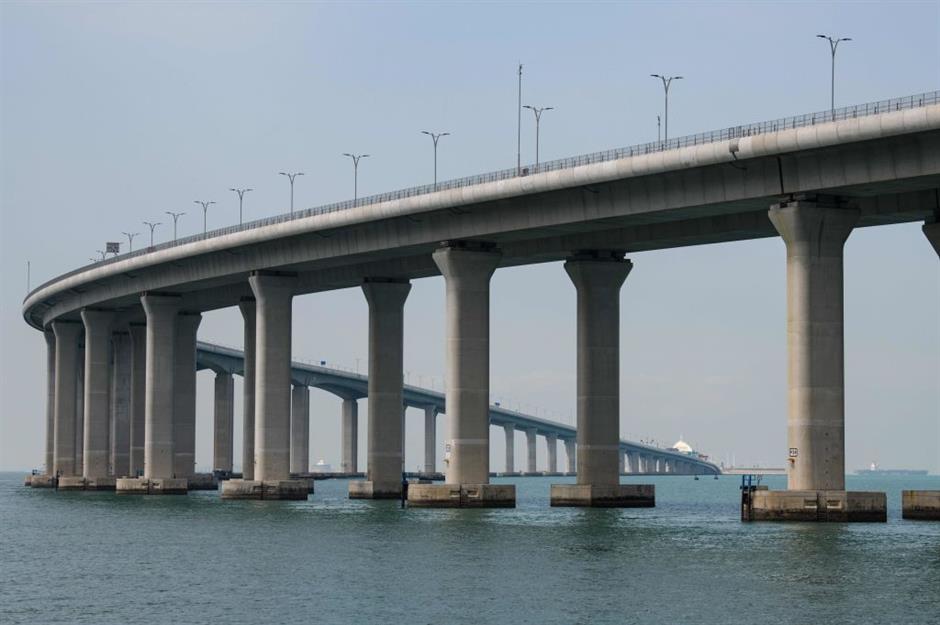 The Hong Kong–Zhuhai–Macao Bridge is the world's longest sea bridge, spanning a total of 34 miles (55km). The bridge connects Hong Kong, Macau, and Zhuhai, providing the east and west of the Pearl River Estuary with direct road connections for the first time. Opened in 2018, two years later than planned, the bridge cost $18.8 billion (£15.2bn) to build and is expected to see a substantial increase in visitors from Macau, Zhuhai and western cities to Hong Kong.

Opened in 2018, the Addis-Djibouti standard gauge railway (SGR) is Ethiopia's first railway in a century. The line connects the country's capital of Addis Ababa to Djibouti, an important port with over 95% of Ethiopia's trade passing through it. The SGR, Africa's first fully-electrified railway, also cuts the journey time between the two cities from two days via road to 12 hours by train. The $4.5 billion (£3.6bn) railway was part-financed by China through loans of $2.5 billion (£2bn). 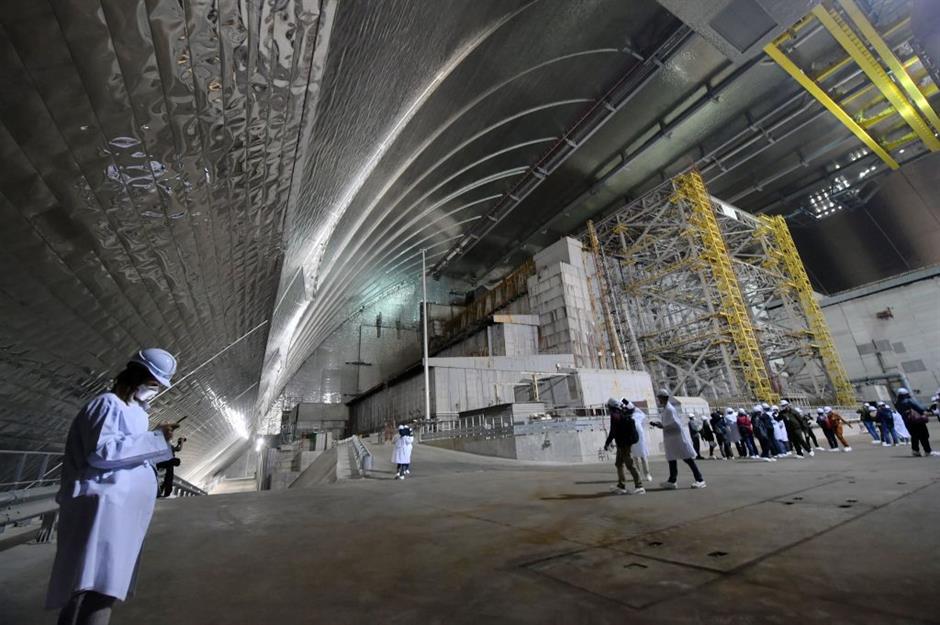 Since the Chernobyl disaster in 1986, thousands of people have died from exposure to the harmful radiation released from the power plant in Ukraine. The New Safe Confinement project was established in order to prevent the continued release of radiation from the remains of Reactor No. 4, which was destroyed in the disaster. Work on the 620-by-660 feet (190-by-200 metre) structure began in 2007 and was completed in summer 2019, at a total cost of $1.6 billion (£1.3bn).