British Airways through the ages 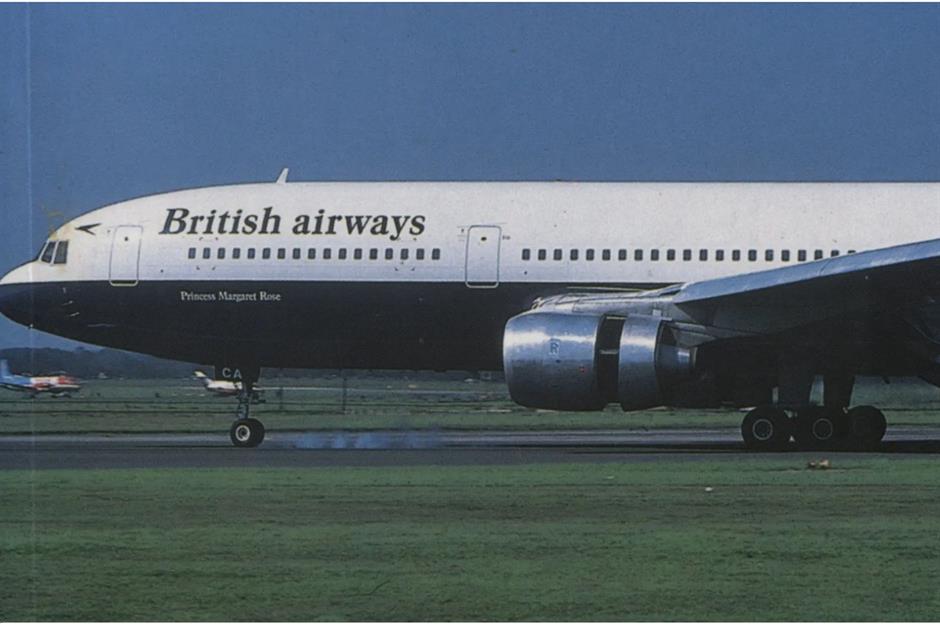 Courtesy of British Airways
As British Airways tumbles down the airline rankings following a series of high-profile failures, we look back at the history of this much-loved British icon to see where things started to unravel. 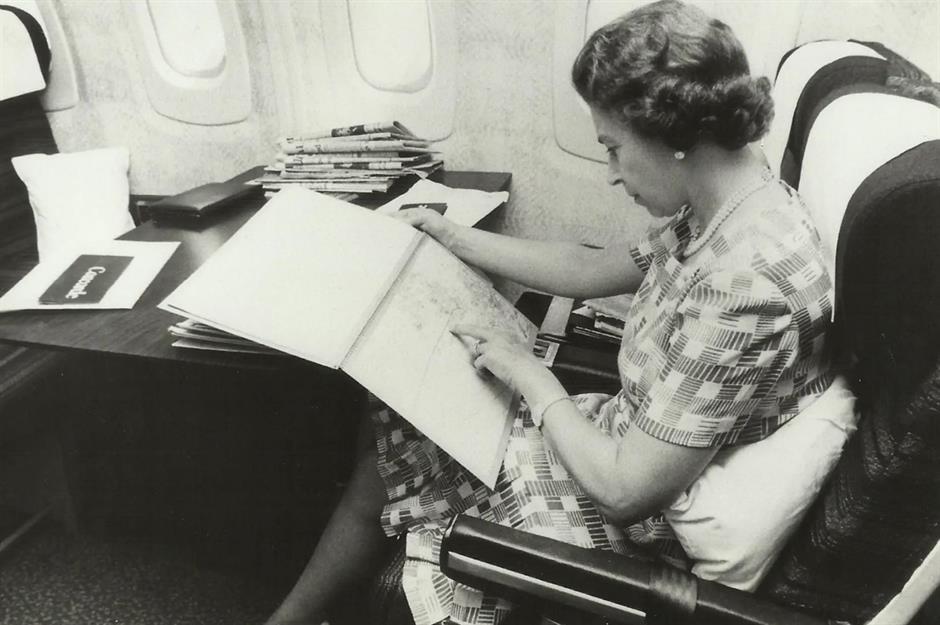 Courtesy of British Airways
Prime Minister Margaret Thatcher called for the privatisation of BA, so the airline would no longer receive state support. In July 1979, privatisation plans were delayed as a recession loomed. The situation was not helped by high fuel prices, causing BA to scrap unprofitable routes, cut staff and retire older aircraft prematurely in 1980. BA reported a loss of £112 million in 1981-82 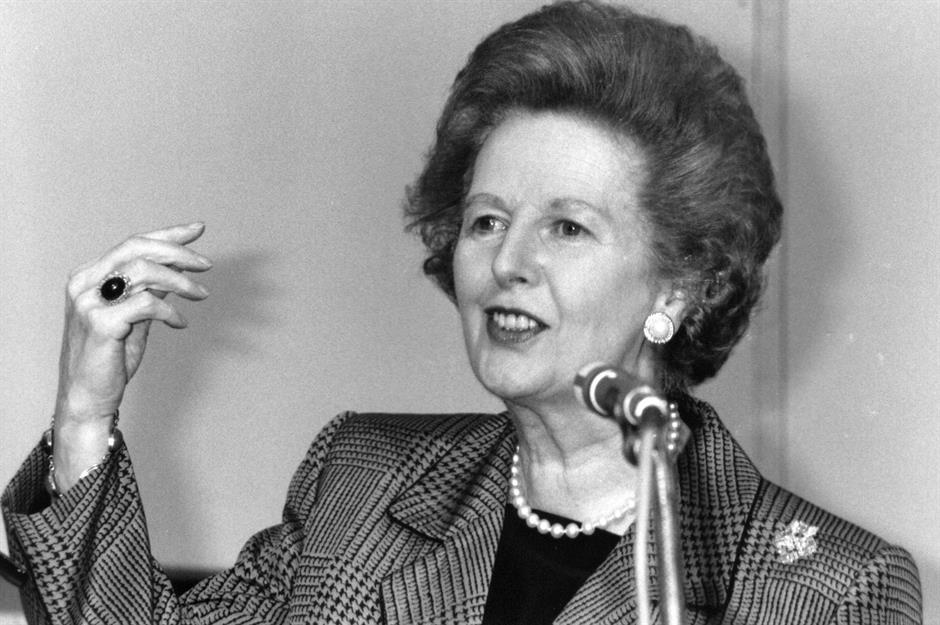 Margaret Thatcher called for the privatisation of British Airways, so the airline would no longer receive state support. In July 1979, privatisation plans were delayed as a recession loomed, inflicting losses of $254m in the year to 31 March 1981, down from a $37 million profit according to the New York Times. The situation was not helped by high fuel prices, causing British Airways to scrap unprofitable routes, cut staff and retire older aircraft prematurely in 1980. 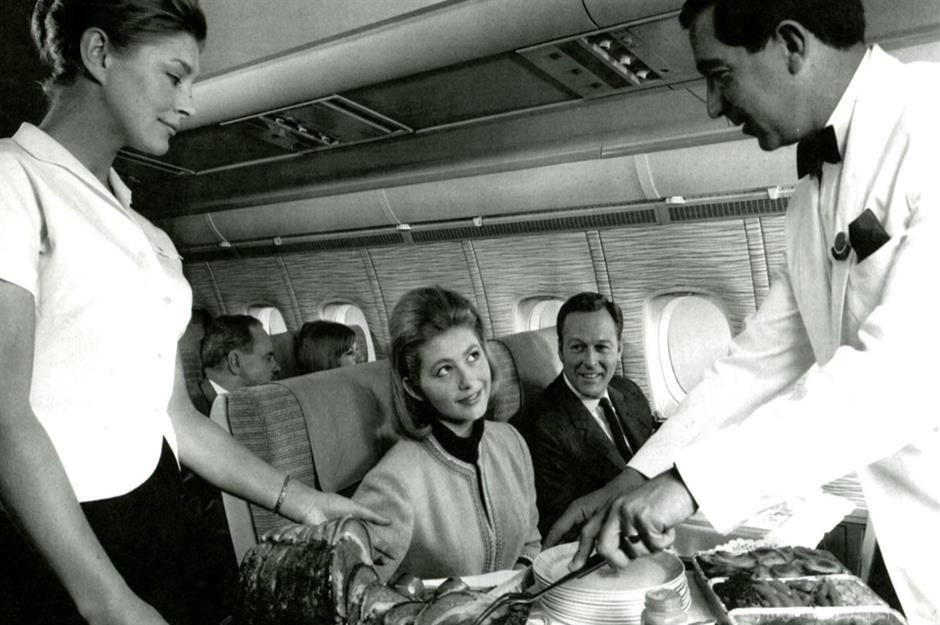 Unfortunately, the recession continued to bite for BA in 1981, prompting it to store several aircraft in the US and put them up for sale. Hoping to revive its fortunes, it launched the ‘World’s Favourite Airline’ campaign in 1983. During the 1980s, flights were traditionally pricier, but you could get a gourmet meal service and complimentary cigarettes and champagne. During the 90s, the airline introduced reclining seats and five-course meals – but this is no longer the norm. 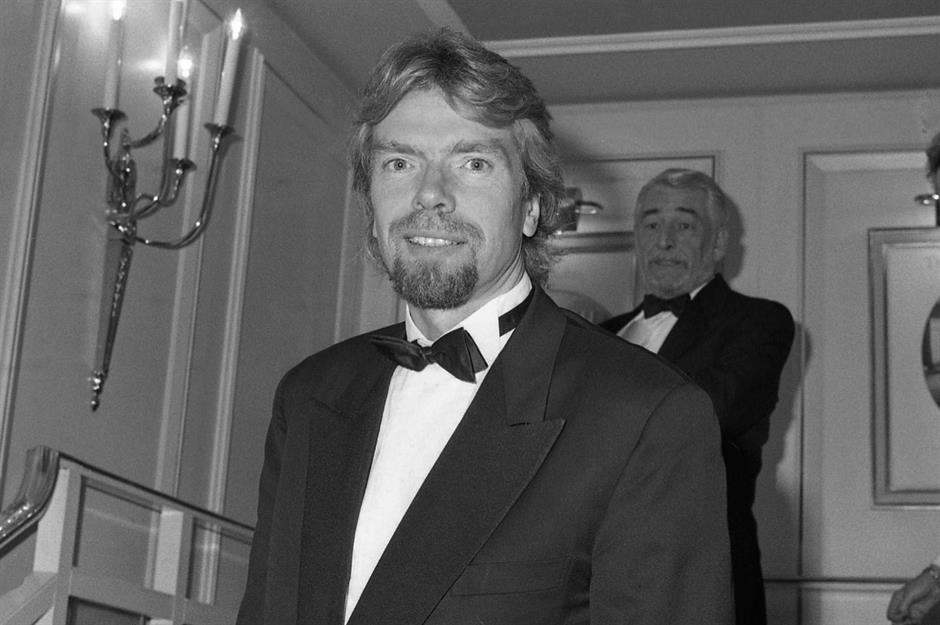 Courtesy of Shutterstock/David Fowler
One of British Airways’ fiercest rivals Virgin Atlantic started flying in 1984. There was speculation in the press that British Airways used unethical methods to win Virgin’s customers and monitor the airline’s activities, as well as conducting a smear campaign to damage its business. When British Airways accused Virgin Atlantic founder Richard Branson of fabricating these claims, he sued for libel and was paid £610,000 in a settlement at the beginning of 1993. 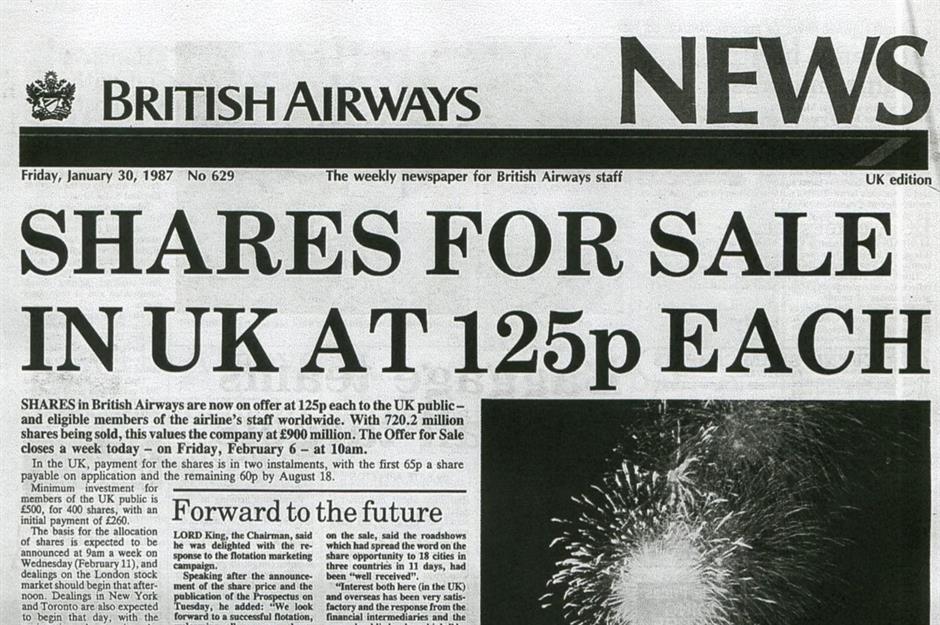 After years of the airline being pushed to privatisation, BA finally floated on the London Stock Exchange in February 1987 in a “hugely oversubscribed floatation.” At the end of the year, financially-troubled British Caledonian merged with BA.

The impact of the Gulf War 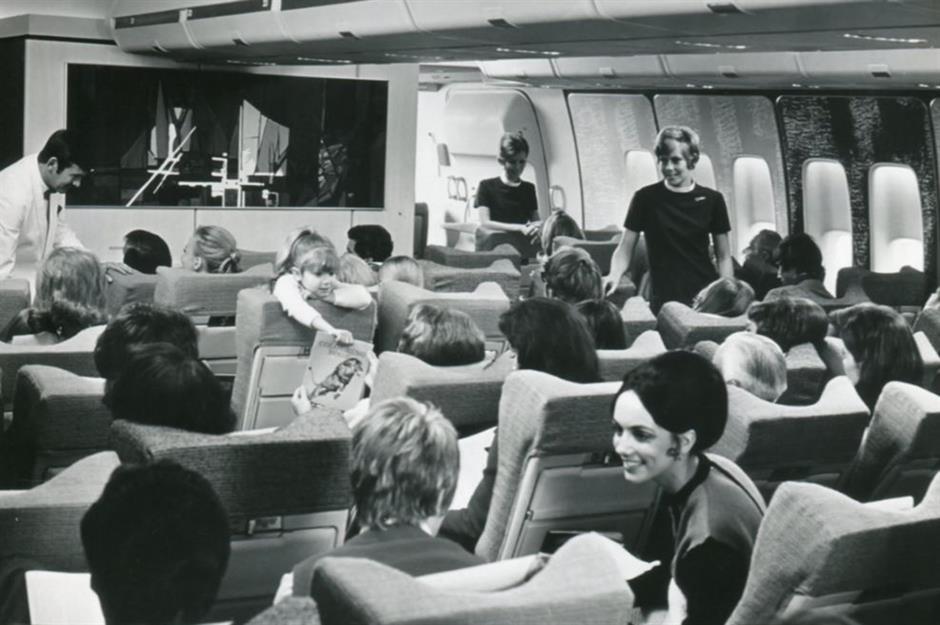 At the start of 1991, the Gulf War caused a significant loss of traffic, leading to job losses and the deferral of several aircraft deliveries. In a bid to revive passenger numbers, BA launched ‘The World’s Biggest Offer,’ offering to give away every seat free on its international services on 23 April 1991. Unfortunately, the downturn continued as the airline ditched several uneconomic services. 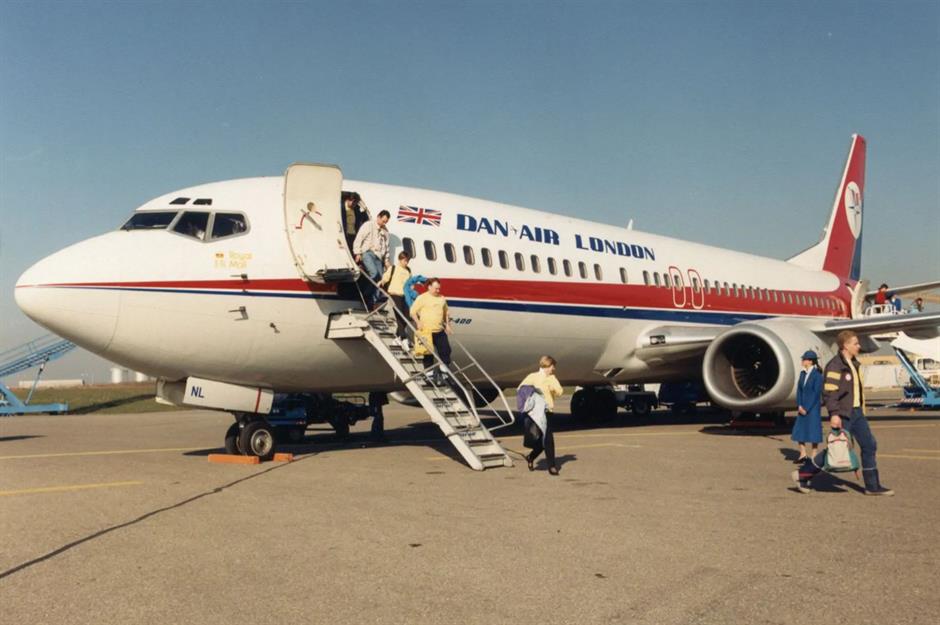 In June 1991, BA unveiled a £10 million package of customer service enhancements, including new lounges, check-in facilities, Club World catering and passenger service enhancements. The airline focused on improving profitability at Gatwick Airport in 1992 and bought assets of the holding company for Dan-Air to create a low-cost operation, with a larger network of European services.

Cabin crew go on strike in summer of '96 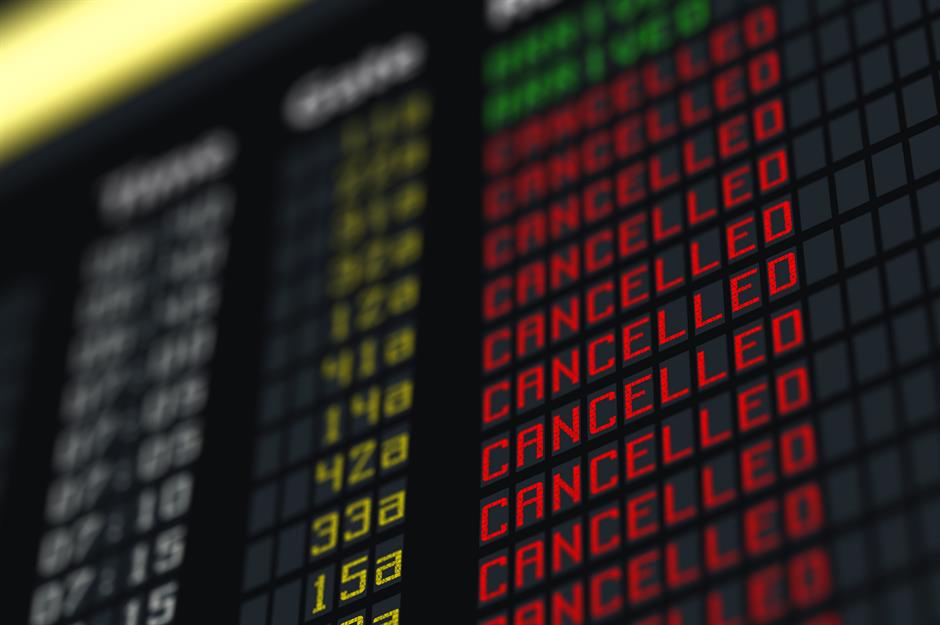 Facing an economic downturn in some of its key markets, BA revealed its Business Efficiency Plan in May 1996 to deliver £1 billion in annual savings in three years under chief executive Robert Ayling. But this prompted strikes by cabin crew during the peak summer period, which had “a serious effect on revenue and profit” to the tune of £125 million. 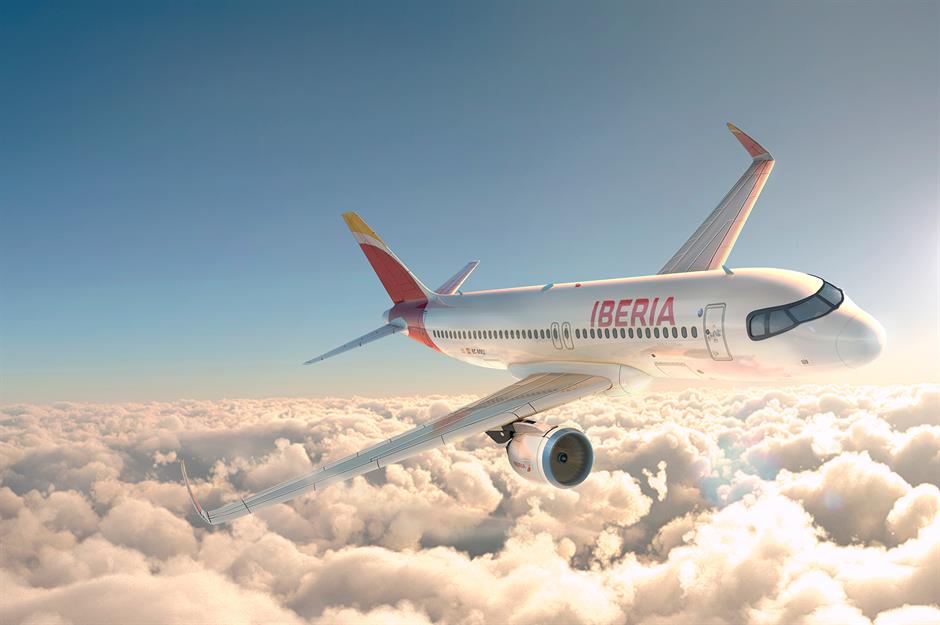 Courtesy of Iberia
In 1997, BA started talks over a co-operation agreement with Iberia, Spain's national airline, and bought a 9% stake in it in February 1999. Both airlines would merge in 2011 to form International Airlines Group (IAG). 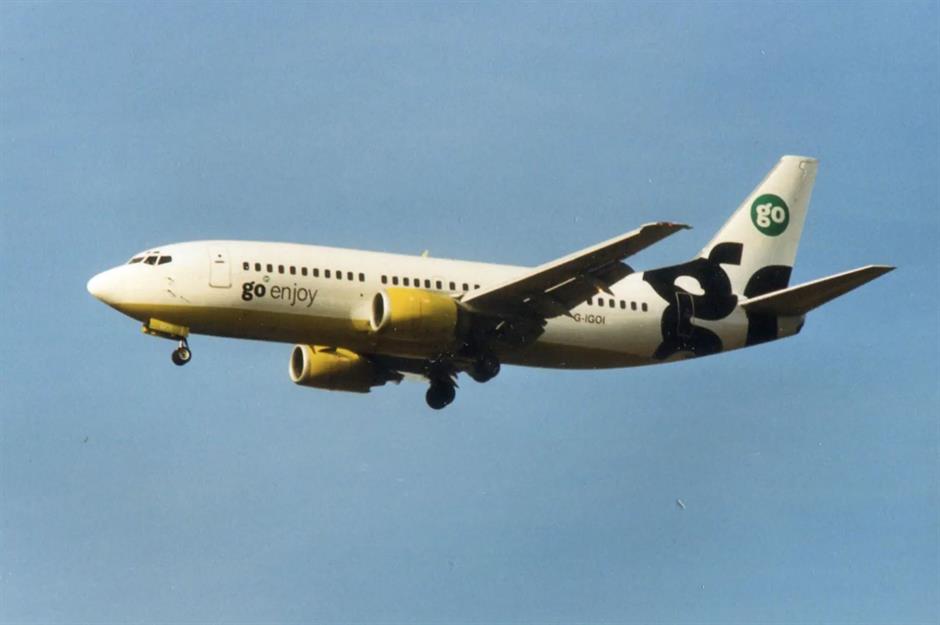 Courtesy of British Airways
As 1997 drew to a close, BA announced a low fare, no-frills airline known as ‘Go’ that would start flying in Europe in 1998. The new airline was to be based at Stansted Airport and operate as a separate business. Go was sold in 2001 to private equity firm 3i for £100 million. BA hoped the sale would help restore profits at its loss-making European operations. 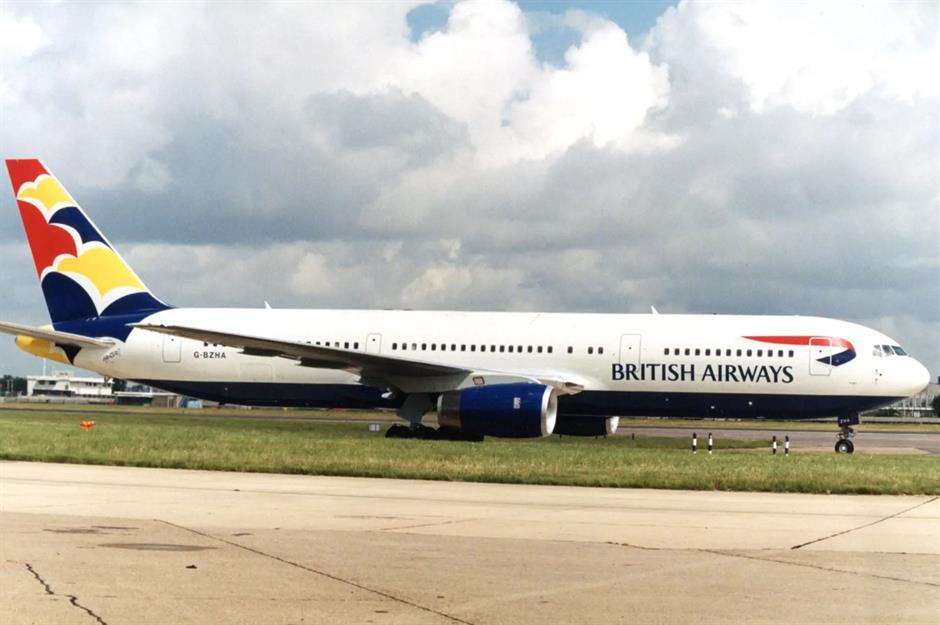 Courtesy of British Airways
Chief Executive Ayling was ousted and replaced by Rod Eddington in mid-2000 amid mounting pressure from shareholders following “expensive disasters”, according to The Guardian. Among the strategies under fire was a proposed tie-up with American Airlines, staff cuts and the so-called ‘ethnic tailfin,’ which attracted controversy. It took nearly nine years to repaint the tailfins with the Union Jack with the last aircraft repainted in 2006. 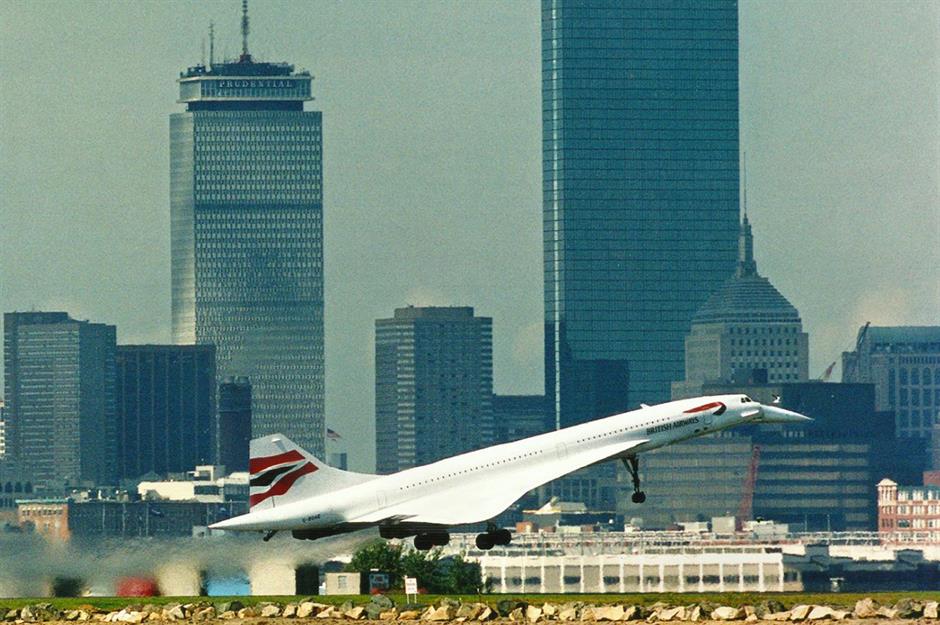 Courtesy of British Airways
All Concorde operations were cancelled in August 2000 following the tragic loss of an Air France aircraft near Paris Charles de Gaulle on 25 July, which killed 113 people. According to reports, the Concorde service from Paris to New York ran over debris on the runway that fell from another plane, piercing one of the tyres, which exploded and hit a fuel tank, sparking a fire. BA modified its Concorde aircraft in early 2001, spending £27 million on modifications and upgrades. 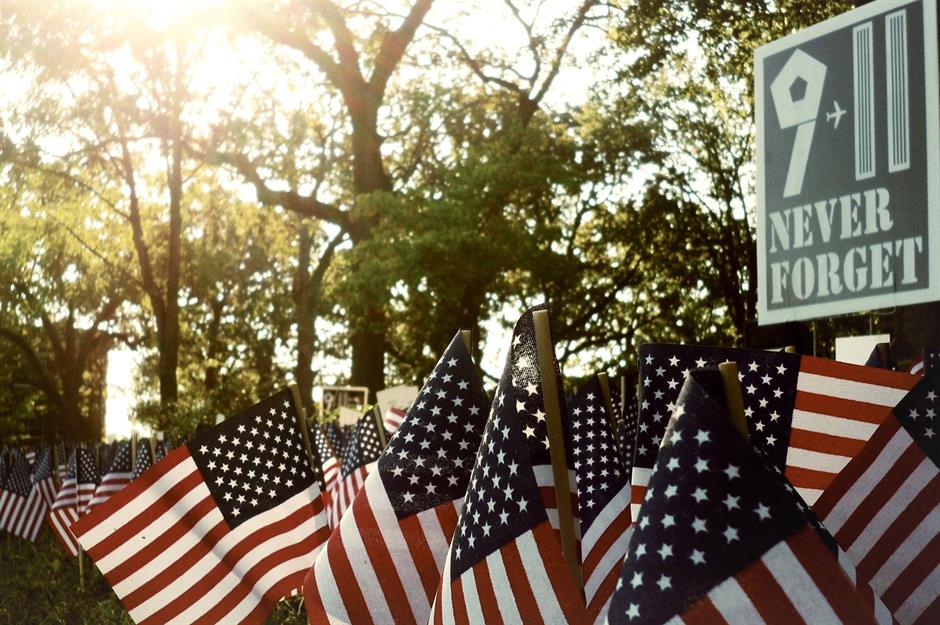 One of the worst days in aviation history occurred on 11 September 2001, when terrorists hijacked United Airlines and American Airlines flights and crashed two aircraft into the World Trade Centre’s twin towers in New York and a third into the Pentagon. Nearly 3,000 people were killed. The attacks had a dramatic impact on the airline industry, suppressing demand for airline travel for several years 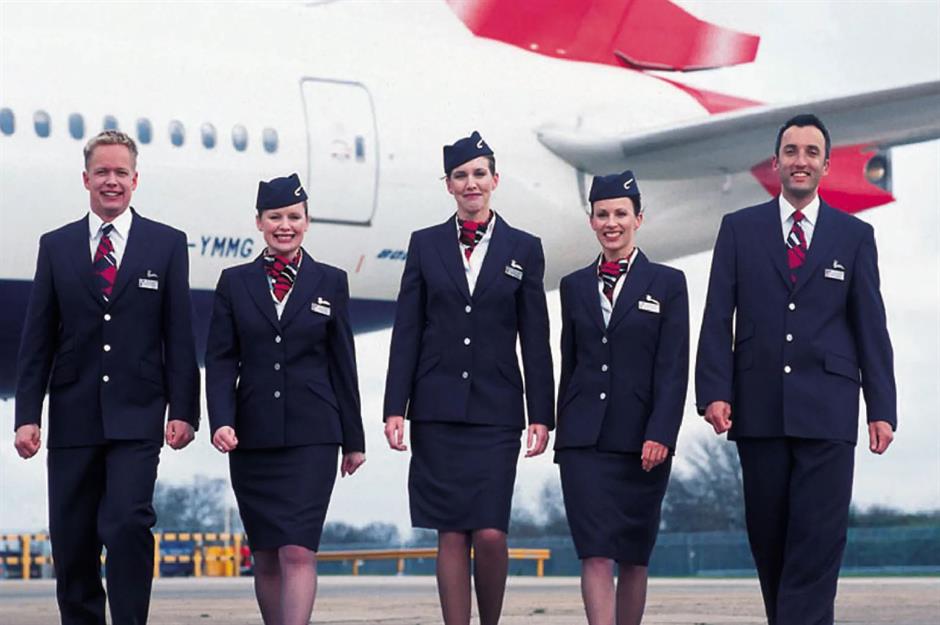 In the aftermath, BA struggled to return to profitability. This prompted a major package of measures to deliver £650 million of annualised cost savings. The intense target included 5,800 extra job losses on top of the 7,200 previously announced, as well as a ‘significant restructuring’ of its short-haul business to compete with its budget rivals who were building a new market. 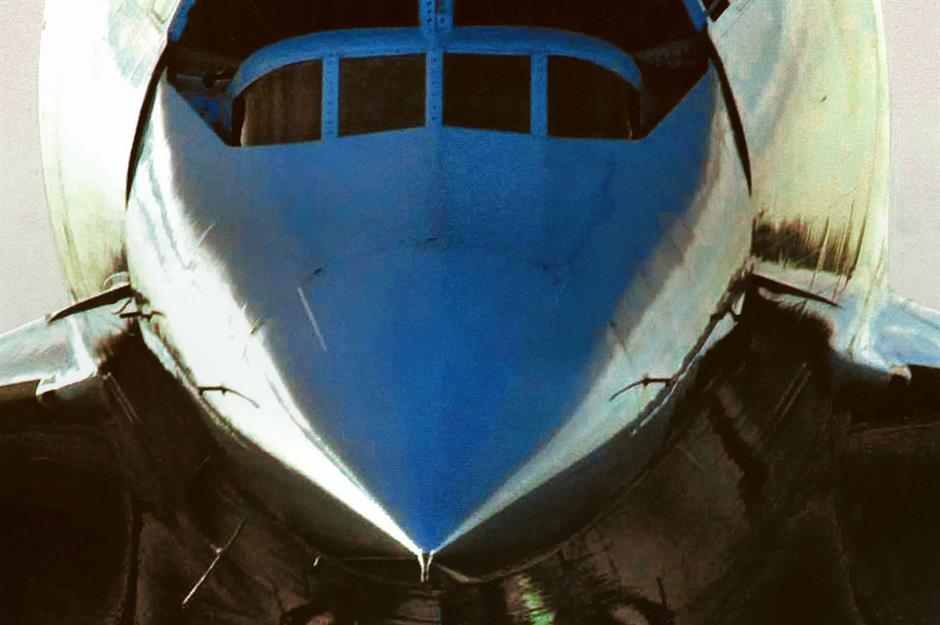 Courtesy of British Airways
In April 2003, the airline decided to retire its Concorde fleet of seven aircraft – the world’s only supersonic passenger service – from the end of October. Demand had dropped following the terrorist attacks on 11 September 2001 and the Air France accident in 2000. 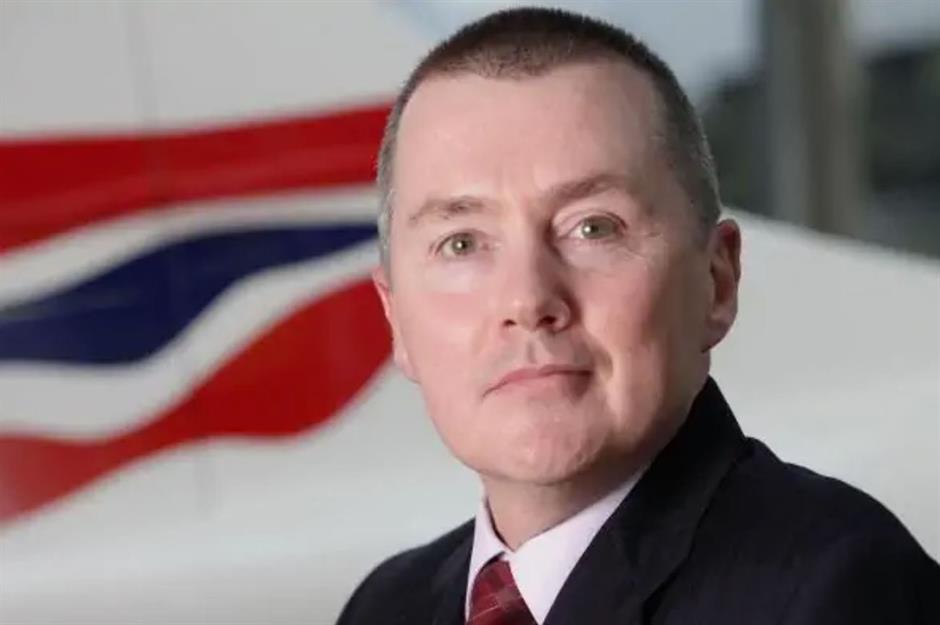 Courtesy of British Airways
Willie Walsh (pictured), former CEO of Aer Lingus, joined BA as its new Chief Executive Designate in May 2005. Rod Eddington subsequently announced his retirement at the end of September and Walsh took over fully. 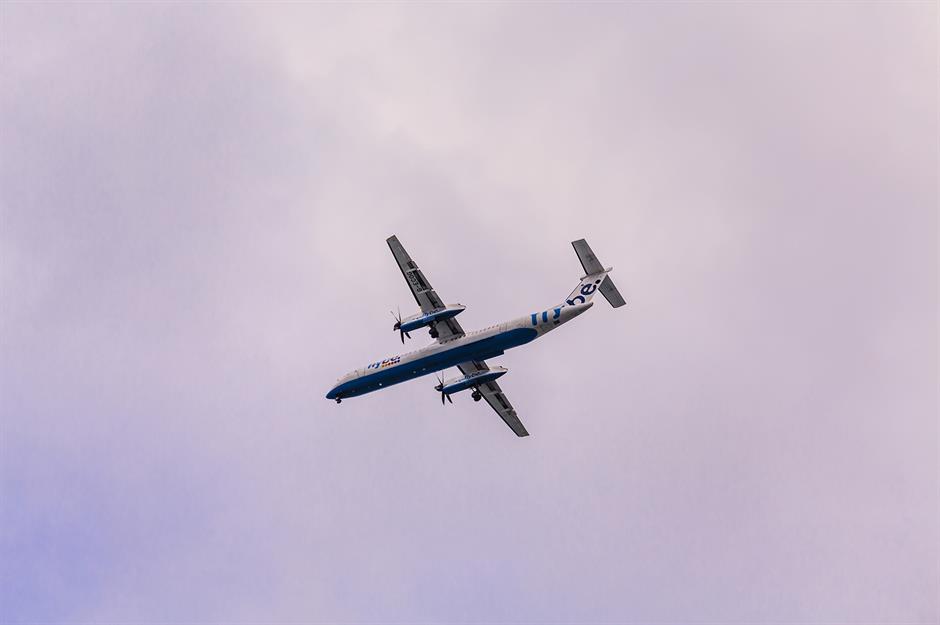 Courtesy of Shutterstock/Darryl Brooks
BA reached a deal with trade unions in July 2006 to merge long-haul and short-haul cabin crew at Gatwick into a single group to operate all flights, achieving a forecast saving of over £13 million. In November, the airline agreed to sell BA Connect (previously CitiExpress) to Flybe for approximately £130 million and a 15% stake in the group. 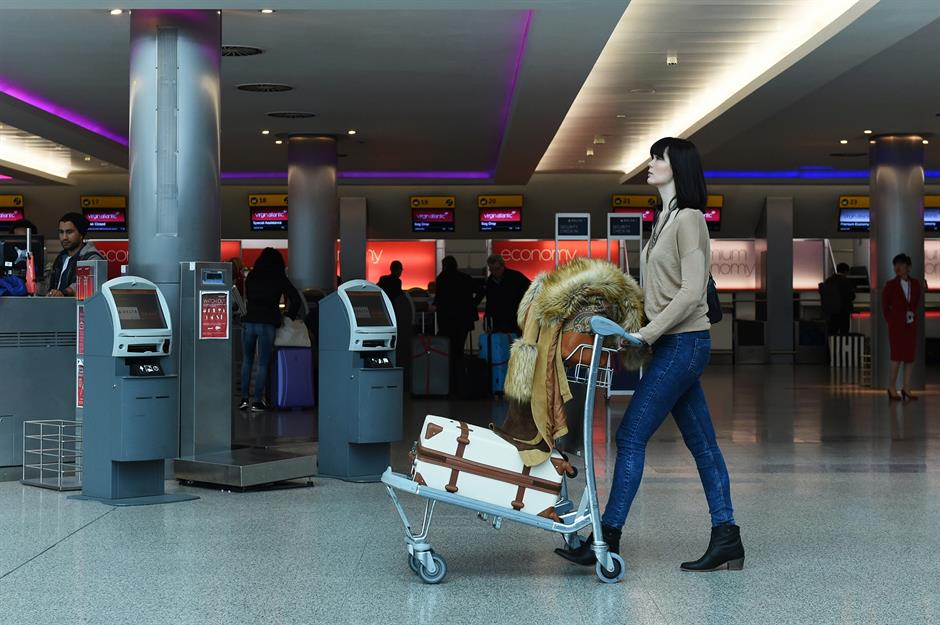 Courtesy of Shutterstock/1000 Words
A security alert at Terminal 4 at London Heathrow in July 2007 led to nearly 200 cancelled flights. This was caused by a suspicious bag, resulting in the evacuation of the terminal amid the UK’s ‘critical’ terrorist threat level. There was more bad news after the airline was fined approximately £270 million for breaching competition laws. 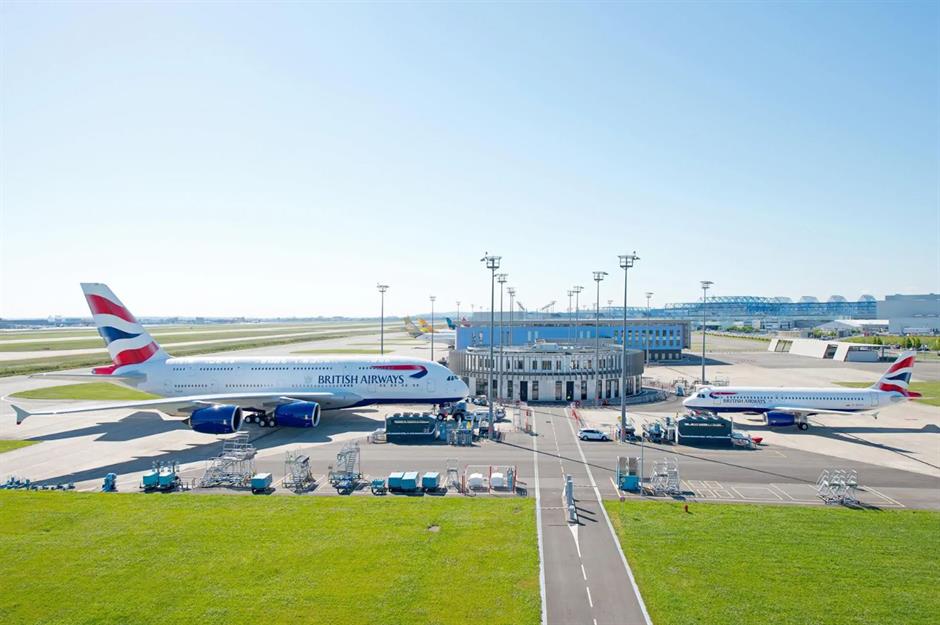 Courtesy of British Airways
In November 2008, a major review was launched to help BA deal with “unprecedented conditions” crippling the industry, as operating profit tumbled 75% to £140m in only six months. Two months later, Walsh outlined plans to combat the deepening global financial crisis, claiming the situation facing the airline was a “chronic crisis.” Workers threatened strike action over the Christmas period in 2009 and eventually went on strike throughout 2010. 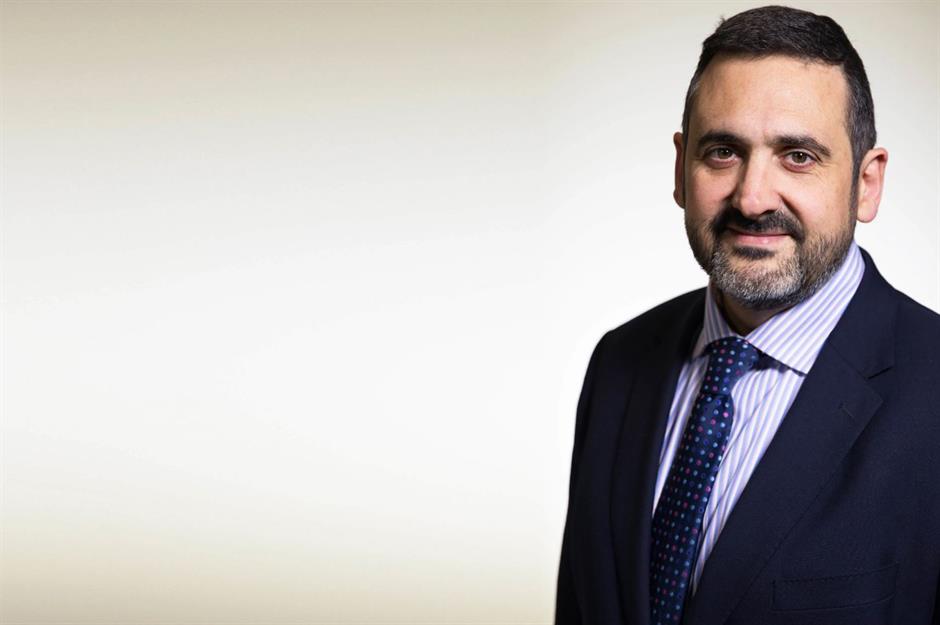 Courtesy of British Airways
Spanish low-cost carrier Vueling became part of IAG in 2013 but remained a standalone company within the group, with Chief Executive Alex Cruz (pictured) reporting to Walsh. Cruz would later be appointed Chief Executive of BA in 2016. 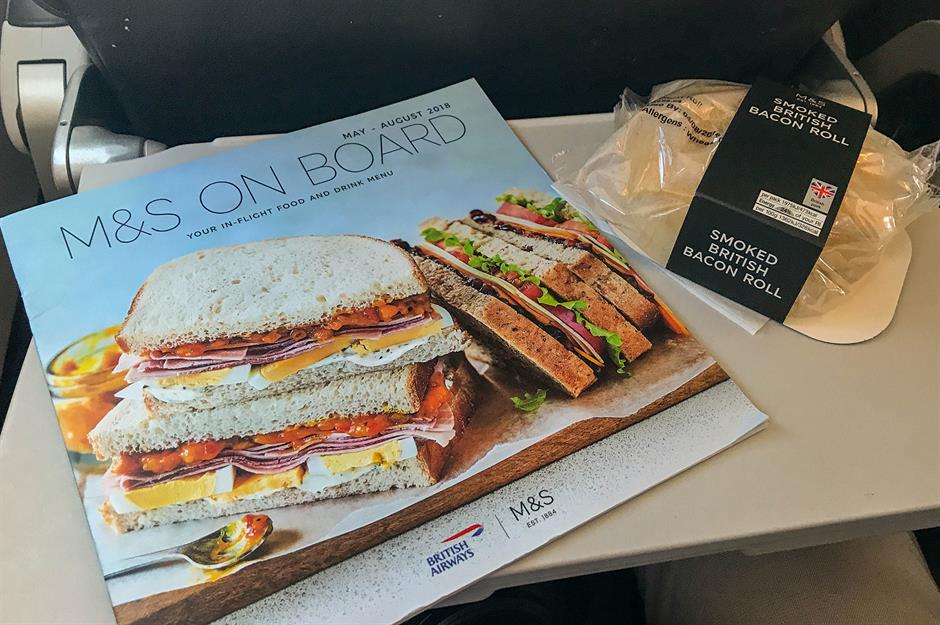 Courtesy of Shutterstock/Ceri Breeze
BA kicked off 2017 by withdrawing free food and drink on short-haul services for economy passengers, allowing them instead to buy M&S products. Chief Executive Alex Cruz said: “Like British Airways, Marks & Spencer is a well-known, premium British brand that is respected and trusted, so it’s an ideal partnership, providing our customers with a choice of products they recognise and value.” The move did not go down well with the public, with the airline widely criticised.

IT meltdown costs 10s of millions 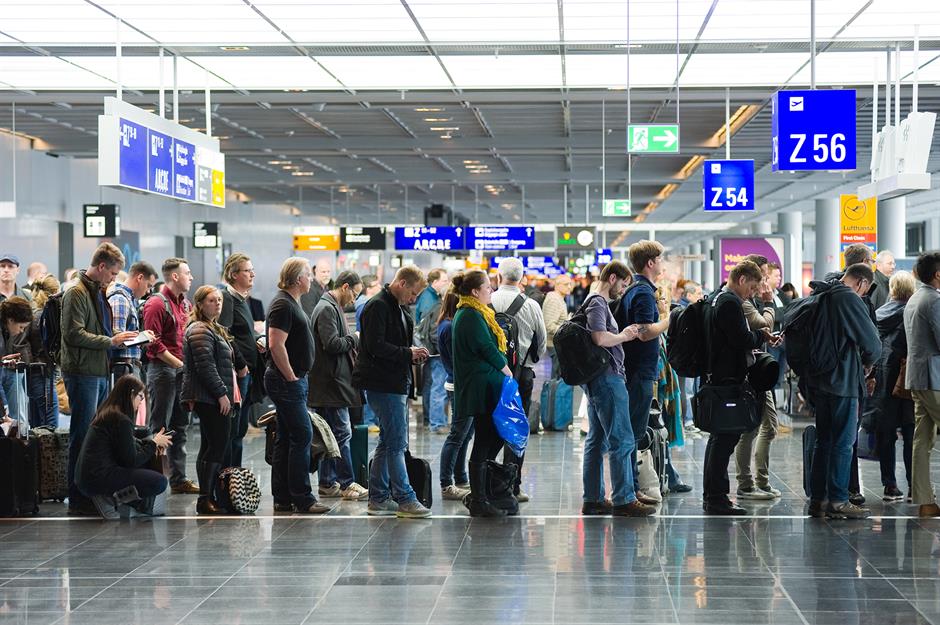 Thousands of BA customers were left stranded over the busy second May bank holiday weekend in 2017 following an IT meltdown reportedly caused by a worker mistakenly turning off a power supply, leading to mass flight cancellations, which was estimated to cost the company £80 million in compensation. Chief Executive Alex Cruz told Sky News at the time: “On Saturday morning at around 9.30am, there was a power surge that had a catastrophic effect over some communications hardware, which eventually affected all the messaging across our systems.” 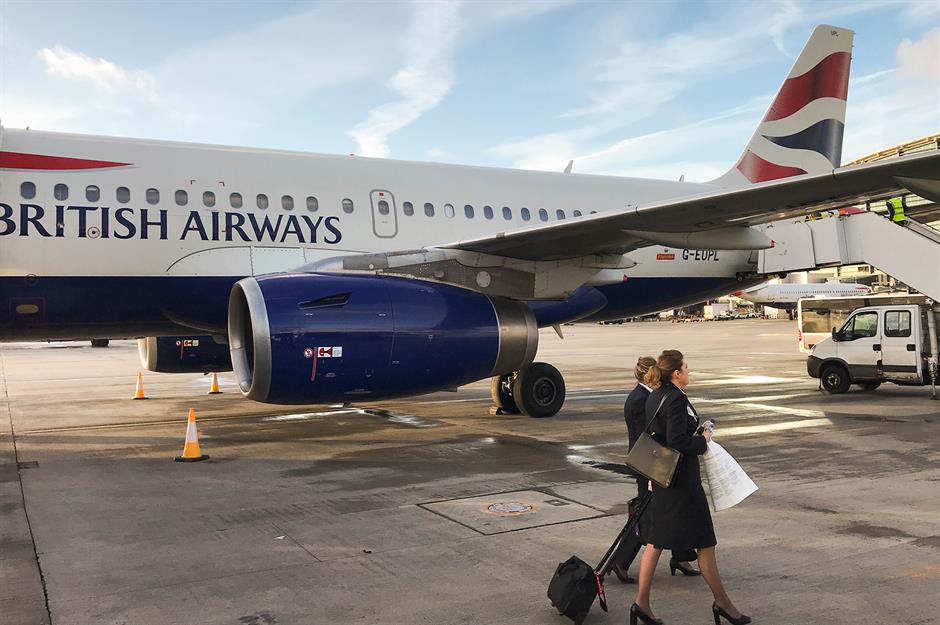 Courtesy of Shutterstock/Ceri Breeze
BA continued to struggle as many of its cabin crew went on strike for several weeks following a pay dispute between the airline and its mixed fleet crew in August 2017. 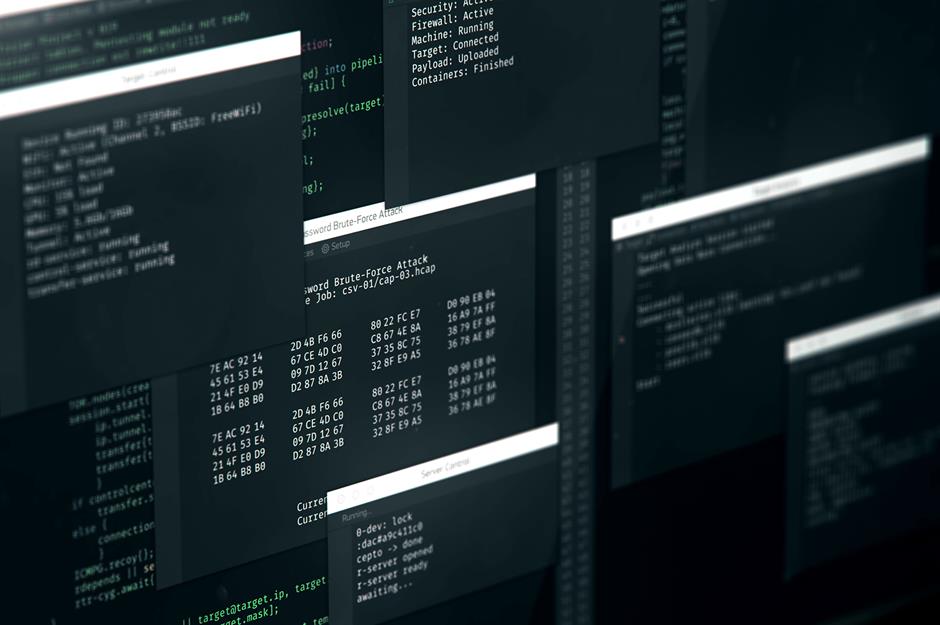 Courtesy of Shutterstock/SynthEx
BA suffered a breach of its security systems in September 2018, with approximately 500,000 transactions affected, and was hit with a record fine of £183 million by the Information Commissioner's Office in July as a result. At the time the breach was revealed, BA said: “We are very sorry this criminal activity has occurred. We’ll reimburse customers who have suffered financial losses as a direct result of the theft of their payment card details.” 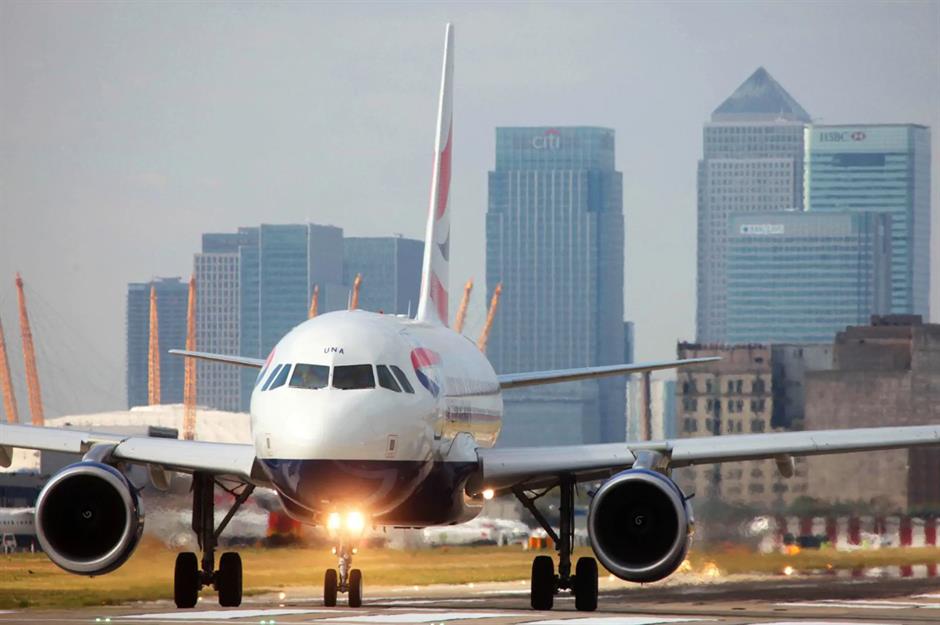 Courtesy of British Airways
Despite the IT meltdown, data breach, higher fuel costs and volatile currency movements, International Airlines Group enjoyed a 42.2% jump in pre-tax profit to £2.46 billion in 2018. But the share price was knocked, falling 5% over the year. 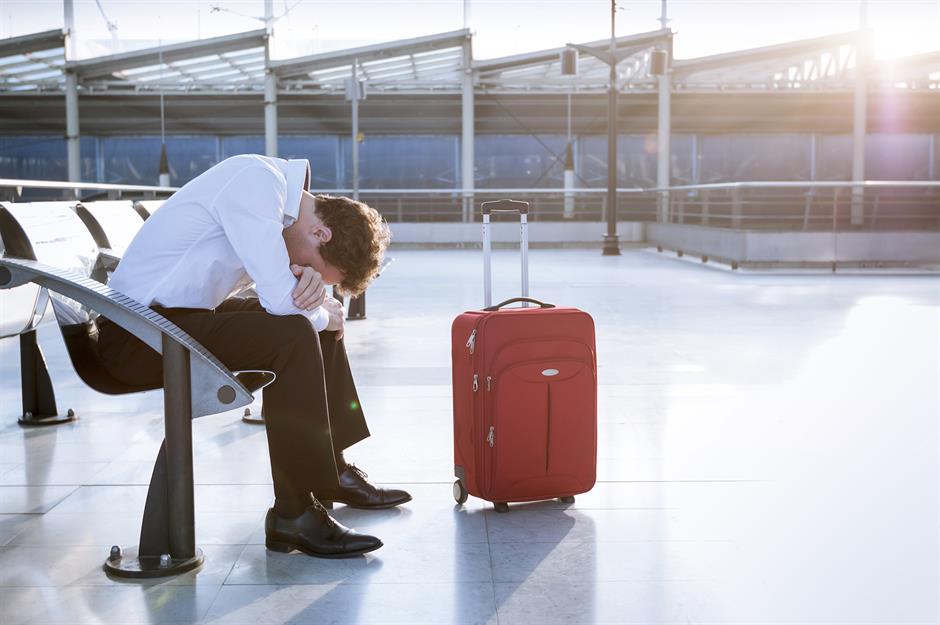 In its most recent blunder, BA dominated headlines in August after emails incorrectly told some passengers their flights were cancelled during staff strikes – and advised rebooking. A spokesman for the airline said: “We are sorry for any confusion and inconvenience this has caused.” As of 4 September 2019, IAG’s share price is near a three-year low. After a disastrous 2019, passengers and investors will hope the only way is up. 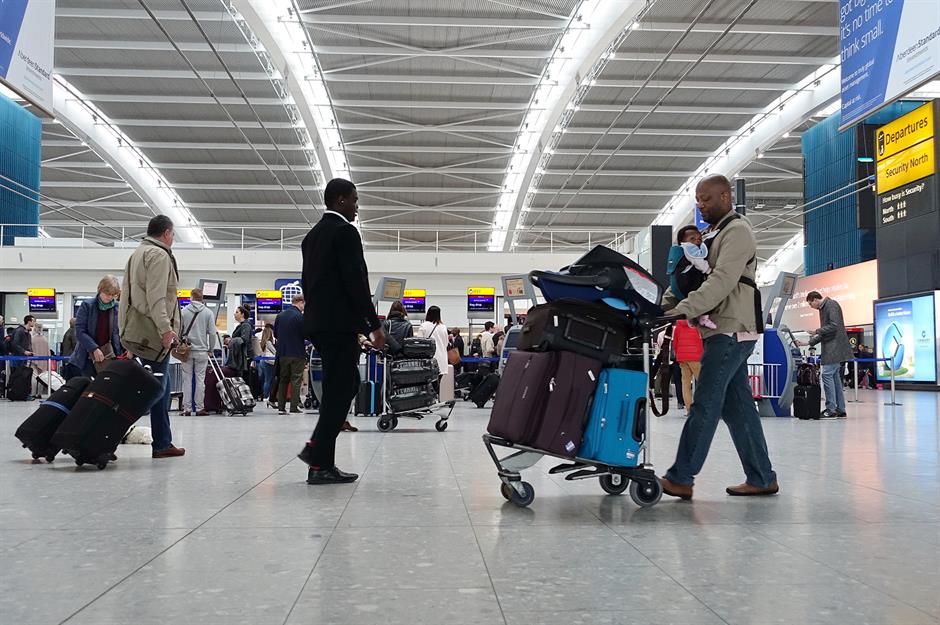 The constant negative headlines have dramatically hit the airline's public image. In Which?’s annual survey of the best and worst brands for customer service, published in September 2019, BA ranked 83rd, with Ryanair the only airline scoring lower. BA also featured near the bottom of Alva’s recent Airline Reputation Index, coming in at number 55 out of 65 global airlines. After a fairly disastrous 2019, passengers and investors alike will hope the only way is up.