Stolen treasures countries want other countries to give back

James Miles [CC BY-SA 4.0 (https://creativecommons.org/licenses/by-sa/4.0)]
Many countries are now returning artefacts to the countries they were taken from. But there are still dozens of ongoing international disputes over diamonds, weapons and other historic items that countries say were stolen. Read on to see some of the most high-profile cases. All dollar amounts in US dollars. 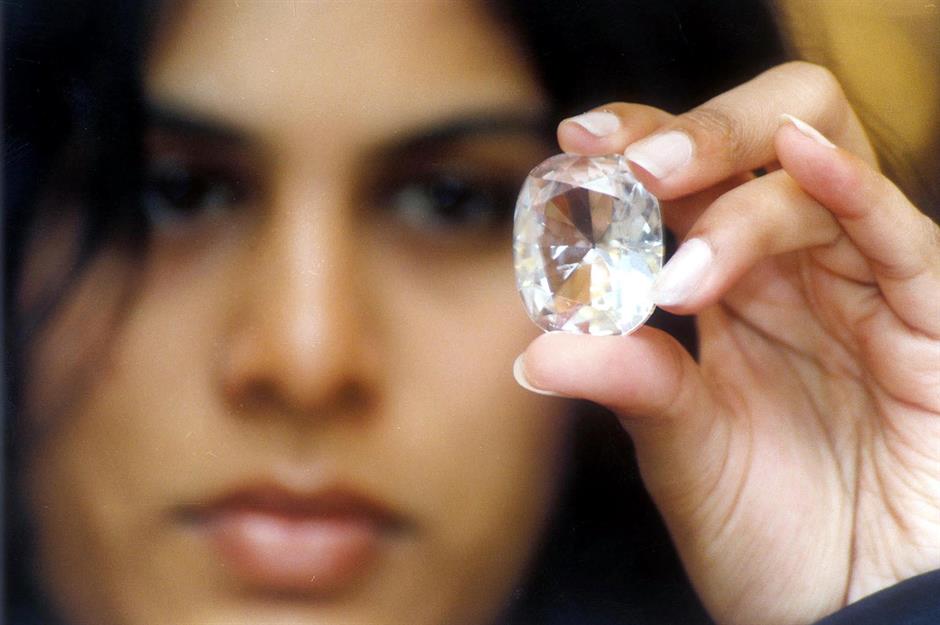 Legend puts the 105-carat Koh-i-Noor diamond at more than 5,000 years old. It is believed to have been mined in India in the 1300s and once weighed 793 carats. It was presented to Queen Victoria, then Empress of India, in 1850, whose husband Prince Albert had the gem recut and polished, which reduced its size by about half. The gem is now in the Tower of London as part of the British Crown Jewels despite the fact that India has demanded its return since independence in 1947. Its exact value is unknown but the Graff Pink diamond, a quarter of its size, was sold in 2010 for $46 million (£35m). 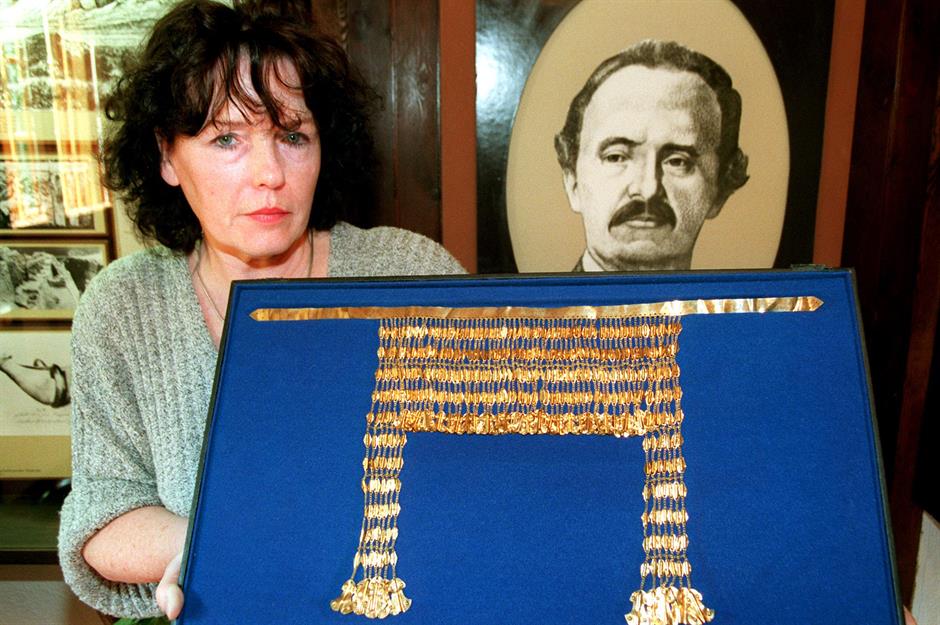 Archaeologist Heinrich Schliemann discovered a cache of treasure in Anatolia, Turkey in 1837 and smuggled it to Berlin. It included a pair of gold diadems, almost 8,750 gold rings, copper shields and weapons. He named it for a king of Troy – and had his wife photographed in the jewellery, which brought his theft to light. But the Russians then looted the treasure, which had been hidden by the Germans under Berlin Zoo, during World War II. Now in Moscow’s Pushkin Museum, Germany is still calling for its return, despite its dubious provenance. 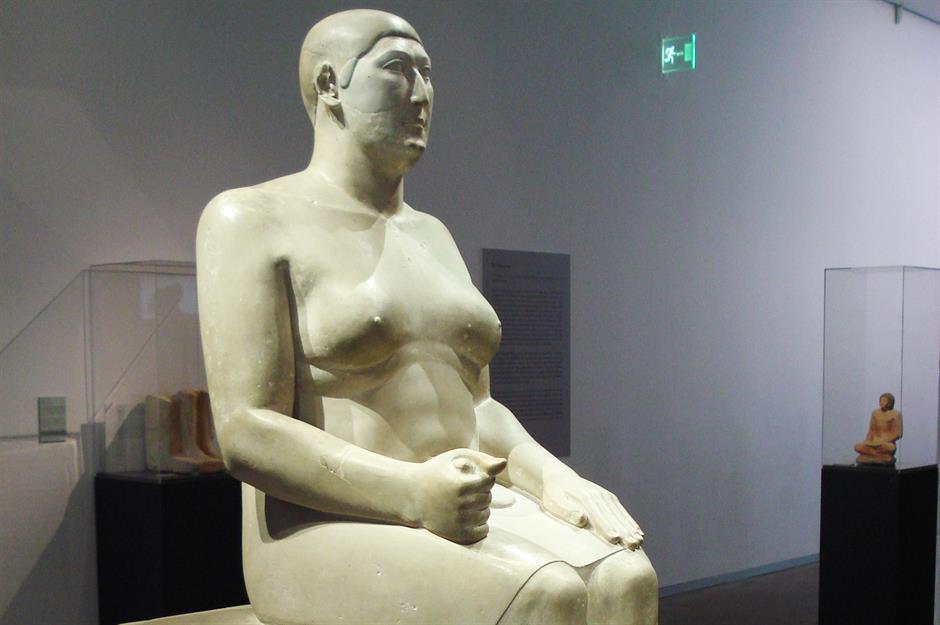 The seated statue of Hemiunu, believed to be the architect of the Great Pyramid of Giza, was found in his tomb by a German archaeologist in 1912. Its jewel-inlaid eyes had been gouged out by ancient robbers. It can be found at the Roemer and Pelizaeus Museum in Hildesheim, Germany and is one of several artefacts that Egyptian archaeologist Zahi Hawass, the country’s former antiquities minister, has demanded be returned on moral grounds – even though he admits it was legally transferred. 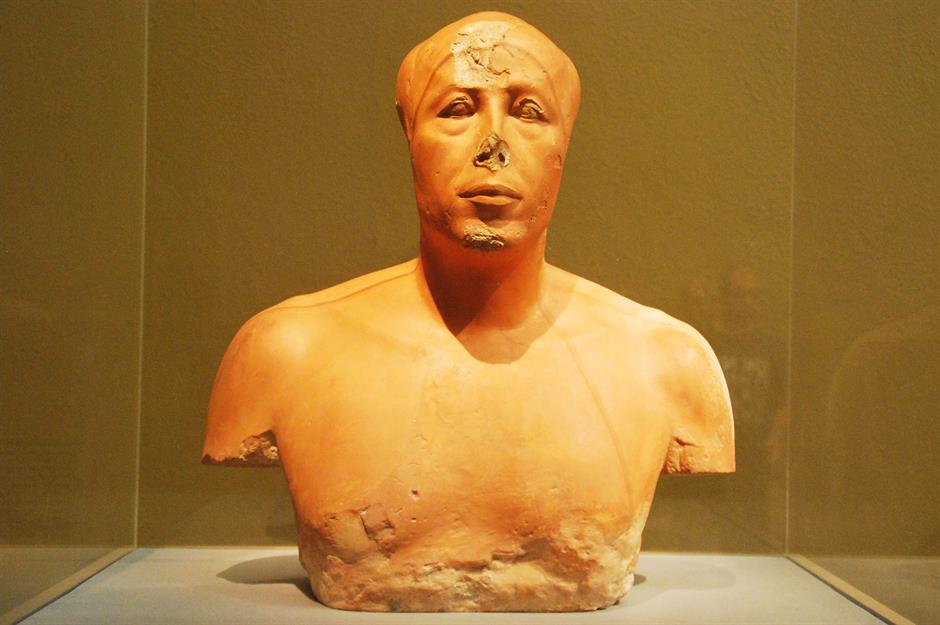 Marcus Cyron [CC BY 3.0 (https://creativecommons.org/licenses/by/3.0)]
In 2011, Egypt also demanded the return of the bust of pyramid builder Ankhhaf, kept in Boston's Museum of Art since 1927 – but was rebuffed. It is on Hawass’ hit list of Egyptian antiquities for a planned (and much-delayed) Grand Egyptian Museum. But the Boston Museum says the 4,500-year-old statue, made of limestone covered with a thin layer of plaster, is too fragile to travel, even for a loan.

Michael Sohn/ DPA/ PA Images
In 2011 Germany rejected an Egyptian request, repeatedly and more vehemently made since 1930, to return the 3,400-year-old, 20kg bust of Queen Nefertiti. The striking bust brings a million visitors a year to Berlin's Neues Museum and Germany calls it “the ambassador of Egypt in Berlin”. Cairo says it was shipped out in 1913 by a German archaeologist under fraudulent papers.

The Ishtar Gate was built by King Nebuchadnezzar II as an impressive entrance to ancient Babylon (in modern-day Iraq), fashioned from enamelled blue and green bricks and decorated with hundreds of reliefs of dragons and bulls. In 1902 German archaeologists started to unearth it. In 1928 the front part of the gate was rebuilt over a period of two years in the Pergamon Museum in Berlin, where it remains today. Later, Saddam Hussein built a copy of the gate on its foundations. In 2002 Iraq requested its return, but its calls have so far been ignored.

Between 1801 and 1805 Lord Elgin, British ambassador to the Ottoman Empire, stripped Athens’ Parthenon temple of many marble sculptures, and later sold them to the British government for £35,000 ($4 million/£3 million today). On show at the British Museum ever since, Greece has petitioned for their return since the 1980s, claiming that Lord Elgin bribed the Ottoman occupiers. The British Museum, which is involved in several international disputes, says Elgin was an official diplomat acting with permission.

Since 2003 Turkey has also been seeking the restitution of the monumental Pergamon Altar from Germany. Built in the reign of king Eumenes II in the ancient Greek city of Pergamon, the friezes of the nearly 36m-wide altar were brought to Germany in the late 19th century and the altar reconstructed, to become the centrepiece of the Pergamon Museum in Berlin. Germany says they were purchased for 20,000 goldmarks and legally exported.

For decades, Cairo has demanded the return of the famed Rosetta Stone from (again) the British Museum, renewing its demands in 2018. The 2,200-year-old tablet is made of granodiorite and is engraved with a message written in Ancient Greek, Demotic and Egyptian hieroglyphics, which allowed 19th-century scholars, who could still read Ancient Greek, to translate hieroglyphics for the first time. It was discovered during French colonial rule in 1799 and taken from the French by the British during the Napoleonic Wars in 1801. 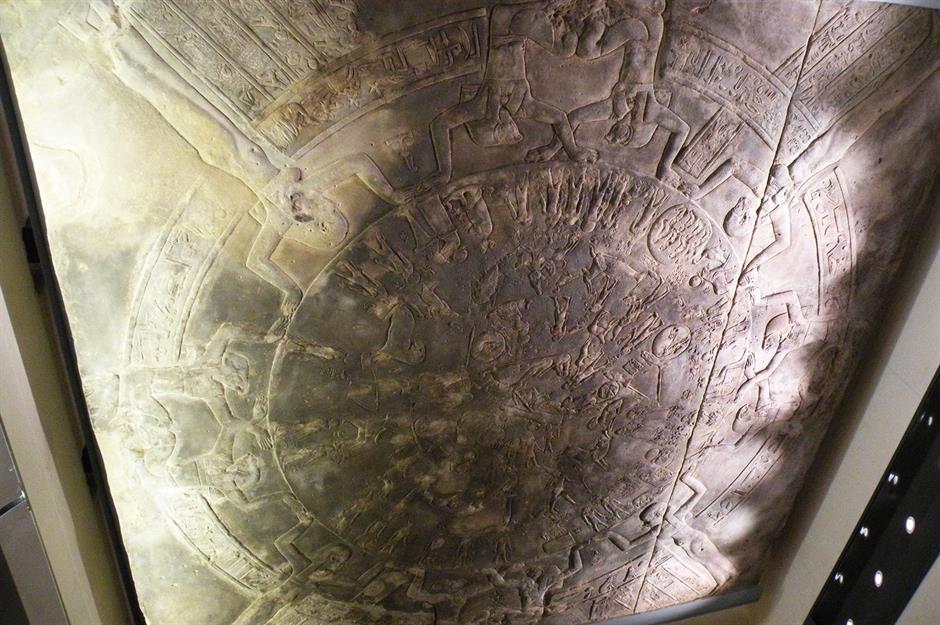 Chatsam [CC BY-SA 3.0 (https://creativecommons.org/licenses/by-sa/3.0)]
The Dendera Zodiac, a ceiling relief containing ancient Egyptian pictures of the first Zodiac signs, was blown out of the temple in which it was discovered with explosives and taken to France in 1821. It is now in the ceiling of the Egyptian Antiquities exhibit at the Louvre Museum in Paris. It is one of the artefacts Hawass has been fighting for. 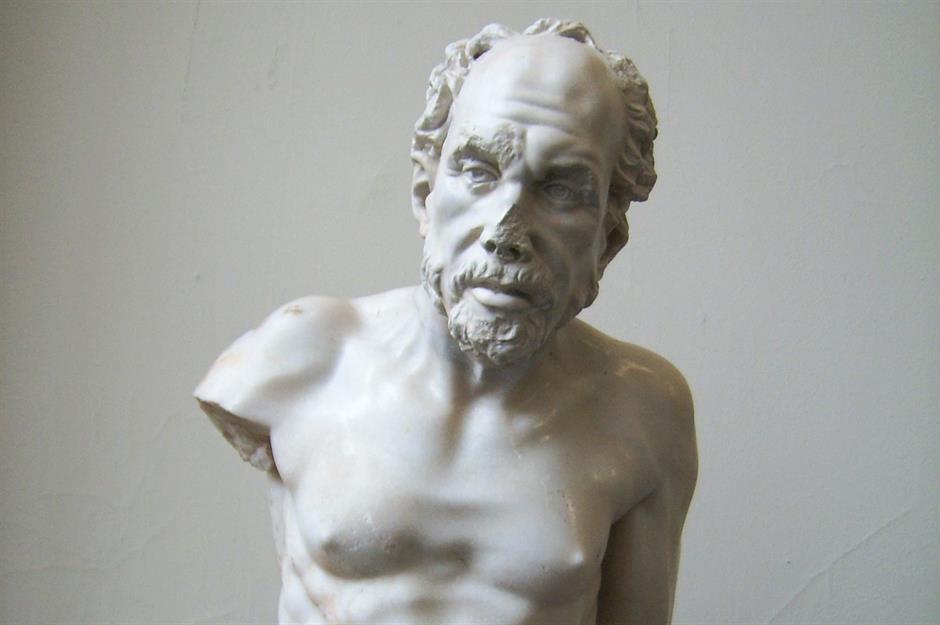 Since 2012, Turkey has pursued Berlin’s Altes Museum for the return of the 2,000-year-old marble statue Old Fisherman from Aphrodisias. The torso was found in an excavation of the Aphrodisias public baths in 1904, while the head is a plaster cast of the original, discovered separately in 1989. Germany says its purchase of the torso from an art market in 1905 was “absolutely legal”, it can prove it and sees “no reason at all” to return it. 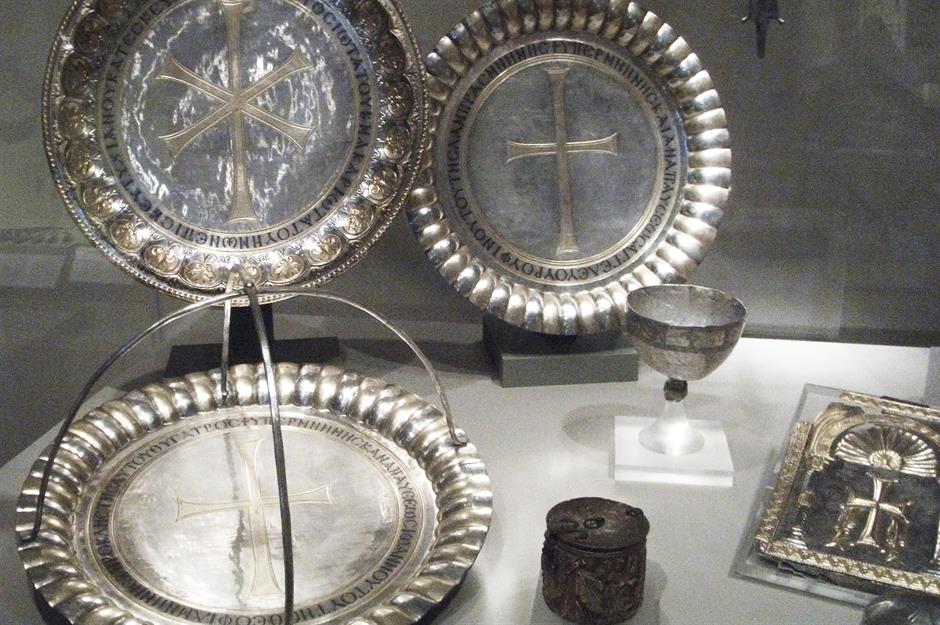 In recent years Turkey has renewed demands for many relics to be returned, including a large portion of the Sion Treasure on display at Washington DC’s Dumbarton Oaks Institute Museum. It includes dishes, crosses and candelabras found in Antalya province in 1963. An American collector bought the treasures for $1 million (£759k) and gave it to the museum in 1967. Other pieces are in a museum in Antalya, Turkey, including the upper part of a statue of Hercules returned by the Boston Museum of Fine Arts.

In 2018 the governor of Easter Island pleaded with the British Museum to return Hoa Hakananai’a, one of the Pacific island’s moai spiritual stone statues. They were carved as representations of the spirits of ancestors from around AD 1000 until about 1650. “You have our soul,” the governor told the unrelenting museum, which has held onto the statue for 150 years. The following year a delegation went to Easter Island to discuss the preservation of 1,000 other statues that remain on the island, but islanders used the opportunity to also ask for the return of Hoa Hakananai’a, a four-tonne, eight-foot lava monolith, that was taken in 1868 by a British frigate and given to Queen Victoria. 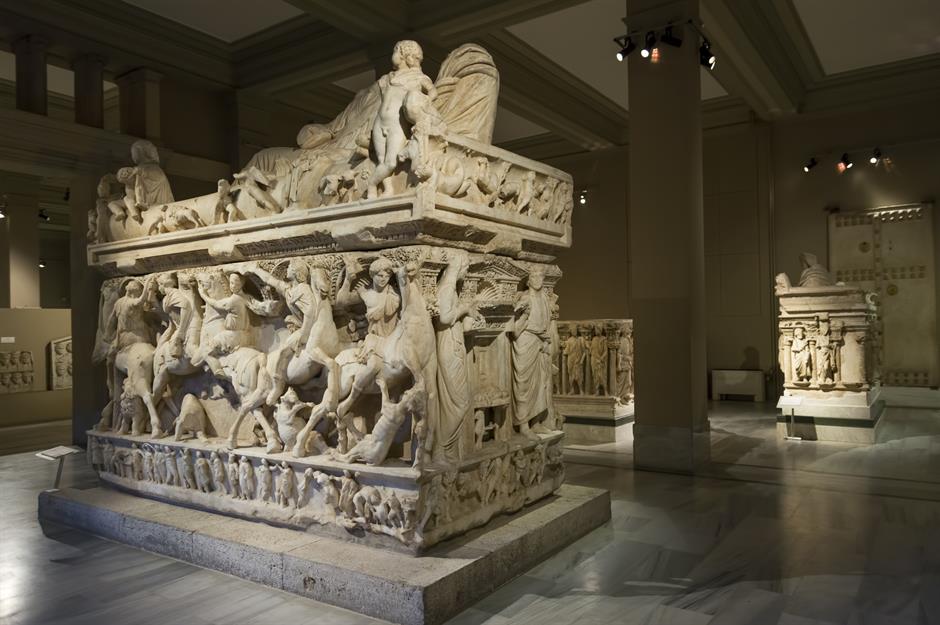 The Sidamara Sarcophagus was discovered by British archaeologist Sir Charles Wilson in 1882 in Turkey. He took a life-sized marble head of a child – later donated by his family to London’s Victoria & Albert (V&A) Museum – and was thought to have been planning to come back for the sarcophagus, now at Istanbul's Museum of Archaeology (pictured). In 2014 the V&A said it was willing to send the head back to Turkey on a long-term loan, but an agreement has not yet been reached.

Stunning treasures discovered in the most unlikely places 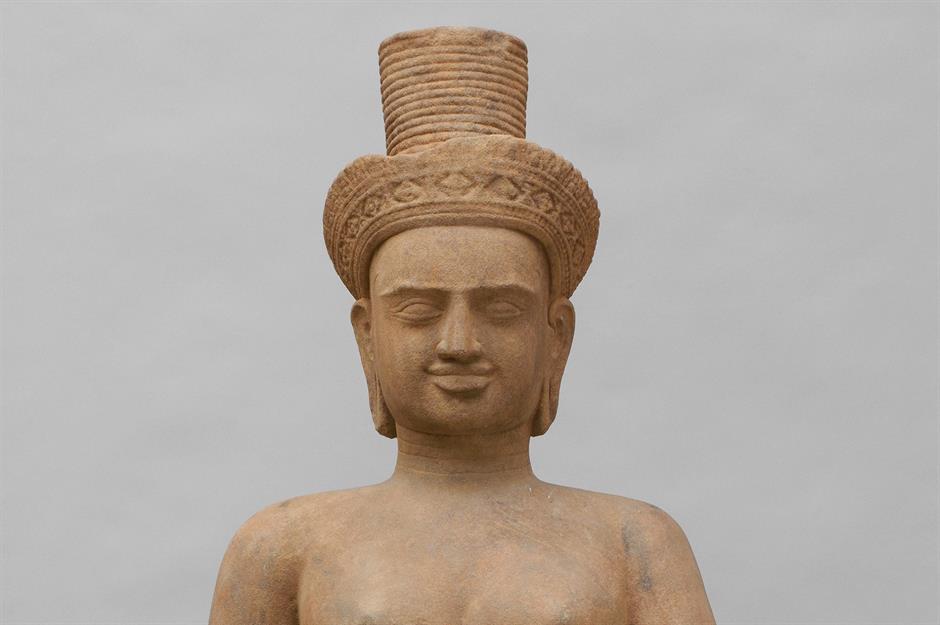 In November 2021, the government of Cambodia began calling for the Metropolitan Museum of Art in New York to review the Khmer Empire antiquities in its collection. The government has identified 45 items in the museum that are "highly significant" to Cambodia and were stolen between 1970 and 2000. According to information leaked in the Pandora Papers in October 2021, 12 of these artefacts are linked to offshore accounts that belonged to the disgraced art smuggler Douglas Latchford. The Met has said that it's "happy to cooperate with any inquiry" from the Cambodian government. 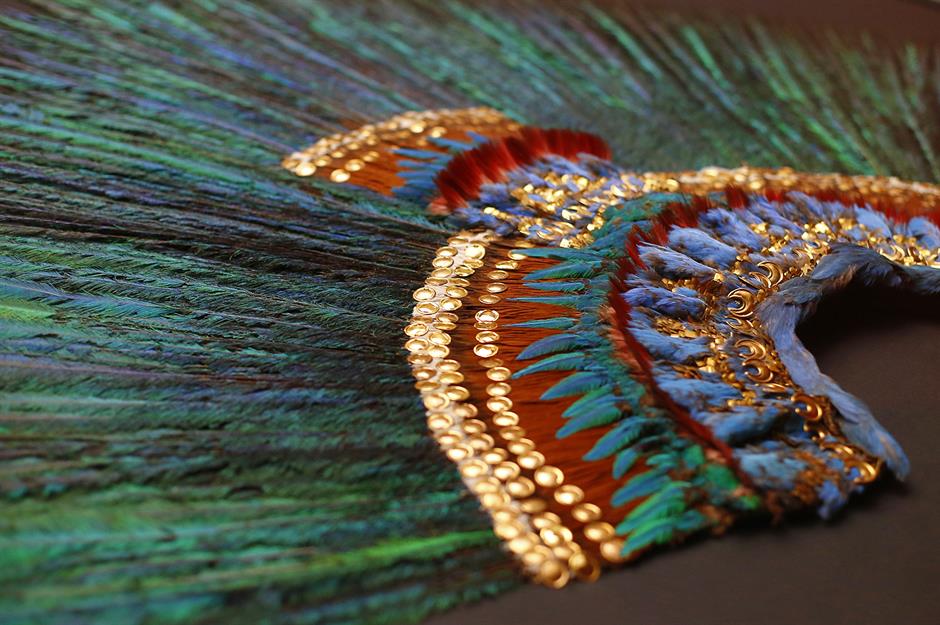 ALEXANDER KLEIN/ AFP/ Getty Images
In 1991 a formal request by the Mexican government for the return of an Aztec headdress from Austria was denied. The one-of-a-kind headdress is made from 500 tail plumes of the colourful quetzal bird and kept at Vienna’s Museum of Ethnology. It is thought to have been brought to Europe by a Spanish conquistador in the mid-16th century. A study commissioned by the Austrian government claimed its safe return was impossible due to the airplane’s vibrations in flight. 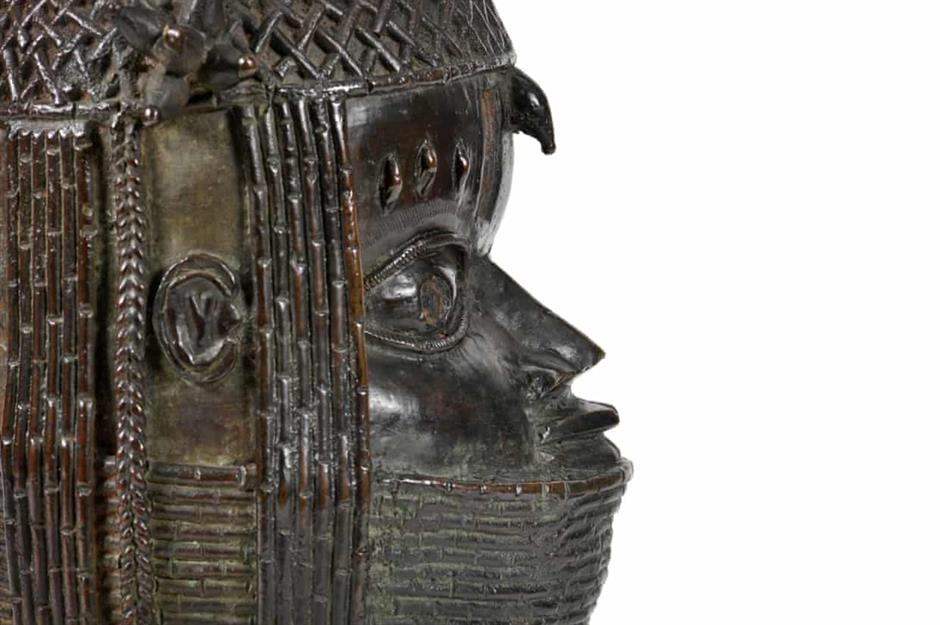 The recent return of some of the so-called 'Benin Bronzes' sculptures to Nigeria, from where they had been looted in the 19th century, by the UK's University of Aberdeen, Berlin's Ethnological Museum, and Jesus College, Cambridge has put great pressure on London's British Museum and Oxford's Pitt Rivers Museum, both of which still house them. In fact, the British Museum has the single largest collection of Benin Bronzes. After many requests the British Museum sold 30 of the artefacts back to the Nigerian government between 1950 and 1972, and more recently both museums have engaged in talks about Nigeria's looted treasure. That said, to date they have only agreed to hand over the stolen treasures as part of rotating loans.

Some people who inherited bronzes have also returned theirs to Nigeria, while others have capitalised on the interest in them and sold theirs for up to $13.7 million (£10m) at auction. 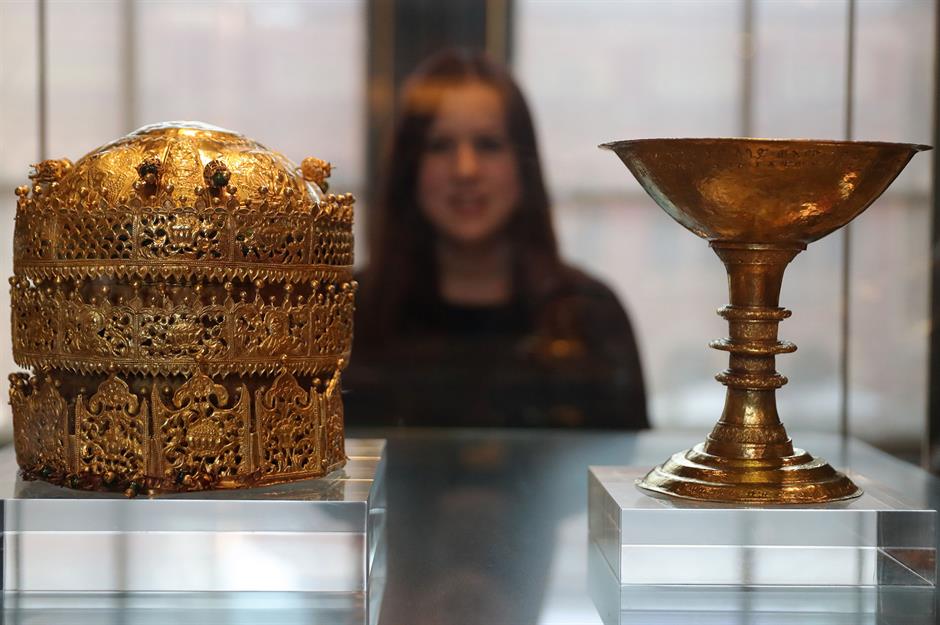 In 2018 Ethiopia demanded the return of artefacts taken by the British Army in 1868 Abyssinia, as they went into a new exhibit, Maqdala 1868, at the Victoria & Albert Museum in London. They include a royal gold crown once owned by Ethiopian Emperor Tewodros II, a wedding dress and a gold chalice that made by by Walda Giyorgis in Gondar. Ethiopia’s restitution claim in 2007 was refused but the museum has now offered them on long-term loan. The Ethiopian Embassy says that this is a "step in the right direction". 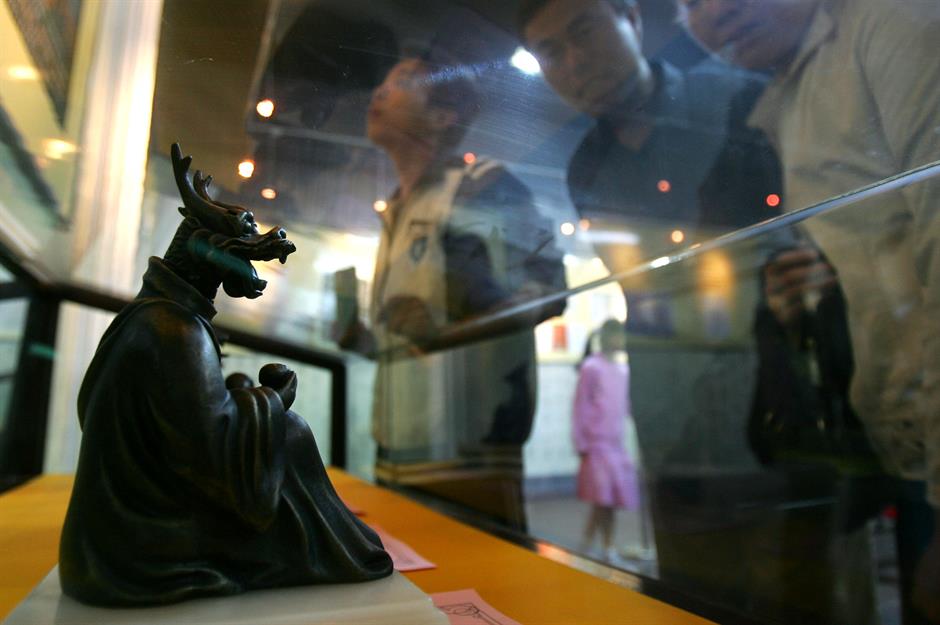 China has long demanded the return of up to 1.6 million antiquities, looted by French and British troops in 1860 from the Old Summer Palace, built in 1750. The British Museum, among others, has been asked to allow Chinese archivists in (there are no palace records) but says that only 15 pieces in its 23,000-strong Chinese collection may be from the palace. The full treasure would have been worth billions today; in 2010, a palace-owned Qing-dynasty porcelain vase sold for $69.5 million (£52.8m).

In 2015, the British Museum loaned the Gwaegal shield to Australia for an exhibition – but a descendant of its owner has since demanded its permanent return. The bark shield was ‘collected’ by British explorer Captain James Cook when he first set foot in Botany Bay, Sydney in 1770. His crew shot a Gwaegal warrior – a hole can be seen in the shield – and upon their return to England gave the shield to the museum. Sixth-generation descendant Rodney Kelly says it belongs to the indigenous tribe. However, recent tests have thrown his claims into question, as some studies have shown that the red mangrove wood used to make the shield didn't grow in Botany Bay in the 1700s.

Now read about some of the world's most valuable stolen treasures