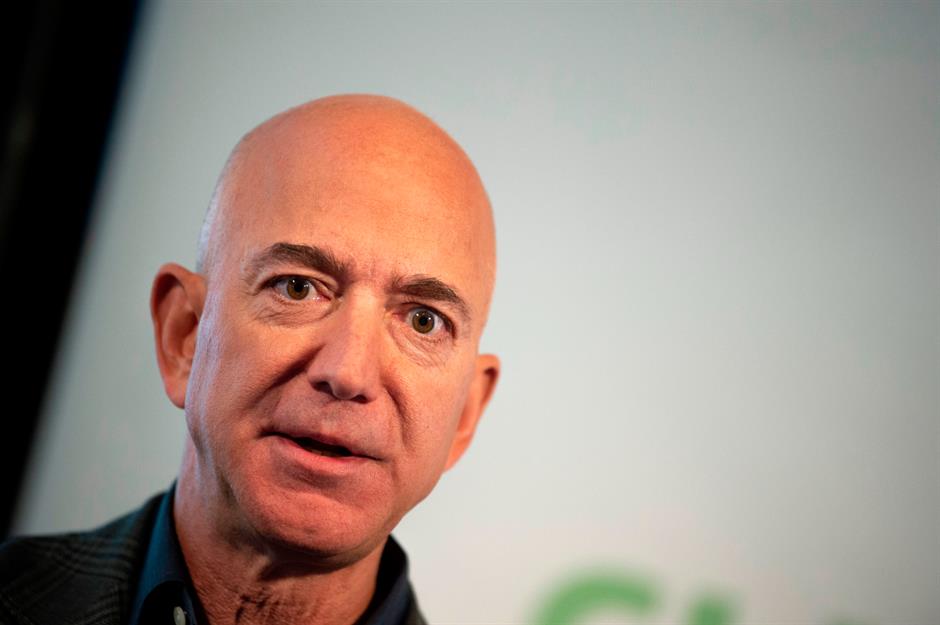 Jeff Bezos has revealed he is in favour of a higher corporation tax rate in America, with President Joe Biden's administration considering an increase, which would be the first rise in more than 25 years if it goes ahead. America's corporate tax is currently 21%, but the White House wants to increase to 28% to pay for the ambitious $2.3 trillion infrastructure plan it has in the works. And it's this plan that Bezos supports, stating: "Both Democrats and Republicans have supported infrastructure in the past, and it's the right time to work together to make this happen. We recognize this investment will require concessions from all sides — both on the specifics of what's included as well as how it gets paid for." This is an unusual opinion to have as it's been revealed that 98% of CEOs in the US actually think the change to corporate tax would have a negative impact, notably on business expansion, according to a survey by Business Roundtable.

Backing from the world's richest person, and the founder of retail giant Amazon, is perhaps surprising considering Biden actually called Amazon out on its use of tax credits in 2019, and even last year said Amazon should "start paying their taxes", to which Amazon replied that it always pays its taxes. However, Bezos' latest comments are reflective of a wider wave of support from some American businesses for Biden's infrastructure package. But how does America's corporate tax rate compare to the lowest company tax rates among 30 OECD countries? Click or scroll through to find out. 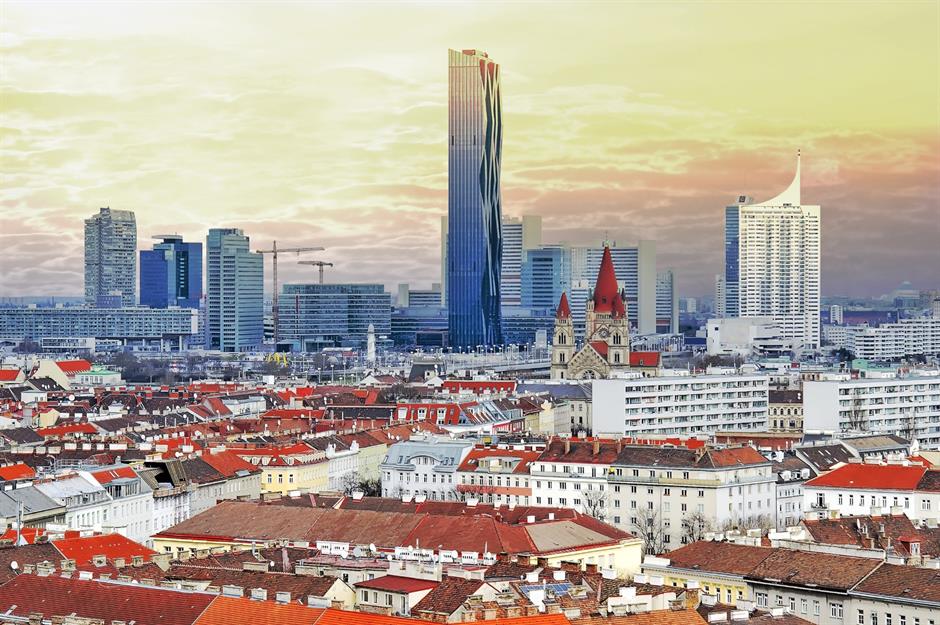 Reidl/Shutterstock
Austria has one of Europe's most pro-business tax regimes. Firms that are headquartered in the country pay a unified rate of 25% and can take full advantage of other incentives, including generous research & development (R&D) tax reliefs. The current Chancellor, Sebastian Kurz, has announced plans for further reducing corporate tax in the country to 23% in 2022, and then down to 21% in 2023. 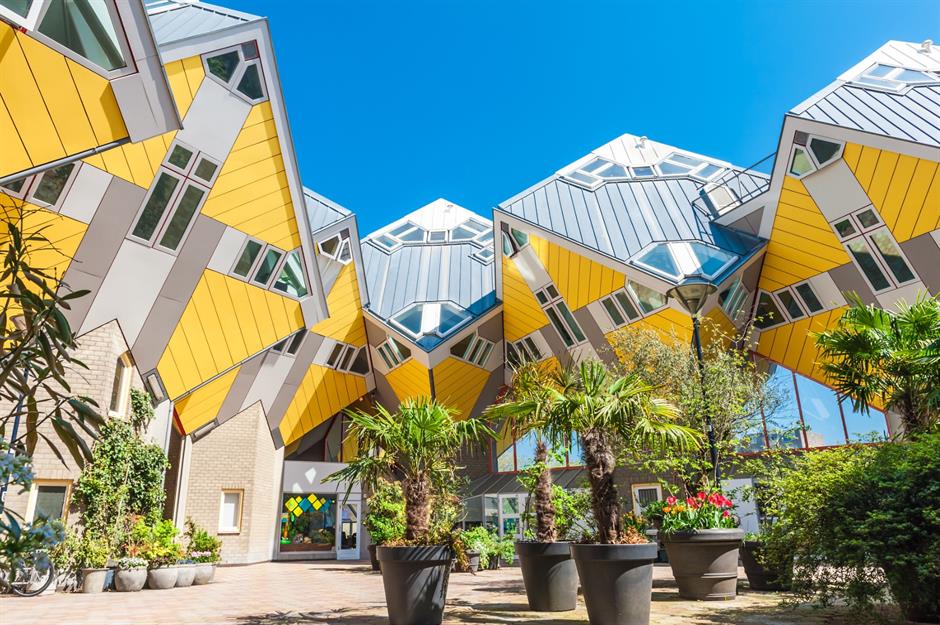 cla78/Shutterstock
In the Netherlands, small businesses are liable for less corporate tax. Firms in the country pay 19% if their annual profits are less than €200,000 ($237k/£183k), and the standard 25% if they generate more. Companies are also rewarded for innovation through additional tax benefits, innovation credits and lavish grants. 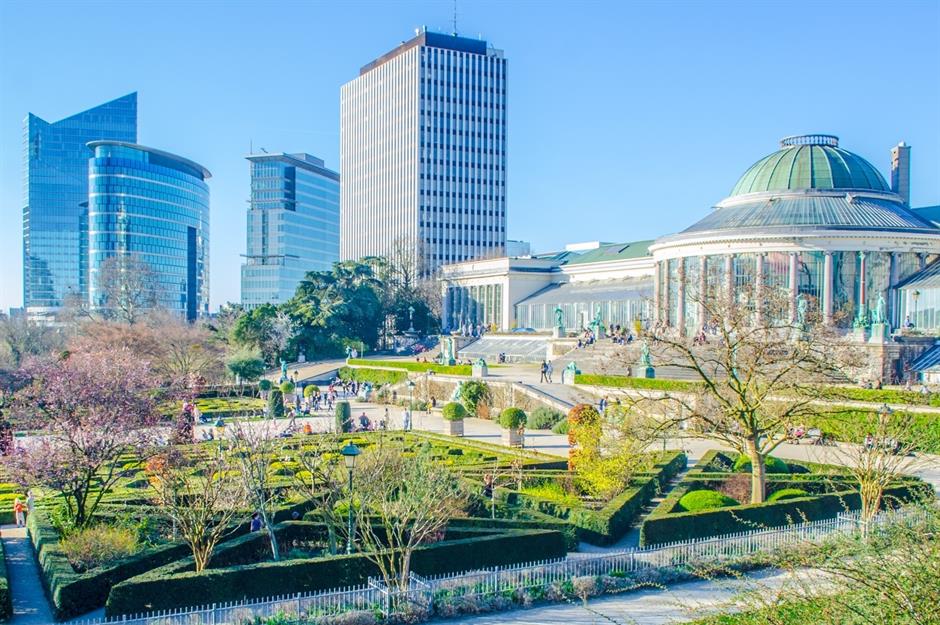 trabantos/Shutterstock
Belgium was one of Europe’s pricier locations when it came to corporate tax, with a rate of 33% before the Belgian Government reduced it down to 29% in 2018. In 2020 the country cut taxes by another 4%, and so its corporate rate currently sits at 25%. The new regulations come with counterbalance measures, such as a minimum taxation on companies making more than €1 million ($1.2m/£913k) in profits. 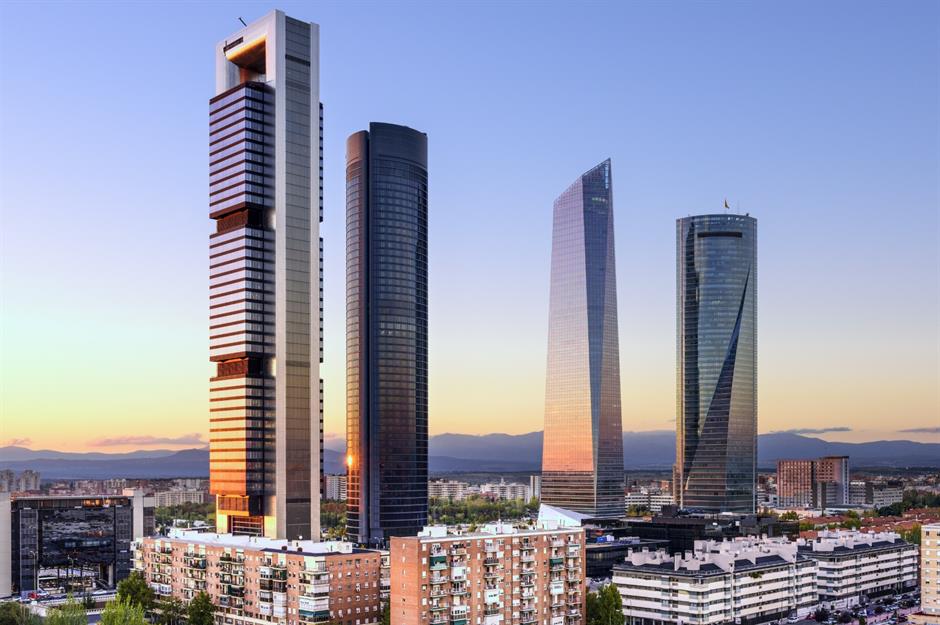 ESB Professional/Shutterstock
Following the financial crash between 2008 and 2014, the Spanish economy made a slow but sure recovery, which can partly be explained by its competitive corporate tax rate of 25%. The tax peaked at 35% during the 2000s, but was lowered to stimulate growth. 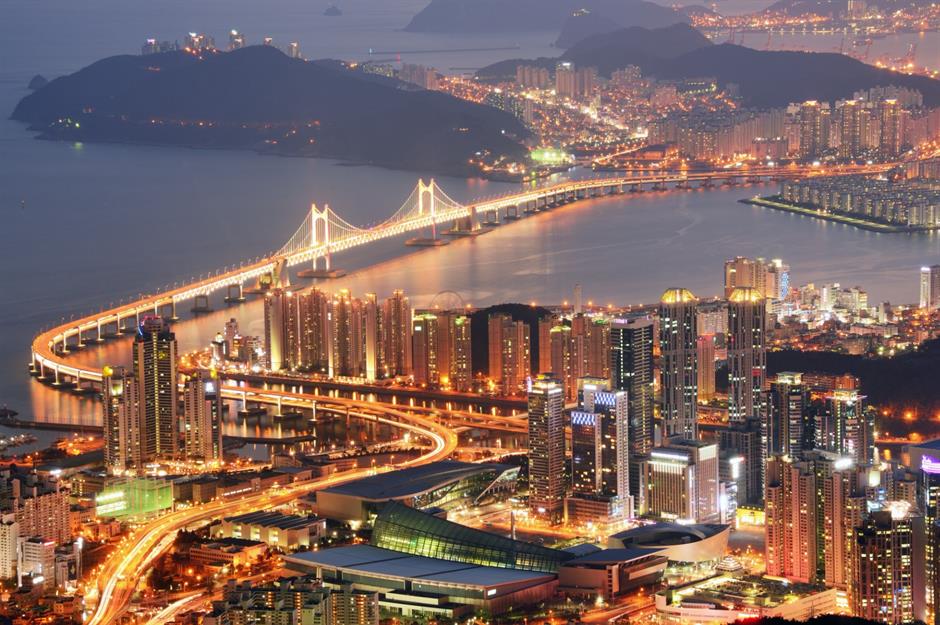 In 2018, the corporate tax rate rose by 3% in South Korea, bringing the standard rate to 25%. The additional money was due to pay for social welfare programmes and new public sector jobs, but the negative impacts were quickly felt elsewhere, with the move causing domestic investment to fall by an incredible 20 trillion won ($17.1bn/£13.1bn) that year.

r.nagy/Shutterstock
Businesses in Italy are obliged to pay a 24% flat rate tax, as well as a 3.9% municipal tax, but all is not what it seems. According to a Congressional Budget Office (CBO) report, many businesses are eligible for rebates and credits that can pretty much cancel out their annual bill. 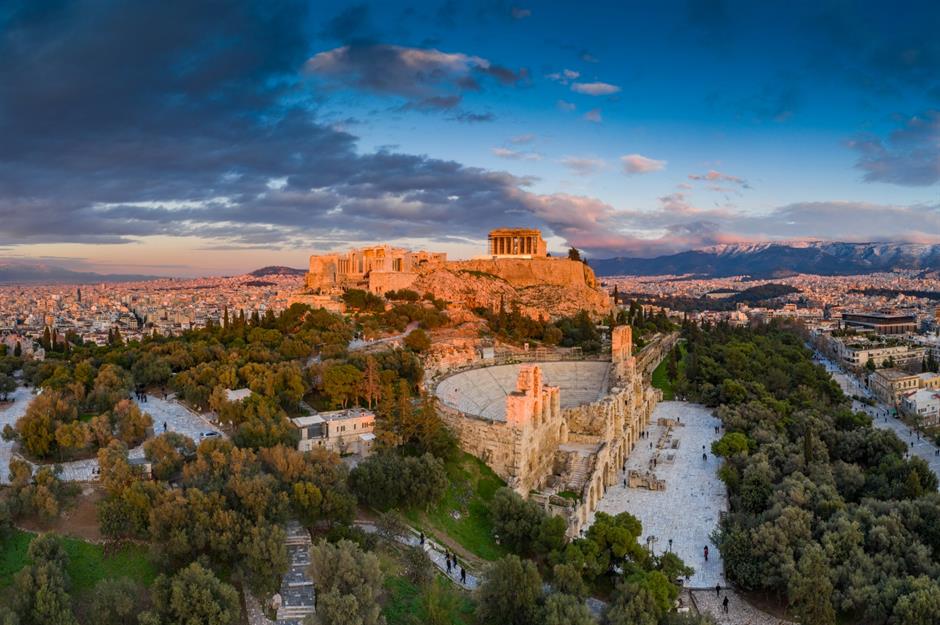 Drozdin Vladimir/Shutterstock
In 2019, Greek authorities confirmed that the corporate tax rate would be cut from 28% to its current rate of 24%, which comes in an effort to stimulate the country’s economy. As part of the same announcement, Greece’s Prime Minister Kyriakos Mitsotakis said that the country’s corporate tax rate would eventually be cut down to 20% by 2021. However, this plan has not yet come to fruition, perhaps as a result of the COVID-19 pandemic.

f11photo/Shutterstock
Keen to stimulate Japan's economy, which is stuck in a low-growth rut, now ex-Prime Minister Shinzō Abe's Government was committed to lowering corporate tax rates in the country. New initiatives were put in place in 2017, including a reduced tax rate for companies that agree to increase wages by 3%, and a rate of 20% for businesses investing in new technology. The standard corporate tax rate currently sits at 23.2%. 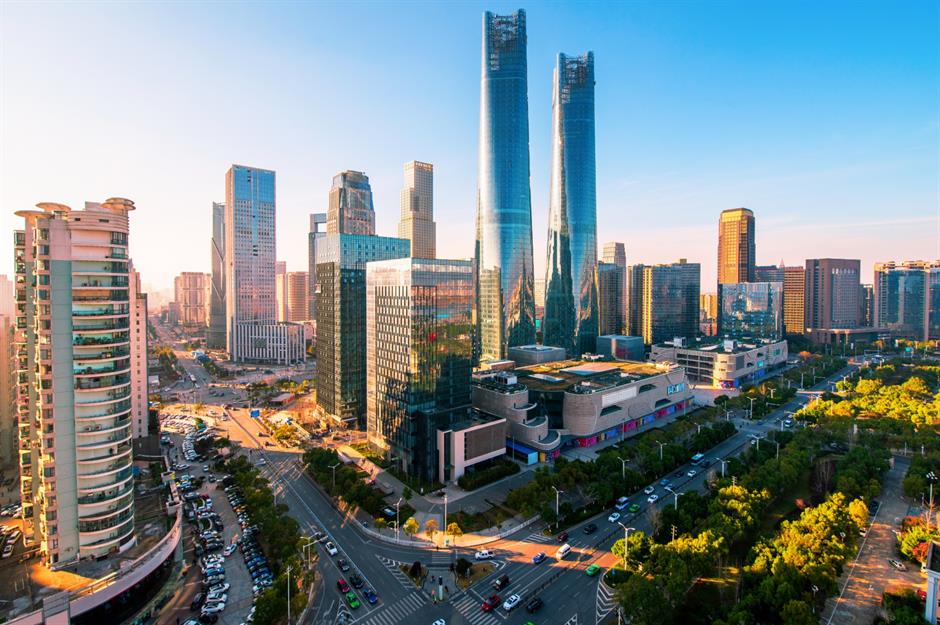 Rather than impose a flat corporate tax rate that can penalise small businesses, Israel cuts tech companies some slack by taxing them at just 6% on their annual profit. Otherewise, firms in the country pay the higher rate of 23%, which was reduced from 24% in 2018. 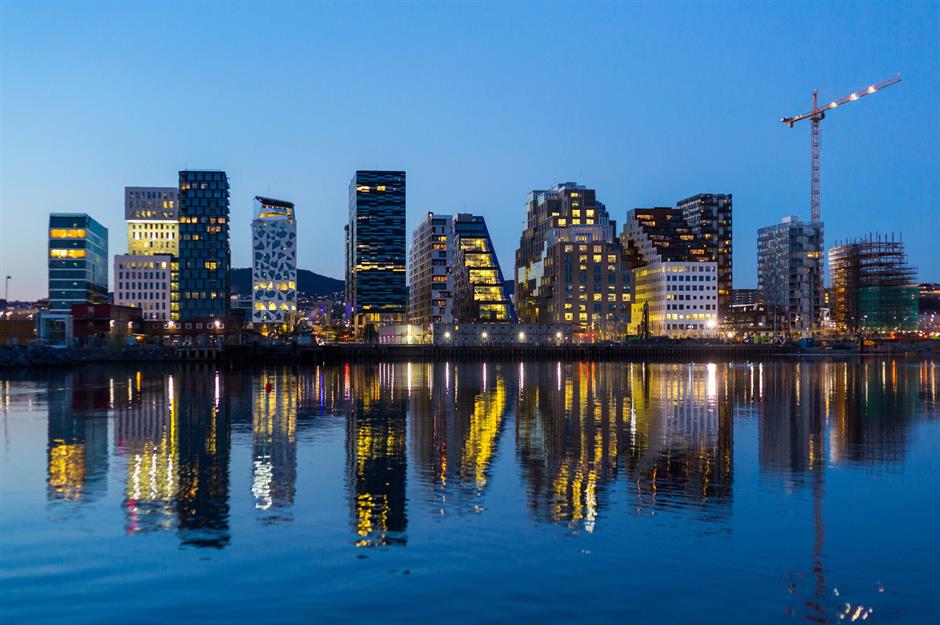 William Perugini/Shutterstock
Like many countries in Europe and elsewhere, Norway has reduced its corporate tax rate to entice foreign investors – the rate remained at 28% for years until 2014, when it was lowered to 27%. The tax has been further reduced nearly every year since then, and currently sits at its 2019 rate of 22%. 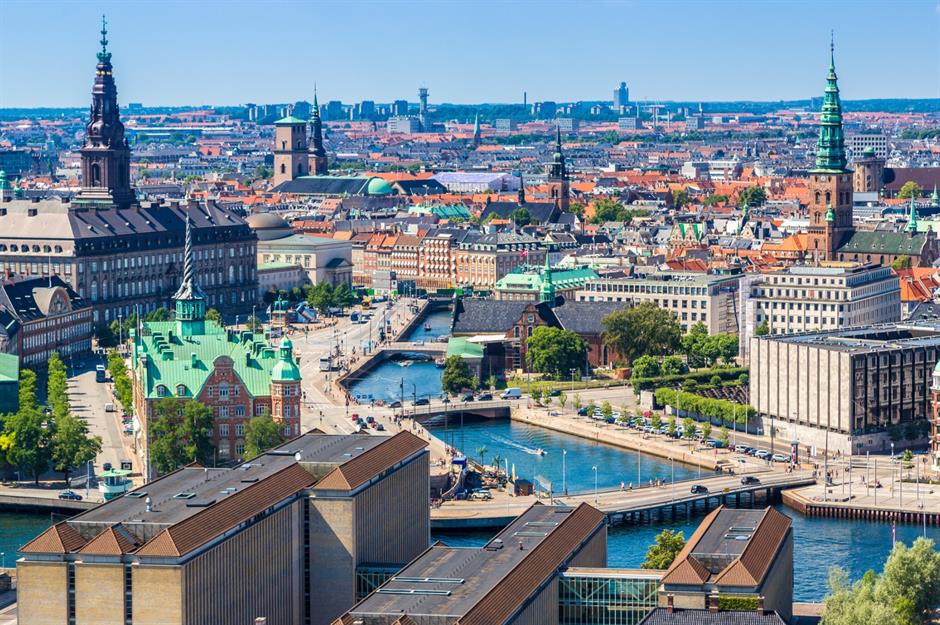 Denmark offers a lot more for foreign investors besides a low corporate tax rate of 22%. Incentives stretch beyond the low corporate tax rate, and wealthy foreign workers benefit from virtually no social security contributions and a special taxation scheme for high-salaried expats, who pay just 27% income tax for the first seven years spent working in the country (although there is an 8% labour market contribution to pay as well), which is quite the bargain compared to the standard rate of up to 56.5%. 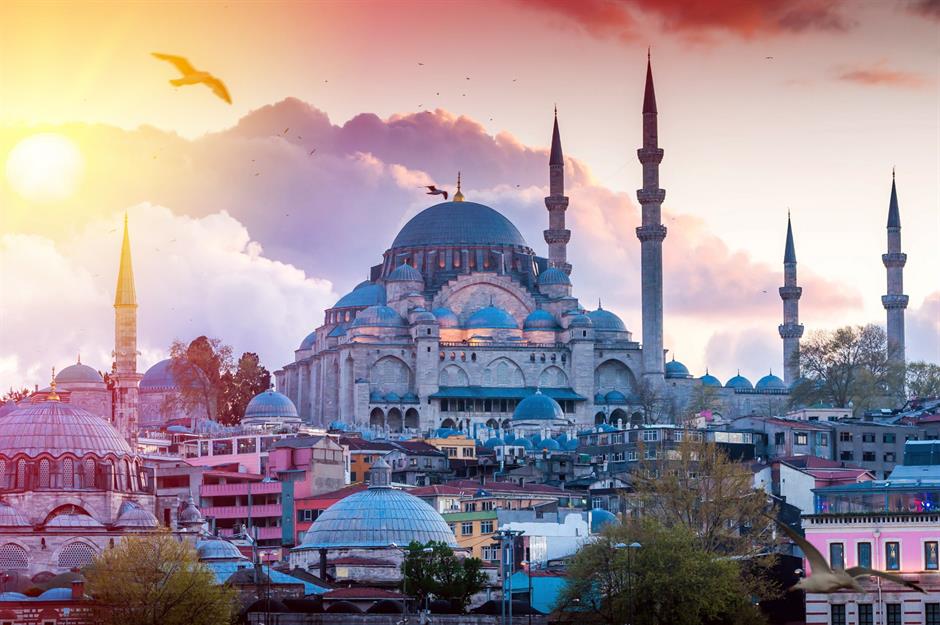 A low corporate tax trailblazer, Turkey reduced the levy to just 20% back in 2006, before increasing it to 22% in 2018. The rate was set to go back down to 20%, but remained at 22% in 2020. Despite bouts of political instability, the country is still an attractive location for multinationals, who benefit from various incentives. 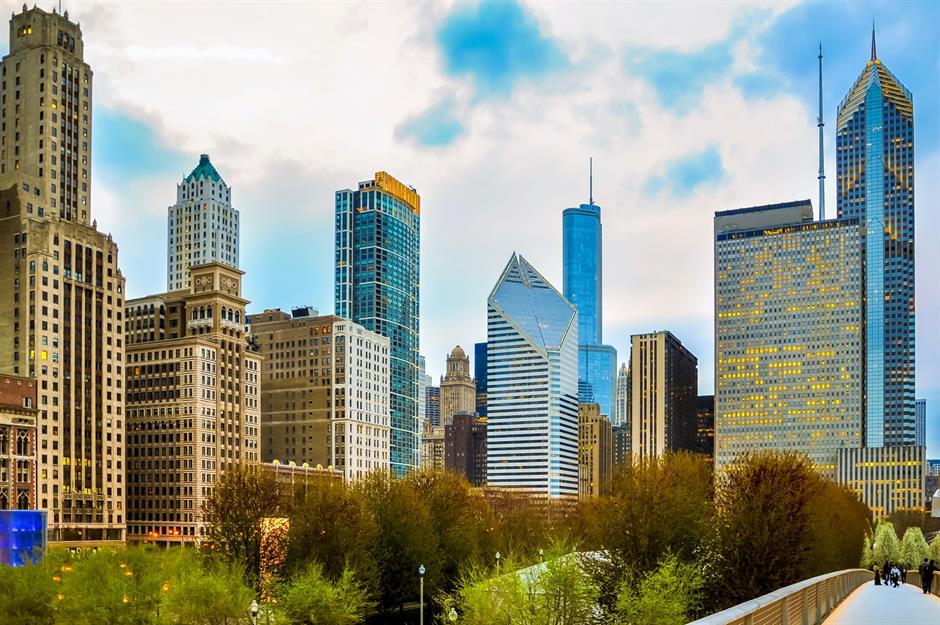 The Trump administration lowered the corporate tax rate to 21% from 35% in 2017, saying that the reform would allow for an annual increase of $4,000 (£3.1k) in income per household on average through stimulating wage growth, among other benefits. Business investment did increase following the cut, but not on the scale originally anticipated. Now President Biden's administration could be set to partially reverse the change as it seeks to pay for its ambitious infrastructure plans, bringing the rate up to 28%. The US Treasury Secretary Janet Yellen has even called for a global minimum corporate tax rate as a means to end the "race to the bottom" of countries seeking to attract businesses via competitive corporate tax rates. 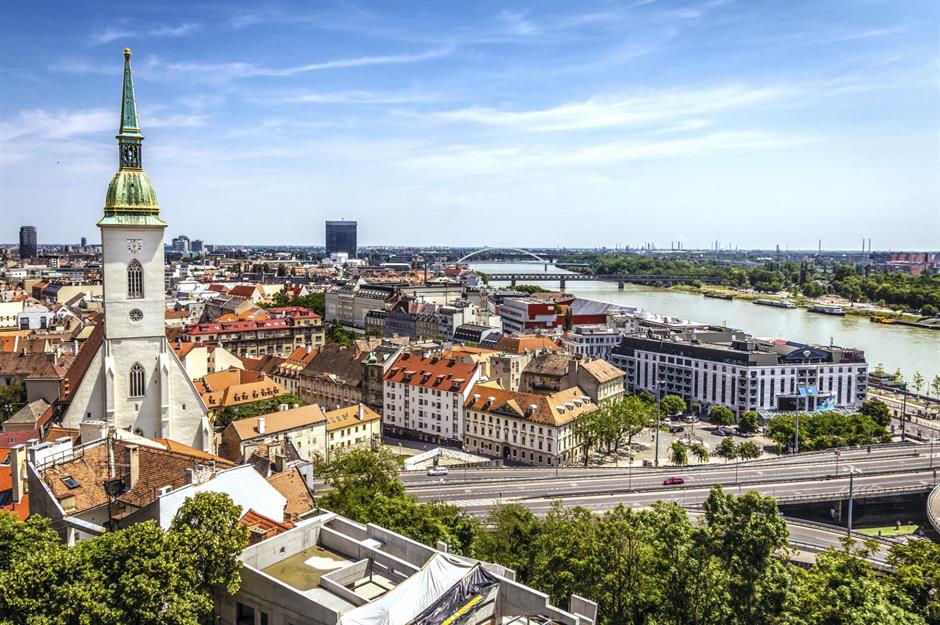 QQ7/Shutterstock
Simplicity reigns in the straightforward Slovak tax system. Reforms carried out in the 2000s cut corporate tax, and in September 2019 the rate was reduced again by 1%, bringing it to 21%. The country also did away with a number of other taxes, including inheritance tax. 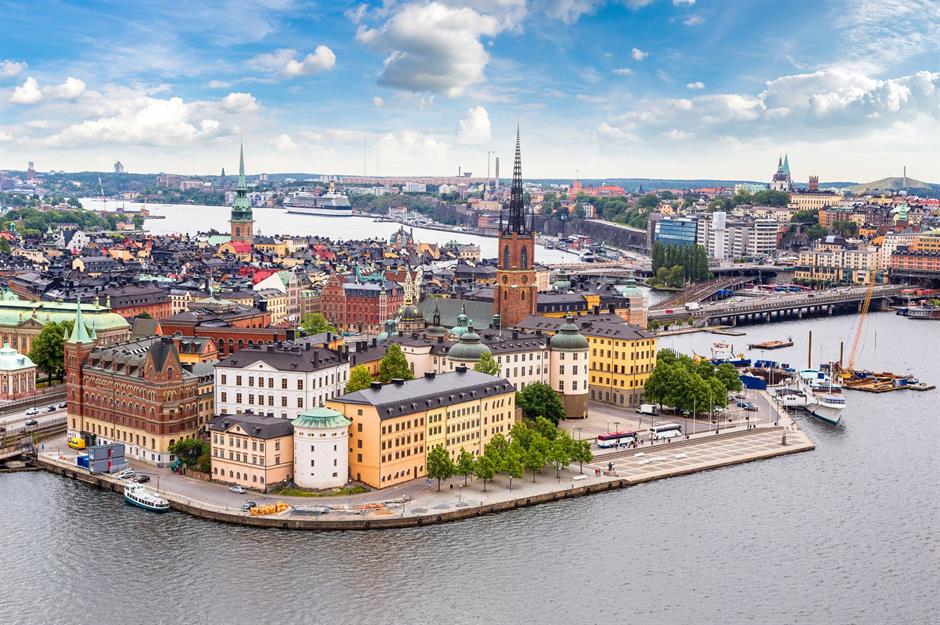 S-F/Shutterstock
Sweden imposed one of the highest corporate tax rates in the world, peaking at a staggering 60.1% in 1989. Since then, successive governments have lowered the amount of tax companies pay. In 2019, corporate tax was reduced to 21.4%, and was cut further to 20.6% from 1 January 2021, making the Scandinavian country more business-friendly than most.

Grisha Bruev/Shutterstock
Taxes in Finland tend to be steep. VAT is charged at up to 24% on many goods and services, income tax can be excessive at up to 56.95%, and taxpayers are even liable for “church tax”. Corporate tax, on the other hand, is nice and low at just 20%. 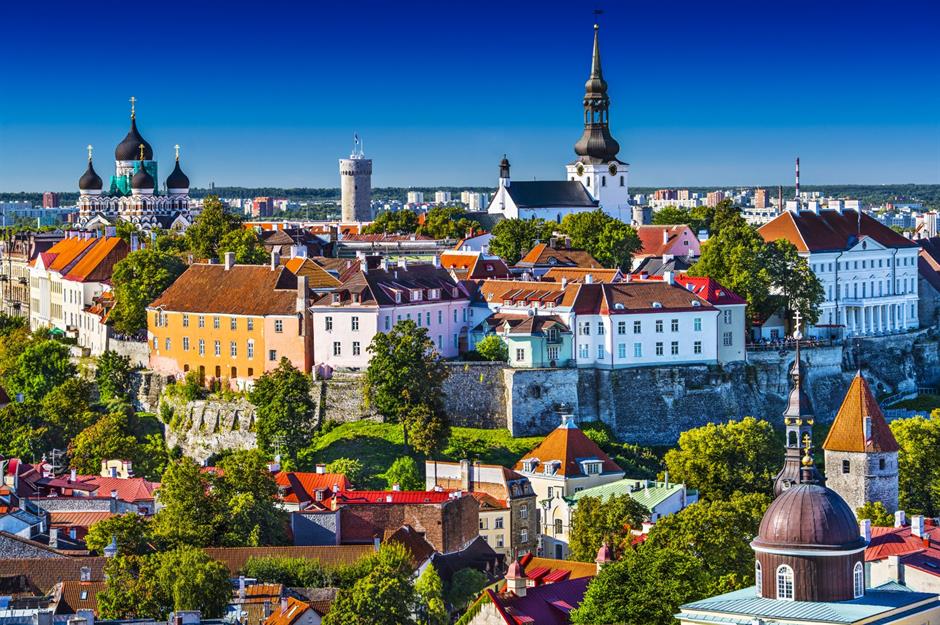 ESB Professional/Shutterstock
Estonia is considered one of the most attractive countries for foreign companies. Its low corporate tax rate of 20% only applies to distributed profits, and any profits generated abroad are totally exempt from taxation. Since 2019, companies can also apply for a reduced tax rate of 14% if their taxable profit is equal to, or less than, that of the last three years.

Creative Family/Shutterstock
Likewise, Icelandic firms pay only 20% corporate tax. The country cut the rate from 33% to just 18% in the 2000s, before going up to its current rate in 2011. Iceland is now seen as a leader in low enterprise taxation and a thoroughly straightforward place to do business. 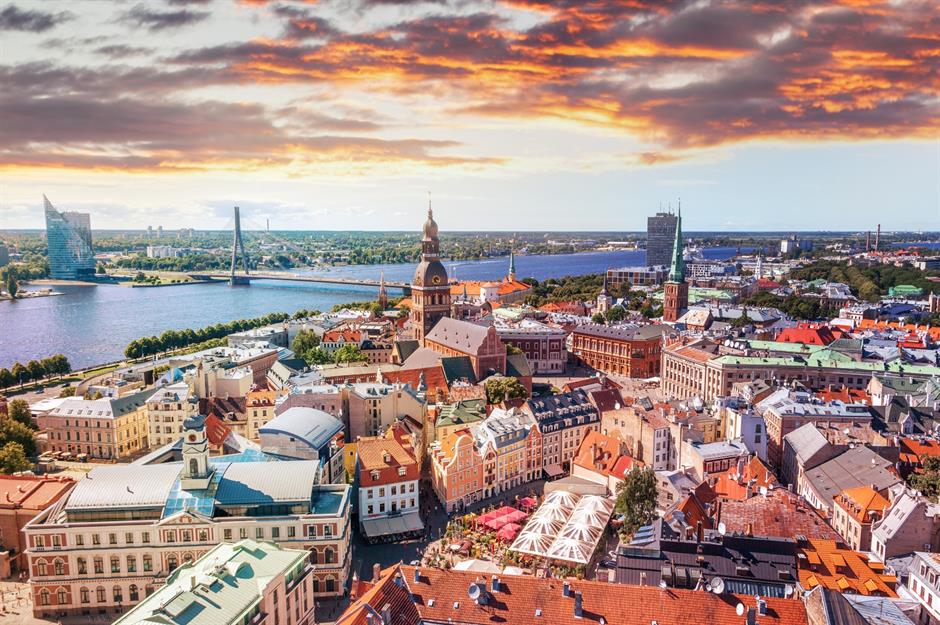 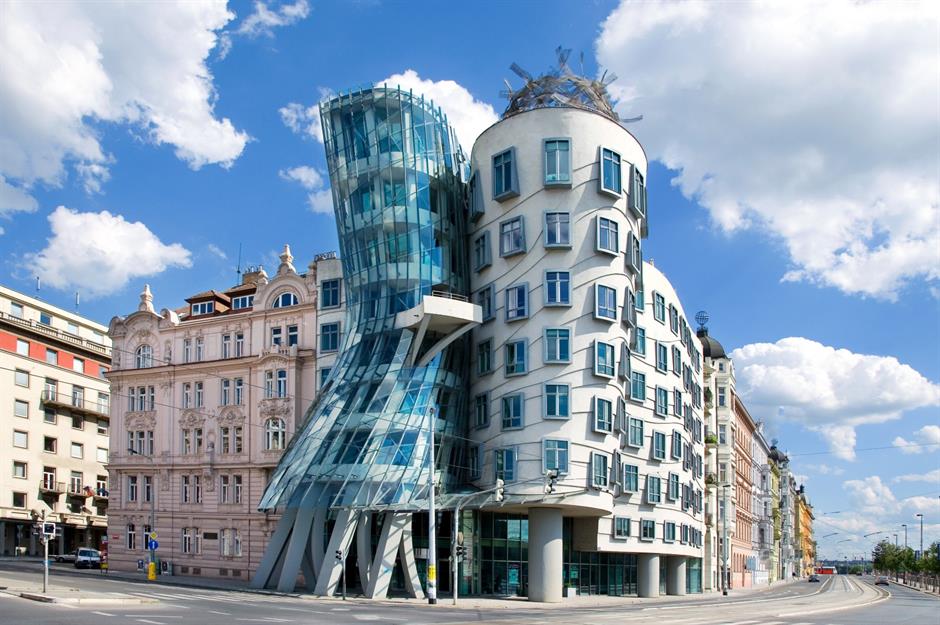 An appealing place for international investors, the Czech Republic has a low corporate tax rate of 19%. Before 2021, income was taxed at a flat rate of 15%, which was a major plus for high-salaried executives looking to relocate to the country. However, as of this year the country has adopted a progressive income tax system, where the basic tax rate would remain 15% but income over CZK 1.7 million ($77.9k/£56.4k) is now taxed at 23%. 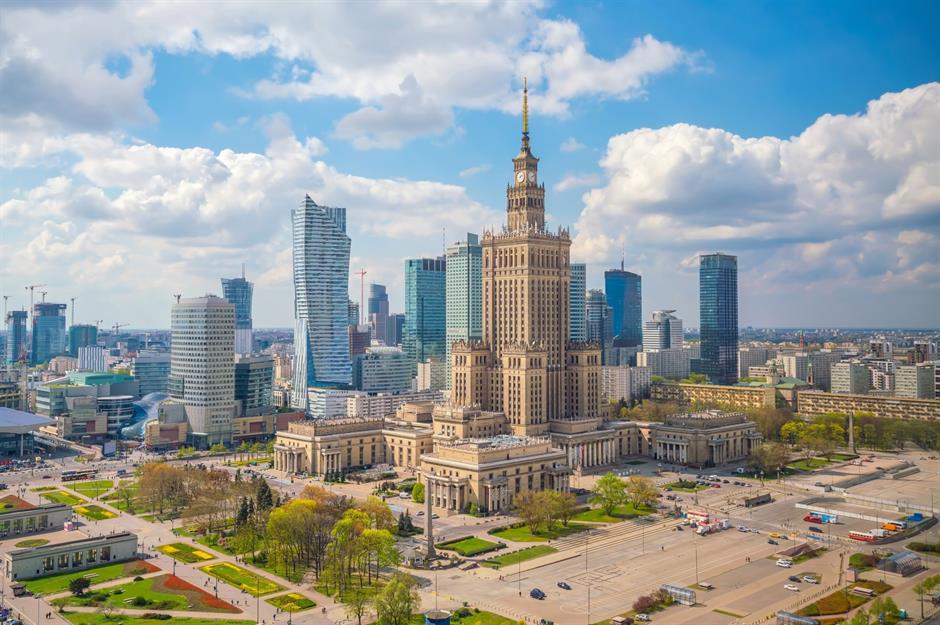 f11photo/Shutterstock
Poland may have a low corporate tax rate of 19% and a lax taxation system, but its government is cracking down on firms that are registered in tax havens, transfer profits abroad and generally fail to pay their fair share. In 2019, the country also scrapped income tax for around 2 million young workers under the age of 26 to try and prevent the country’s best and brightest seeking better prospects abroad.

berm_teerawat/Shutterstock
The UK was set to reduce its corporate tax rate by 2% to just 17% by April 2020, but Prime Minister Boris Johnson shelved this plan in November 2019, deciding to use the money made from those taxes – a whopping £6 billion ($7.7bn) – on public services instead. The UK now plans to increase its corporation tax rate to 25% from April 2023 to help pay for the cost of the coronavirus pandemic. 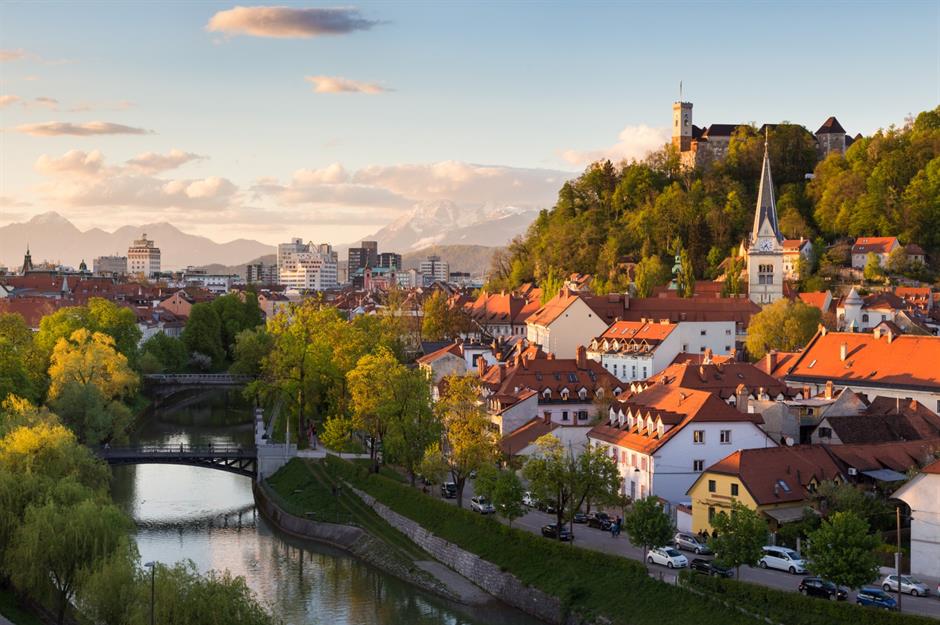 Matej Kastelic/Shutterstock
Slovenia raised its level of corporate tax from 17% to 19% in 2017. The increase was implemented to finance a cut in income tax, which was considered excessively high in the country, with the top band reaching up to 50%. 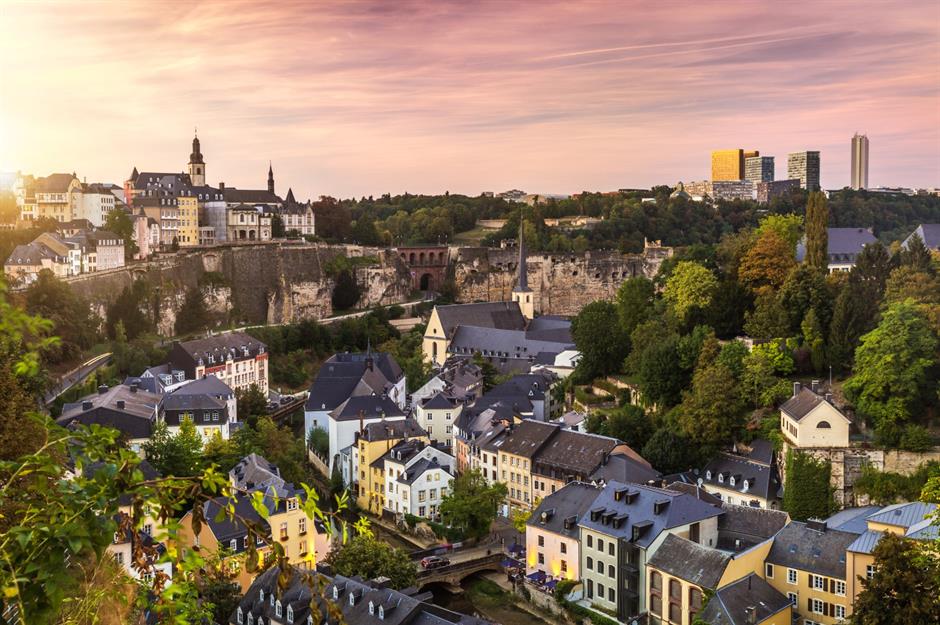 Luxembourg taxes companies at 17%, but for companies based in Luxembourg City other taxes, such as the solidarity surtax of 7% and the 6.75% municipal business tax rate, mean companies can end up paying a rate of 24.94% overall.

Businesses in Germany pay corporate tax at a rate of 15% but this isn't the full story. Companies are also subject to a solidarity surcharge of 5.5%, which takes the tax rate up to 15.825% on average. However, companies are also liable for trade tax, which varies depending on the city in which a business is based. 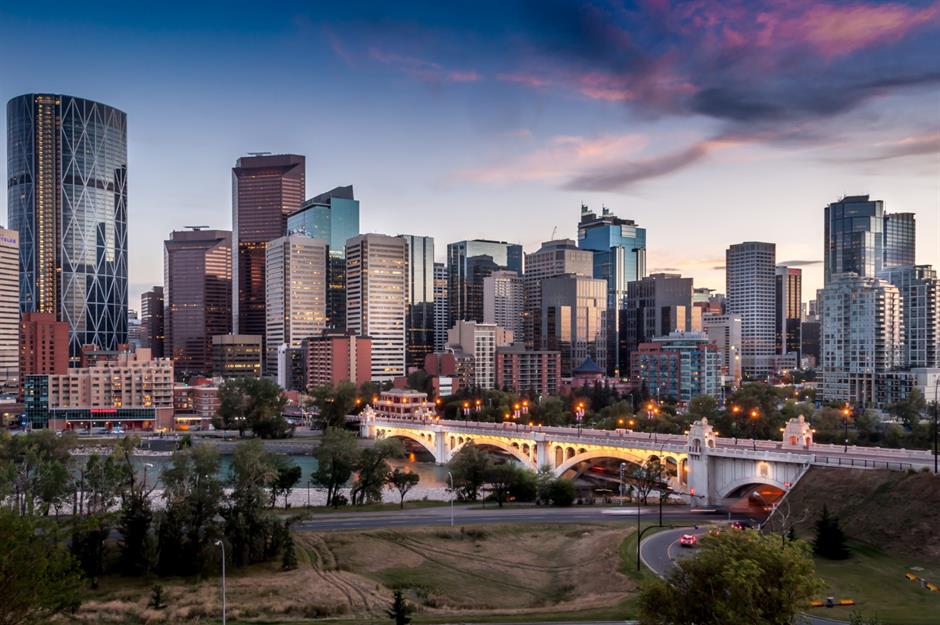 Canada's low corporate tax rate of 15% had enticed countless US firms, but the country's appeal to American companies started to wane following the Trump administration's dramatic corporate tax cut. Capital started to head south and the country has struggled to hold on to companies, particularly in the oil and gas sector where new regulations have driven out more than $30 billion (£23bn) of foreign investment. This week, President Justin Trudeau said he was open to discuss global corporate tax reform after US Treasury Secretary Janet Yellen's calls for a minimum global rate. 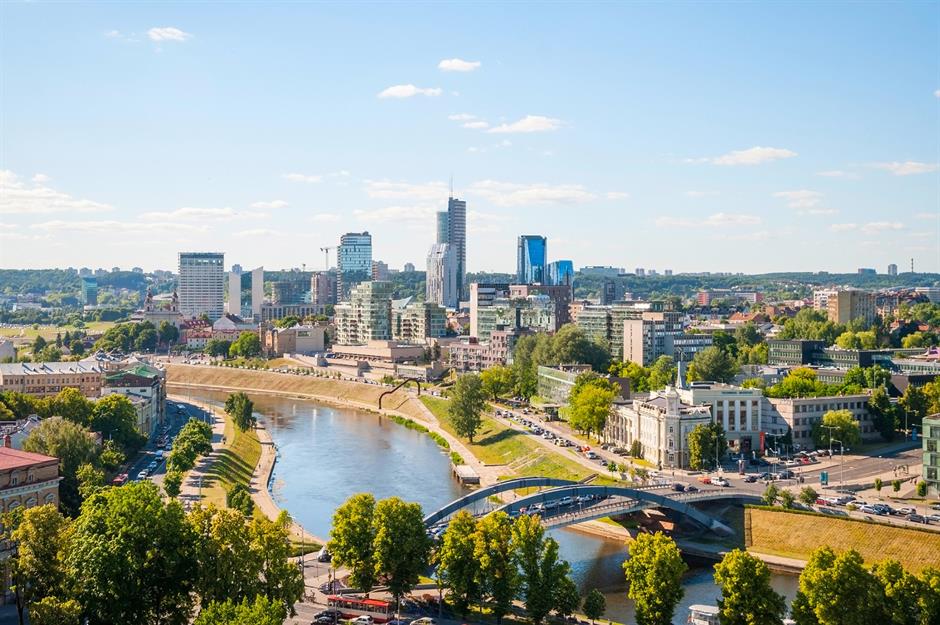 Ana Flasker/Shutterstock
Corporate tax in Lithuania also sits at 15%, but a reduced rate of 5% can be offered to “micro companies”, which are defined as businesses with up to 10 employees and €300,000 ($356k/£276k) in income per year. 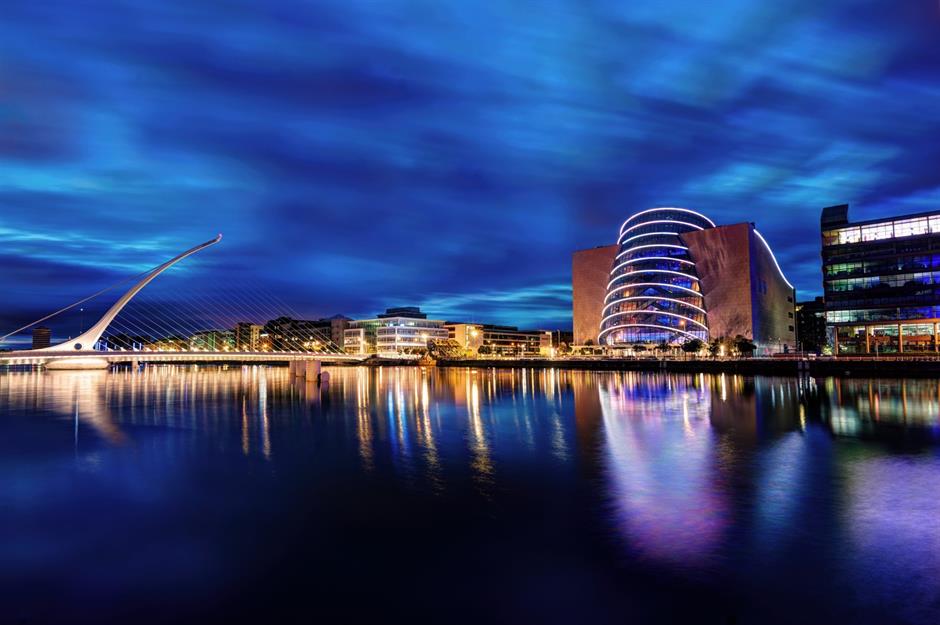 Ireland’s low corporate tax rate of 12.5% has transformed its economy and attracted major companies from far and wide. For example, the country is currently responsible for 30% of the EU’s digital exports, with heavyweights such as Google, Facebook and Apple choosing the country as the base for their European operations. While the Emerald Isle’s model for attracting inward investment has been imitated by several nations worldwide, it has drawn the ire of others, including France. 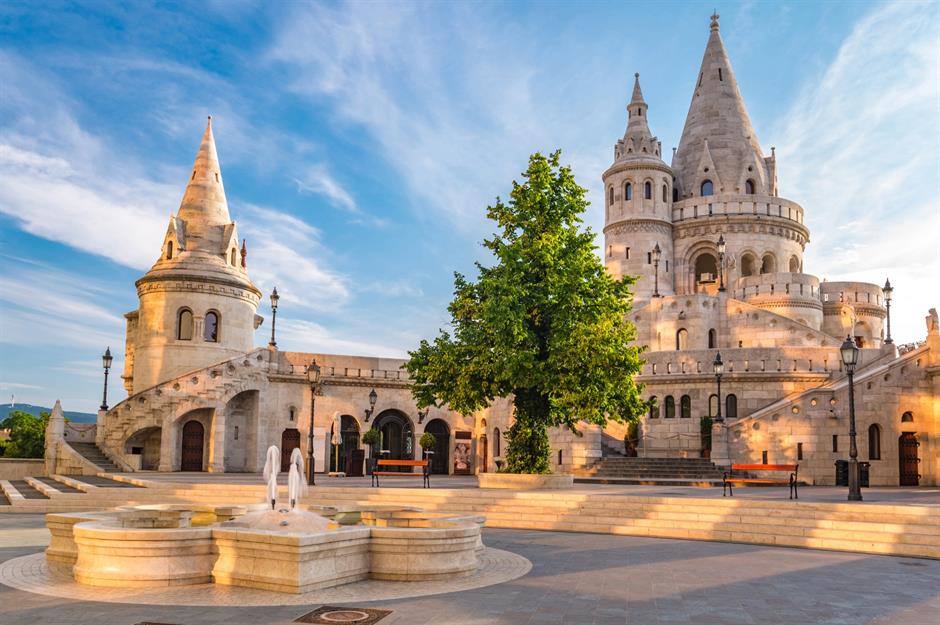 Noppasin Wongchum/Shutterstock
In 2017, Hungary reduced its corporate tax rate from 19% to 9%, and now has the lowest rate in the EU. The move comes as part of Prime Minister Viktor Orbán's mission to attract significant foreign investment. 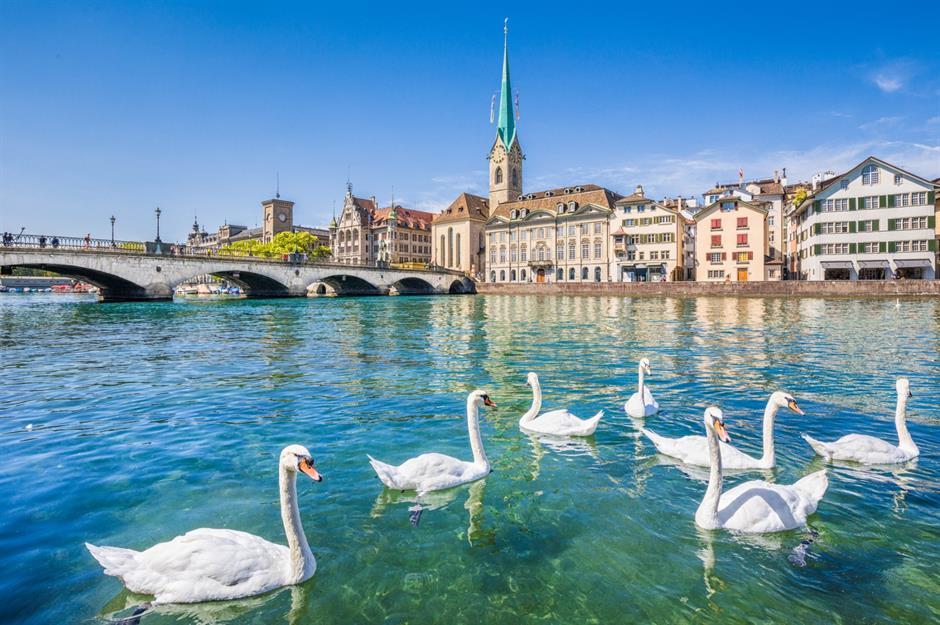 Switzerland boasts the lowest corporate tax rate in the world on paper, with company profits being taxed at just 8.5% at the federal level. However, the country's cantons impose further taxes, which typically leads a firm’s corporate tax to somewhere between 11.9% and 21.6%, depending on its turnover.

Now read about the countries where people pay low taxes