Treasures the Nazis stole that were sensationally recovered 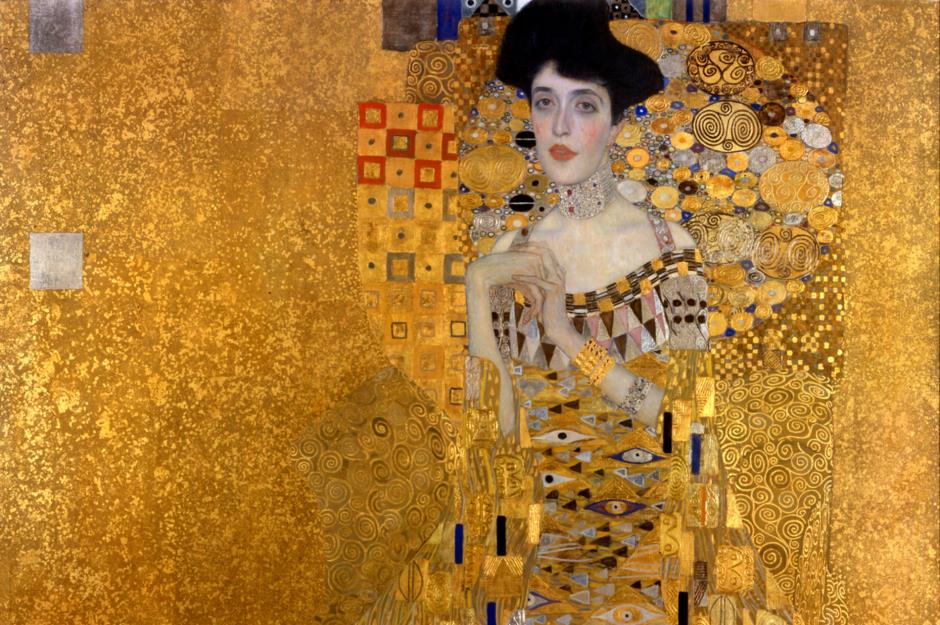 Gustav Klimt
Looting on a bewildering scale, the Nazis plundered over 650,000 works of art from Jewish families and others in occupied territories, seizing everything from revered Old Master paintings to renowned sculptures. Hundreds of thousands of treasures are still missing but a number of masterpieces have been sensationally recovered. Here are 10 of the most notable and the stories behind their return.

Two Riders on a Beach by Max Liebermann 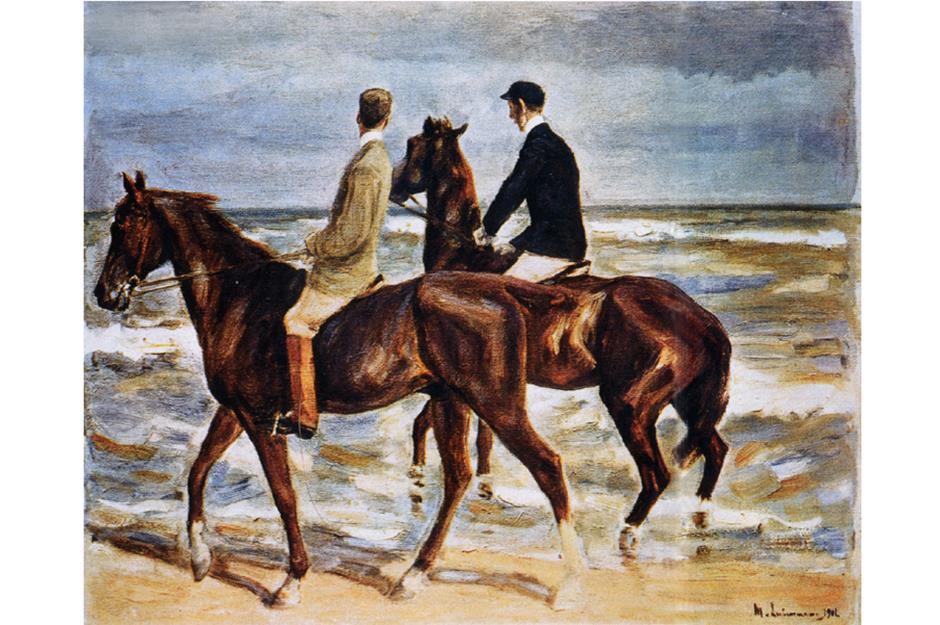 Max Liebermann/Wikimedia Commons
Max Liebermann's 1900/01 masterpiece was stolen from Jewish collector David Friedmann during the so-called Kristallnacht pogrom, a wave of violent anti-Jewish activity, in November 1938. It turned up in a Munich apartment in 2012, along with 1,405 other works of art, valued at more than $1 billion (£747m). The partly ill-gotten collection included works by Monet, Matisse, Renoir and Chagall.

Two Riders on a Beach by Max Liebermann 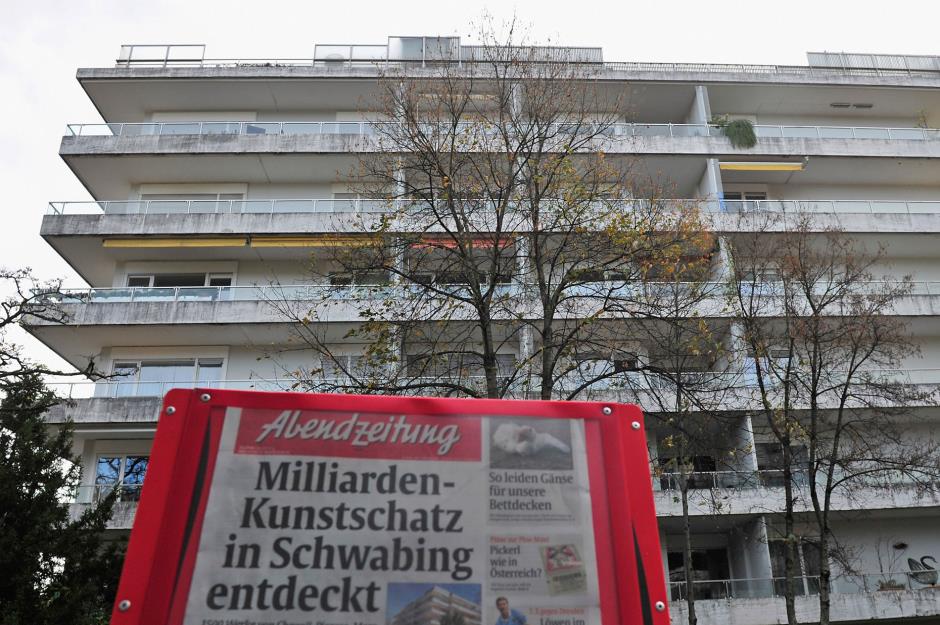 Lennart Preiss/Stringer/Getty
The apartment belonged to Cornelius Gurlitt, the son of Nazi art dealer Hildebrand Gurlitt, who claimed the collection had been destroyed in a wartime bombing raid. The stolen artworks with viable claims, including the Max Liebermann painting, were returned to their rightful owners. Two Riders on a Beach sold for $2.5 million (£1.865m) at a Sotheby's auction in 2015. The remaining artworks were bequeathed to the Museum of Fine Arts Bern in Switzerland. 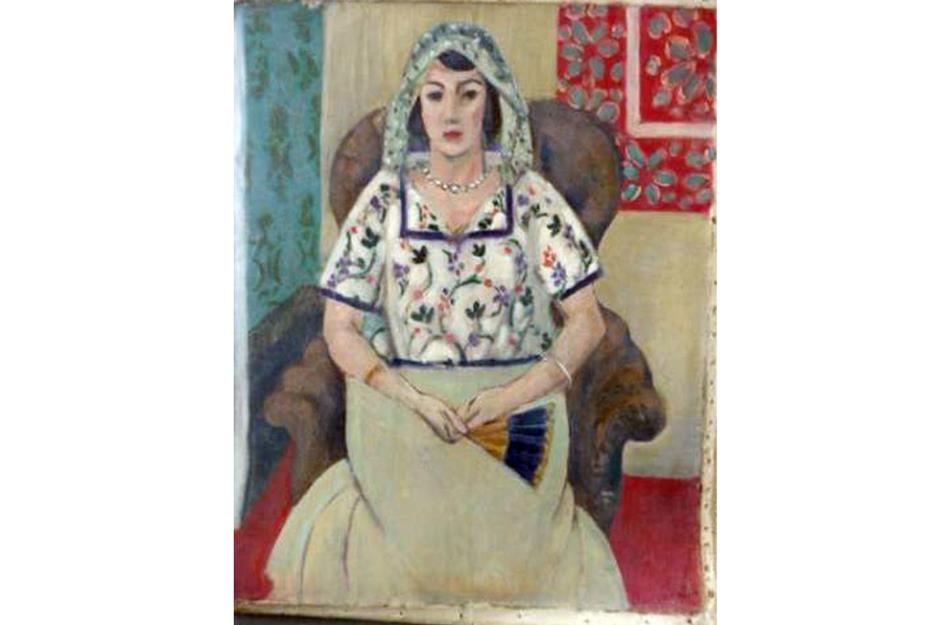 Courtesy Lost Art Koordinierungsstelle
The German court that approved the return of Max Liebermann's Two Riders on a Beach also ordered that this Matisse masterpiece be handed over to the heirs of its former owner, Jewish art dealer Paul Rosenberg, who was forced to flee the Nazis in 1940. 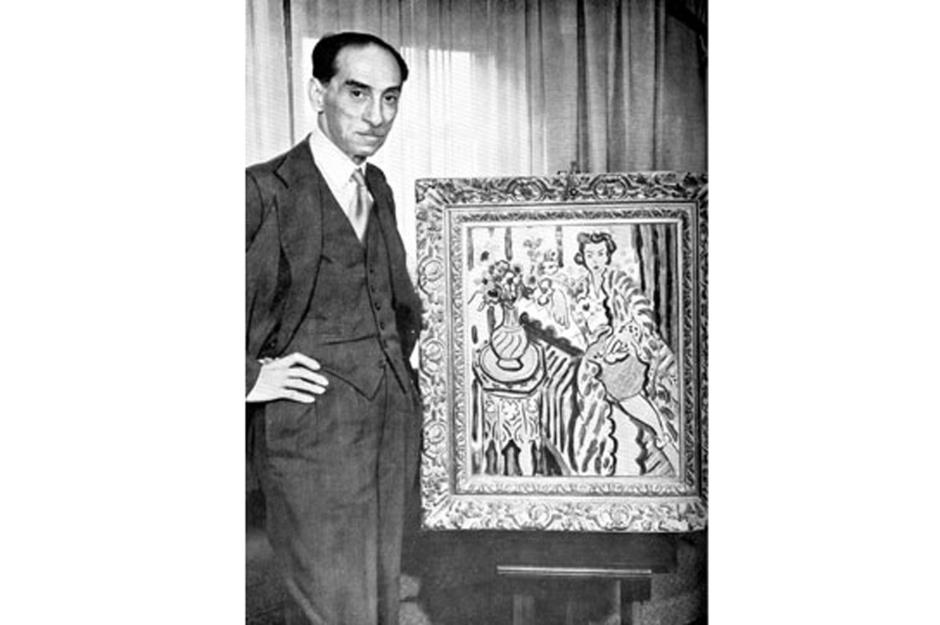 MoMa/Wikimedia Commons
Seated Woman, which was painted in 1921, was also appropriated by Hildebrand Gurlitt. After the war, Rosenberg (pictured here with another of his precious Matisse paintings) struggled to recover the 400 artworks that were stolen from him. When he died in 1959, around 60 were still missing. 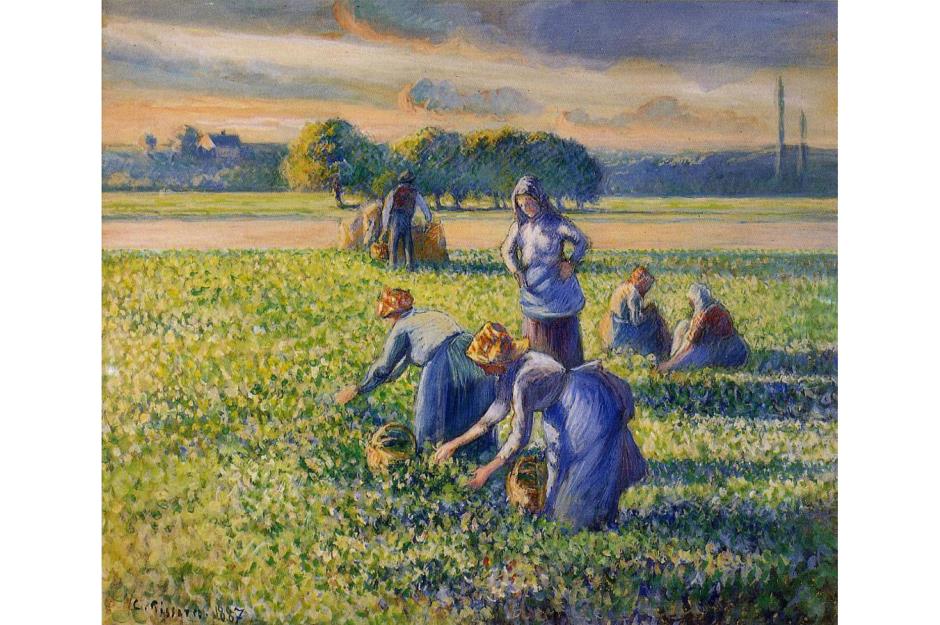 Camille Pissarro/Wikimedia Commons
This 1887 gouache work by Danish-French Impressionist painter Camille Pissarro was part of Jewish businessman and art enthusiast Simon Bauer's collection. The collection was confiscated by the collaborating Vichy French authorities in 1943, and Bauer was rounded up and sent to the infamous Drancy Internment Camp near Paris.

AP/PA
Bauer survived the war but died a broken man in 1947. His prized painting was sold on several times before ending up in the collection of American couple Bruce and Robbi Toll, who insisted they had no idea it was stolen. Bauer's descendants, including Jean-Jacques Bauer (pictured), sued them and won the case. In November 2017, a French court ordered the Tolls to relinquish the multi-million-dollar looted artwork.

Portrait of Adele Bloch-Bauer I by Gustav Klimt 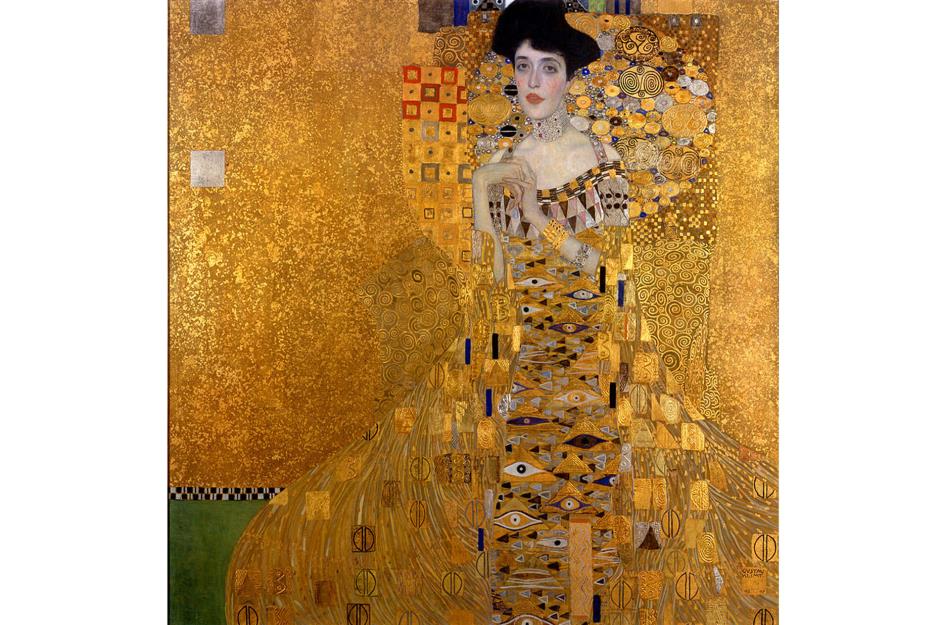 Gustav Klimt/Wikimedia Commons
This 1907 portrait by Gustav Klimt, now better known as The Woman in Gold, was stolen by the Nazis from Jewish banker and sugar producer Ferdinand Bloch-Bauer, and handed over to Vienna's Belvedere Gallery in 1941. The painting, which is worth $150 million (£112m) today, depicts Bloch-Bauer's wife Adele.

Portrait of Adele Bloch-Bauer I by Gustav Klimt 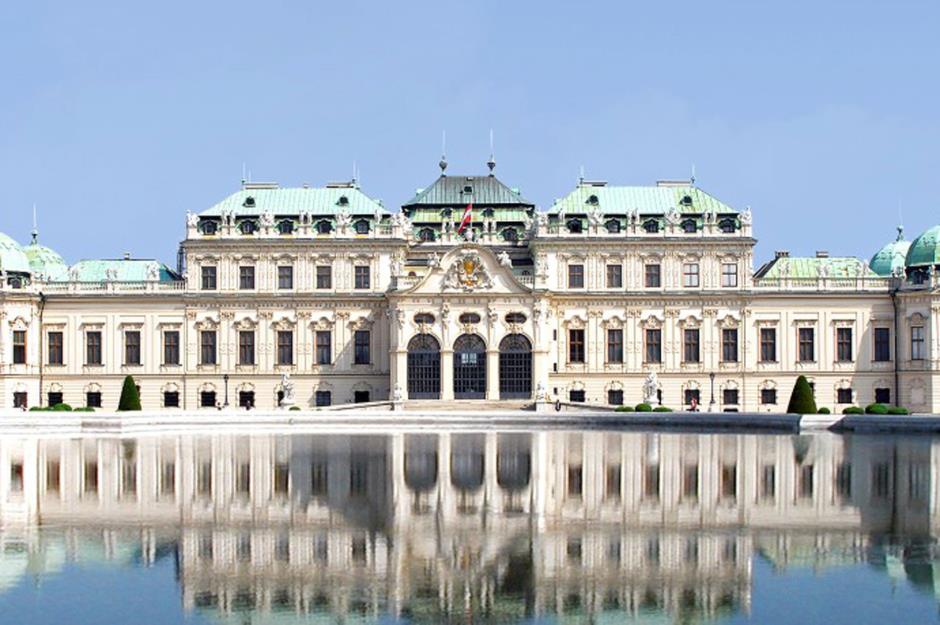 Bloch-Bauer had fled Vienna when the painting was stolen, and died penniless in Switzerland in 1945. For years, the Belvedere Museum (pictured) refused to return the artwork to Bloch-Bauer's heirs, but in 2006 the former tycoon's niece succeeded in claiming the portrait following a protracted legal battle. It was sold to Estée Lauder heir Ronald Lauder that same year for a record $135 million (£100m). The story of the battle to win it back from the gallery was documented in the film Woman in Gold, starring Helen Mirren. 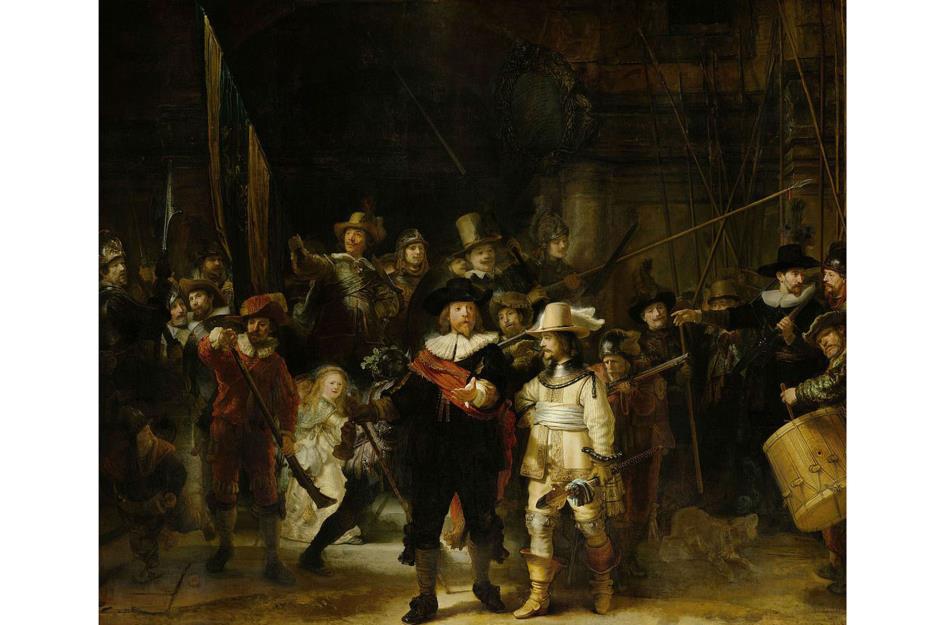 Rembrandt van Rijn/Wikimedia Commons
The Monuments, Fine Arts, and Archives programme was set up by the Allies in 1943 to recover Nazi-plundered artworks. Dubbed 'the Monuments Men', these art experts scoured Europe for purloined masterpieces, which included The Night Watch, Rembrandt's most celebrated work. The Monuments Men were the subject of a 2014 movie starring George Clooney. 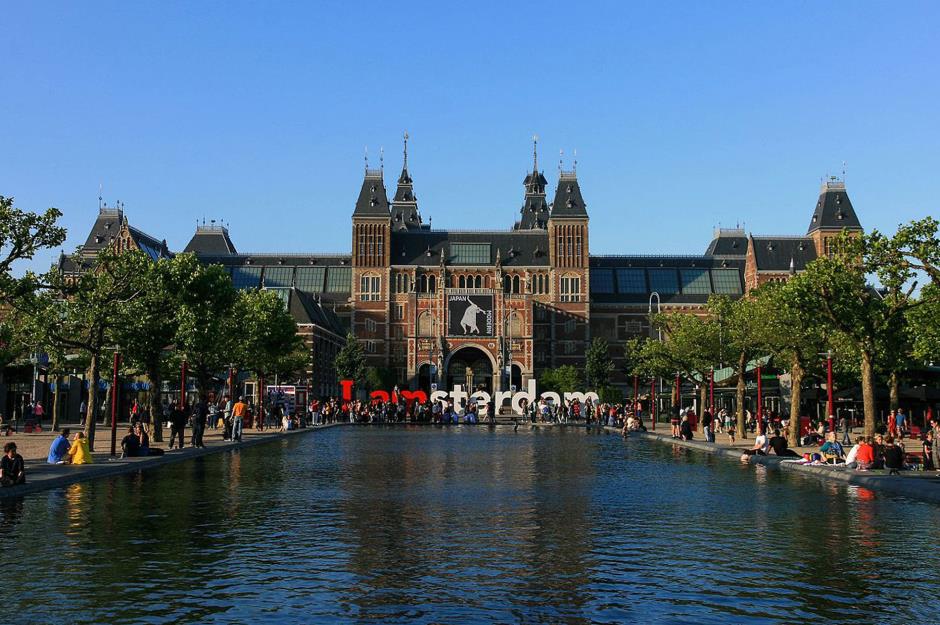 Marco Imbauer/Wikimedia Commons
The renowned painting was taken from Amsterdam’s Rijksmuseum (pictured) in 1939 and moved to a secret Nazi repository in Maastricht, the Netherlands, ostensibly for safekeeping. Monuments Man George Stout pinpointed the painting in 1945 and Rembrandt's most famous work was returned to its home in the Netherlands shortly after.

The Bust of Charlemagne 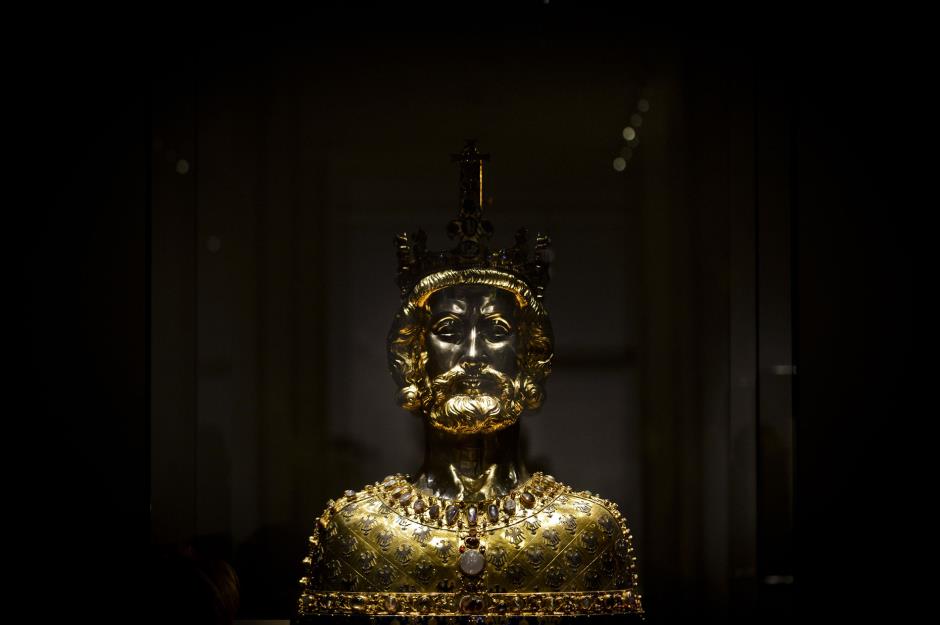 Sascha Schuermann/Stringer/Getty
This gem-encrusted gold and silver gilt bust of King Charlemagne has been described as one of the most important works of the Middle Ages. The bust was commissioned around 1350 by King Charles IV of Bohemia and contains Charlemagne's skullcap. It remained in the Aachen Cathedral Treasury until the outbreak of World War II in 1939.

The Bust of Charlemagne 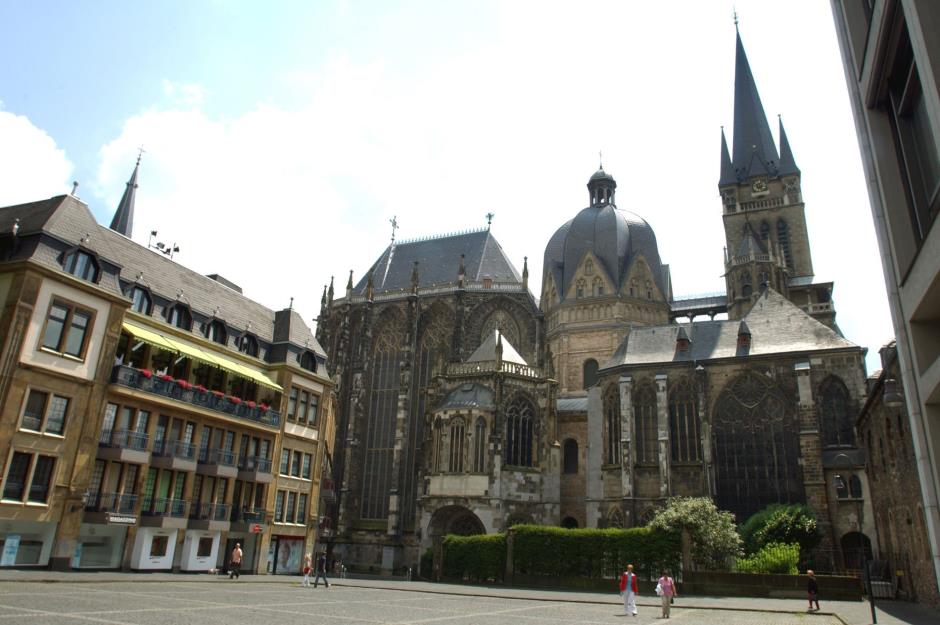 Horst Ossinger/DPA/PA
The painting was eventually moved to an underground tunnel in Siegen, central Germany, where it was found in 1945 by Monuments Man Walker Hancock, with the help of Aachen vicar Erich Stephany, who saved the priceless bust from the very real threat of destruction or theft, and organised its return to Aachen Cathedral (pictured).

Lady with An Ermine by Leonardo Da Vinci 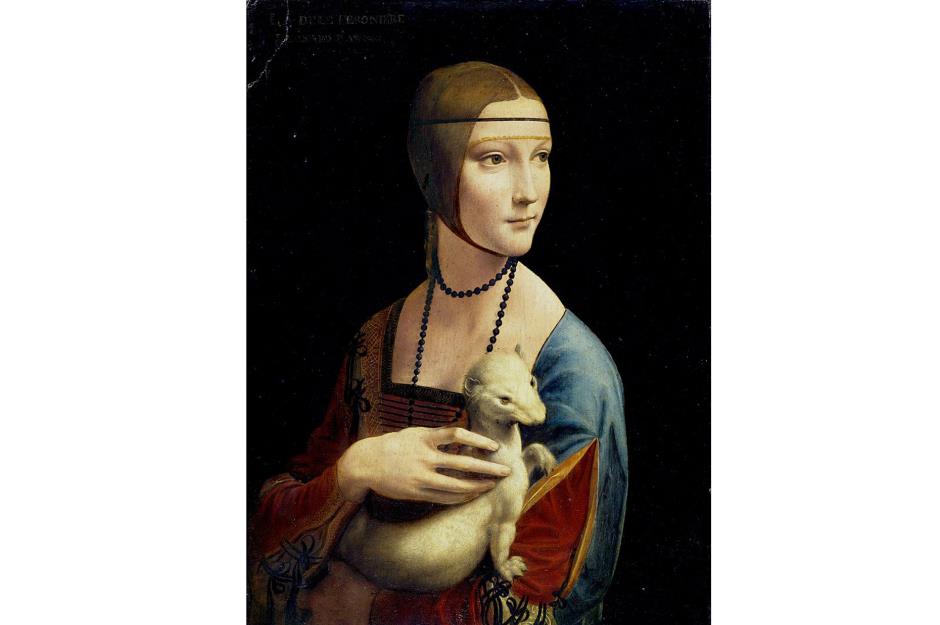 Leonardo Da Vinci/Wikimedia Commons
One of Poland's most esteemed art treasures, Leonardo Da Vinci's Lady with An Ermine was stolen by the Nazis from its hiding place in a cellar in Kraków at the outbreak of World War II in 1939. The painting is notable for being one of only four portraits attributed to the Old Master, which include the Mona Lisa.

Lady with An Ermine by Leonardo Da Vinci 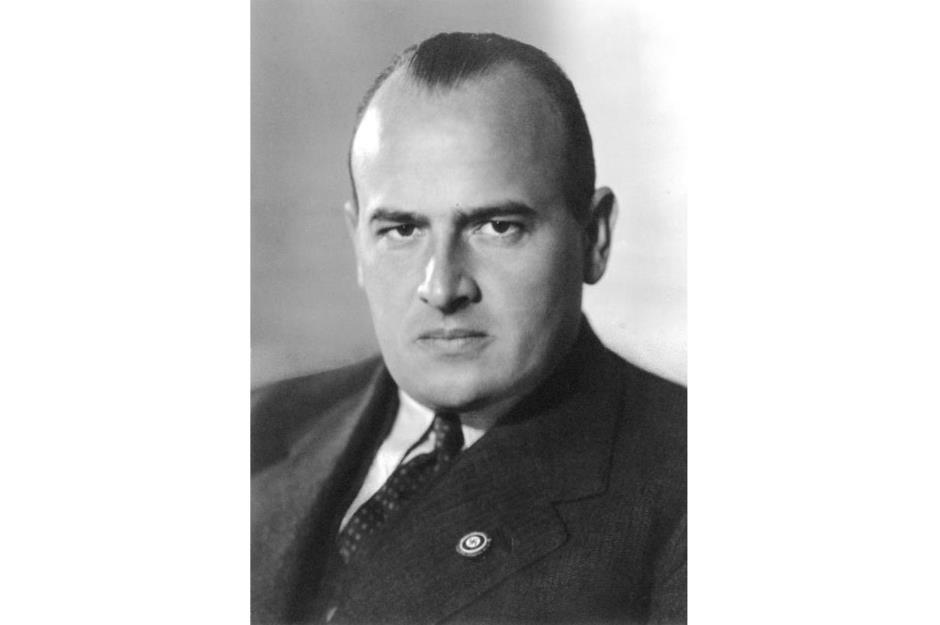 Bundesarchiv Bild/Wikimedia Commons
The painting found its way into the hands of the infamous Nazi Governor-General of Poland, Hans Frank (pictured), who displayed the artwork in his home. The priceless portrait was discovered by the Monuments Men at the end of the war, and sent back to its home in Kraków.

Altarpiece by Veit Stoss in Kraków 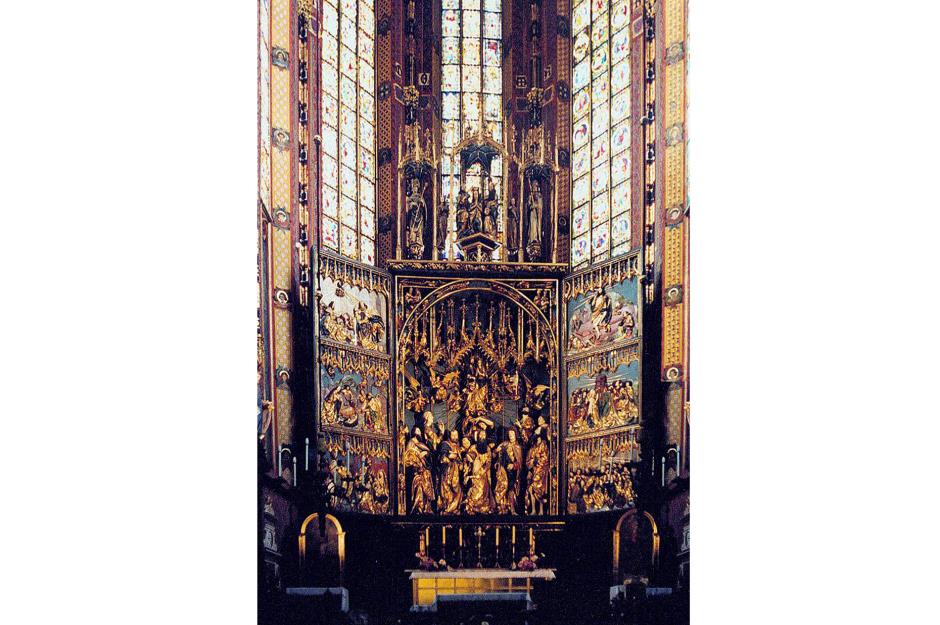 PKO/Wikimedia Commons
This spectacular artwork is the largest Gothic altarpiece in the world and one of Poland's most precious treasures. It was created by German sculptor Veit Stoss between 1477 and 1484, and graced the high altar of Kraków's St. Mary's Basilica for centuries.

Altarpiece by Veit Stoss in Kraków 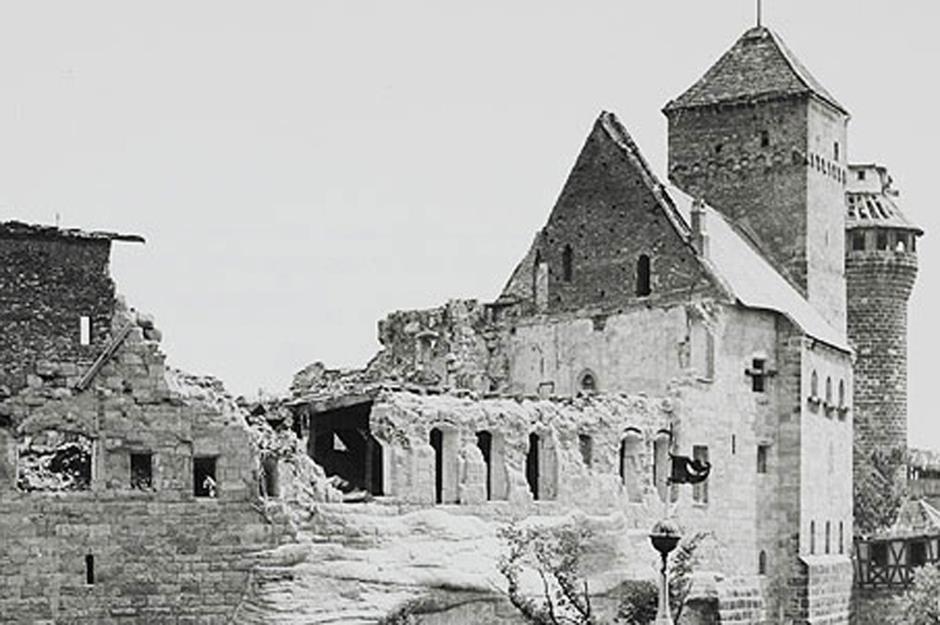 Courtesy Bundesarchiv Bild
In 1941, Hans Frank ordered the altarpiece to be seized and moved to the Third Reich. Hitler thought of the artwork as an important part of German heritage on account of the sculptor's nationality. The damaged altarpiece was recovered by Allied troops in 1946, concealed in the basement of the bombed-out Nuremberg Castle, and returned to St. Mary's Basilica, where it was extensively restored.

The Astronomer by Johannes Vermeer 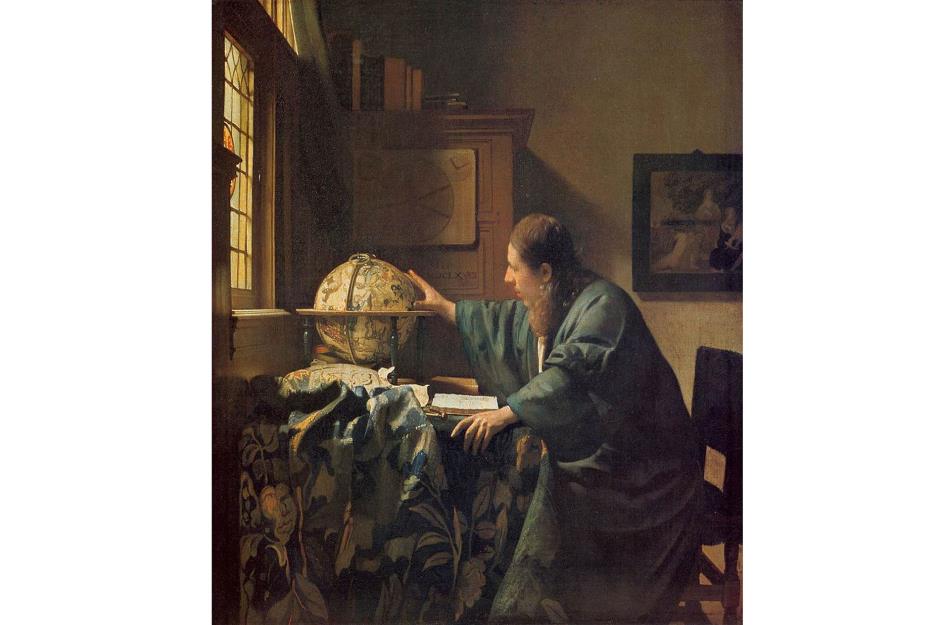 Johannes Vermeer/Wikimedia Commons
This hugely important painting by Dutch Master Johannes Vermeer, which dates from 1668, was earmarked as the focal point for Hitler's planned art gallery in Berlin. The artwork was stolen in 1941 from the Paris mansion of Jewish financier Édouard Alphonse James de Rothschild, and moved to Germany.

The Astronomer by Johannes Vermeer 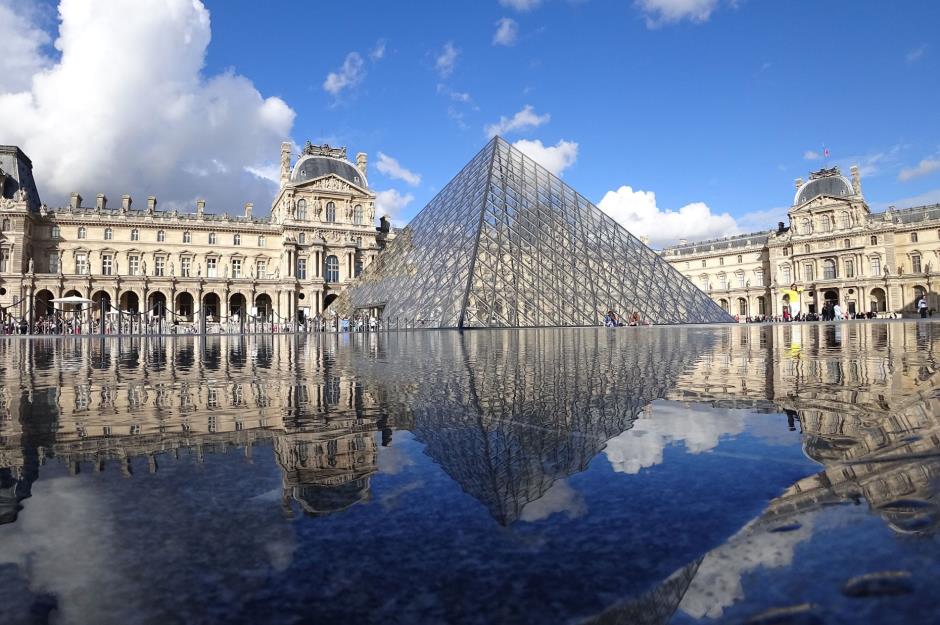 Shutterstock
After the war, the painting was located and returned to the Rothschild family. A small swastika had been stamped on the back of the canvas, where it remains today. The painting was purchased by the French government in 1983 to offset inheritance tax, and currently hangs in the Louvre in Paris.

The Madonna of Bruges by Michelangelo 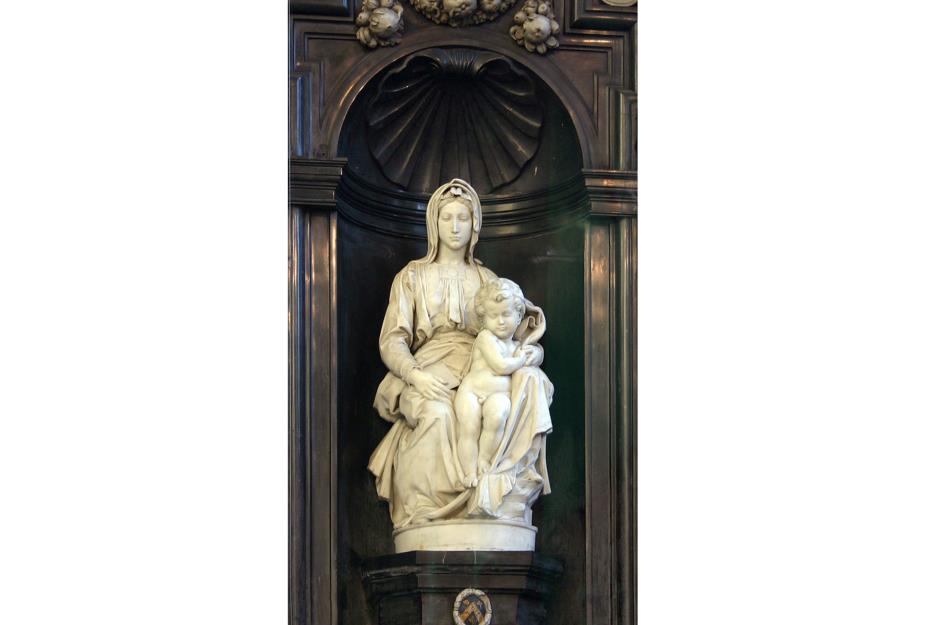 Elke Wetzig/Wikimedia Commons
One of the most important works of art pilfered by the Nazis, this early 16th-century marble statue of the Madonna and child by the great Renaissance artist Michelangelo is the most treasured object in the Church of Our Lady in Bruges, Belgium.

The Madonna of Bruges by Michelangelo 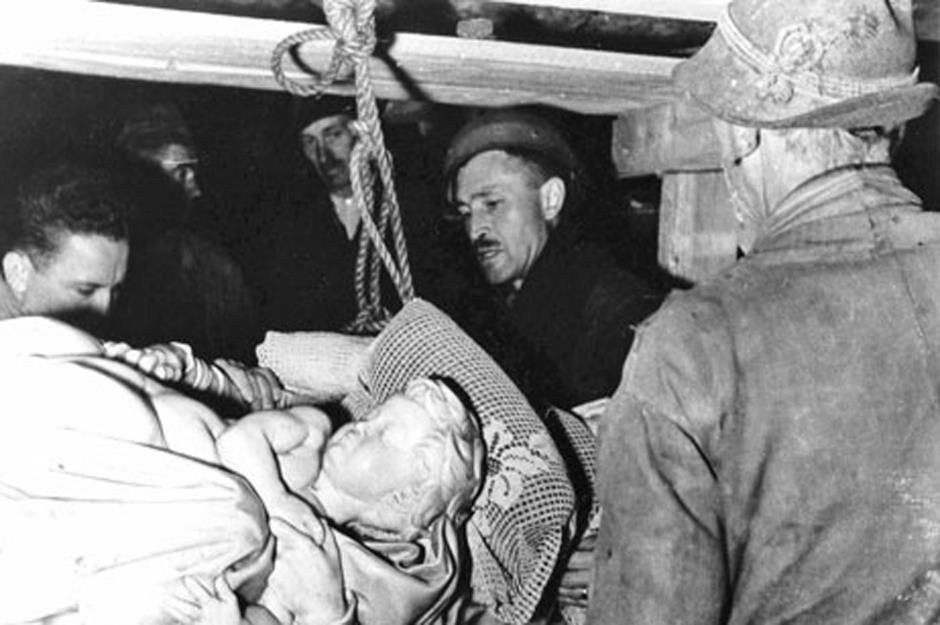 Bundesdenkmalamt Wien/Wikimedia Commons
In 1944, the priceless sculpture was audaciously stolen by retreating Nazi troops, who hid the artwork under piles of mattresses in a Red Cross vehicle. A year later, the Monuments Men discovered the Madonna and child in, of all places, an Austrian salt mine, and the sculpture was returned to its home in Belgium not long after.